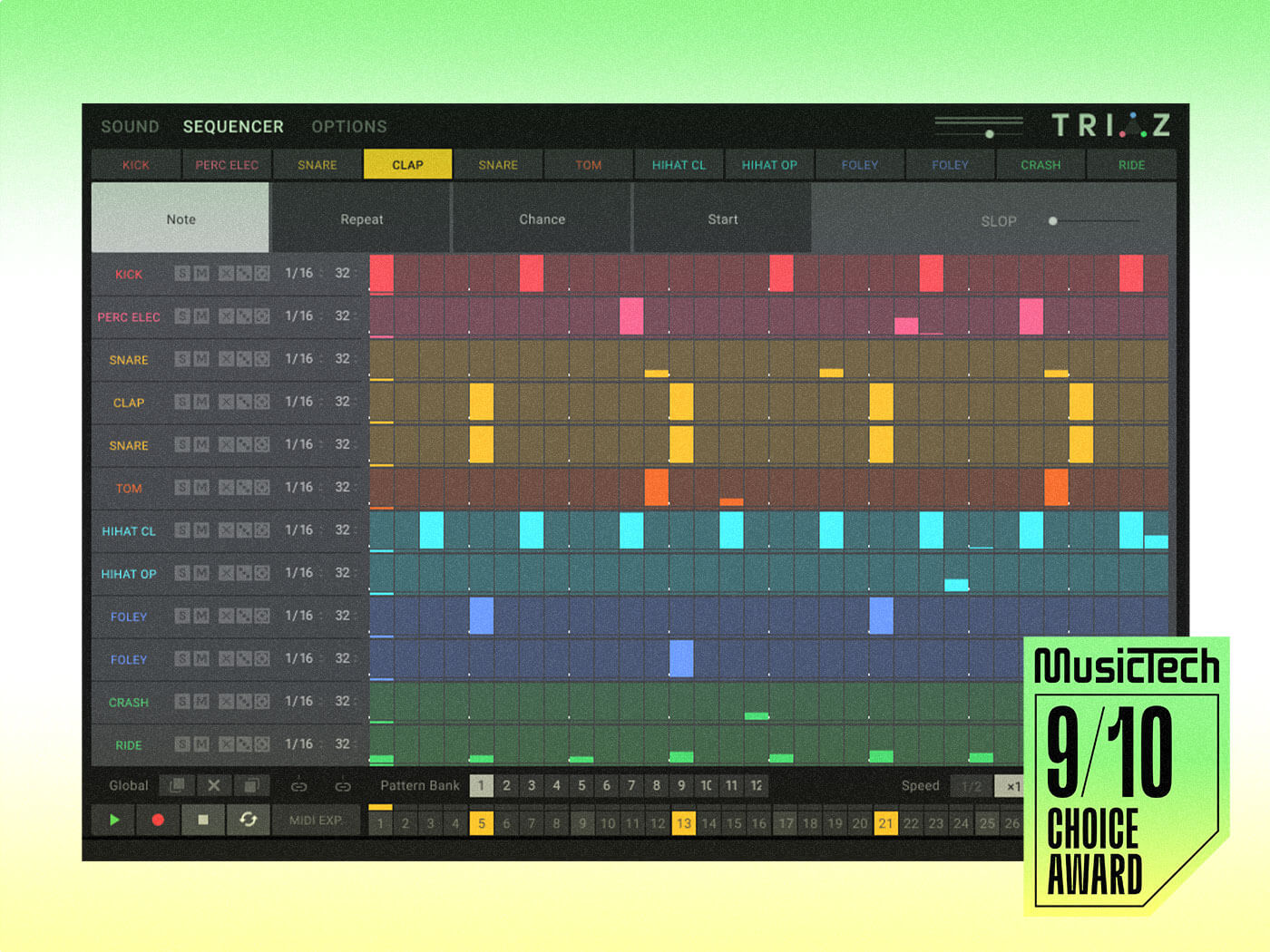 Building beats using loops, samples and plug-ins can be a joy. But sometimes, it’s more efficient to work with a drum machine with a focused workflow. Wave Alchemy has implemented its expertise and passion for crafting drum sounds into Triaz, a refined Kontakt instrument for easy beatmaking.

Triaz is a library of 10,000 drum sounds, percussion and sound design tools, which includes vintage and modern drum machines, acoustic kits, modular synths, found sounds and more. Its 12 channels each have three different layers into which samples can be loaded, which you can blend using an X/Y pad. The sound browser allows for extensive tagging, and you can also load in your own samples. If you’re feeling lucky, there’s a flexible randomisation system that lets you randomise a single layer, all layers in a channel, or the entire kit.

The layout is very intuitive, thanks to the colour-coded channels for each category and the main sound-editing screen, which changes dynamically as you select tracks. You can edit the layers as a whole or individually using detailed controls for the sample, pitch and filter, which include useful functions such as random panning and a Slop dial that adds subtle variations to volume, start position and filter cutoff. 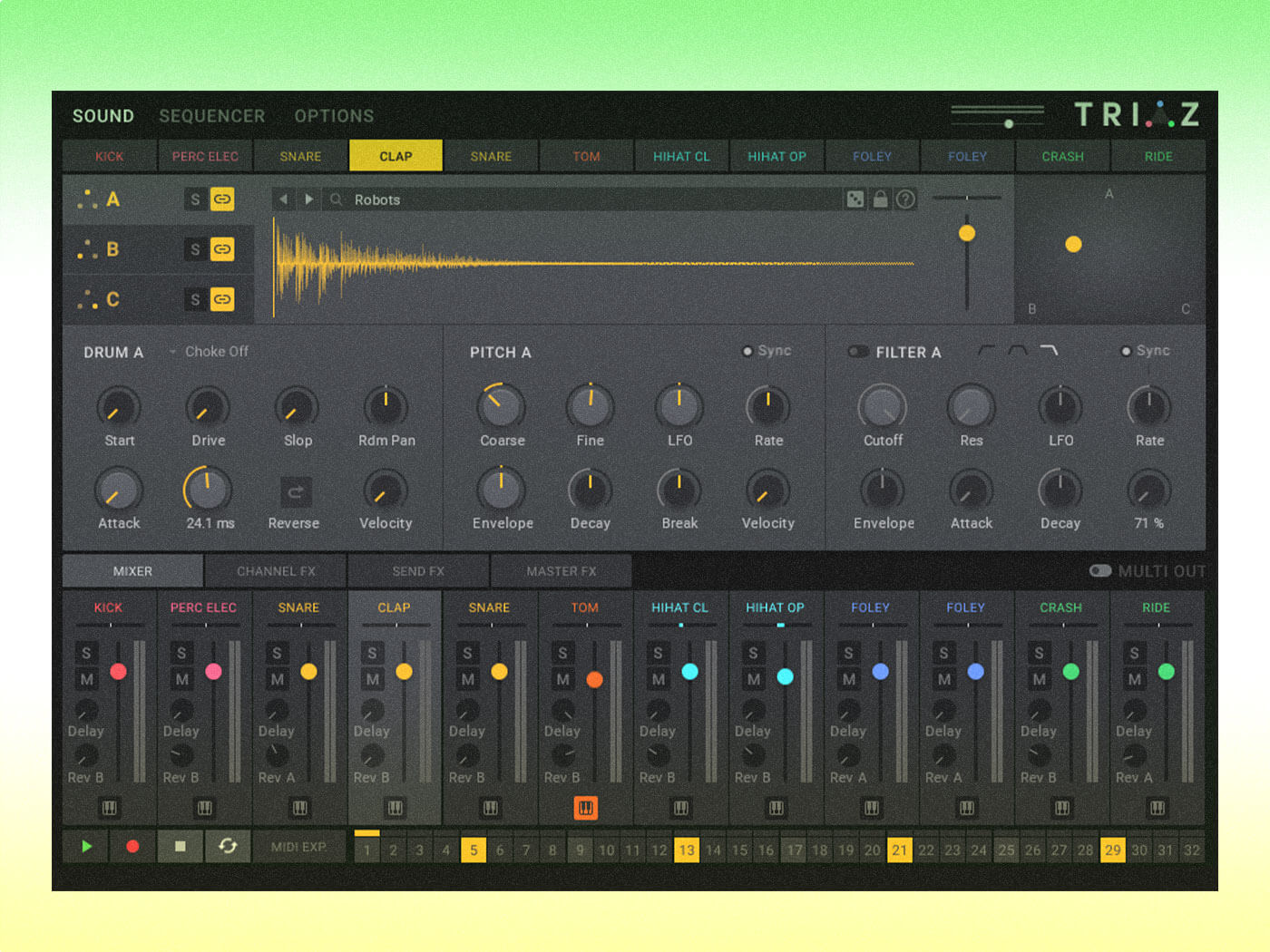 Triaz features tabs for the mixer (with two sends per track), channel effects, send effects and master effects. Channel effects include, compressor, transient designer, bitcrusher and stereo-widening controls. Triaz’ master effects include an EQ, compressor, tape saturation, an output limiter, plus an array of noise samples with which to add additional character. In the send effects, you get an algorithmic plate reverb, a convolution reverb with a tasty selection of 40 custom IRs, and a stereo delay. Overall, it’s a considered and intuitive system. Although, we did find flicking between layers while selecting sounds a little fiddly.

The other main page is the sequencer, which tabs for laying in notes with varying velocities, adding different fast repeats, changing the probability that a note will play, and altering the start trigger time to create more natural or wonky rhythms. You can also randomise individual lanes, add global humanising and swing, and even set the Playback Rate and Step Length independently, allowing you to effortlessly build up more complex, evolving polyrhythms.

There are up to 12 Pattern Banks in a kit, and you can export the MIDI to drag and drop into your DAW for further editing. It’s an easy-to-use sequencer for getting ideas down, and we were creating-crisp sounding and intricate beats in minutes. That said, we do miss the more extensive editing lanes of Wave Alchemy’s older Evolution Kontakt instrument, which allowed you to individually sequence pitch, filter, envelope, effects sends and more, as opposed to the option here to control pitch and filter via velocity. In fairness, this may complicate the streamlined layout though, and increase the CPU hit.

Whether you’re layering up acoustic percussion instruments or blending the sound of a toy gun with a booming 808, the superb Triaz library is a triumph, with a large variety of sounds that make it relevant for any genre. However, the best thing about Triaz is that it lets you get down to business quickly. The GUI has been carefully planned to offer a quick workflow, and it’s by far the most sophisticated Wave Alchemy instrument to date.