The Wasaphone MKII combines unusual styling with a very vintage tone. Mike Hillier goes lo-fi. Details Price £43 Contact via website Web www.wasaphone.com Amazon.co.uk Widgets Old telephones used to use carbon microphones to capture the signal. These microphones had a very limited bandwidth but were able to transmit the voice sufficiently well, and the limited […] 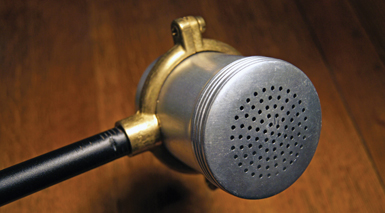 Old telephones used to use carbon microphones to capture the signal. These microphones had a very limited bandwidth but were able to transmit the voice sufficiently well, and the limited bandwidth was actually of use to the telephone companies, enabling them to fit more simultaneous calls onto the infrastructure.

When telephones were updated with more modern capsules, the old carbon-mic style limited bandwidth was retained, and even to this day telephone bandwidth is still limited, even on your flashy iPhones. 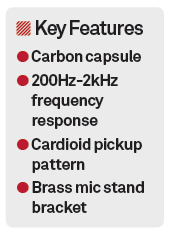 Retro Sounds
The Wasaphone MKII takes an old phone receiver and houses it in a recycled flour dredger (no, really!), with an XLR connection and mounting bracket. Handmade in Bristol, UK, the Wasaphone MKII certainly has an unusual DIY aesthetic to its visual appeal. The mounting bracket doesn’t allow for any angling of the mic, so positioning it can be a little difficult, although we found ourselves almost always mounting it vertically on a mic stand with no boom.

The capsule in the Wasaphone MKII has a very limited bandwidth – from 200Hz to 2kHz – creating an instant lo-fi, gritty sound. This makes it almost useless for any ‘normal’ mic’ing, but perfect as a special effect mic.

Take one discarded phone reciever, house in a flour dredger, and voila! Lo-Fi heaven on Earth.

We began testing by overdubbing a lo-fi male vocal onto an acoustic rock track. The Wasaphone gave the vocalist a dirty, blues-y sound, and as our singer was able to hear the effect in his headphones he was able to perform to the sound, wresting the last ounce out of his performance.

Encouraged by this we then plugged the Wasaphone directly into a guitar amp, which we in turn mic’d with a Heil PR 20 moving-coil dynamic, and tried another take. This time the amp added additional dirt to the signal, giving the vocal a more rough-around-the-edges vibe. In the mix we used the direct mic’d take as our primary vocal, blending in a little of the amped take as vocal doubles for extra emphasis on certain words 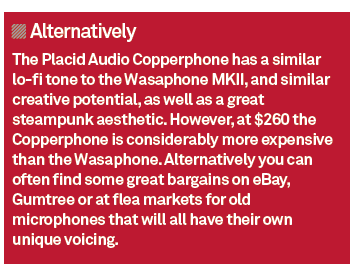 The two parts cut through the mix incredibly well, giving the track a grunge-like emotion. The second amped take adding extra energy, and really bringing emphasis to the distorted nature of the vocal.

Getting Creative
Next we set the Wasaphone MKII up alongside our PR 20 on the amp and recorded an electric guitar part with both mics. On its own the Wasaphone signal was surprisingly useful, and would fit in busier mixes quite well. But by blending the Wasaphone signal in with the more full-spectrum Heil mic we were able to push the midrange forward without having an obviously lo-fi sound or resorting to EQ.

Of course electric guitar amps are notoriously ‘lo-fi’ anyway, and the guitar will always respond well to unique and unusual sounds. On acoustic guitar the Wasaphone has a glorious vintage tone, which is reminiscent of 30s and 40s folk and blues recordings.

One trick we’re fans of is using a lo-fi mic placed between the kick and snare and crushed through a compressor, blended in with a full drum kit. We’ve used a variety of mics for this task, settling most recently on a Shure 520C bullet mic. With the Wasaphone MKII in this position we were able to get some fantastically grotty drum sounds, which really adds character to the kick and snare in a full mix.

Used on its own the Wasaphone MKII has a very obvious character, which it imprints on whatever you are recording. The sound is steeped in vintage tones and perfect for lo-fi or Americana styles, but is unlikely to be a first choice microphone. However, mixed in with other production styles it gives you something that just can’t be achieved with processing.

It is like using a real Instamatic camera, as opposed to using a filter on Instagram. You can come close to the effect in other ways, but by using the Wasaphone you’re likely to get more creative performances, not just creative results. In this studio, the ability to get to the creative space quickly is invaluable, and the Wasaphone MKII lets us do exactly that.

For live use this style of mic is incredibly useful, enabling you to get a lo-fi vocal tone with no effort. Instead of using pedals to get a lo-fi tone, and then hoping to solve the impedance headache, you can simply plug-in the Wasaphone MKII like any other mic 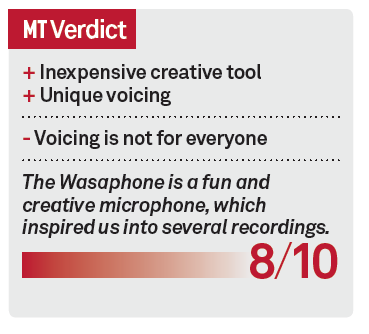