Modern recreations of classic units are more than just nostalgic strolls down memory lane. Mike Hillier fires up the latest blast from the past…    Details Price £499 Contact Nova Distribution 020 3589 2530 Web www.nova-distribution.co.uk Amazon.co.uk Widgets Every month there seems to be a new product based upon a classic design. Some of these merely take […] 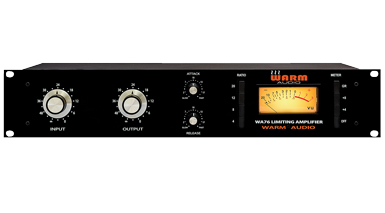 Modern recreations of classic units are more than just nostalgic strolls down memory lane. Mike Hillier fires up the latest blast from the past…

Every month there seems to be a new product based upon a classic design. Some of these merely take inspiration from pro audio’s illustrious past – a Neve-styled mic preamp here or a Pultec-inspired equaliser there – while others go the whole hog and appear as replicas of the original units. Warm Audio’s WA76 sits firmly in the latter camp, being a copy of the legendary Urei 1176 limiting amplifier, possibly the most often-used lead vocal dynamics processor in pop history.

Bryce Young, owner of Texas-based Warm Audio, obviously believes in offering classically-styled analogue hardware at affordable prices, as his take on the highly regarded API 312 preamps have found their way into the company’s WA12 and Tone Beast mic preamps, both of which received glowing reviews within these pages.

The WA76 is a single-channel, 19in rackmount 2U compressor/limiter. Like the original 1176 units upon which it’s based, the WA76 is a solid-state design utilising a Class A line-level output amplifier. Vintage-gear junkies will recognise the familiar features of the WA76: two large rotary pots for input and output, two smaller pots for attack and release, and a large VU meter flanked by two rows of push-buttons. It’s a solid, elegant design that’s much-loved for its functionality as well as its familiarity, both in terms of usability and sound quality.

Once Upon a Time…
Let’s take a little look at the history first. Bill Putnam, founder of UREI, began work on the FET-based 1176 in 1966 when solid-state technology was in its infancy. Putnam was already a pro-audio innovator having built the first mixing consoles that could be used in conjunction with multi-track tape recorders. When the original 1176 appeared in 1967 it quickly found favour in studios across the USA, usurping Universal Audio’s LA-2A levelling amplifier, often thought of as the 1176’s thermionic forefather. Over the years the 1176 went through several revisions, the most important of which was revision C, dating from 1970.

This revision employed new low-noise circuitry that reduced the noise floor by 6dB, and thereafter the units were renamed 1176LN (low-noise). Warm Audio has modelled the WA76 after revision D, arguably the best-sounding 1176 of all.

The input pot, which is a true 600ohm t-pad, controls the signal level entering the unit and it also controls the compression threshold – as the dial is turned up, more compression or limiting takes place. Incidentally, on the rear panel is an Input Pad button, which reduces the incoming signal by 23dB. This can be useful when using the WA76 in conjunction with a high-gain preamp that doesn’t have a user-adjustable output control, such as Warm Audio’s excellent WA12.

The output pot, like the input knob, is indented for precise recall of settings, and controls the final output of the unit, making-up gain lost from the gain reduction. This control also enables the user to determine the signal level entering any unit that appears after the WA76 in the signal chain.

The attack and release controls (both of which are continuously variable) feel just right, being neither too stiff nor too loose. Like all authentic 1176 variants, the WA76 is capable of extremely fast response times. At its fastest setting, the unit is capable of an attack time of 20 microseconds and even at its slowest setting compression kicks in at 800 microseconds, which is still quite fast. Release times are available from 50 milliseconds to 1.1 seconds. Four push-buttons to the left of the VU meter determine how firmly the unit reduces signal peaks, with four individual ratios available at 4:1, 8:1, 12:1 and 20:1.

Even the lowest ratio setting is fairly high compared to those offered by many compressors (1.1:1 is not uncommon), and the higher settings take the unit into limiting territory.

One of the best-loved features of 1176-styled compressors is the ‘All-buttons-in’ setting, where all four ratio settings are selected simultaneously. This is sometimes referred to as the ‘Four Button Trick’ or ‘British Mode’ and in effect delivers a ratio somewhere between 12:1 and 20:1. This setting affects the bias of the unit resulting in a change in the behaviour of the attack and release controls. Many engineers use this setting to process drum tracks, particularly on overheads or complete drum kit mixes. The unique compression curve created by this method adds a subtle musical distortion, particularly in the lower frequencies, that produces a huge punchy sound ideal for rock music.

Push it Real Good
The four push-buttons that are situated to the right of the VU meter enable the user to select what the meter displays as well as powering the unit on, or, in the case of the bottom button, off. When the top GR button is engaged the meter shows the amount of gain reduction taking place, while the following two buttons select output level metering.

The first of these is marked +8, meaning that with a VU meter reading of 0, the unit’s output level at the rear panel outputs is +8dBm. The next (+4) button is similar but with an output level of +4dBm. The final button is simply an off switch.

There are two sets of outputs on the rear panel enabling both balanced XLR or balanced TRS connectors (these may be used simultaneously). The rear panel also houses a connector for the supplied 24V AC power transformer.

Although this type of power transformer is not the last word in fidelity, it does help to keep down costs so that what you pay for is the quality internal components, ie, the bits that really matter. The input and output transformers are high-quality USA-made Cinemag devices – direct descendents of the Reichenbach transformers used in the original 60s and 70s models.

A quick look inside the unit reveals a very neat and well laid-out design with the distinctive Cinemag components clearly identifiable, and the absence of an internal power supply makes the unit surprisingly light. 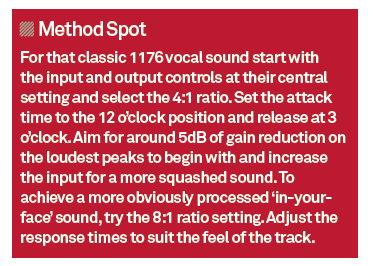 Sound Design
So, the WA76 certainly looks and feels like a traditional 1176, but does it possess that classic Urei sound? In a word, yes; the magical bright, explicit sound is present and correct. Of course, there will always be golden-eared aficionados who will detect minute differences in character, even between vintage machines with an identical revision status.

However, the unmistakable sonic qualities of the design will be familiar to anyone who has used any good quality, on-spec 1176 variant. Strapped across a lead vocal the WA76 added that classic forward, spot-lit sound that is a large part of the unit’s appeal. In fact this brightness, which is like a broad-but-gentle presence boost, is often employed without any gain reduction purely for its flattering tonality.

When compression is applied, the unit produces a slight edge that helps vocals cut through a mix, especially when driven hard. Although 1176s are primarily renowned for vocal processing (engineer Bruce Swedien always used one on Michael Jackson’s vocal tracks), the unit is equally at home processing instruments such as electric guitar and bass. 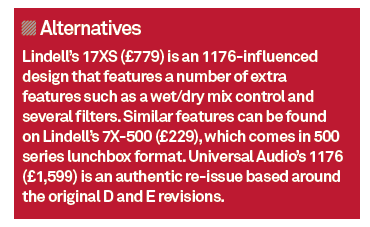 During the review process we used the WA76 to great effect on bass using the 12:1 ratio to tame the loudest peaks while retaining some dynamic movement during the rest of the performance. We also tried some heavy processing on an electric guitar track, using very fast response times to blunt the transients and give a nice thick, meaty sound.

We couldn’t resist trying the all-buttons-in trick on drums, and so pulled-out our simple three-mic, mono drum mix of an old 60s Slingerland kit that we often use when testing single-channel units.

Experimenting with response times we were able to craft some fabulous sounds, ranging from solid and fat (or should that be phat?) to the sort of surging, pumping sounds heard on many late-60s and early-70s classic rock recordings.

Although we didn’t have an original 1176 with which to compare the WA76 side by side, the signature sound was unmistakable. A visiting engineer to our studios brought along his (considerably more expensive) boutique version of the design and the difference in sound was negligible.

This new take on the 1176 is a wonderful addition to Warm Audio’s expanding catalogue of excellent, affordable analogue hardware. While we here at MusicTech applaud the ever-increasing quality of digital simulations of classic gear (in the form of plug-ins), we are delighted that true top-drawer analogue sound quality is now becoming available at almost giveaway prices. Warm Audio’s WA76 must rank as one of the greatest analogue bargains in living memory. 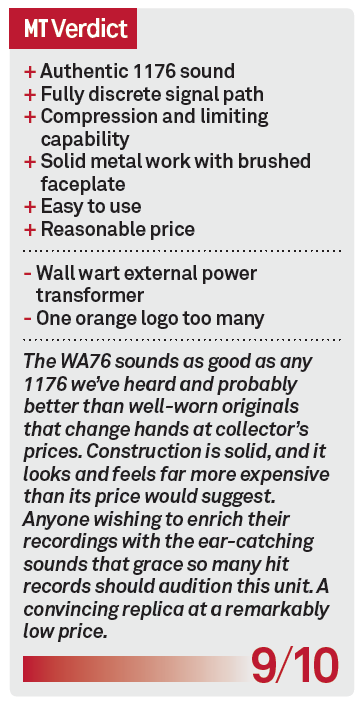 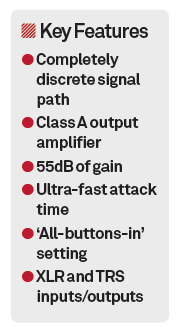