An emulation of the channels from one of Neve’s most revered British consoles, the WA273-EQ is a modern mic-pre with a vintage heart, as John Pickford reveals Price £1499 Contact Nova Distribution | www.warmaudio.com | www.nova-distribution.co.uk | 020 3589 2530 WA273-EQ key features: 80dB gain – resister stepped gain switch  UK made Carnhill transformers  UK made Blair […] 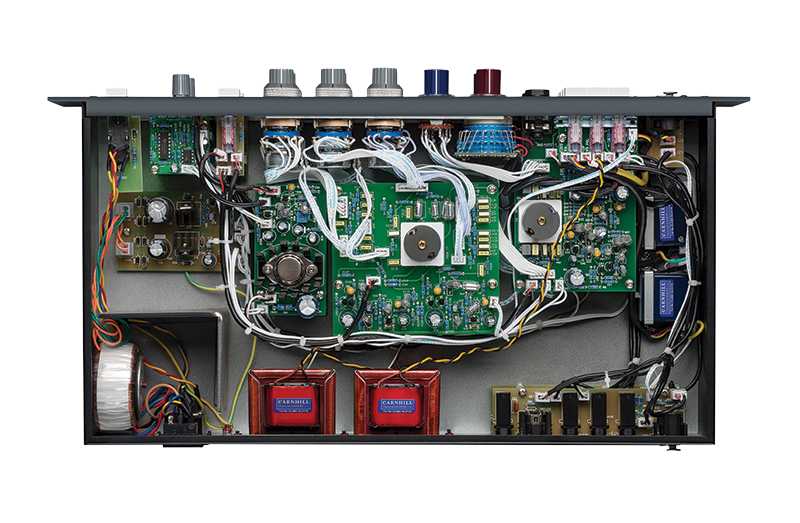 An emulation of the channels from one of Neve’s most revered British consoles, the WA273-EQ is a modern mic-pre with a vintage heart, as John Pickford reveals 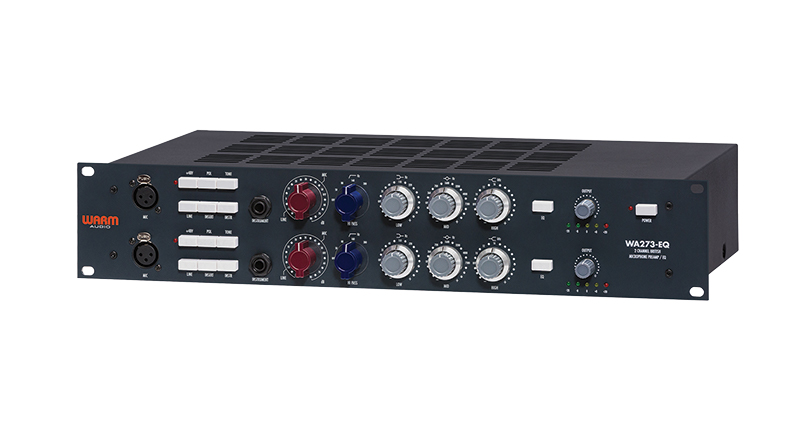 Hot on the heels of Warm Audio’s four-channel WA-412 microphone preamplifier – reviewed last month – comes the WA273-EQ, a copy of the vintage Neve 1073 module. While the WA-412 is based on the 312 schematic found in classic American API consoles of the 1970s, the WA273-EQ is an emulation of the channels found in Neve’s most revered British consoles from the same era.

The Neve 1073 has been emulated probably more than any other mic-pre and I’ve tested quite a few of them. Last year I reviewed Neve’s own reissue of their classic module, the 1073 SPX, and found it to be one of the very best solid-state preamps I’ve heard to date. Now, Warm Audio expand their line of vintage hardware replicas with four units based upon the 1073. The range comprises two single-channel and two dual-channel units, one of each featuring an equaliser.

The unit on test here is the dual-channel with EQ version. However, my comments on its performance are also relevant to the other models in the range. A 2U 19-inch rackmount unit, the WA273-EQ certainly looks the part, with those instantly recognisable Neve-style pots and a similar layout to the currently available 1073 SPX. Only the horizontal arrangement of the push-button switches identify it as a near clone of the real McCoy, while putting the unit to use reveals the red input knob to be a conventional gain control rather than adopting Neve’s idiosyncratic mic/line gain configuration.

Connectivity is comprehensive, with microphone inputs on both the front and rear panels and instrument inputs on the front panel, while the rear panel also has balanced line outputs (XLR and TRS), send and return inserts and line inputs. The signal from this line input is routed through the entire preamp circuit, including both transformers (as per the mic inputs), while the inserts connect another processor into the circuit after the input transformer and initial gain stage.

The British-made input and output transformers are custom built by Carnhill and, like classic 1073 preamps, the WA273-EQ is hand-wired and assembled, with a pure Class A signal path throughout. Tantalum and polystyrene capacitors are used to ensure this modern ’73-style circuit is as close to the original design as possible.

Front panel controls include the aforementioned input gain knob, which is a 22 position stepped switch allowing a maximum 80dB of gain for microphones as well as line and Hi-Z DI sources. An output level control is provided to ensure that the signal does not overload the input of your recording interface or any other piece of equipment used in the signal chain. It also allows for driving the input gain harder to produce more colouration from the preamp and to inject a subtle degree of analogue saturation.

All four of Warm’s current ’73-style range feature a four-position inductor-based hi-pass-filter, which provides an 18dB per octave slope switchable between 50Hz, 80Hz, 160Hz and 300Hz. I always appreciate the inclusion of a HPF on mic-pre’s – even on stand-alone preamps that don’t form part of a channel strip – finding them invaluable when recording strummed acoustic guitars and top-heavy percussion such as tambourines and shakers.

Speaking of filters, the EQ on old Neve consoles is just as revered as the preamps and the three-band equaliser on the WA273-EQ does not disappoint. The controls themselves are high quality switches/pots made by Blore Edwards, described by Warm as a ‘dual concentric’ design, with the outer band performing as a frequency selector switch while the centrally placed pot provides boost or cut. Both low and high frequency sections offer +/- 16dB of shelving EQ, while the midrange is a peaking EQ with a fixed Q. See Key Features for the frequency points available.

Rear panel connectivity includes microphone XLR and TRS line inputs along with balanced outputs (XLR & TRS). There’s also a ground lift switch and an insert (send and return) to allow a compressor or any other unit to be inserted in the middle of the unit’s circuit.

The WA273-EQ arrived at the same time as Warm Audio’s WA412, reviewed in last month’s issue. It was interesting to compare the units side by side as each has distinct, though quite different characteristics. While the ‘412 is punchy and mid-forward with a lightning-fast transient response, the ’73 sounds bigger and beefier with more low-end heft and a glossier top-end. To use a classic car analogy, if the API is a Ford Mustang – muscle-bound, edgy and quick off the mark – then the Neve would be a Bentley; big, relaxed and effortlessly graceful.

With the unit fully warmed up (no pun intended), I recorded some acoustic guitar using an AKG C414 condenser mic. Beginning the audition with the Tone switch disengaged, the sound was full and weighty with a clear, extended treble response. Having used the same mic and guitar through the WA412, the present unit sounded almost scooped in the midrange by comparison.

It was only when the test was repeated with my reference Earl Bird valve mic-pre that I realised the WA273-EQ isn’t scooped. I was merely missing the accentuated mids of the API copy.

Switching in the Tone control, lowering the unit’s impedance from 1200 ohms to 300 ohms, the sound smoothed out noticeably, retaining the depth in the low-end while adding some warmth to the midrange. The treble also seemed a little less exposed and obvious, the whole sound becoming more cohesive and, dare I say it, Neve-like. Although Warm recommend the 1200 ohm setting for condenser mics, with the 300 ohm setting better suited to ribbon and dynamic mics, I consistently preferred the WA273-EQ set to 300 ohms.

1073 style EQ is a wonderful thing and this aspect of the unit’s performance is faultless. Anyone who has used the EQ on a cheap mixer – especially when boosting – will know how thin and nasty the results can be. Boosting at 16kHz on vocal tracks is sublime, as I discovered while using the WA273-EQ for the session’s vocal overdubs. Usually I use a Pultec-style valve equaliser for this type of audio sweetening but I was completely satisfied with the air and space the ’73 provided.

The WA273-EQ is an excellent all-round microphone preamplifier with a sublime equaliser. It does possess a healthy dose of the classic 1073 sound beloved of engineers for decades. However, it lacks that last smidgen of cohesiveness that makes the genuine Neve 1073 units available today so wonderful. Maybe it’s because Neve are able to employ the superb Marinair transformers exclusive to their units.

Other 73-style units, such as Golden Age Project’s PRE-73 range, offer similar levels of vintage Neve sound for less money. However, they don’t look or feel like a real 1073 as this Warm Audio unit does. Perhaps the WA73 range is the perfect option for those who can’t stretch to the considerably more expensive Neve 1073, yet want a high percentage of the performance at a fraction of the price.

In this digital day and age, the addition of a first class analogue microphone/line/ DI preamplifier to your DAW is invaluable, no matter how good your interface is. The only consideration is the sonic character that serves you best. The Neve sound is legendary and can be heard on thousands of recordings. Smooth, meaty and larger than life, the WA273-EQ offers a great deal of the genuine 1073 sound at less than half price of the genuine article. Two channels are always handy, and indeed necessary for stereo sources, particularly if you wish to make use of the wonderful EQ section to sweeten your final stereo mix. Warm Audio have a solid reputation in the world of authentic re-creations of classic kit and the WA273-EQ (along with the other single & dual channel ’73 units the company offer) is a great choice for analogue amplification of all audio sources. 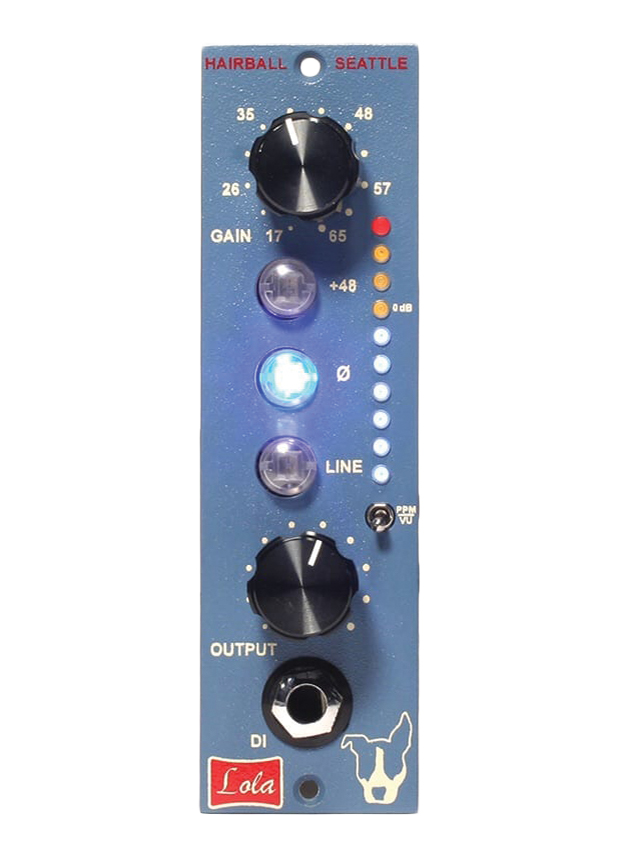 A 1073 style pre-amp in 500 series format, available as a kit or ready built. It gets remarkably close to the legendary Neve sound and is a real audio bargain if you particularly relish the prospect of assembling one from a kit of parts. It doesn’t have an EQ section though.

Featuring Neve’s exclusive Marinair transformers. It’s the real deal, with the authentic 1073 EQ section and is among the best solid-state microphone preamplifiers ever created.