Can Warm Audio really bring one of the most sought after microphones down to mortal budgets? Mike Hillier feels a chill coming. 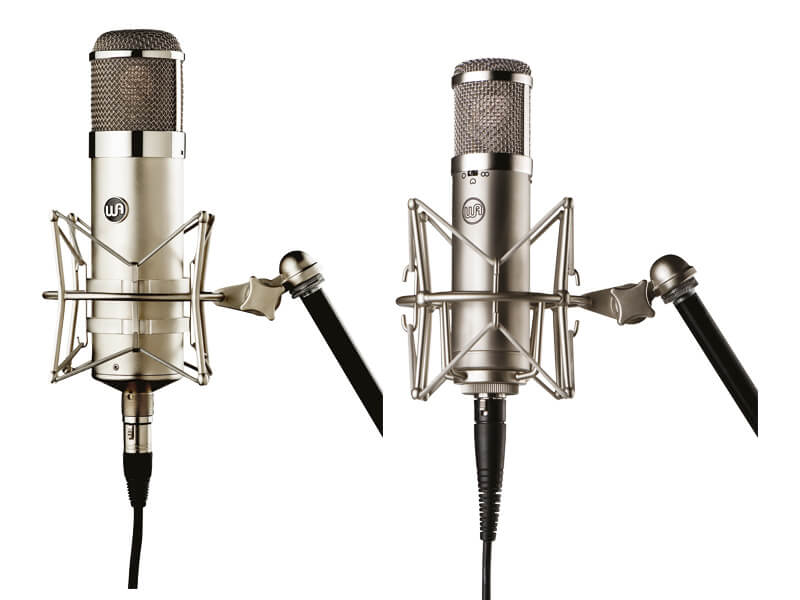 It came as something of a surprise when Warm Audio announced it was going to be launching a pair of microphones based on the legendary Neumann U47.

This classic has long been regarded as one of the most sought after microphones in the world, and while Warm Audio would hardly be the first company to build a new microphone based on this treasured model, they are one of the few companies building on a scale and economy that would bring this revered sound into the project studio.

On top of this, Warm Audio were announcing not one, but two microphones – one valve-based and another FET-based. Could Warm Audio perhaps be reimagining both the classic U47 valve microphone and it’s younger sibling the U47 FET?

Both microphones are based around Warm Audio’s custom K47-style capsule, the WA-47-B-80v, developed in Australia. The capsule has apparently been manufactured to vintage specs, with the same hole pattern and frequency response.

U47 aficionados will already have spotted that this is a recreation of the K47/49 capsule (the distinction between the K47 and K49 being irrelevant with modern parts tolerances), which didn’t debut on the U47 until 1960, rather than the original U47’s M7 capsule.

The two capsules are quite different, the slightly smaller M7 using a PVC diaphragm glued to the backplate compared to the K47’s Mylar diaphragm clamped in place using a ring mount. The overall tone of both capsules is similar, but not identical. In the end though, either capsule can lay claim to being part of the authentic U47 sound.

Initially, the U47 used a Telefunken VF14M valve, a military spec pentode long since discontinued, and later replaced by a Nuvistor. The discontinuation of the VF14 valve led to Neumann developing the U47 FET, a solid state microphone built around the K47 capsule. For the WA-47, Warm Audio has opted to go an entirely different route, pairing the K47-style capsule with a JJ Sovtek 5751 double triode valve.

Essentially, this is a low gain 12AX7 valve, quite different to the VF14M, but not the first time such valves have been used in U47 style microphones. However, for those on the hunt for an authentic U47 experience, Telefunken has developed a new VF14 valve, which it pairs with a recreation of the M7 capsule in the current Diamond Series U47 microphones. 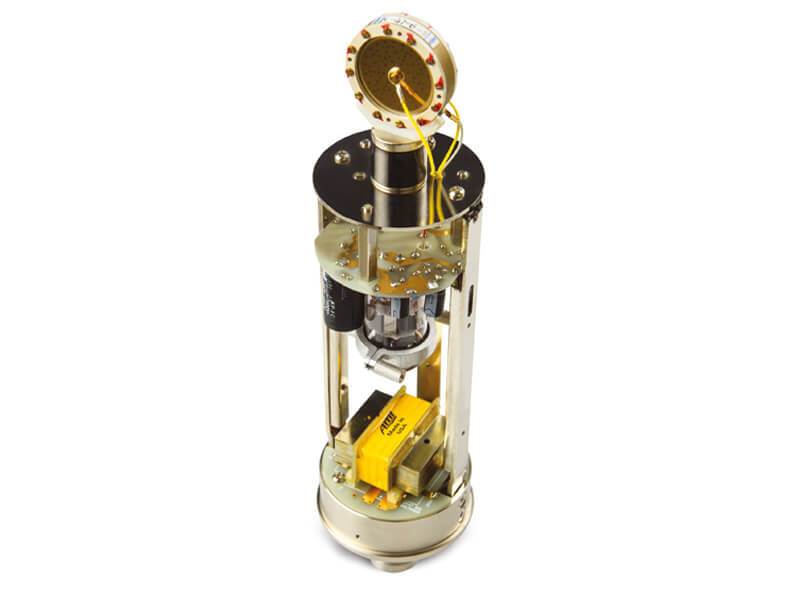 The final piece of the puzzle in the WA-47 is the AMI output transformer. No information is provided on how accurately this matches up to the original BV8 transformer, but AMI has made some exceptional reproductions in the past so there’s no reason to think this should be any different.

The WA-47jr does away with both the valve stage entirely, replacing it with a solid state FET stage, as in the U47 FET, however, it also does away with the transformer output, which is part of the key to the U47 FET’s big sound.

It is clear then that the WA-47 is not a simple clone of the Neumann U47, and similarly the WA-47jr is not a clone of the U47 FET. Instead these are two modern microphones inspired by the best of a previous generation, and hopefully offering something of the tonal qualities provided by those mics – and at a significantly lower price.

Taking the WA-47 out from its box ready for testing revealed that the package contains the power supply, spidershock mount, 5m Gotham Audio 7-pin XLR cable and the mic itself in a wooden storage case. There’s no sturdy flight case, which on a mic of this class is a little disappointing, but probably won’t impact the decision making of any prospective project studio owners looking at using this as a primary vocal mic.

The WA-47 offers a nine position pickup pattern switch on the power supply. Basically this combines the functionality of the Neumann U47 and its sibling the U48 into a single,all-in-one microphone.

Our first impressions with the WA-47 plugged into our LA-610 preamp, left us picking our jaws up from the floor. From the opening take it was clear that this mic was something more than just another generic 47-style tube mic. The bottom end was simply enormous, prompting our vocalist to exclaim, “I’ve found the mic for me” almost immediately.

The nods in the direction of the Neumann U47 are entirely warranted. This is a big, thick, larger than life sound. With a fair amount of compression applied the resulting tracks sat on top of our mix, above the bed of instrumentation with little to no EQ necessary. There’s no built-in hi-pass filter, so you will have to be careful with rumble and sub-harmonic build-up, but this is easily dealt with at the preamp stage, or later.

On electric guitar cabinet, the WA-47 signal was earth-shattering. With the amp’s natural slightly overdriven tone, the dynamics of the guitar sang, but once we engaged our Big Muff, the bottom end came to life, exploding out of the monitors. Tones this big don’t often fit into dense mixes well, but when there’s a little more space in the mix, it’s great to have the opportunity to open up the guitar.

Switching the mic from cardioid to omni resulted in a fairly noticeable push of the mid-range. The top and bottom end of the signal was held back, giving the vocal a distinctive, but quite useable flavour. In a well-treated space this would make for an excellent alternative voicing, but in more reverberant spaces, it could bring up too much room tone. However, since you can dial in any of three further positions between cardioid and omni you could really dial this in to taste and to the space you have available.

Switching the pickup pattern knob in the other direction brings up the figure-of-eight mode. In this position the mic didn’t feel as obviously different from the cardioid position as it did in omni. The bottom end was all there as before, and if anything the mid-range felt a great deal smoother, and was less noticeably coloured.

There really is very little reason not to want to get your hands on the WA-47. It’s inexpensive and sounds like it’s worth a million dollars. Not many of us will ever be able to afford a real Neumann U47, and while this might not be quite the same, it does put you in that ballpark.

The WA-47jr serves as a great multi-purpose microphone. If your mic cabinet is a little bare, this is going to open up a world of recording possibilities. But if you already have a couple of versatile multi-pattern condensers, consider saving for the WA-47.

Like the WA-47, the lower spec WA-47jr also comes nicely-packaged in a foam filled box that contains the microphone, shockmount, an additional hardmount and a carry pouch.

Switching out the WA-47 entirely for the WA-47jr was an underwhelming experience. The WA-47jr has none of the instant gravitas of its valve sibling. On vocals the WA-47jr has a slightly nasal upper mid-range, and the huge bottom end of the bigger WA-47 is completely missing. Rather than being instantly wowed, we were grabbing for our patch cables to put an EQ across the signal.

This is not to say the WA-47jr is a bad mic. And the U47 FET doesn’t sound at all like it’s older sibling either, often being used for kick drums, bass guitars and various other low-end duties. However, the WA-47jr doesn’t really fit this function either, lacking the weighty bottom end present in the U47 FET.

The WA-47jr is more similar to a variety of utilitarian inexpensive large-diaphragm condensers that have passed through our hands, and because it has three pickup patterns it is actually more versatile than many of those others. In addition the WA-47 has, unlike it’s more expensive sibling, a built-in high-pass filter and 10dB pad.

If you were looking for an inexpensive multi-pattern large-diaphragm condenser with a fairly open voicing, this is a great example. But don’t go in expecting a mic with anything like the qualities of either the WA-47 or the U47 FET.

If you want the real thing, this is it. It’s considered a classic for a reason – but expect to pay through the nose for it. The Telefunken U47 uses the original M7 capsule paired with a new VF14 valve and a BV8 transformer. You could buy eight WA-47s for the price of a single one of these though, and still walk away with change. So, this is firmly for those who feel like they really must have the real thing.

If you were considering using the WA-47jr as a versatile multi-pattern condenser, the Aston Spirit provides the same three polar patterns in a British manufactured mic with a cool, distinctive look. It’s a credible alternative – and a shade cheaper.