Incredibly, Warm has managed to launch its first EQ and land an instant classic – and, what’s more, it’s actually affordable. John Pickford investigates… Details Price  £649 (including VAT) Contact Nova Distribution 020 3589 2530 Web www.warmaudio.com Amazon.co.uk Widgets Hot on the heels of the Urei-inspired WA76 liiter, which impressed us a few months back, […] 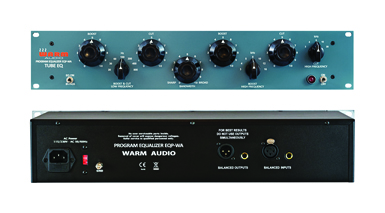 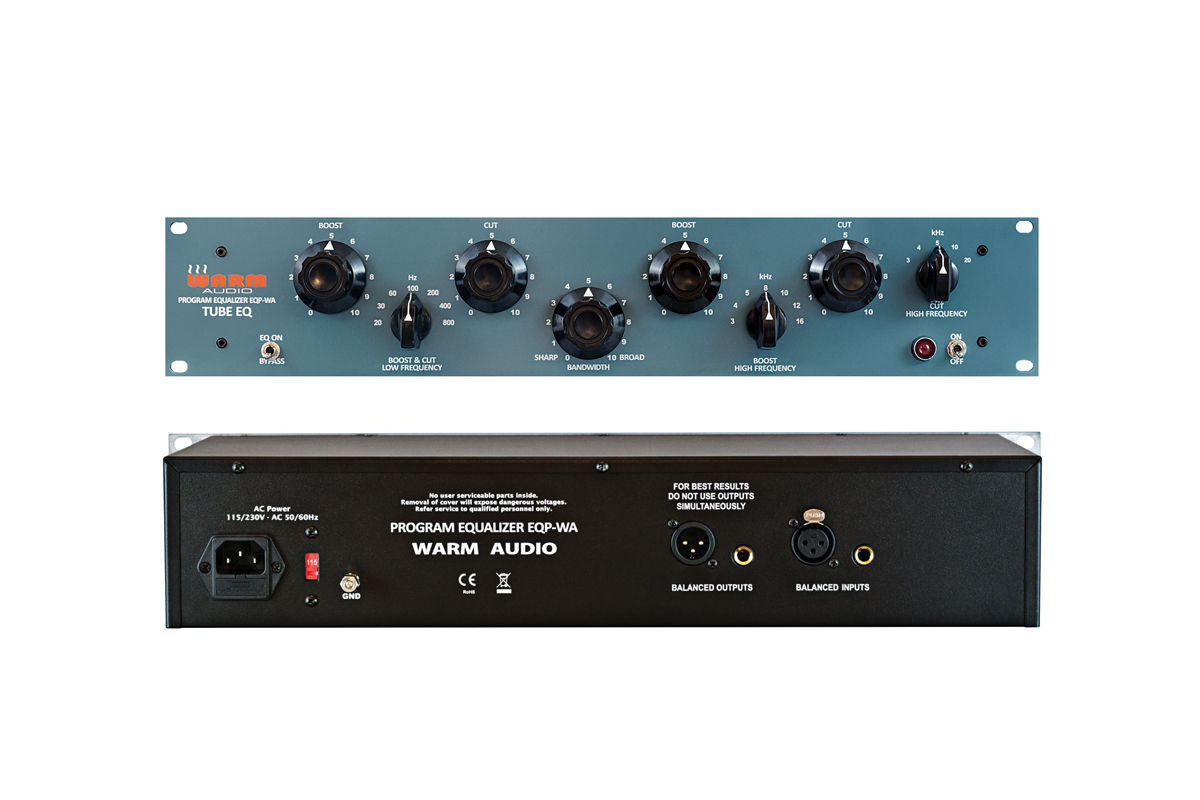 Hot on the heels of the Urei-inspired WA76 liiter, which impressed us a few months back, Warm Audio has turned its attention to what is arguably the most iconic equalizer of all time: the Pultec EQP-1A.

Check out Studio Icons for the full EQP-1A story. Bryce Young, CEO of Texas-based Warm Audio has been causing a stir within the world of analogue outboard gear by offering excellent high-quality equipment at bargain prices. And now the company is really living up to its name with this, its first foray into valve land.

The EQP-WA Tube Amplified Program Equalizer, to give it its full name, is a single-channel 2U rack-mount unit based upon a design that’s now over 60 years old. The original Pultec design remained in production for almost 30 years and has been copied numerous times – however this new model isn’t a direct clone, although its vintage styling gives it that familiar Pultec look.

The old units were 3U high behemoths but Warm has managed to slim it down by one third, while offering some additional frequency settings, both in the low-end and the high-frequency Cut control. The unit’s Cut control was named Atten (attenuation) on original models and, in a further nod to modernity, the ancient CPS (Cycles Per Second) nomenclature has been replaced with Hz and kHz.

As a Program Equalizer, the EQP-WA excels when processing wideband material such as sub-groups and complete mixes, as the nature of the unit is to provide musical tone-shaping rather than forensic corrective EQ. Of course, the unit is not limited to this style of operation and all manner of solo instruments and voices can benefit from its sweet sonic enhancement.

Audio can also be improved by passing a signal through the unit without the EQ switched in, allowing the transformers and valve amplifier to warm (no pun intended) sounds, adding rich harmonic enhancement, particularly useful when dealing with sterile digital stems.

There are three distinct sections of this equalizer comprising low-end shelving Boost and Cut, boost-peaking high-frequencies and high-frequency shelving cut. The Low-Frequency control section offers seven selectable frequency bands at 20, 30, 60, 100, 200, 400 and 800Hz. The old Pultecs, and most other copies feature just four bands from 20 to 100Hz, so this new model has additional control for the lower mid-band.

Up to +12dB of shelving boost and -18dB of cut is available and because the Q shape of the Boost and Cut controls differ slightly, it’s possible to use these controls simultaneously to create interesting equalization curves. This method is known as the ‘low-end trick’ (see the Practical Tip box) and has become one of the best-loved features of this type of equalizer. When, for example, boost and cut is applied with 100Hz selected, the low-end boost is accompanied by a droop in the mid-range, around 1kHz. During the 1960s, Tamla Motown processed their many hit recordings with this type of EQ, scooping out some mids from backing tracks to allow the vocals to sit nicely in the mix.

The High-frequency control comes in two sections. The Boost control provides seven frequency points at
3, 4, 5, 8, 10, 12 and 16kHz, exactly mimicking the classic units, with +18dB of available boost. As this is a peaking EQ, a bandwidth control is employed to adjust the contour of the EQ curve from sharp to broad. The HF shelving Cut control has five selectable frequencies at 3, 4, 5, 10 and 20kHz; the first two frequency points are additional to the original design.

Practical Tip
For a great bass drum sound perform the legendary low-end trick of boosting and cutting simultaneously. Select 30Hz and dial-in equal amounts of boost and cut until you hear the low-end gain weight while the boxy mids are reduced.

The high-frequency section at 3, 4 or 5kHz will bring out the click of the beater and a touch of extreme top cut produces a beautifully rounded bass drum sound.

Inside the Box
Internally, the fully-discrete unit features a vacuum tube make up gain amplifier, which employs two high-voltage Tung-Sol valves (tubes): a 12AX7 and 12AU7. Warm has sensibly avoided using a valve rectifier as the Pultecs did; purists may bemoan this, but the truth is that solid-state rectifiers are much more efficient than tubes, and arguably allow the unit to perform better. Input and output transformers, along with the inductor, are by the ever popular CineMag brand.

On the rear of the unit is a connector for an IEC power lead (supplied), along with balanced Input and Output connectors that support both XLR and quarter-inch TRS jack cables. Warm recommends that it’s not advisable to connect both input connectors or both output connectors at once.

Straight out of the box we were impressed with the feel of the unit, which oozes quality. The large vintage-styled pots are smooth in operation and finely indented for precise recall of settings, which is particularly useful when using a pair, as we did, for stereo processing. The chicken-head type rotary switches that allow selection of frequencies engage with a satisfying clunk that feels purposeful and inspires confidence.

Even the powered-up LED glows a gentle red that doesn’t dazzle like many units that opt for neon-blue indicators. Only the Warm logo is a blot on the unit’s faceplate. On the company’s earlier orange units (WA12 and Tonebeast) the logo looked funky in black – however, on this lovely grey-blue unit, the brown logo is unfortunately reminiscent of a steaming ****.

So, logo aside, the EQP-WA looks and feels the part, but how does it sound? We were able to compare the unit with our well-loved Tube-Tech PE 1C Pultec copy, which has seen constant use in our review studio for almost 20 years. After a 30-minute wait for it to warm up, it was obvious that the EQP-WA is the real deal, possessing the weight and warmth we expect from the low-end boost, and the silky highs from the extreme top-end settings. Dialling-in similar settings on both the Warm and Tube-Tech units confirmed that designer Bryce Young has got the classic sound spot-on.

Admittedly, we had high hopes for the unit as we were impressed enough with Warm’s WA76 – their 1176 limiter copy – to buy a pair for our studio. However, we’re in valve land now, which is previously uncharted territory for the company. Even with great expectations we were blown-away with the unit’s performance; how Warm can manufacture a unit of this quality at such an absurdly low price is nothing short of astonishing.

We made many of our tried and tested EQ moves with the unit – a touch of 10kHz sparkle on snare drum, some 16kHz air on vocal tracks, and a subtle 60Hz boost on bass guitar to name but three – as well as making use of the extra frequency bands not featured on traditional units. The 800Hz setting in the low-end section was excellent at giving some body to an electric guitar track and we further tailored the sound to add some bite and presence at 3kHz. As a final touch we cut some extreme top at 20kHz where very little useful electric guitar information exists, creating a big, full-bodied sound that was still able to cut through the mix. 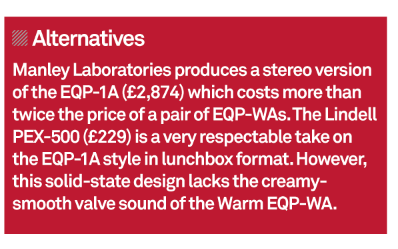 As we usually work in stereo, we couldn’t resist strapping our two EQP-WA review units across some stereo mix-busses and previously prepared final stereo mixes; the results were superb. This is something we’ve been unable to do with our single Pultec copy, unless we processed each channel separately, but now we can see why this type of equalizer is so revered as a program equalizer.

With many Pultec clones costing several times the asking price of Warm’s new version, owning more than one is beyond the reach of many smaller studios. Now it’s possible to have a pair for less money than any of the single-channel boutique units. With that in mind, the question we found ourselves asking wasn’t, “can we afford to buy both of these?”, rather “can we afford not to?”

Don’t make the mistake of thinking that the low price of the EQP-WA equates with low quality. This new Warm product can hold its own in comparison with any Pultec-styled EQ. The ability to perform all the tricks of these units coupled with the advantage of additional frequency points surely makes this a first among equalizers 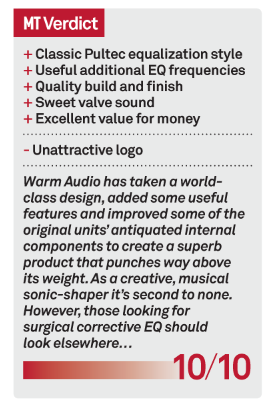