Another classic piece of 1960s kit is cloned – and John Pickford is on hand to see if it’s a warm sound that we need in 2016…   Details Product WA-2A Optical Compressor Price £799 Contact Nova Distribution – 0203 589 2530 Web www.warmaudio.com Texas-based company Warm Audio has made quite a name for itself […] 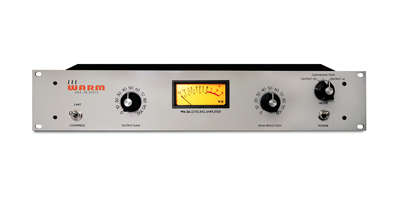 Texas-based company Warm Audio has made quite a name for itself producing superb, affordable clones (or close copies) of classic hardware. Aside from the WA-2A its Urei 1176 clone, the WA76, impressed me enough to invest in a couple for our review studio. Similarly, Warm’s EQP-WA compared favourably with the studio’s own, considerably more expensive, Pultec copies. Now, Bryce Young – Warm Audio’s main man – has turned his attention to the legendary Teletronix LA-2A Leveling Amplifier, which first appeared in 1962.

This optical tube compressor is the company’s second foray into valve land and, like its other units, makes use of modern, premium-grade components to reproduce the authentic tone and characteristics of the original, vintage units. Input and output transformers are from the highly regarded CineMag brand, while Tung-Sol and Electro-Harmonix manufacture the valves, or tubes as our transatlantic friends would say.

Two 12AX7s and a 12BH7 are employed, the same types as found in original units; however, a 6P1 miniature power valve is used in place of the original’s 6AQ5, which is now a rare valve. New Old Stock (NOS) 6AQ5s are available, however, so Warm has provided a suitable socket adjacent to the one holding the 6P1 for those who value authenticity above all else.

While we’re talking tubes, it’s worth mentioning that they do generate heat, so a gap of an inch or two should be left above the unit for ventilation when rack-mounting.

While the transformers and valves contribute a great deal to the unit’s sound, the compression character is defined by the T4B optical gain-reduction module, which operates by mating pairs of photo-resistors with an electroluminescent panel. The panel is driven by the unit’s audio sidechain, becoming brighter as transient peaks increase in volume.

Optical compressors are known for their smooth response characteristics and none more so than the classic LA-2A design. The unit’s attack time is fixed at 10 milliseconds while the release time is a more complex, multi-stage response; the first half of the release time is 60ms, while the following stages of recovery take between half a second and five seconds, as determined by the audio content.

One of the great things about programme-dependent compressors such as this is that the unit does all the clever stuff, while using it couldn’t be simpler. The only user-adjustable controls on the front panel are indented rotary pots for Peak Reduction – the amount of compression applied – and Output Level, and a switch to choose between compression and limiting.

In Compress mode, the compression ratio starts around 4:1, rising to something approaching infinity when used as a hard limiting. The difference between these two modes can be quite subtle at gentle settings. However, when the unit is driven hard, the difference is far more dramatic.

Round the Back of the WA-2A

The only other front-panel controls are the power switch and a Meter Select switch that shows either gain reduction, the industry-standard +4 output level and output level at +10dB, useful when more dynamic contrast needs to be visually monitored.

So then, the front-panel controls are simple and intuitive to use; that’s only half the story, though, because on the back panel, there’s more going on than just the usual IEC power socket and balanced XLR/TRS input and output connectors.

Firstly, there’s a Meter Adjust control that allows you to calibrate the VU meter, should it drift out of true. Then there is a Stereo Link control along with a jack socket, which enables two units to be linked for true stereo operation; full instructions on how to set up these features are included in the WA-2A’s operating manual. The final back-panel control is called Pre-emphasis and is somewhat similar, although not identical, to the high-pass filter control found on many modern compressors.

In standard setting, the compressor reacts to the full bandwidth of audio processed through it; however, as the control is adjusted counter-clockwise, the unit becomes increasingly more sensitive to high-frequency information.

While this type of sidechain filtering was originally designed for use in FM radio broadcast applications, its unique tonal shaping properties are suitable for enhancing audio in many modern recording situations.

Straight out of the box, I was impressed with the WA-2A’s build and finish, particularly the revised Warm Audio logo, which is more elegant than the earlier design (which I once described as a ‘steaming turd’!) found on the early WA76 and EQP-WA units; current models now sport the revised logo.

The gently indented pots feel smooth in operation, while allowing precise recall of settings, while a look inside the unit revealed all of the high-quality components neatly laid out.

As with all analogue equipment, valve or solid-state, It’s worth powering up a good 30 minutes or so before use in order to reach optimum performance. Nicely warmed up, I strapped one WA-2A (I was sent two units for stereo evaluation) across a previously recorded male lead vocal that had already had its dynamic peaks tamed with our WA76 limiter.

In Compress mode, I turned up the Peak Reduction control until the VU meter registered around 5dB of gain reduction on the loudest passages, resulting in a smooth, natural and transparent sound. Dialling in more compression and increasing the output level gave a more obviously processed sound perfectly suited to modern pop vocal styles.

At this point, I experimented with the Pre-emphasis control with surprising results. As more Pre-emphasis was dialled in, the top end took on a lovely sheen which was quite unlike adding high-frequency EQ.

In fact, it reminded me somewhat of the effect produced by the Aphex Aural Exciter, which was a must-have product when I entered the recording industry in the mid-1980s. With this in mind, it’s a shame that the control is situated on the back panel, as once the unit is rack-mounted, easy access will be impaired. I envisage some users modifying their units so that the effect can be used via a control on the front panel.

Engineers long ago discovered the original LA-2A’s abilities when processing bass guitar and this new unit shows exactly why. Getting the response time right when processing bass is one of the trickier aspects of dynamics control and one that trips up many a rookie engineer when faced with a multitude of user-adjustable parameters.

Using the WA-2A to compress bass couldn’t be easier; simply select either Compress or Limit mode, dial in the desired amount of compression using the Peak Reduction control and make up the gain with the Output Level control. The multi-stage release characteristic of the unit really comes into its own in this application, responding smoothly to bass signals with no unwanted pumping artefacts.

Linking two units together in stereo, we strapped the pair across our main stereo mix buss during a final mixdown and found that in Compress mode, with just a couple of dB of compression, the WA-2A provided just the right amount of glue to help the lead vocal sit nicely in the mix.

As the WA-2A does not have a bypass switch, the Peak Reduction control has to be turned down to compare the dynamically reduced signal with the unprocessed signal. However, as the audio passes through the unit, the uncompressed signal will take on some of the compressor’s colouration. This may not be ideal for comparison purposes, but running audio – especially digitally generated sounds – through the unit with no level reduction results in the addition of a degree of analogue warmth.

Everyone who heard the WA-2As during the review period remarked upon how superbly they performed and the simplicity in creating great sounds. Bryce Young is at the head of a revolution in audio hardware, bringing out top-quality recreations of iconic processors at bargain prices.

He can do this by having units built in large numbers, keeping manufacturing costs to a minimum and passing on the savings to customers. There will always be a market for expensive, hand-built boutique equipment; however, when units as good as this can be bought for these prices, you have to ask yourself, why pay more?

The WA-2A is a most welcome addition to Warm Audio’s catalogue of legendary outboard units. It’s not as aggressive as many modern VCA or FET designs and extreme compression effects are not its forte: and yet, with its classic style, performance and bang-for-buck, it re-levels the playing field for units of this kind.

The WA-2A Optical Compressor In Use

For a great pop vocal sound, try using the WA-2A in conjunction with another dynamics controller such as Warm Audio’s WA76 limiter, based as we mentioned on the Urei 1176. Great results were achieved when using the WA-2A to compress a lead vocal that had been previously processed with our WA76.

For a slightly different, but equally great effect, the order of processing can be reversed, using the optical compressor first. before taming any remaining peaks with the limiter. 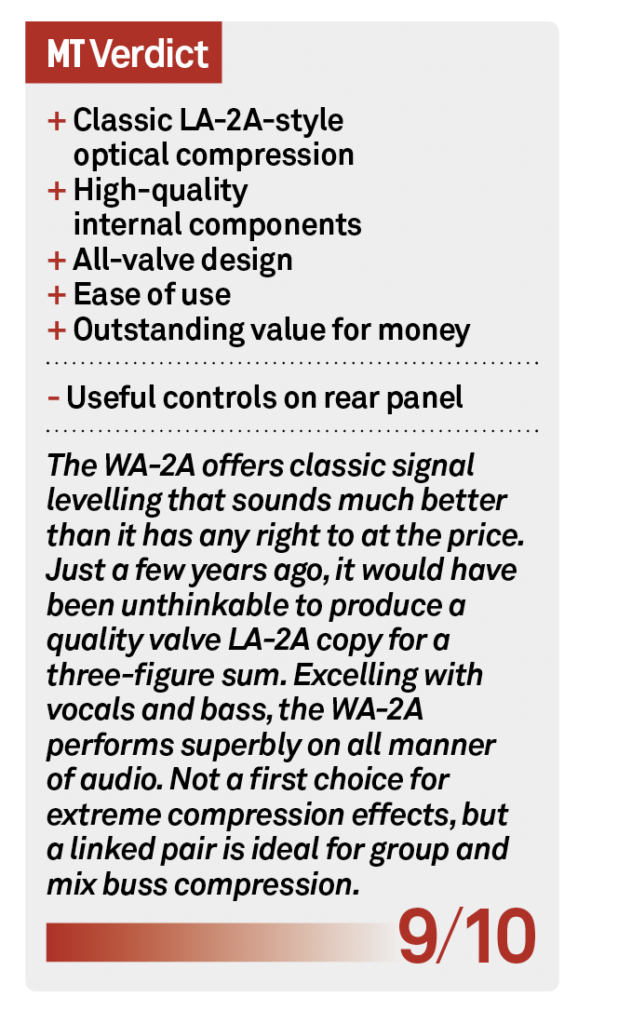