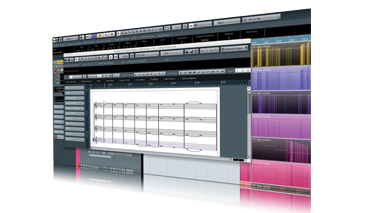 VSL are famed for their technically and musically superb orchestral instruments and Dimension Strings is their most ambitious venture to date. Keith Gemmell delves deep. 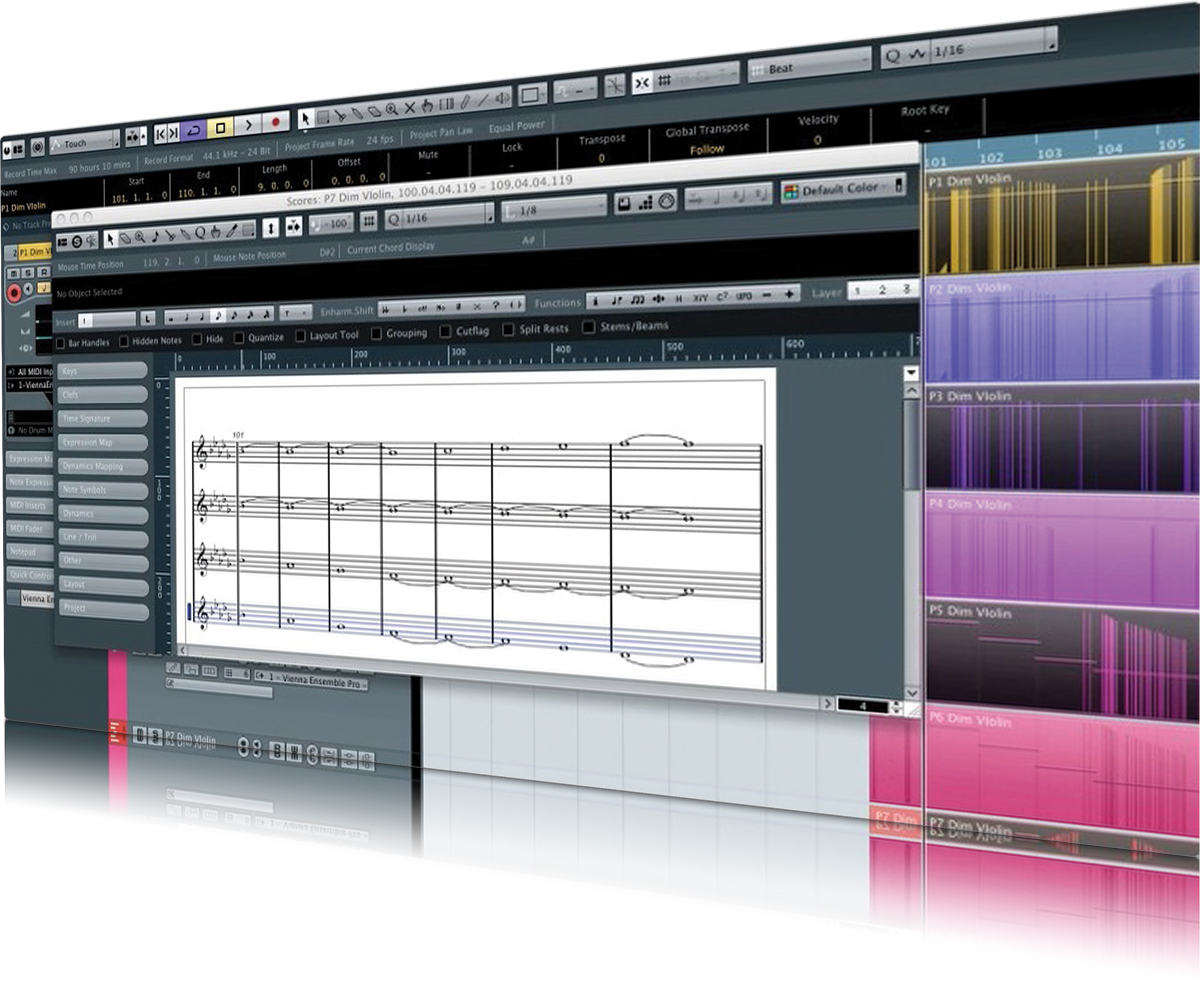 VSL began recording their most ambitious production ever, Dimension Strings, in 2008. Since then they have released each section incrementally: eight violins initially, followed by  six cellos, six violas and now a basic set of articulations for four double basses with more to come. Similar recording techniques were employed to those used for Dimension Brass, which we reviewed in 2011, to create what amounts to a multi dimensional virtual instrument.

This time, though, VSL have sampled deeper still by separately recording each instrument’s four strings as well as a large variety of articulations and ambient noises. A Vienna Instruments software player is required to run the library and this is included as a free download. However, to get the best from this library the Vienna Instruments PRO player, an extra cost of €145, is highly recommended.

Discrete Access
VSL recorded around a million samples for Dimension Strings, a staggering amount even by their own standards. So why did they go to so such lengths? The main reason was to create a string library where you could ‘get at’ the individual musicians within each section. For example, the eight violinists were recorded as usual, playing together to preserve the special performance characteristics of ensemble playing, where the individuals interact with each other.

Recording eight separate solo performances and combining them afterwards just wouldn’t sound as cohesive. However, because each musician in the ensemble was individually recorded with their own microphone we can access and tweak their separate performances in many different ways, thereby subtly altering the sound of the entire ensemble.

Getting at the Violins
Sticking with the violins for the moment, when loaded in the Vienna Instruments player, eight separate violin folders appear in the browser. As a possible alternative there are also four desks available with two violins to each desk. Obviously, for the other string sections, the actual numbers will vary but they operate on the same principle. It’s worth mentioning here that if you opt for the Vienna Instruments PRO player, two groups of four violins plus an instance with all eight violins set up together are also available. For busy composers and arrangers working to deadlines, these will prove useful.

If you have the time, for maximum flexibility it’s a good idea to load eight separate violins, each within its own instance of the Vienna Instruments player. By assigning each violin its own track and recording a passage into all eight tracks together you can edit the controller data of each violin track afterwards. You could also vary their articulations, having some violins using vibrato and others playing non-vibrato, for example, is one way to alter the overall texture. Of course, being eight different instruments they each have their own distinctive timbre anyway. They can also be used as solo instruments but for that it’s best to use the first or second violin. 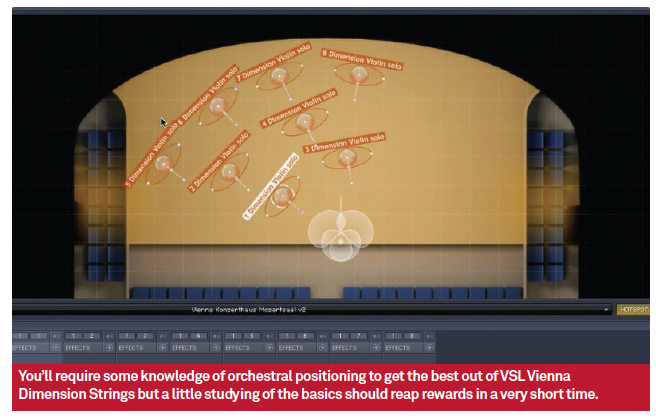 Natural Divide
Divisi is a common scoring technique with orchestral strings, where the written parts, usually chords, are divided up amongst the players of a particular section. The second violins, for example, may divide into two parts for a few bars, playing chords while the first violins play a higher melody. With samples, doubling a complete section is often the only way to achieve this but it’s difficult to do without upsetting the volume and balance of the section. When individual instruments are available, though, as happens here, it’s a simple procedure and the results sound perfectly natural because the number of players remains the same.

Another advantage of building sections with individual players or desks of players is the freedom to place them wherever you wish on a virtual stage using software such as Virtual Sound Stage or VSL’s own spatial placement products MIR PRO, MIR PRO 24 or MIRx. Although not as flexible as the first two, MIRx does it for you by placing the instruments spatially within a choice of two Vienna concert halls or Berlin’s Teldex studio. Again, the Vienna Instruments PRO player is needed.

Individual strings on a bowed instrument have different timbres and playing on a particular string will define the character of the sound, bright, dark or somewhere in between. With this in mind VSL recorded each string of each instrument in its full range.

Six presets are available for each instrument including an optimized setup for playing on all strings equally, changing to the next string in fifth intervals and avoiding open strings. Another setup forces open string playing. Four more force open string playing on either the G, D, A or E strings. Switching between them can be done with key-switches. It’s a great feature that we haven’t come across in other libraries before.

Once you begin using it, though, if you’re anything like us, you might find yourselves studying the string player’s finger positions more closely than before when watching televised concerts and You Tube videos (unless you’re a string player already, that is).

Highly Articulate
Expressive string playing makes extensive use of vibrato but so often with solo string patches the vibrato is fixed in stone and it soon becomes obvious that we are listening to samples and not the real thing. Noting the importance that VSL have attached to this aspect of Vienna Dimension Strings we were keen to try it out.

Four patch types are available. The first three, without vibrato, with vibrato and expressive vibrato (where vibrato is heard after a couple of seconds) are fixed. These are available for all sustains, legatos and portamentos. Perhaps the most impressive, though, is the fourth option where non vibrato to vibrato and vice versa is controlled with a crossfade slider.

The sheer number of available articulations and attention to detail is also massively impressive, although at the time of writing, the double basses are limited to just four. More will follow.

All patches with interval samples have four velocity layers that can also be controlled with crossfading.

Even the noises that occur when shifting positions on the fingerboard have been recorded as interval performances, without using a bow (the sound of dropping fingers on a string) and with larger intervals, the sliding noises. When mixed with other regular articulations an extra degree of realism can be quite easily be achieved, although it’s really only effective in quieter passages.

Almost in the realms of silliness but sure to please those in search of absolute authenticity, various ambient noises were also recorded for each individual player, such as breathing, positioning of instruments, chair noises when leaning back and forth and browsing sheet music.

A String Thing
This is a splendid string library, with a beautiful sound and highly detailed bowed articulations, which in the right hands is capable of providing very realistic results, especially when used in conjunction with the Vienna Instruments PRO player.

Some of the demos on VSL’s website bear this out and are nothing short of stunning. At first glance the number of instruments may appear small but it’s really very flexible and with a little trickery it can handle any setup from a small studio sized ensemble to a full-blown Hollywood string orchestra. On top of that, performing divisi, an important aspect of string scoring, is a complete breeze. 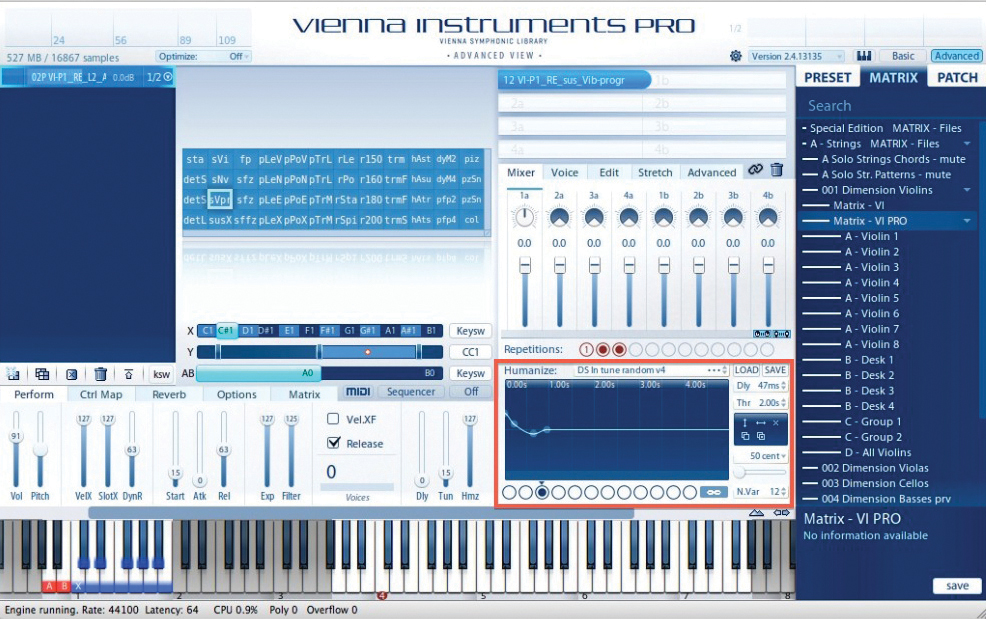 By no stretch of the imagination is this a beginner’s library and if you’re after out-of-the-box cinematic grandeur there are plenty to choose from these days from developers such as Spitfire and Project Sam. But if you have an existing knowledge of the classical string orchestra and how to write for it, this powerful library will serve you well and is a highly recommended purchase.

And if you already own another VSL string library Dimension Strings is still a good buy. Adding some or all of these superbly detailed instruments really will add an extra dimension to any string library, not just those from VSL. 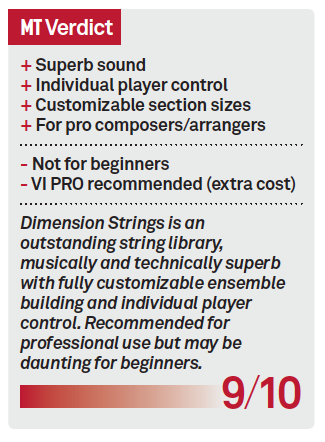