strong>The VP28 is the latest preamp design from Jeff Steiger of Classic Audio Products of Illinois (Classic API). Like other products in his range, the VP28 is inspired by Jeff’s 1976 vintage API console (you can see how Classic API got its name). However, while most preamp circuits focus only on the preamp circuit, Jeff […] 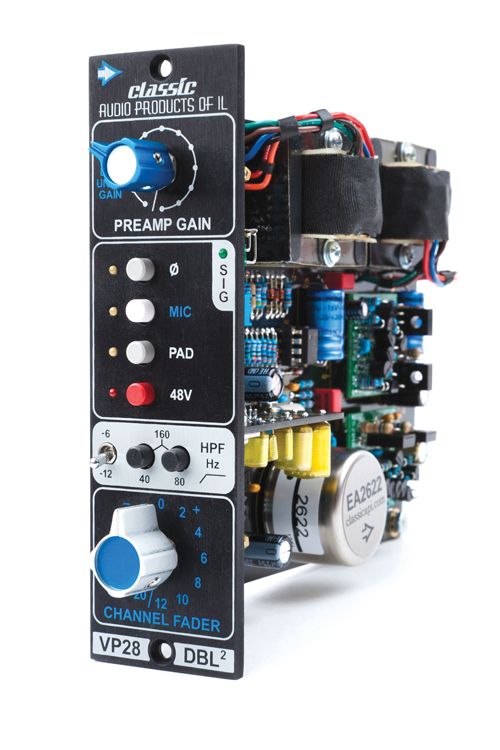 strong>The VP28 is the latest preamp design from Jeff Steiger of Classic Audio Products of Illinois (Classic API). Like other products in his range, the VP28 is inspired by Jeff’s 1976 vintage API console (you can see how Classic API got its name). However, while most preamp circuits focus only on the preamp circuit, Jeff has gone further, with the VP28 modelling some of the circuitry that follows the preamp stage, including the channel fader and post-fader booster amplifier.

Comparing his previous VP26 design – which was based on the preamp stage of the console only – to the actual console channel strip, Jeff noticed a big difference. In his words: “Sometimes more is more.” This isn’t entirely surprising as the fader and additional amp stage augment the circuit with an extra discrete op-amp and transformer, pushing the signal through more gain-staging and more iron.

The build itself was fairly simple. The PCB is easy to read and Jeff includes a full Bill Of Materials as well as detailed instructions for quickly matching the parts to the correct place on the board. A little care has to be taken – especially when soldering the two Grayhill switches in place – but anyone with a little soldering experience should be able to manage easily enough.

The gar2520s were a little more tricky as there are lots of components to fit onto such a small PCB, so if you are a little unsure of your skills it might be worth paying a little extra and getting the DOAs pre-assembled.

The preamp has a mic/line switch on the front panel that switches the input impedance and lowers the gain by 35dB, but other than this the input follows the same path through the Ed Anderson EA2622 input transformer, two op-amps and two Ed Anderson EA2623-1 output transformers. The preamp stage has up to 60dB of gain in 12 steps from +25dB to +60dB, while the Channel Fader stage has from -20dB to +12dB in steps of -4dB or +2dB (a total of up to 72dB of gain). Unity gain in line mode is clearly marked on the preamp gain knob, and with the Channel Fader at unity as well you can use the VP28 as a colouring tool strapped across an insert (or even across your master buss).

In addition to the mic/line switch, the front panel houses a polarity switch, -20dB pad, 48V phantom power switch and a high-pass filter that can be switched from -6dB to -12dB per octave at 40, 80 or 160Hz.

Once built, we were keen to try out the VP28 as soon as possible – there’s nothing quite like the buzz of hearing a preamp you’ve built yourself for the first time. We have two VP28s, so threw up an SM57 and an old Reslo RBT on a Vox AC30 and let loose on a Strat. The first thing we noticed was the variety of sounds we were able to get from the VP28s. Overload the input and you can get some gorgeous saturation on the signal, while still being able to control the level with the Channel Fader. Even when kept well within its limits the preamp sounds deep and warm, with plenty of punch and midrange bite. The SM57 surprised us in this test, lacking its usually slightly nasal quality and sounding like a much more expensive microphone in the process.

The VP28s really impressed when we took them along to a drum kit shootout alongside some Neve, Calrec and SSL pres. Everything we tested them on had more punch and aggression than any of the others. By the end of the test we were lusting after a rack-full of these preamps for drum tracking. On kick drum in particular the VP28 sounds tight and focused in the low end, with plenty of detail around the beater.

The VP28 is an incredibly versatile preamp which – if you have the time and skills to build them – offers a cheap alternative to high-end gear.

– Skill and time required to build

The VP28 is a fantastic preamp that will appeal to those unafraid of wielding a soldering iron.