We look back at Roland’s TR-909 – one of the most iconic drum machines ever, whose sound helped define dance music for a generation… 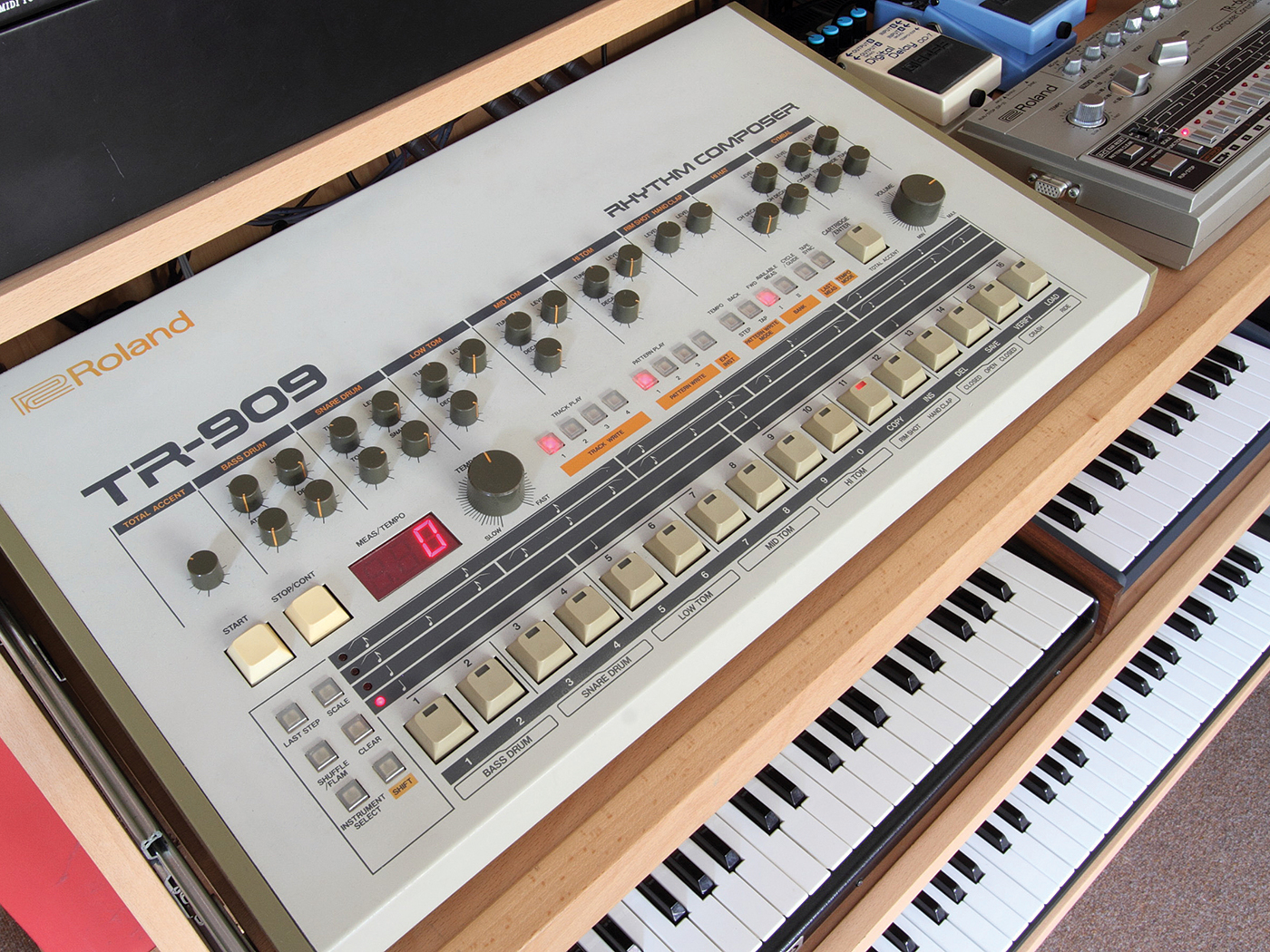 The Roland TR-909 Rhythm Composer, to give it its proper title, started life as the successor to the now-equally legendary TR-808, and was designed to address some of the critical shortcomings that resulted in the 808 being a commercial flop – you heard me right, the 808 was a flop! Roland’s designers harboured great ambitions of creating sounds which were far more realistic.

They put part of the 808’s failure down to the boomy bass drum and the synthetic-sounding cymbals, so they elected to go into enormous detail to ensure its successor sounded as realistic as the technology could allow. The only problem was, Roland decided to stick with analogue technology for most of the 909’s sound creation, so all of the drums were created in a similar fashion to the 808, but this time with more aggressive results.

The kick drum lost the boom associated with the 808 in favour of something far more strident and hard hitting. It had real presence, but strangely still sounded largely electronic. This might also account for its immense popularity, which only came later with its acceptance as the kick drum of choice for house music. The snare offered similar credentials; gone was the lightweight essence, and in came a heavy-hitting timbre with presence and body, more akin to an acoustic snare – but one awash with electronic white noise. 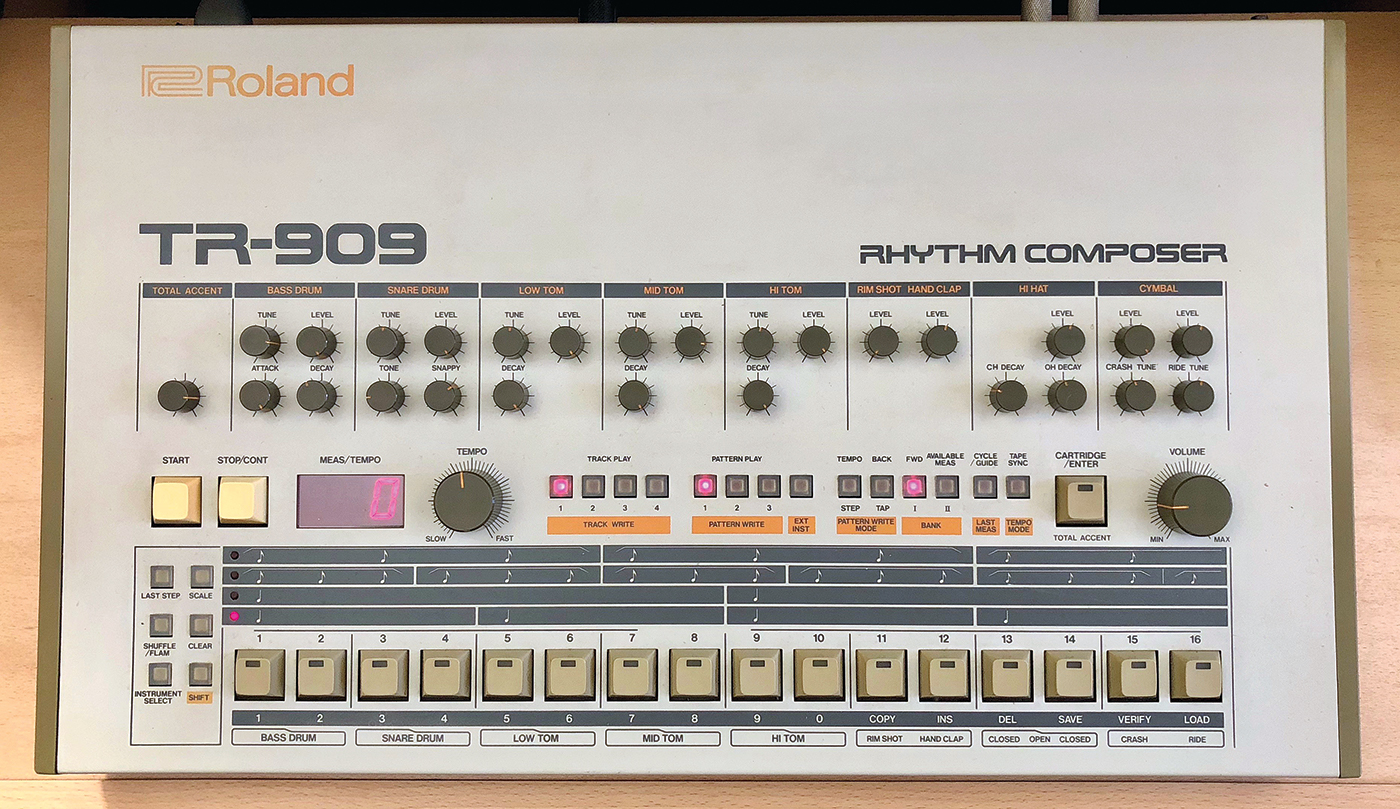 Another part of the historical jigsaw leading to the 909’s commercial failure was its rivalry with the Linn series of drum machines. Gone were the analogue imitators, and in were the crunchy-sounding bits of early digital, with full-on samples featuring click-led bass drums and full-sounding snares. The camps were divided; if you were making pop music in the 80s, you’d most likely have a Linn drum of one incarnation or another, and would leave the lowly 909 firmly on the shelf.

It’s rather ironic, then, that as the Roland design gurus struggled to capture the coherent sound they yearned for, they effectively threw in the towel when it came to cymbals and hi-hats. Learning from their 808 mistakes, they just couldn’t get things to ring properly. So with abandon and bravado, Roland designer Atsushi Hoshiai brought in his own cymbals from home, as he was a drummer himself and Roland opted to construct a hybrid machine, sticking to analogue sounds for the main drums, but using sampling technology for the now iconic hi-hat and other cymbals.

So there it was, the mid-80s drum machine which nobody wanted to use, because the sounds of the time were moving firmly in the digital direction. Like the 808 before it, second-hand prices for 909s plummeted toward the end of the 80s and early 90s, allowing the new breed of bedroom producer to pick them up for next to nothing.

What followed was the ascent of the TR-909 as the machine of choice for just about all forms of house music, although the 808 continued to put in an appearance elsewhere, along with other notable classics such as the E-mu SP-1200 as the music evolved and mutated into other forms and genres.

As home-computing technology was also in its infancy, at least compared to current machines, many reported that the timing of the 909 was second to none, offering a tightness of pattern to go with the tight sound. It conformed to the usual pattern-and-song programming style, making it easy to work with, and was adorned with pots for changing sounds on the fly and individual outputs to treat them externally, and crucially, unlike its 808 predecessor, it offered MIDI – albeit in a basic and rather unreliable form.

Several years after its inception and ultimate commercial failure, the new king of dance music was born, and judging by second-hand prices today, the king still reigns supreme. Long live the 909!