With such an abundant synth history, it’s easy to overlook Roland’s SH-2 in favour of more popular models. But that would be a mistake… There’s something of a Roland renaissance taking place right now, with the emergence of so many past classics in Boutique and Plug-In/Out form – and for good reason. Those old machines […]

With such an abundant synth history, it’s easy to overlook Roland’s SH-2 in favour of more popular models. But that would be a mistake…

There’s something of a Roland renaissance taking place right now, with the emergence of so many past classics in Boutique and Plug-In/Out form – and for good reason. Those old machines are simply stunning. But while many clamber for the mid-80s models, it’s worth looking back a couple of years further, to see what else Roland had to offer.

This is where you’ll find the SH-2. Originally released in October 1979, the SH-2 was not as widely accepted as some of its peers. You only have to look at a list of users, which admittedly included the likes of Nick Rhodes from Duran Duran, and China Crisis, to realise that it’s a slim contingent when compared to other Rolands. Don’t let that fool you into thinking that it’s a sub-par synth, however.

The first obvious point to make is that the SH-2 boasted two VCOs, the second of which could be tuned over a narrow or wide range, meaning that both fifth- and 10th-based chords could be created very easily. Add the sub-oscillator, which is linked to VCO 1, and you have a very substantial core sound.

There were subtle differences between the oscillators, too. While both offered Saw, Square and a PWM variable Pulse, VCO 1 offered a Sine, while VCO 2 offered Noise. It’s a favourable pairing, although there is no Oscillator Sync option, which is a little bit of an omission for a machine of this calibre. 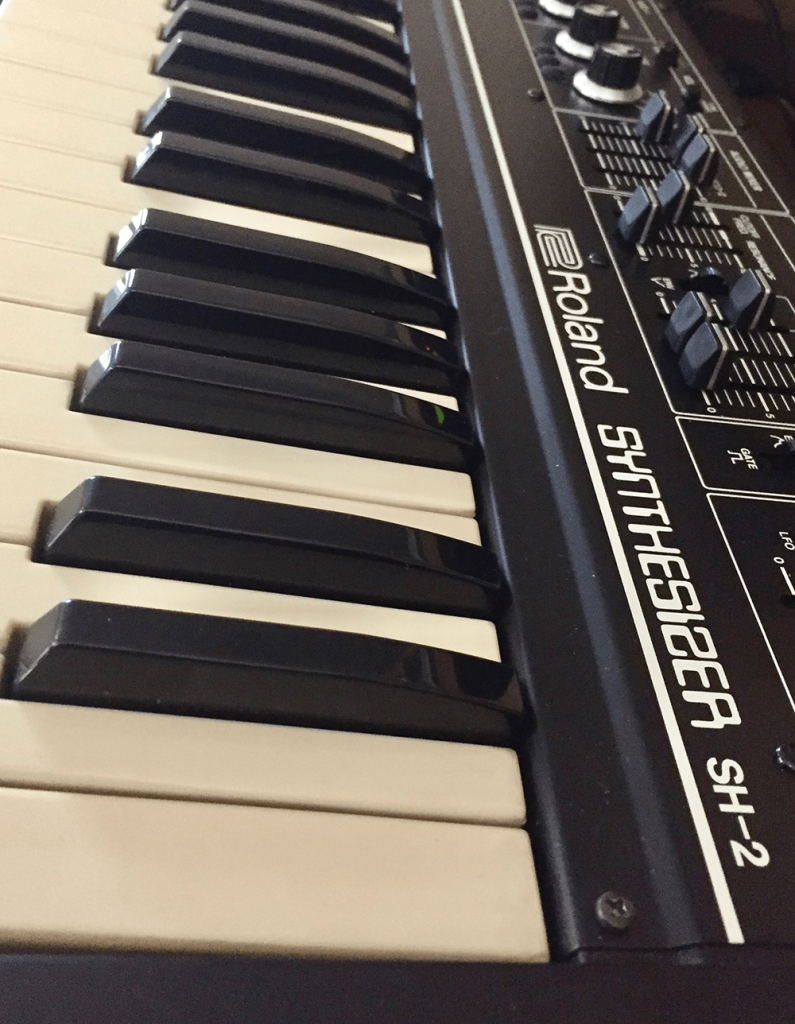 However, with the self-oscillating filter, which tracks beautifully, you have a very distinct sound, which is different from the later Rolands, something of a cross between a more Moog-like timbre and later Roland filter incarnations. If forced to, I might have to use the ‘PH’ word (not something I generally employ as an adjective) but in this case, it’s highly accurate – the SH-2 does indeed sound very ‘phat’, but thanks to a single ADSR-styled, snappy envelope, it benefits from a crispness which is something of a Roland trademark. It’s one of the reasons that we all love working with the earlier Roland synths – the sound often fits where the American-styled machines might not.

The SH-2 offered other niceties, too; the Sample and Hold LFO is great for routing to the usual locations, but lacks the ability to clock to the outside world, which makes it a little bit of a lemon, even though it sounds great in use, just not in sync! There’s also the benefit of Portamento, which – curiously enough – is controlled purely via a fader, so if you want to turn it off, you have to slide the fader all the way down.

The lack of switch here can be a pain. The Autobend feature, which is not linked with the portamento or pitch wheel, produces a ‘glide’ from the underside of a triggered note. In that classic late-70s way, this is quoted in the manual as being useful “for creating vocal style timbre”, presumably in the crooning sense of vocal style, as each note is crept towards, rather than hit square between the eyes!

A little box of early-80s joy

The SH-02 comes from a time that was ruled by a particular breed of Roland synths, such as the ProMars, Jupiter-4 and System-100. Firmly part of this crowd, but with a slightly reduced price tag, it gives a flavour of the era without the attendant hideous financial pain.

Even less of a cash drain is the current SH-2 Plug-Out, available directly from the Roland website. It offers two modes of operation; you can either run the Plug-Out through your favoured DAW, or if you feel that you want a hardware option, the Roland System-series synths will allow for loading of the plug-out into hardware, for use in the outside world.

Sonically, the detuning of the two oscillators, along with a healthy dose of PWM movement, date-stamps a distinctive sound of its time, which is very different from the later SH-101, Jupiter-8 or Juno-6. These models are toned and musical and generally more considered instruments, whereas the SH-02 is a tamed animal, with plenty of grunt – that bottom end doesn’t disappoint!