Vanguard are a new audio company with an old heritage. Mike Hillier steps into the breach with their elegant new mic…

Shortly before Christmas, MusicTech was invited to an event at Miloco’s The Pool Studio complex. As part of the event several mic manufacturers had set up in a vocal booth and we were given the opportunity to listen to each of the mics in turn. There were some wonderful mics at the event, but one in particular stood out: a dark red mic from a manufacturer we hadn’t come across previously: Vanguard Audio Labs.

The American made V13 is the first mic from the new Vanguard stable, it is a large-diaphragm, multi-pattern, valve condenser mic. It comes in a large flightcase, with space for the power supply, shockmount, cables and the mic itself.

The V13 comes equipped with a Vanguard-badged European valve. Vanguard won’t give anything away about where exactly it comes from, or even what type of valve it is. All the company would reveal was that this “particular tube has never been used commercially in a microphone before”, but point out that it can be replaced with any 12AX7, 12AY7 or 12AT7 style valve – making it great for any engineers who enjoy digging in and experimenting to get their preferred tone. 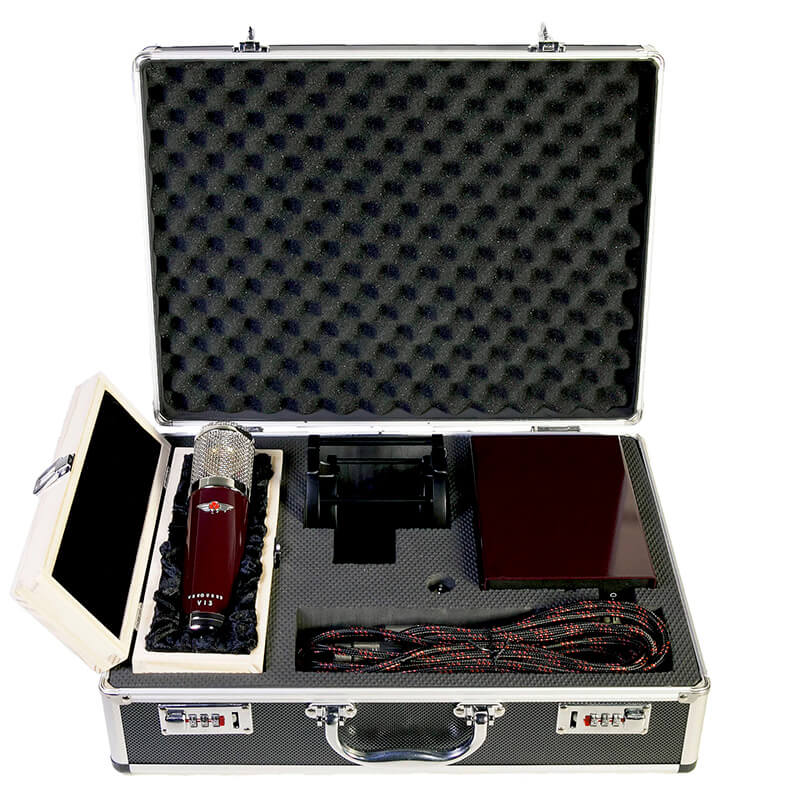 The mic itself is stunning. The “Pinot Noir” red looks great, and the winged Vanguard logo evokes a certain British car company. While easy to ignore as superfluous, the aesthetics of a mic are important for encouraging great performances in the studio – something the Vanguard V13 should have no trouble doing.

At the rear of the body is a mirrored V air vent, intended to cool the valve, which also provides an opportunity to show off the heart of the mic. The rear of the body also houses the roll-off and -10dB pad. The mic capsule is a custom, hand-tuned, 34mm edge-terminated, gold sputtered 3µm Mylar dual-capsule assembly.

The power supply – which supports both 110 and 240V – provides a switch for selecting from one of nine polar patterns, from omni, through cardioid, to figure-of-eight. The power supply connects via a 7-pin XLR cable – supplied. 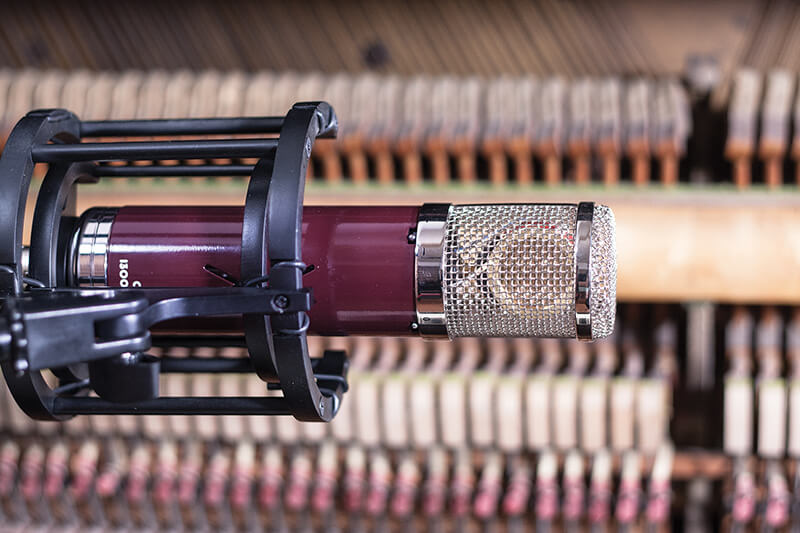 Character mics are something of a luxury, so it’s not so much that you need this, as that it may very well make your recording life easier if you have it. A good range of more neutral mics is certainly more important first off when building up your microphone collection, but sooner or later you’ll likely want to add something with a little more flavour.

For our initial experiments with the V13 we used it as the vocal mic, as part of a live vocal and acoustic guitar recording. Initially we ran the V13 into the preamp section of an LA-610, with the EQ and optical compressor disengaged. With the V13 in cardioid mode we got a stunning, thick, mid-forward vocal tone.

The mic has a fairly pronounced low-end, and smooth silky top, but it’s around the mid-range that the character of the mic really pushes the vocal forward, really helping it to sit above the acoustic guitar in the mix.

However, we were getting a fair amount of acoustic guitar bleed, which when we engaged the compressor section of the LA-610 resulted in the guitar lifting in the mix whenever the vocal dropped out.

Sometimes this kind of bleed can be perfect, helping the guitar to fill the spaces left behind when the vocal drops out, but it wasn’t working for us on this track, so we switched the mic to figure-of-eight mode and positioned the capsule such that the null-point at the side was pointing towards the guitar.

With the mic in this position we got far less direct signal from the acoustic guitar, resulting in less bleed, and what bleed there was, had more of a room tone to it, while the vocal we were recording also now had a slightly different character.

The direct voice was a little more present in the low-end, adding a gruffness at the bottom of the vocal that helped to add weight and body to the performance. Dealing in the compressor resulted in a smooth performance, with more than a hint of classic Neumann character. 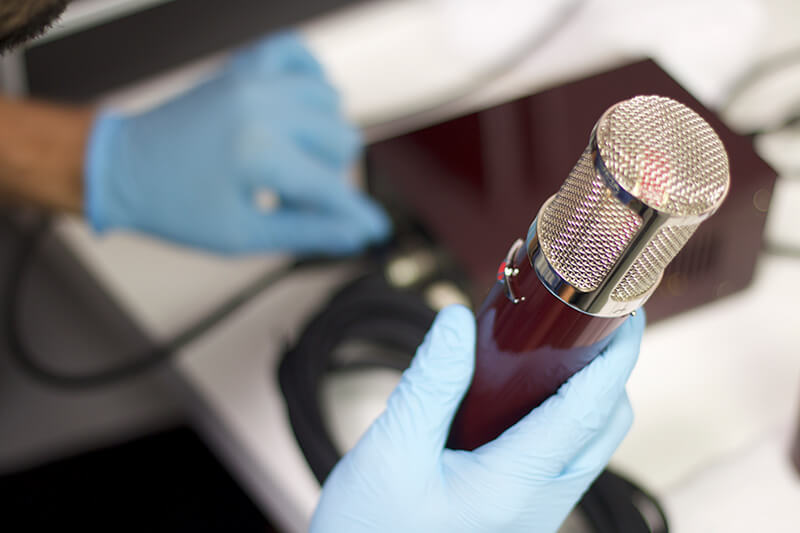 Although we didn’t use the V13 for the acoustic guitar parts of this track – owing to only having one – we did end the session by making a few passes of the guitar with the V13, and some electric guitar overdubs.

The mid-forward voicing of the V13 is absolutely perfect for guitars. On acoustic guitar the woody body of the guitar was emphasised over the brighter string overtones, producing an earthy guitar tone, that sits really nicely in solo guitar and voice arrangements, and has sufficient clarity through the top-end to be worked into a busier mix.

On an electric guitar cabinet, we preferred the tone with the mic in cardioid mode positioned about a foot from the cabinet. This gives a natural representation of the guitar, without too much fizzy top-end. For bluesy, clean-to- slightly-overdriven, styles of play this is perfect, while for more distorted, heavier styles we got great results with the figure-of-eight mode and positioning the mic a little closer.

The Vanguard V13 is a fantastic mic with plenty of character and a big bold sound. What you’re not getting here is a flat, neutral response. The V13 has a sound all of its own, and that means it can’t be all things to all people.

It will take some of the work out of the EQ for you, but when it’s not working it may be easier to reach for another mic than try and shape the signal back into shape. We tend to prefer this type of mic to overly flat options, as they force you into making a decision, but you’re going to need a few different options.

A mic of this quality, that sounds this good usually comes with a hefty price tag, but the Vanguard V13 is much more reasonably priced than one might expect. We expect that a lot of project studio owners will be eyeing this up for their next mic purchase. 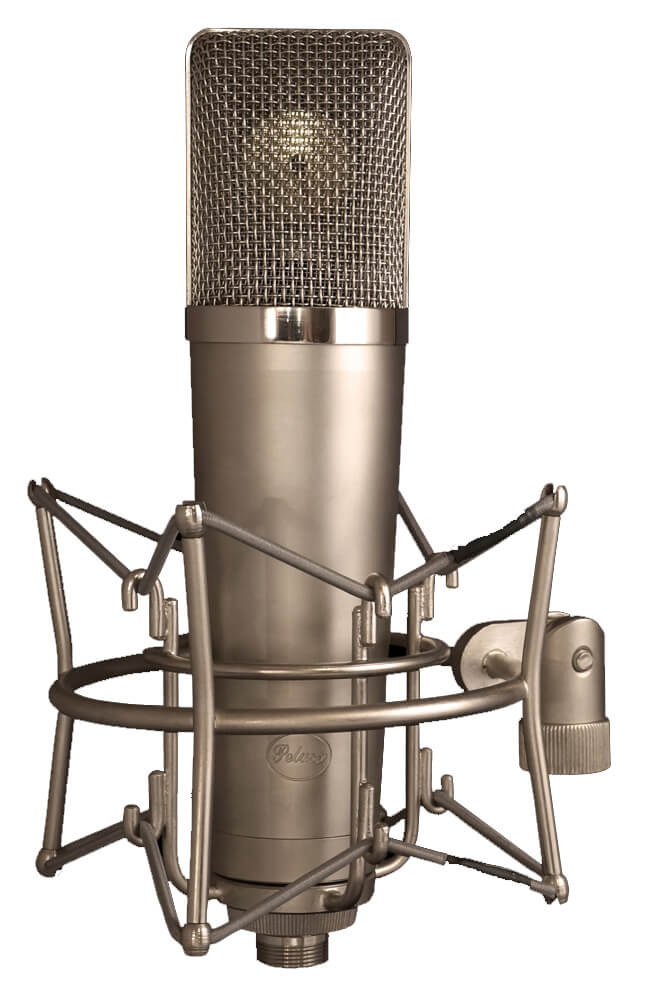 The Vangard V13 reminded us a lot of the classic Neumann U67, especially it’s slightly aggressive midrange. We hear that mic is coming back into production, but if you can’t yet get a Neumann, or afford one, then Peluso makes an excellent clone.