Long-held views on what can and can’t be done with audio are being redefined. Liam O’Mullane spots another game-changer. 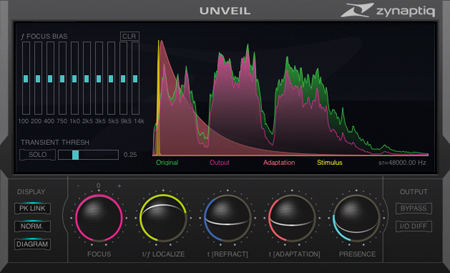 There have been some incredible advances in music software over the last decade or so. Software such as Auto-Tune and the recently introduced polyphonic DNA features of Melodyne are excellent examples of software that rewrites the rules on what can and cannot be done to an audio recording. Hoping to join their ranks is Zynaptiq – a relatively new company that has so far released Pitchmap, which offers real-time, polyphonic pitch correction.

Taking the real-time control of Auto-Tune and merging it with the polyphonic tuning capabilities of DNA, it’s another plug-in that pushes the boundaries of what can be done with audio.Here we’re looking at the company’s second release – another processor that aims to rewrite the rulebook. Unveil is a de-reverberation tool that promises to give you control over how focused and dry a recording is by enabling you to balance the amount of reverberation present within a recording.

Unveil’s GUI Zynaptiq is surprisingly simple in terms of presentation and the number of controls needed to remove reverb from an audio recording, and we found it quite easy to figure everything out through simple trial and error. The manual does serve to explain things a little more in-depth, but this plug-in really is straightforward to operate.

The main de-reverberation controls span five trackball faders. These look like circles and actually function just like any normal fader controlled by a mouse or automation, except they are designed this way to be compact within the interface.

The Focus control enables you to swing anywhere between the two extremes of how dry or wet you want your processed audio to be. A ten-band set of EQ sliders enables you to either focus or ignore reverb in certain frequency areas. To be honest, though, we found that we didn’t need to use it on our test material.

The IO DIFF button located on the very right of the interface enables you to hear the opposite of what you’re currently focusing on. This is particularly handy as it enables you to hear what Unveil is classing as the reverberation signal. You can then make sure that dry elements or transients are not present.

t/f LOCALIZE is another frequency focus-type of tool that lets you apply a broad treatment or focus in on smaller areas at the potential cost of hearing processing artefacts. t[REFRACT] enables you to control how sensitive the reverb control is to changes over time, while t[ADAPTION] determines the recovery time that elapses before the signal is next analysed, acting over time much like a standard compressor’s release control.

Finally, the PRESENCE trackball enables you to control the top end balance, brightening things up a bit after processing, as when the reverb is removed, things can start to sound a little dull.

There are plenty of situations in which you might want to remove or re-balance the amount of reverberation in a recording. You might, for example, have different recordings from a multi-camera piece of footage, and you want the perceived distance of an actor’s voice to remain constant. Unveil can be used on each audio track, allowing you to achieve this balance. However, it is heavy on CPU resources, so quad-cores and above are recommended for more than a few instances.

Throughout our testing we used dialogue, amped guitar recordings and a wide variety of samples packs to see how well Unveil performed. The results were excellent and we found it quite hard to get noticeable artefacts. Its real strength lies in how well it focuses on reverb despite continuously changing information, such as on a vocal track. We explored various acapellas and managed to remove nearly all the reverb without any drastic changes to the sonic qualities of the dry vocals.

We also went through various classic drum breaks and found we could achieve a much more modern drum sound as we removed the ambience, leaving some dry and incredibly focused hits to work with.

In general we struggled to find sources that Unveil couldn’t deal effectively with. Even if there isn’t much noticeable reverb on a track, it doubled as a way of getting an incredibly upfront and tight focus to any sound in a mix. It lacks an output level, however, so we applied a gain plug-in afterwards. This, plus releases of Unveil in VST and RTAS formats, should be addressed in a forthcoming update.

A very handy and highly effective plug-in to have in your audio toolbox. Great for anyone wanting to re-balance or remove existing ambience within a recorded file.