With roots stretching back to the 1950s, Universal Audio is unusual in that it is both equally respected for its heritage analogue equipment and cutting edge digital technology. Having traditionally focused on pro audio gear, the plug-in side of the company has been veering deeper into the electric guitar arena with acclaimed emulations of classic and modern amplifiers, cabinets and speakers.

These digital models are packaged with sophisticated microphone models that allow users to experience how iconic amps sound with industry standard dynamic, ribbon and condenser mics.

Described as an ‘Amp Top Box’, the Universal Audio OX combines much of UA’s guitar-related modelling DSP with a reactive attenuator. It’s housed in a substantial metal case with a front edge of solid maple, an amp style jewel light and five control knobs that are colour coded to correspond with the digital and analogue functions.

If you’re not a guitarist, perhaps you’re wondering what a reactive attenuator is. Sound engineers often experience looks of murderous contempt when asking guitarists to turn down to control excessive stage volume or minimise spill.

While guitarists who refuse to turn down may be regarded as unhelpful, they’re not necessarily being unreasonable. For them it’s a tone issue. Most use valve amplifiers and they sound best when they’re cranked up – at least to the point where the valves are compressing and distorting. 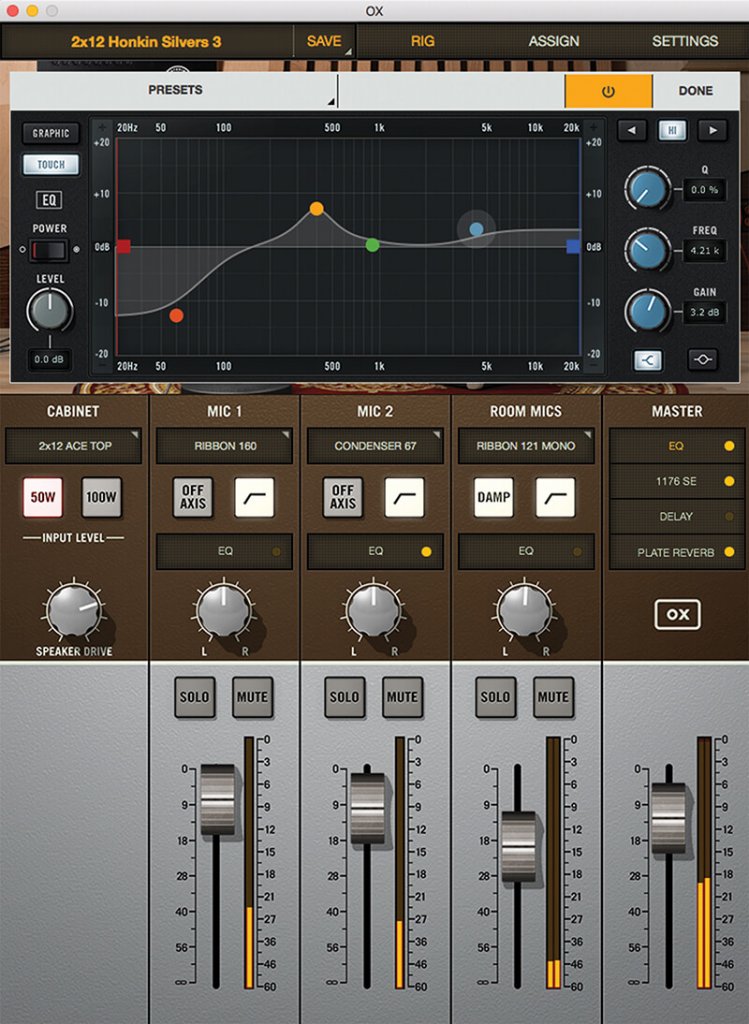 Attenuators are used between an amplifier’s output and the speaker. This allows guitarists to set their controls however they like because the level is dropped once the signal has left the amplifier. In theory the guitarist’s tone remains intact, but the engineer no longer has to deal with crazy volume levels.

Various types of guitar attenuator exist, but reactive attenuators, like the OX, are popular because they attempt to retain the interactive relationship between an amplifier and a speaker – thus maintaining both the tone and the dynamic response.

So, the OX’s analogue side is solely concerned with attenuation and a single control provides six steps from full volume to silence. On the rear panel there’s an impedance selector offering 4, 8 and 16 Ohms for speaker matching and mono jack sockets to connect an amp and speaker.

Universal Audio usually packs its DSP into audio interfaces and satellite boxes, but here it’s all housed in the OX itself. There is no amplifier modelling because it’s designed to be used with actual amplifiers, so instead the OX processes raw amplifier output through speaker, cabinet and microphone models. 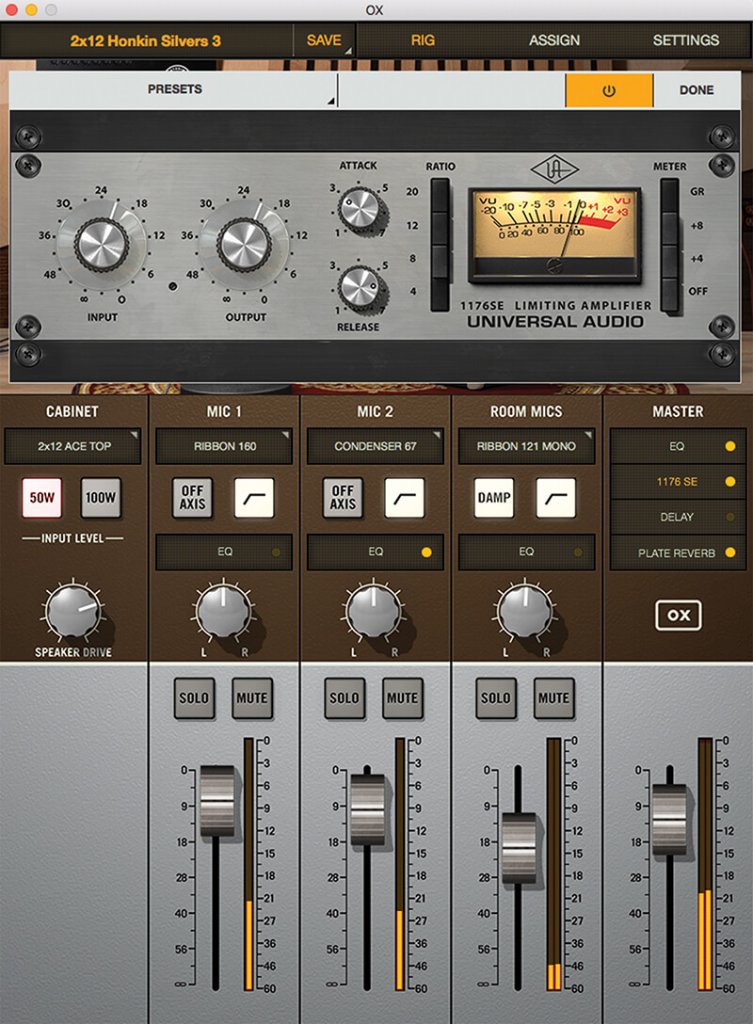 The resulting line level signal exits via mono/stereo output jacks that operate independently from the attenuator. The rear panel also has SPDIF digital output on RCA and optical TOSLINK connectors and three USB sockets that are intended for system updates as they become available.

The OX ships with six factory installed speaker/cabinet presets that are selected using the rig control. Each combines with a different room ambience simulation that can be mixed with the dry rig tones using the room control. The mixed sound is routed through a line out control and also appears on the headphones socket.

For full access to the effects processing, range of options and creating user presets, the OX must be connected to a computer or tablet via Wi-Fi. At present this is an Apple only product and there are currently no plans for PC or Android support.

Clearly the OX is primarily intended for guitar players who don’t want to be at the mercy of sound engineers and vice versa. Even so, if you like running beats, basslines and vocals through guitar amps but rarely get the opportunity, the OX is ideal for the job. 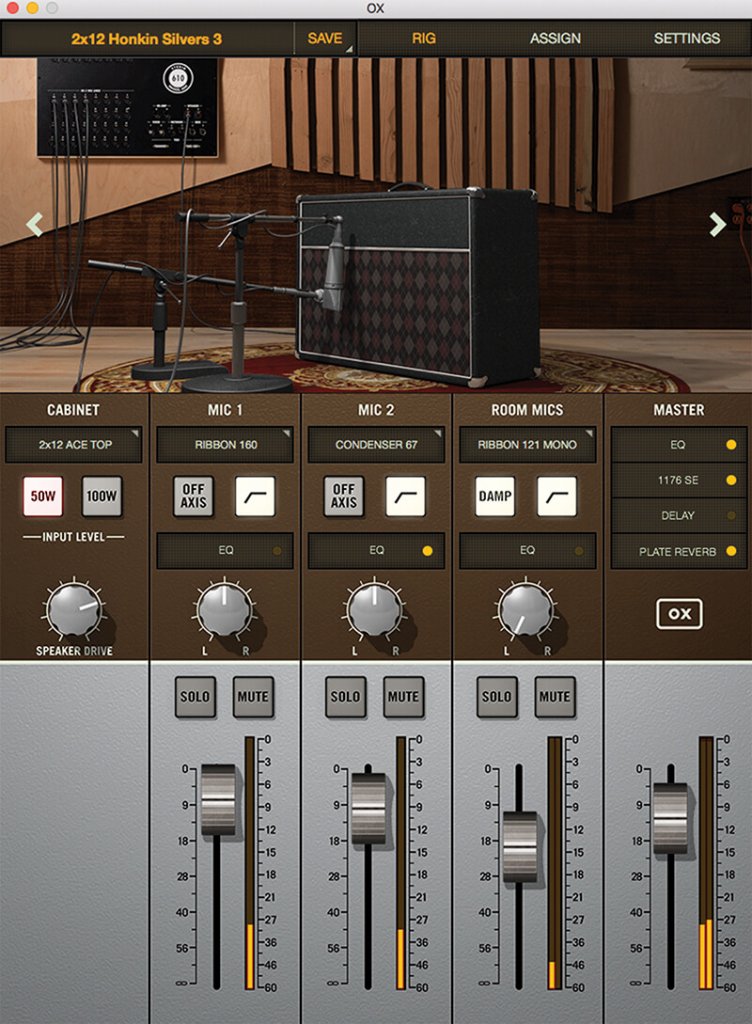 It’s rather too valuable to keep on stage at a venue for public use, but ideal for touring bands. We think the OX is at its best in a studio environment, where guitarists can enjoy countless inspiring tones and recordists get unparalleled control and convenience as well as pristine sound quality. This is a bona fide alternative to microphones that will make guitar recording quicker and so much easier in top studios and project studios alike.

If your primary interest is attenuation, simply connect the OX to its power supply and use the speaker volume to set the level coming through the guitar speaker. The attenuator is transparent, with little loss of treble or clarity, however the stepped level switching is crude compared to the variable controls of some reactive attenuators.

The digital connections are restricted to 44.1KHz so we opted for the analogue stereo line outputs plugged directly into a UA Apollo Quad. With the OX software downloaded and installed, we selected the OX Wi-Fi hotspot from our computer’s drop down menu, entered the assigned password and launched the Ox software.

Once in, the interface is comprehensive and intuitive. There are three channels – two for close mics that can be switched on/off axis, and a third for a room ambience mic. On each channel you can select a dynamic (SM57/Sennheiser 421), ribbon (Beyer C160/Royer 121) and condenser (Neumann U67/AKG C414) mic – with two choices of each.

Every channel has solo, mute and bass cut switching with individual equalisation. They route to the master fader and EQ, 1176 style compression, delay and plate reverb can be applied globally. You can also pan the channels hard left or right to record each mic onto separate tracks or separate the close mics from the ambience.

Clicking the cabinet tab gives you 17 cabinet and speaker types. Two ‘input levels’ are labelled 50W and 100W and there’s a speaker drive control that changes the compression and overdrive characteristics of the speaker model.

Universal Audio has effectively simulated a virtual mixing desk based pro-recording set-up for electric guitar, complete with multiple mic channels and all the commonly used effects. Selecting the virtual equivalent of the actual speaker in a couple of our test amps and comparing them, the OX sounds exactly like a well mic’d version of the real thing. Sonically-speaking we can identify no downside.

The OX is a decent, if slightly limited attenuator. As for the recording side, the clincher is whether the OX sounds as good, if not better, than a conventionally mic’d speaker cabinet.

If you have access to a great sounding recording room and a selection of the very finest classic microphones, compressors, equalisers and reverb effects, then arguably not. But we would have absolutely no reservations about using the OX on a pro session.

If your usual modus operandi is to record amps in a back bedroom, cupboard or project studio vocal booth using an SM57, we believe the OX is infinitely preferable. The same goes for mic’ing up on stage. In addition to superior tone and flexibility extraneous noises are a non-issue and spillage is eliminated.

We dislike the wireless only connectivity, stepped attenuation, fixed sample rate and unassigned footswitch, but would hope that some of these misgivings will be addressed as upgrades become available. This product will almost certainly evolve and improve over time but for now, we can only review what we’re given and it’s already a groundbreaking product. 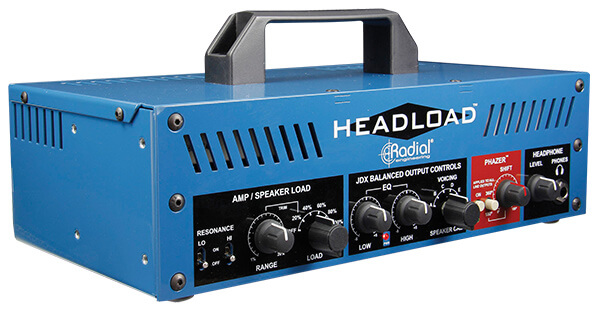 Guitarists remain notoriously squeamish about digital technology and this attempts the same jobs as the OX in the analogue domain. A resistive load combines with stepped attenuation and a trim

A load box that allows two simultaneous speaker simulations with eight microphone and 50 cabinet models, plus EQ, compression and phase control. Users can also choose resistive or reactive attenuation and use
the Torpedo Studio for re-amping.