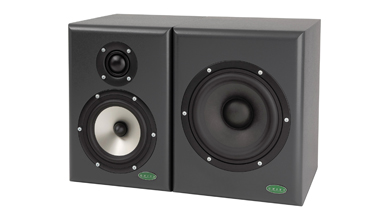 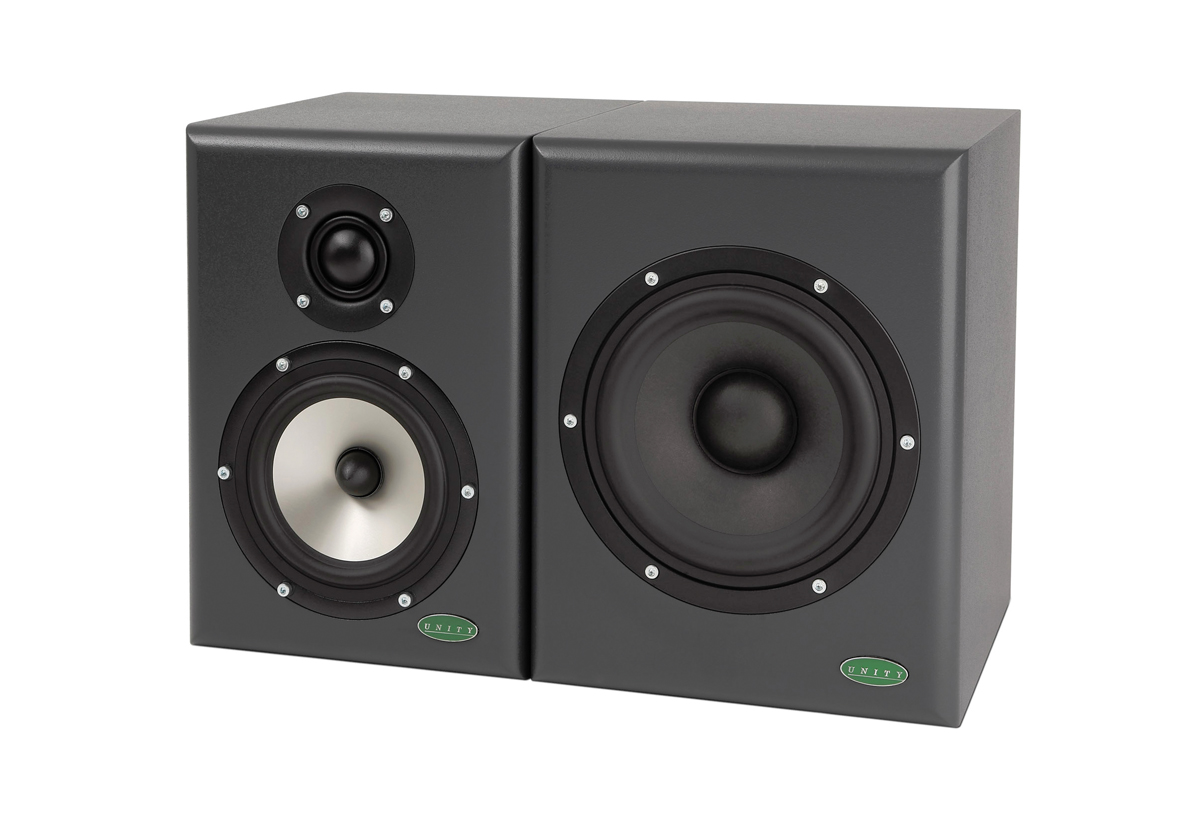 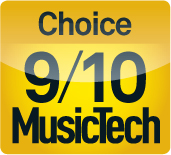 The company that brought us the Boulder, Rock and the mighty Avalanche has added the Pebble and Bam Bam to its range of active studio monitors. It’s hard to imagine how Unity Audio’s geologically inspired theme can extend much further, but if they’re stuck for a name we’d suggest a monitor that’s specially voiced for producing dubstep called the Fubarite.

Anyway, back to the subject at hand. The Pebble is Unity Audio’s smallest offering so far, but it’s still a reasonably substantial box. For the development phase Unity Audio turned to a very experienced designer called Kevin Van Green. He had turned up an old BBC design with an ‘aperiodic vent’, and after using it in the Avalanche subwoofer, it has found its way into both the Pebble and Bam Bam. 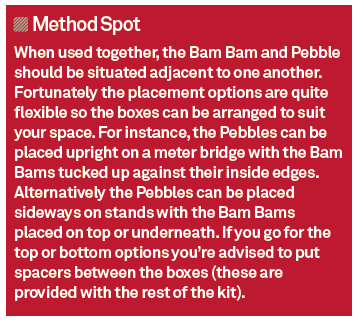 The Tech
The speaker enclosure is a split chamber with a partition that employs a restricted membrane. Much research was carried out to determine the best diameter for the hole in the partition and the density of the foam used to plug the hole.

Restricting the flow of air between chambers ‘fools’ the woofer into thinking it’s actually in a larger cabinet. This creates a bigger and deeper bass response than you might expect from any given size of sealed enclosure.

Unity Audio’s approach to monitor manufacturing seems to be closer to that of some high-end hi-fi companies, but in a sensible way rather than fantasy fulfilment. Rather than manufacture everything in-house, various components are sourced from specialist manufacturers. For instance the Pebbles 5in woofer comes from SEAS in Norway, and the soft dome tweeter comes from Wavecore in Denmark. 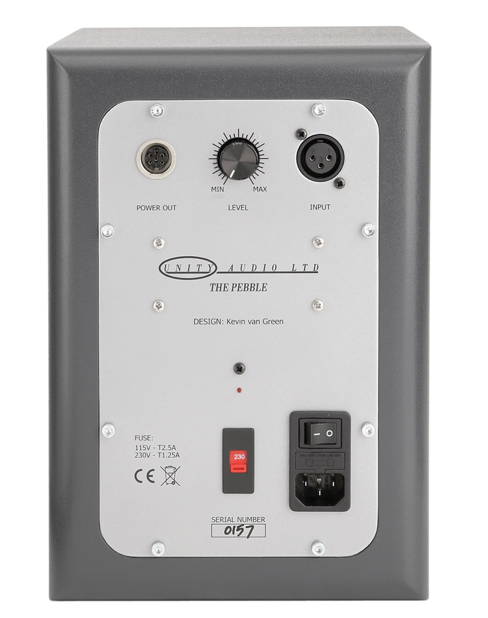 The appearance is more conventional than some of Unity Audio’s offerings, but then again, the Pebble and Bam Bam are from the more affordable end of the range, so there’s no exotic or eye-catching molded Corian speaker baffle or sculpted lines. Instead you get 18mm-thick infinite baffle cabinets and massive 30mm thick MDF baffles with rolled-over edges to minimise diffraction.

The on-board amplifiers are fully discrete units from Hypex in Holland and they a produce total power output of 180W for each drive unit, which is pretty remarkable for speakers of this size. The power supply also comes from Hypex and it’s designed to feed three amplifiers, which explains the power output socket on the back of the

Pebble Enclosure.
Although the Bam Bam has a 180W internal amplifier of its own to drive a single 7in SEAS woofer, it takes its power from the Pebble’s power supply. This illustrates how each Bam Bam can only operate as a unit with a Pebble.

Although it’s designed to drop the low end down from 48Hz to 34Hz, it certainly shouldn’t be regarded as a separate subwoofer that has to be integrated with an often unrelated monitoring system. Like the Pebble, the Bam Bam is priced and sold in pairs. 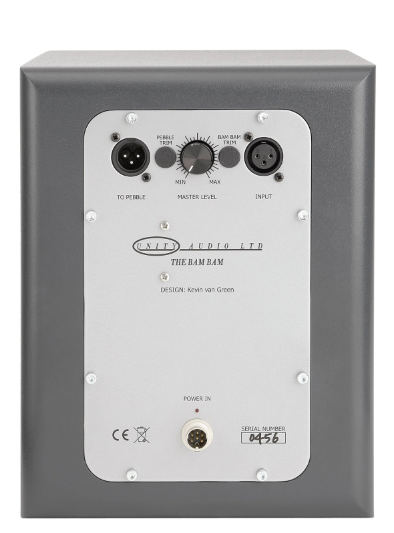 Why Have Two Sets?
Combining a Pebble with a Bam Bam effectively creates a three-way monitor, but housing the low-frequency driver separately has some distinct advantages. From a practical perspective it enables the Pebble to be disconnected for easy portability if you want to take your own monitor system – or at least the most vital part of it – on location or to another studio. From a technical perspective it means that the midrange and treble drivers can operate in an enclosure that’s free from colouration caused by bass frequency-induced box resonance.

The necessary hook-up cables are provided and they’re all high-quality items. The power link cable has multi-pin connectors with screw fixings – like high-quality valve microphones. Audio is fed to the Bam Bam, then routed into the Pebble via a short male-to-female XLR cable. If you’re using the Pebble without a Bam Bam, the audio signal connects straight to the Pebble and you can leave the power link cable disconnected. 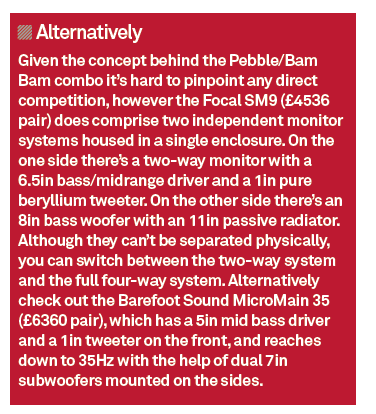 The Master Level control on the Bam Bam works in conjunction with the Level control on the Pebble, and trim controls for both boxes are hidden under plastic covers on the back of the Bam Bam. Compared to conventional satellite and sub systems there’s no guesswork when it comes to setting crossover frequencies and volume levels. Obviously you won’t need to worry about box placement or phase issues, either. Simply set them up, patch them together, turn them on and you should be good to go.

Together and Apart
Listening tests were conducted in two stages – with and without the Bam Bams. As regular nearfield monitors the Pebbles sound refined and spacious. Those who have become accustomed to folded ribbon tweeters might find the treble a bit soft, but others will perceive it as natural rather than hyped. The bass is ample and deep, with the type of solidity that many would associate with a sealed enclosure.

However, the fulsomeness of the midrange does detract from the clarity and detail to a small degree, and the stereo imaging isn’t quite as pinpoint as some other contenders at this level.

On connecting the Bam Bams it was immediately apparent that they’re far more than optional extras. The audio quality of the Pebbles was elevated from impressive to exceptional. The impression was that the system had been freed up because the midrange became far more open and detailed. Although the soundstage depth was already deep with the Pebbles, the addition of the Bam Bam really snapped the left/right imaging into focus and apparent volume increased.

Oddly enough, the bass doesn’t sound more prominent, but it’s noticeably deeper and much quicker to respond. Complex bass drum patterns bounce through the mix and it’s much easier to hear subtle groove details
that would otherwise be missed. In other words, the frequency response and the transient response times are both improved.

Better Together
We were able to spend quite some time with the review items and found we got used to them very quickly. It often seems to be that way with truly professional quality monitoring because there are no hyped upper mids or artificially extended high frequencies to skew your perception. We were able to gain fresh perspective on some mixes that were nearing completion, particularly in the balance between kick drums and basslines.

Splitting the boxes and using the Pebbles as a portable monitoring system is a great option and we’d be happy using them for location recording. But for the full-on, full-frequency experience the Pebbles and the Bam Bams are best used together. This is where the system comes into its own for critical listening. 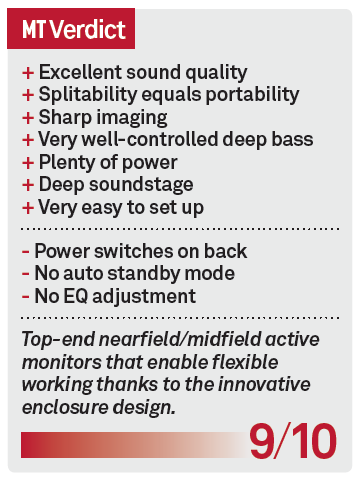