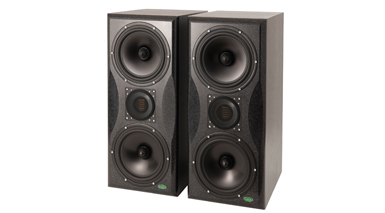 Unity Audio’s studio monitor offerings have always been hugely impressive. John Pickford checks out the latest release to see if it has managed to gild the lily…

Unity Audio has been in the studio monitor manufacturing business for several years now. We’ve followed their progress from the beginning, having heard an early version of their first product – The Rock nearfield monitor – back in 2011.

Since then we’ve tested all of its designs, including the Mark I version of The Boulder, which impressed us with its ultra-fast transient response, resolution of detail and clean bass. While the original Boulder was an exceptionally fine mid-field monitor, designers Kevin Van Green and Kevin Walker felt that it needed improvement, particularly in its low-end performance.

Speaking to MusicTech, Kevin Walker told us, “The MKI was very well received overall. However, we wanted to get more SPL out of it and, although the bass was very respectable with two 6.5in woofers, we wanted it to extend beyond its capabilities.”

Initially, they substituted the original Elac 6.5in (180mm) woofers with similarly sized drivers from other manufacturers before coming to the conclusion that to get deeper bass, you need bigger drivers. Experimenting with some 8in (220mm) drivers, the design team finally found the perfect solution with a design from Norwegian driver manufacturer SEAS. These feature cones made from stiff black aluminium and have been designed to eliminate cone-edge resonances and distortions that often occur in soft cones with rubber surrounds.

The new black drivers look a lot more conventional and a bit old-fashioned compared with the futuristic looking silver ELAC units they replace. However, the technology they employ is state-of-the-art.

The use of larger drivers has necessitated a larger cabinet, as the Boulder is one of the larger mid-fields on the market. As an infinite baffle design, the cabinet is closed with no bass-reflex port, which ensures that the bass response is fast, clean and tuneful. The materials used to construct the cabinet remain the same as those used in the earlier model, with 18mm Baltic Birch plywood used along with a handsome front baffle made from Corian, a material more widely used to make high quality kitchen work tops. The baffle is beautifully contoured with large radius edges that minimise unwanted reflections and cabinet resonances.

Other improvements over the original Boulder can be found in the choice of internal components, as Kevin Walker told us: “We added an input stage with very high quality ICs from Analog Devices and Burr Brown. The really good ones – the really expensive ones!” This, combined with the larger bass drivers and cabinet, has achieved the designers’ goal of increasing the SPL figure by 4dB and extending the bass response down to 33Hz. While these upgrades have made a noticeable improvement, other elements of the Boulder’s original design, such as the mid-range/tweeter unit and on-board power amplifiers, have been retained.

The ELAC Xjet dual coaxial mid-range/tweeter unit is a clever and unique design that couples a 5in, flat aluminium midrange ring radiator with a folded ribbon tweeter that extends up to 50kHz. As the tweeter is concentrically placed within the midrange radiator, the unit behaves as an acoustic point-source, eliminating phase anomalies that often occur when the midrange and high frequencies emanate from different points on the front baffle. This dual coaxial arrangement allows for uniform and even sound dispersion similar to that provided by electrostatic panel speakers, avoiding the somewhat divorced treble sound that plagues many inferior loudspeaker designs.

Custom Design
As The Boulder is an active monitor, it features on-board power amplification; the IEC power sockets are on the rear panel along with the amplifiers’ heat sink. These custom amplifiers were designed by Tim de Paravicini, one of the most respected amplifier designers in the business.

His company, Esoteric Audio Research, makes some of the finest amplifiers available today, including several audiophile valve-driven designs, although the Boulders’ exclusive E.A.R amps are top quality solid-state designs. The amplifier modules are identical to those used in Unity Audio’s smaller Rock MkII nearfield monitor, however the Boulder features four amplifier cards per cabinet, one each for the two woofers, midrange and tweeter. The amplifier is a discrete bi-polar design that delivers 100 watts to each of the Monitor’s four drivers.

On the back panel, where the balanced XLR input, power switch and volume pot reside, are three EQ controls. The first is a toggle-switch that offers +/- 2.5dB of high-frequency shelving boost or cut centred on 10kHz, while the second is a similar switch that offers +/- 2dB of broad midrange boost or cut. The third switch is a push-button that activates a High Pass Filter set at 26Hz. In our control room the Boulders sounded best with the mid-boost engaged.

Fresh out of the box we powered up the monitors and left them to warm up for 30 minutes before critical listening began. It was immediately obvious that the new Boulder possesses the Unity Audio family sound that we’ve come to know well. The company describes its range of monitors as brutally honest, and while we wouldn’t dispute that statement – they are indeed extremely revealing and transparent – they are far more engaging than many active designs that employ ribbon tweeter technology. Ribbons are amazingly fast compared to conventional dome tweeters – some loudspeakers that make use of them come unstuck when the mid/bass driver(s) fail to keep pace.

The Boulders avoid this pitfall by combining the midrange transducer with the ribbon tweeter in a single unit, in order to provide a point-source that integrates the midrange and treble seamlessly. This cohesive quality is what makes them sound so accurate and truthful without causing listener fatigue.

The trouble with so many studio monitors designed to be ultra-revealing is that they pull apart a mix, enabling individual elements to be heard, but then fail to put it back together into a coherent whole. Not the Boulders; it’s possible to track and mix on them for many hours and still feel fresh at the end of the session.

Tonally, these monitors are right on the money, with instruments and voices sounding incredibly realistic. They also have a tremendous sense of power and scale, and it’s not necessary to use them at excessive SPLs in order to appreciate it: they sound all of a piece from top to bottom at all volume levels. Transient response is also first rate, revealing lightening-fast leading edges and no flabby overhang. Stereo imaging is also excellent, making precise instrument placement within a deep and wide soundstage easy.

We have previously compared Unity Audio’s monitors with electrostatic panel speakers (which are often more tonally accurate than many box designs) and this is certainly true of the Boulders’ mid/treble delivery, which is both uncoloured and extended at the highest frequencies. Where they differ from electrostatics is in the bass department. It’s often said that with electrostatics, bass tends to drift from the panels with a lack of low-end grunt. There’s certainly no lack of bass-slam from these monitors.

Not only do they go low, they also remain incredibly taut and tuneful, making bass lines easy to follow without smearing. Again, the Boulders tell it like it is; if there’s proper low-end on the recording it will be heard in all its majesty. However, if the recording is bass-shy, they won’t sugar the pill.

As mid-field monitors go, the Boulders are on the large side and many studios will use them as their main monitors. Unity Audio has surpassed itself with its revision of the original Boulder. Combining the new, larger SEAS bass drivers with the superb ELAC Xjet mid/treble unit, it has created a tonally accurate monitor able to handle transients and dynamics with trip-hammer-like precision. With their increased power-handling and more extended bass, the Boulders can easily rival many bigger monitoring systems. True giant killers.