Universal Audio finally applies its studio-grade modelling expertise to a classic amplifier. Mark Cousins investigates the Fender ’55 Tweed Deluxe emulation…   Details Manufacturer Universal Audio Price £149 Web www.uaudio.com For several years now, the UAD platform has included a range of excellent amplifier simulators from the likes of Brainworx and Softube, but as yet, […] 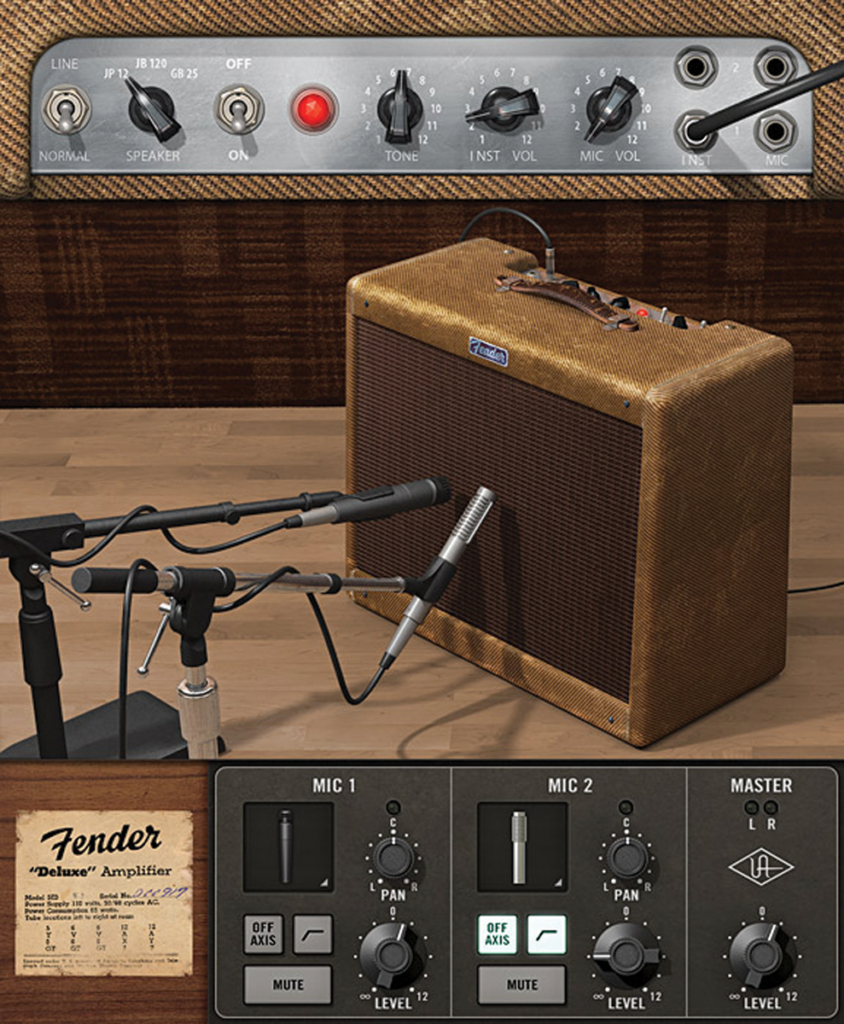 For several years now, the UAD platform has included a range of excellent amplifier simulators from the likes of Brainworx and Softube, but as yet, none have been developed by Universal Audio itself. With the release of the Fender ’55 Tweed Deluxe, though, we finally get to see Universal Audio’s expertise applied to a guitar amp.

Released in 1955, the classic 5E3 Fender Deluxe amplifier is an intriguing device, known for its unique and somewhat colourful response to the dynamics of the input. Compared to the significantly cleaner Fender Twin that followed a few years later, the Deluxe amplifier has a unique range of tones – from a soft and subtle tube saturation when the amp is driven lightly, to a raucous, overdriven tone when the amp was driven hard.

In short, it was an amplifier that responded to your playing, and despite a relatively simple set of controls, could produce a range of different timbres.

As you’d expect, the Fender ’55 Tweed Deluxe is a true end-to-end example of modelling: including the amplifier head, a number of different speaker cabinets, and a collection of studio-grade microphones used to record it.

While some amplifier simulators offer a ‘bells and whistles’ approach, the Fender ’55 Tweed Deluxe is all about tone – whether it’s switching between the Inst and Mic inputs, swapping speaker cabinets, or moving microphone positions. Ultimately, it’s these key parameters – rather than a host of FX pedals – that deliver a truly great guitar sound.

Whether you’re a guitar player, or simply a producer using the plug-in as a re-amping tool, what becomes immediately apparent is just how dynamic and responsive the ’55 Tweed Deluxe feels. Take the Tone control, for example.

Being more than just a rudimentary filter, the Tone actually doubles as another form of gain control (in addition to the Instrument Volume and Mic Volume controls), making the amplifier increasingly overdriven as you push the control harder. Like plenty of examples of classic vintage gear from yesteryear, therefore, an apparently simple control setup conceals a complex set of sonic interactions.

Another pleasingly studio-friendly feature is the Mic Setup section, which includes various classic Dynamic, Ribbon and Condenser microphones. What’s particularly useful is the ability to use two mics simultaneously, either to mix and match different timbres, or to create a pseudo stereo effect by panning two mics left and right respectively.

With the addition of an off-axis positioning control, perfect phase alignment, and a bass roll-off control, if felt as close as possible to walking through to the studio area and mic’ing the amp yourself.

One last modelling detail worth picking up on would be the pairing of the Fender ’55 Tweed Deluxe plug-in and a Unison-powered Apollo interface. In this case, the plug-in actively changes both the impedance switching and gain staging, based on which of the virtual inputs you select, injecting another further layer of realism into its sonic behaviour.

Other amplifier simulators include versions of the tweed amplifier, including Native Instruments’ Guitar Rig 5 (£169), and IK Multimedia’s AmpliTube Fender (€163).

However, both solutions provide a wide range of amps beyond the basic tweed amp setting, so the modelling isn’t as detailed as what’s provided on the UAD version. 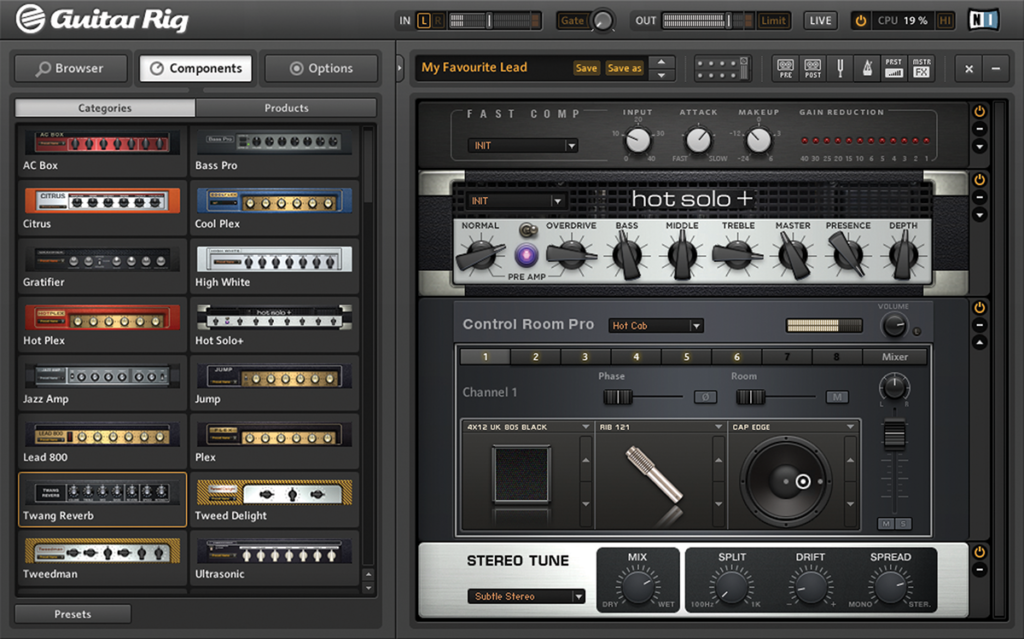 Without any doubt, the Fender ’55 Tweed Deluxe is arguably the most authentic and sonically detailed emulation we’ve seen of any guitar amplifier to date, complete with a level of dynamism and musicality to match.

As you’d expect, there’s a massive hit on DSP resources, so that even on an OCTO-powered UAD device, you’ll struggle to run more than eight instances. Ultimately, you quickly realise why the plug-in is best run on the front end of an Apollo interface, where you simply ‘record through’ the plug-in, rather than run multiple instances.

For non-Apollo users, though, there’s always the option of bouncing/freezing the track, if you want to claw back some DSP resources.

As always, the best plug-ins – especially those that use distortion – come at a premium, but given the sheer amount of musicality you get back from the Fender ’55 Tweed Deluxe, it will be an investment that reaps dividends.

It’s certainly an excellent and logical choice for Universal Audio’s modelling expertise, and may indicate a string of products (a Fender Twin would make us very happy!) that could follow in future software updates. 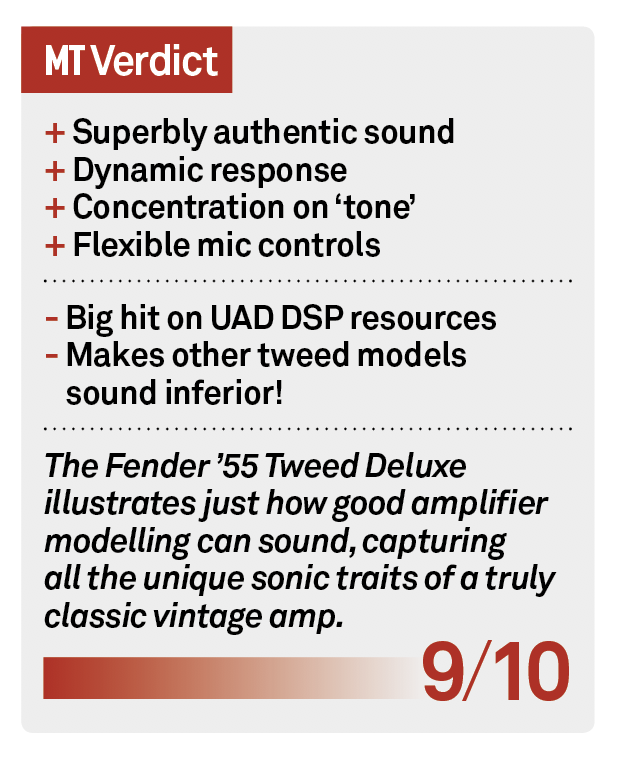