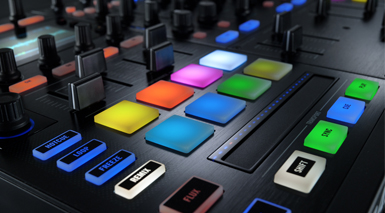 Getting hands-on with your DJ hardware is always a good thing, but has NI just raised the bar to new heights? Hollin Jones tests the Traktor Kontrol S8… 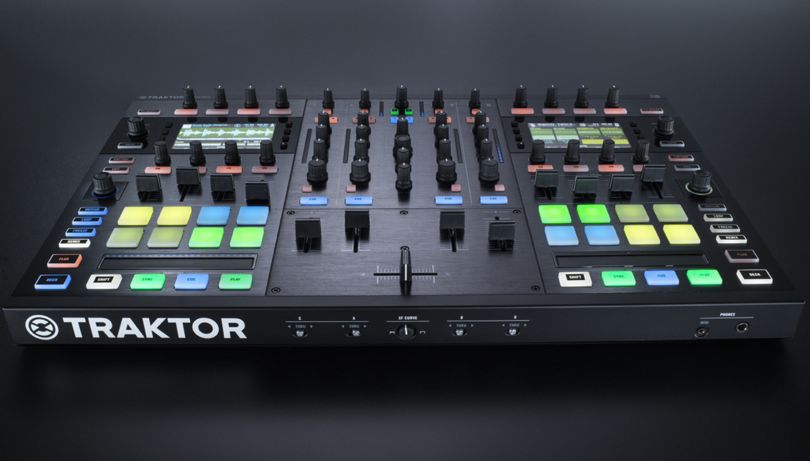 Native Instruments has been making hardware for longer than you might imagine. Although for the first decade or so of its existence it was almost exclusively software-focused, it has spent much of the last decade building a seriously impressive line up of hardware products.

These all tie in with its software, the company effectively going for an Apple-style approach of developing a hardware and software ecosystem that gives them much greater control over the user experience. And so it is that you now have three distinct product types.

The S8 is the most advanced Traktor controller NI has ever made.

Smaller models still remain in the lineup, of course, as not everyone will need the expanded functionality on offer here, but this is a serious piece of kit. It’s instantly recognizable as an NI product, with build quality as good as you would expect.

Where some other high-end DJ controllers have had a chunky design so as to slot into equipment racks in clubs, the S8 is much flatter and shallower, just under 7cm thick in fact.

It would seem to be designed to sit on a surface rather than being plumbed into a rack and to this end it has rubber feet and also six anchor points on the underside which allow it to be fixed down using screws.

Sound and data is sent back and forth to your Mac or PC down the USB connection but you can do much more than just play tracks without touching the computer: the S8 is also a standalone mixer and an audio and MIDI interface in its own right. Of course when you DJ you need not just to control playback but also incorporate other sound sources like turntables or CD decks and get sound out to the PA as well as monitoring.

Rather than having two or three devices to achieve all this, here you get a single box. The fact that it only needs a USB connection means the computer acts as the brain, doing all the audio and effects processing, but you don’t have to spend much time interacting with it.

The hardware is designed to place as much of Traktor’s functionality as possible onto the unit.

Plugging In
Anyone who’s serious enough about DJ’ing to require the might of the S8 is going to want lots of I/O, and they’ll certainly get it. On the rear panel you’ll find a host of ports starting with power and USB, and conventional MIDI in and out sockets for connecting external gear.

There are four sets of phono inputs for connecting turntables or other sources to the four channels A-D as well as a Ground terminal, and two microphone inputs, one XLR and one jack connection.

The phono inputs have switchable line / phono to adjust for different input types. Then there are stereo booth outputs for sending sound to your local monitor system and a Main Out section for connecting to the PA with both RCA and balanced XLR socket types. A lock port is also provided in case anyone tries to walk off with it.

The front panel also has some hardware features like a headphone section with two connectors, one small and one large headphone jack so you can listen to the cue output as well as the main mix. There are crossfader assign switches so that each channel can be assigned to the left or right side of the crossfader, or bypassed by leaving it in the central position.

Finally a crossfader curve knob changes the way the crossfader behaves. With a smoother setting you can transition gradually between signals. Set to a more extreme curve the crossfader works almost like a switch, which is better for scratching.

Mode Selector
The hardware comes with a copy of Traktor Scratch Pro 2, which is the same as Traktor Pro 2 but adds timecode functionality so you can use it with special timecoded discs. As you would expect it’s all tailored to work automatically so you can connect the S8 and fire up Traktor with basically no setup.

Traktor’s software preferences gets a new tab where you can make some settings for the hardware like touch strip sensitivity, LED brightness and calibrate touch controls. It’s worth mentioning that you can use the S8 without a computer by connecting your turntables and mics and treating it like a regular mixer. In this mode the left and right sections are knocked out but the central mixer section is active. 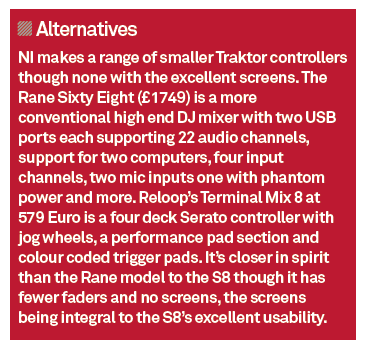 The faders, cue, filter and EQ controls all work independently of Traktor, as do the mic inputs. Even when you are hooked up to a computer, a Traktor button on each of the four channels lets you switch between Traktor and standalone mode for that channel.

NI has gradually been building support into its flagship products for much better browsing of software from hardware and the S8 gains two large colour displays similar to those found in Maschine Studio.

Simply touch either of the Browse buttons (they are touch sensitive so resting a finger on one will call up the browser) and you can navigate your library and load a track. When you do you will see the same waveform display on the screen that you would see in the software.

By using the eight buttons to the side of each screen you can perform a good number of actions like zooming, adjusting beat grids and seeing what’s loaded in your alternate deck. Hitting the Deck button toggles between decks A/C and B/D.

Hands On
Getting hands-on control of your effects is key to a lot of performances and the S8 makes this easier than ever. At the top of each deck section is an FX section and the Browse button lets you graphically choose any effect and load it.

The four knobs running along the top are also touch sensitive so you can tap them to see current effect settings without having to change them first. When you do, a small display pops up on the screen to show you the effect parameters that each one controls.

The four buttons activate secondary controls which are specific to each effect parameter. Two effects units are active but you can change this and if you do, the performance controls mid way down the S8’s front panel are assigned to control FX units 3 and 4 so you have complete control.

One of the biggest changes from previous flagship Traktor controllers is that the large jog wheels have been removed, to be replaced by much smaller but more versatile touch strips. Located at the base of each control section, these have LED feedback and can be used to control track position by simply dragging your finger left or right.

Hold the shift button and you can quickly move through the whole track, and rubbing with a finger produces a scratching effect.

They can also be used for bending tempo when syncing tracks and as beat phase meters. It’s true that this is a different approach to navigation than some DJs will be used to but it works really well and means that far more space is available on the hardware for other controls.

It’s also nifty when combined with Traktor’s Flux mode where you can jump to cue points and loops without losing the position of the original track. A virtual playhead carries on and when you’re done experimenting, leaps you back to where the track would have been. 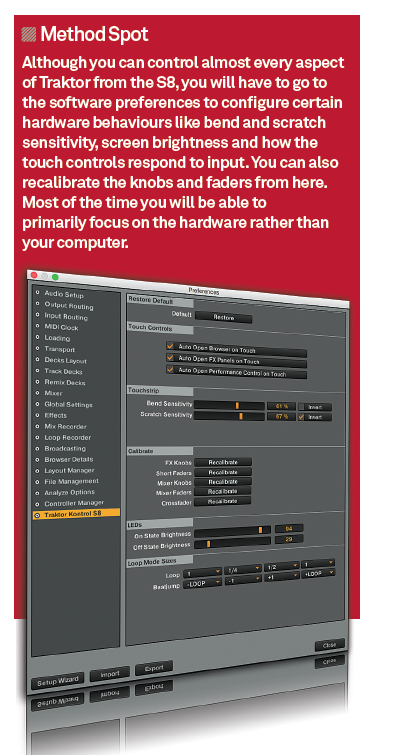 nd Slice
As well as conventional stuff like setting cue points and loops which are made a lot easier thanks to the visual feedback on the two screens, the S8 gives you hands-on control over other stuff too. Freeze mode is tremendous fun, mapping slices of a loop to the eight performance pads.

The Performance section is really powerful and as well as letting you work with Remix sets easily, allows you to capture sections of tracks to the performance pads and then drop them back in over the top of other tracks. You’ll need some skill to get it right every time, but it’s easier than you’d think. Snap and Quantize can be switched off from the hardware if you need complete freedom to perform.

If you are an experienced user of Traktor on the desktop the thing that really strikes you about bringing the S8 into your setup is the incredible way in which it brings out the functionality of the software.

Remember that you are controlling software here : most of what you are doing is already present in Traktor itself, but the tight integration between software and hardware means the tools are more or less all there in front of you to see, all the time. No toggling sections and very little use of submenus or shift clicks.

Super 8?
The use of the colour screens is what sets the S8 apart from any other Traktor controller. It gives you all the visual feedback you need to beat slice, edit, perform remix sets, navigate tracks and assign and tweak effects. I found myself hardly ever looking at the computer while using the hardware.

As a DJ interface it’s excellent too, with high quality converters and plenty of I/O. By definition the connectivity is DJ-centric (lots of RCA ports) but it will work as a generic audio and MIDI box with your Mac and PC for any software.

Removing a computer from the equation entirely, the mixer section, EQ, filters and mics work independently so analogue DJ’ing is perfectly possible too.

The S8 is a serious piece of kit but it’s also a wonderfully realized meeting of hardware and software, beautifully engineered and extremely well thought out. It’s a flagship product with a price to match (though street prices are lower), but it will reward you by unlocking Traktor in ways you never thought possible.

In fact by placing so many controls at your fingertips, clearly laid out and with colour coded backlit buttons, there’s a strong case to be made that it makes Traktor significantly easier to understand and use effectively. It’s going to be overkill for hobbyists but if you are serious about DJ performance it’s the perfect way to take your sets to the next level.