Getting an authentic post-rock drum sound was a hassle – until now. Hollin Jones tries out Toontrack’s new EZX Post-Rock collection Details Price £41.95 Distributor Time and Space Contact Via website Web www.timespace.com System Requirements EZDrummer 2 or Superior Drummer 2.4.0 It’s common practice in the music technology world to build a product that can then be expanded […] 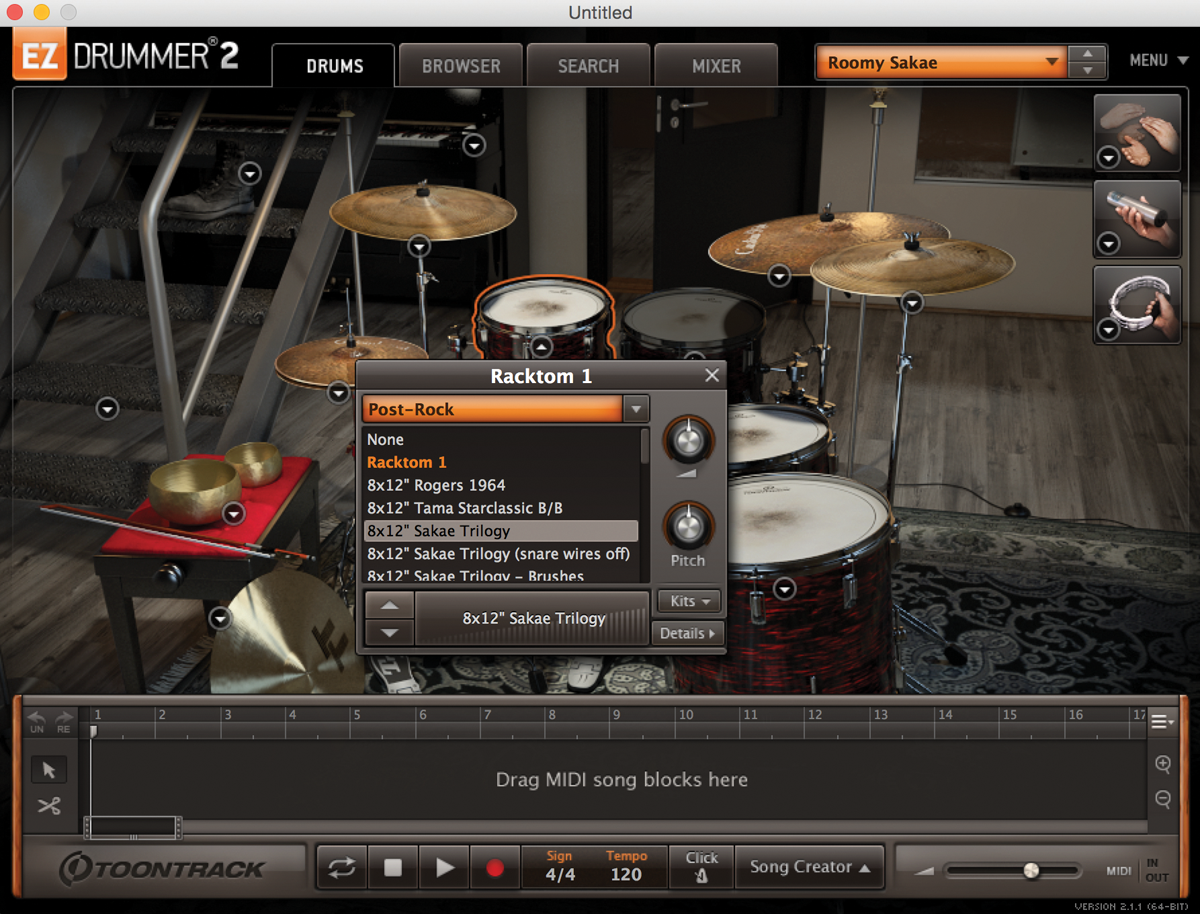 Getting an authentic post-rock drum sound was a hassle – until now. Hollin Jones tries out Toontrack’s new EZX Post-Rock collection 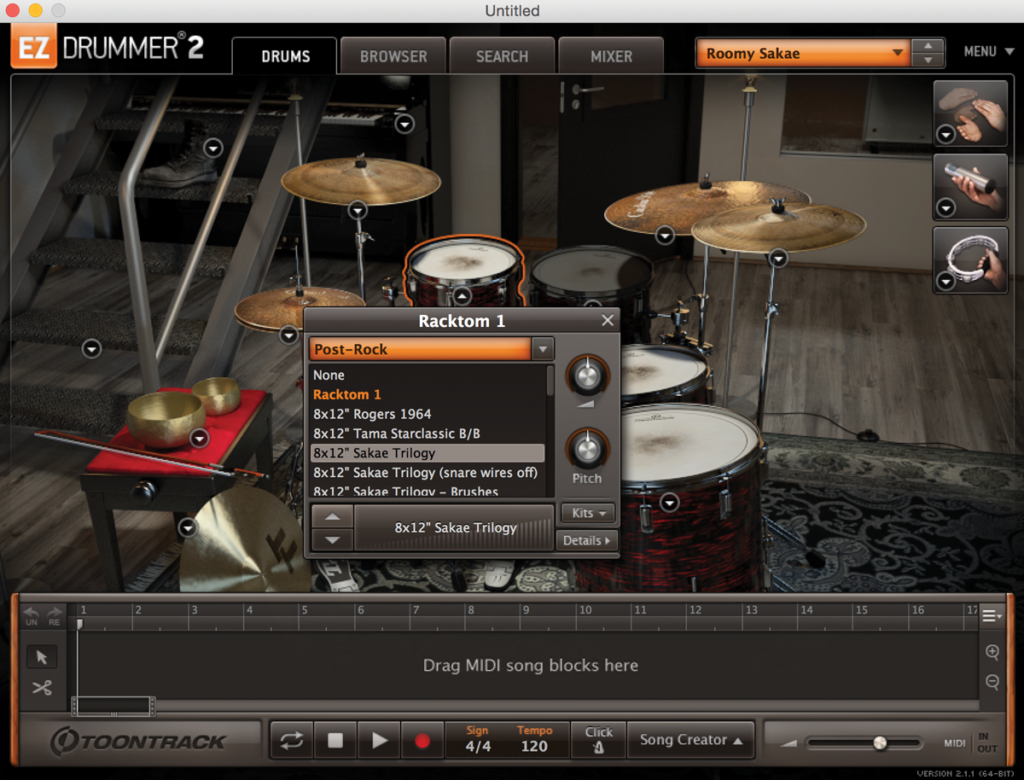 It’s common practice in the music technology world to build a product that can then be expanded with sound packs. Not only does it mean you can extend the scope of your instrument without re-engineering it, it also allows your customers to buy only the content they need. EZX Post-Rock is Toontrack’s 26th expansion pack for EZDrummer and Superior Drummer.

Post rock is about two decades old as a genre, a uniquely cinematic style of music, very often instrumental and composed with dynamics and textures as much as verses or choruses. Although atmospheric, it usually has a decisive rhythm and is slow- to mid-tempo. Sometimes it’s gentle and other times ear-splittingly loud.

Rock Out
One of the first post-rock bands to be recognised as such were Mogwai, but a slightly different stylistic approach was taken by Icelandic band Sigur Rós, and it’s in their studio in Reykjavik that this collection was recorded. In a world where we can suffer from overload of the sheer amount of sounds available, these more niche collections that sample either specific equipment or a specific location or both are becoming more popular.

The recordings were made inside an empty swimming pool – the kind of acoustic environment that really is unique, and has lent its character to recordings by Spiritualized, Jon Hopkins and of course Sigur Rós. The idea here is that you can get the same character for your drums without having to go to Iceland in order to do it. 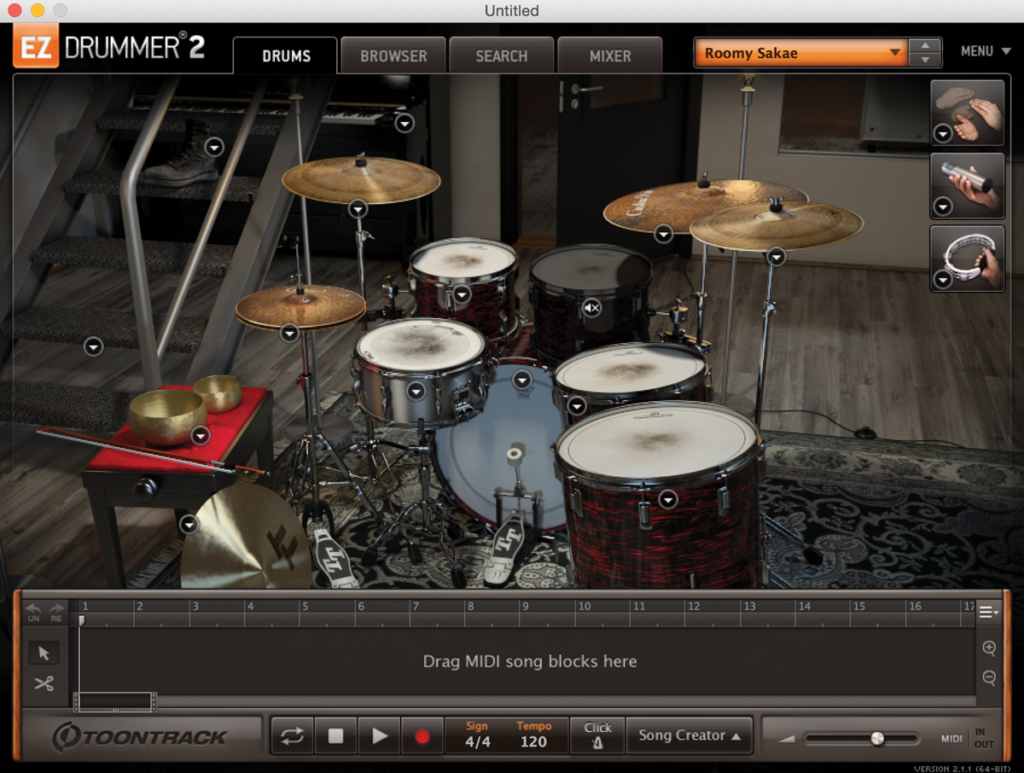 The collection runs in EZDrummer 2 or Superior Drummer 2 and as a plug-in or a standalone application. Weighing in at just under 4GB, it isn’t massive but can be relocated to an external drive if you have limited space on your boot drive. You get four complete kits sampled with sticks – Rogers, Tama, Yamaha and Sakae – and one kit sampled with brushes, felt mallets and a ‘snare off’ option.

In addition, there are six custom percussion pieces and a decent selection of MIDI grooves that you can use to trigger any of the kits. In terms of presets, you get 11, comprising the various kits processed in different ways. You can customise and save your own kits, with the software’s interface making it easy to swap out individual instruments and tweak the mix using the onboard mixer. There are effects too, though users of the more entry-level EZDrummer can only change settings, not customise the effects chain.

There’s a huge sonic difference between rock and post rock, even though the names might suggest otherwise. The drums are an expressive instrument in their own right, playing as much of a role in the development of a track as any other instrument.

In straight-up rock music, they’re often there just to keep the track driving along. As such, the drums here have more character. Great care and attention has gone into the recording, but these instruments have bags of character purely in themselves. So although there are effects used, they tend to enhance rather than smother the natural feel of each individual drum.

Iceland, Baby
The drums are earthy, organic and powerful, and instantly recognisable as the sound of bands like Sigur Rós. You can mix onboard, or if you’re in plug-in mode route any of the 16 channels out into your DAW’s mixer to get control over things such as adding third-party plugs.

As well as a good selection of conventional drum types, you get bowed cymbals, a singing bowl, trash gong and even footsteps and piano percussion sounds. So there’s more to it than kick, snare, cymbals and toms, and these additions bring an extra layer of atmospherics and flexibility.

This collection captures that cinematic, epic post-rock sound and puts it in a format that makes it easy to program your own beats. It’s easier than flying to Reykjavik with your drum kit. 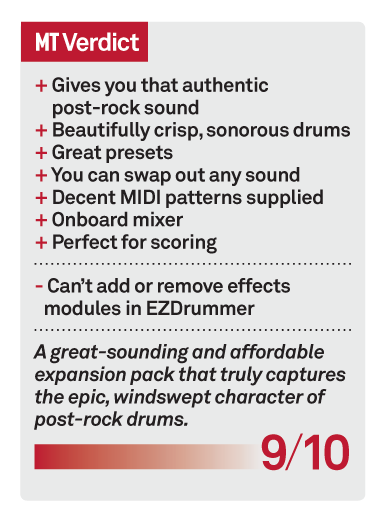