If you’ve ever struggled to get your CVs to keep your pitches straight, you might just need this major new release from Tiptop Audio. Dave Gale gets scalic and modal… Details Manufacturer Tiptop Audio Price £299 (street price) Contact Tiptop Audio – contact@tiptopaudio.com Web www.tiptopaudio.com Quantisers! What are they? Well, put simply, they take an […]

If you’ve ever struggled to get your CVs to keep your pitches straight, you might just need this major new release from Tiptop Audio. Dave Gale gets scalic and modal…

Quantisers! What are they? Well, put simply, they take an incoming CV signal, often from a source such as a LFO, and convert it into a perfectly pitched CV which is drawn from a (normally diatonic) scale, or set of notes, as assigned by the user.

Beyond this, they can also be really useful if you have a linear sequencer, as the quantiser will tighten up the pitches into something scalic – making the whole task easier, rather than a complete chore. Or, put another way, think of a quantiser as being an ‘autotune for Eurorack’, but working with control voltages (CVs) rather than audio.

Okay, so now that’s cleared up, let’s talk specifics. All quantisers are not as you might hope. I’ve had a couple in my time and found them to be slightly painful to use, partly because of the confines of the Eurorack form’s real-estate, but also because more often than not, they adopt a multi-button-press form, requiring either a very good memory, or a hunt for a manual.

They often try to do so much that they become confused in use, so when I saw an announcement for Tiptop’s QuantiZer, I was immediately struck by the relatively large form and by the layout and tempting controls – all of which had lights and legends next to them, so on the face of it, it looks pretty easy to work with.

“Think of a quantiser as ‘autotune for Eurorack’, but working with CVs, not audio”

Upon removing the QuantiZer from the box, I’m liking the new Tiptop livery – which is a cool shade of white cream instead of the silver faceplate, previously adopted.

Powering it up, there are LEDs galore; most notably to the right of the module, where the chosen scale can be clearly seen via the mock piano keyboard. There is also a long-throw fader adorning the centre of the panel, which will assist with a number of duties, notably data entry.

Moving toward the operation side of QuantiZer, you can call upon one of 48 scales, which break down to 12 of each of major and minor, and another two banks of 12 user-based scales. Now the word ‘scales’ can be a tad misleading here, because a user-saved patch doesn’t have to be a complete scale, in the traditional sense.

I often find myself setting quantise notes to an open fifth (for example, C and G), which can be especially useful when working with random CV-generating devices, such as Sample & Hold CV generators (LFOs). Having said that, I also love working on the fly, so I will find myself continually changing the notes on the QuantiZer to reflect the harmony that I want. It’s one of the real attractions of having a laid- out musical keyboard on a quantiser. 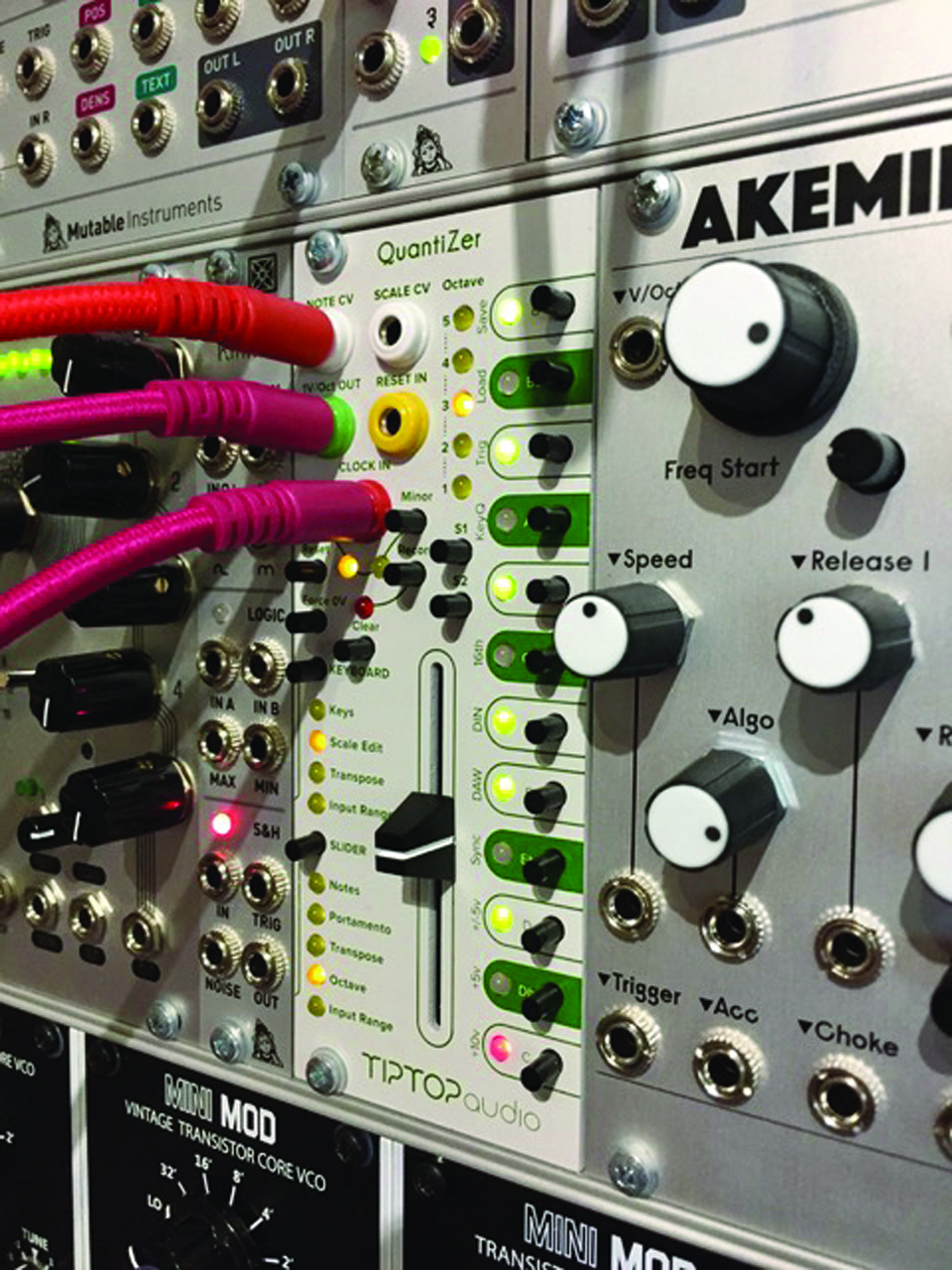 QuantiZer has some great tricks up its sleeve. Mode and setup are handled in two ways; the ‘keyboard’ section offers the ability to control the basic functions, such as the Transpose option and Input Range control. The former is excellent for immediately shifting your incoming CV to any pitch and the QuantiZer reacts to this beautifully.

“If you need a quantiser – frankly, who doesn’t? – this should be high on your agenda”

There is also CV control of this element, and with a Pressure Points patched in, I was able to drive the transposition from a touch plate, although it’s pretty easy to just hit a note on the QuantiZer keyboard to get the same result. Meanwhile, the second section, named Slider, offers very similar elements of functionality, but with data entry from the aforementioned Slider.

The Notes mode could almost be considered a ribbon controller or theremin mode, as it’s possible to literally ‘play’ the slider. One much more usable element here is the ability to
dial in the amount of ‘portamento’ you may need. Not surprisingly, there is a strong hook-up with another Tiptop stalwart, the Circadian Rhythms, which offers a connection via Sync bus, for complete autonomy – but it will also play nicely with other Tiptop products, such as the Z8000 Matrix Sequencer. If your sequencing duties aren’t handled by either of these products, the Clock input and Reset input will allow things to sync well, as they did in my case – super tight and very accurate.

The QuantiZer also includes a degree of future proofing, as it has a USB socket around the back which will allow the user to update the firmware, as further releases become available.

In use, the QuantiZer just seems to work, with all the lights of the scale flashing as you would expect, but there is also an Octave display, which is particularly useful for seeing exactly which range you are in; very handy considering today’s glut of frequency- sweepable oscillators.

Like any good product, the QuantiZer just sits there and reliably does its stuff. The lag time is non-existent (according to Tiptop, less than half a millisecond) and pitch centring felt tight across all five octaves.

I have to say that in operation, the Octave lighting is a really useful feature, as is the ability to set the range on the fly.

It has to be said, when it comes to quantisers, this one is the best I’ve used to date. It’s nice and accurate across the range and has a flexibility and simplicity of use that I’ve always yearned for in a quantiser.

For me, access to a western-style keyboard layout is essential, as I love changing things while in full swing, but if you’re not overly confident with musical theory, the presets and user storage locations will serve you well.

Elsewhere, immediacy runs through the QuantiZer, which is to be applauded, as it’s always good to see exactly what’s going on. If you need a quantiser in your rig – frankly, who doesn’t? – this should be high on your agenda to try out. 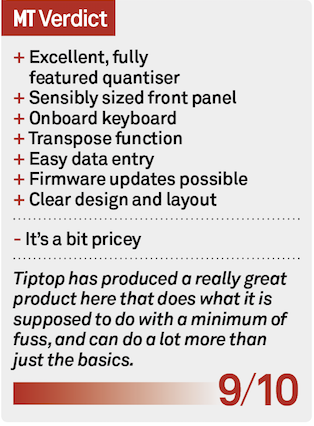