To celebrate its 15th anniversary, Thermionic Culture has released a new valve compressor. John Pickford sizes it up Details Price £1,872 Contact Thermionic Culture 01279 414770 Web www.thermionicculture.com Amazon.co.uk Widgets Back in the 1960s there were many who thought that solid-state technology would make the thermionic valve a thing of the past. Thankfully, Vic Keary wasn’t one […] 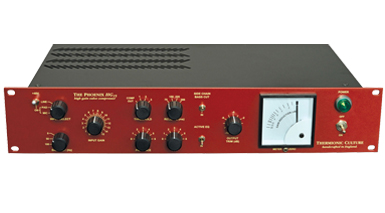 To celebrate its 15th anniversary, Thermionic Culture has released a new valve compressor. John Pickford sizes it up

Back in the 1960s there were many who thought that solid-state technology would make the thermionic valve a thing of the past. Thankfully, Vic Keary wasn’t one of them. Vic has been designing and building valve equipment for more than 50 years, while his Thermionic Culture company is currently celebrating its 15th anniversary. To mark the occasion he has launched a couple of new units, including the single-channel compressor we have here. We make no secret of the fact that we are huge fans of the Thermionic Culture range; we regularly use the Earlybird mic pre with Pullet passive EQ, the Freebird equaliser and this review unit’s big brother, the Phoenix stereo compressor.

The HG15 differs from the original two-channel Phoenix in several ways. Firstly, the increase in gain from 28dB to 53dB makes the HG15 capable of amplifying signals from most microphones, with phantom power provided for condenser types. Secondly, the unit features what Vic modestly describes as ‘some basic EQ’, although in practice both the Presence and Air active lifts have some very powerful and musical tone enhancement.

Presence offers six degrees of mid-lift peaking at around 3kHz, while the Air control operates at 10, 13 and 18kHz, with both narrow and broad bandwidth boost. The bass-cut switch, selectable at either 50Hz or 100Hz, has been designed to reduce the proximity effect of close-mic’ing, while the sidechain bass cut prevents the compressor from over- responding to frequencies below 100Hz.

The Gain Game
Like all Thermionic Culture units we have used, the HG15 looks and feels well-built, utilising top-class components and sporting a handsome red finish and well laid-out user controls. Input Gain and Output Trim appear on conductive-plastic Omeg pots, which are designed to eliminate DC crackle, while the switches are high-quality Alpha types. Input and output valves are Electro-Harmonix 6AQ8 and JJ ECC81 respectively.

Although marketed primarily as a compressor, the mic-gain and EQ features make this a much more versatile piece of kit than a standard compressor. As Vic points out, this is about as close to a fully featured channel strip as he is likely to produce.

While the Phoenix HG15 is indeed a high-gain compressor, the amount of input gain available for microphones isn’t as high as you would expect to get from a dedicated mic pre. This isn’t a problem for the vast majority of condenser and dynamic types, but sensitive designs, which would include many ribbon models, might need a bit more gain than the HG15 has on tap. Having said that, we connected our trusty Coles 4038 ribbon to the unit and found that we could just about get away with it on a reasonably loud electric guitar amplifier; however, we soon ran out of puff when attempting to capture delicately picked acoustic guitar. Interestingly, 48v phantom power is activated via a spring-loaded switch so it can’t be accidentally engaged and kill your beloved ribbon.

Big Squeeze
The compressor itself is a delight to set up and use, having five stages of Threshold control and six Time Constant settings, so offering a variety of compression settings that can be selected swiftly. This control is similar to that found on the classic Fairchild 660 (and its stereo counterpart, the 670), surely the most highly revered of all vintage compressors, largely due to their use on Beatles recordings. This arrangement negates the need for individual attack and release controls, instead offering six musically useful settings that offer various combinations of fast, medium and slow response times.

While there’s always a place for dynamics control that requires precise response-time control on continuously variable pots, it is often desirable to have a unit like this, which allows quick set-up, especially when tracking vocals; singers can quickly lose motivation if asked to repeatedly run through their part while levels are adjusted.

During our testing we used the HG15 when tracking both lead vocals and a stack of harmony backing vocals, using a combination of Neumann U67 and AKG
C414 condensers as well as a Beyerdynamic M88 dynamic. To get decent level, the unit was often used at full pelt, with close to maximum input gain and no reduction of output level. Selecting the medium attack/fast release option we were able to achieve excellent results with just the occasional change of input and threshold settings.

Both the Bass Cut and Side Chain Bass Cut were used to great effect and we also switched-in a little of the Presence and Air EQ lifts on occasion. Care must be taken here, though, as the EQ can be quite seductive; we soon discovered it’s easy to get carried away and apply a little too much sweetening.

We compared the HG15 to our regular Thermionic Culture signal-chain of Earlybird mic pre and original Phoenix compressor, finding the new unit to have a more focused midrange sound that seemingly adds energy to all manner of instruments and voices. This edgier, dynamic presentation lends itself to many pop singers, and the combination of our dark-sounding valve U67 and peppy HG15 was simply delicious. Anyone who thinks that all valve gear sounds overly warm, lush and syrupy should listen to this unit; the sound is rich, detailed and beautifully rounded.

The Phoenix HG15 was also pressed into service at the mixing stage, when we tried it on kick drum and bass guitar before strapping it across a frantically strummed acoustic guitar track. Here, the compressor really made its mark, helping the part to sit nicely in the mix level-wise, but still cut through by making judicious use of the Air and Presence boosts.

Once again, Vic and his team have come up with a product that sounds absolutely gorgeous while being pleasantly user-friendly – you really can’t go wrong with this. It is one of those units that sounds good on just about anything, imparting its own sonic charms in a musical and thoroughly satisfying way, just like those lovely but prohibitively expensive old Fairchilds. Some may criticise the Phoenix for not being completely neutral or transparent; however, transparency can often mean lacking in character, and that’s an accusation that cannot be levelled at the HG15. Thermionic Culture’s new Phoenix HG15 has a wonderful, vibey character that will never fail to inject its mojo into your productions. 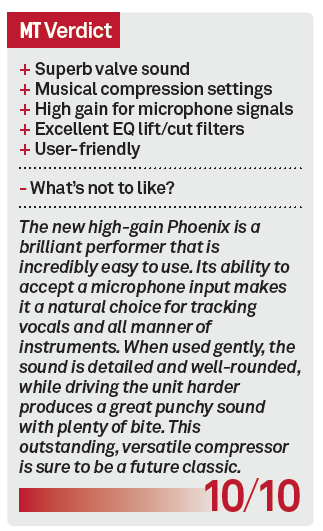 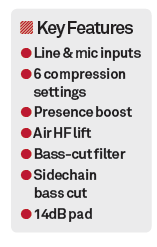