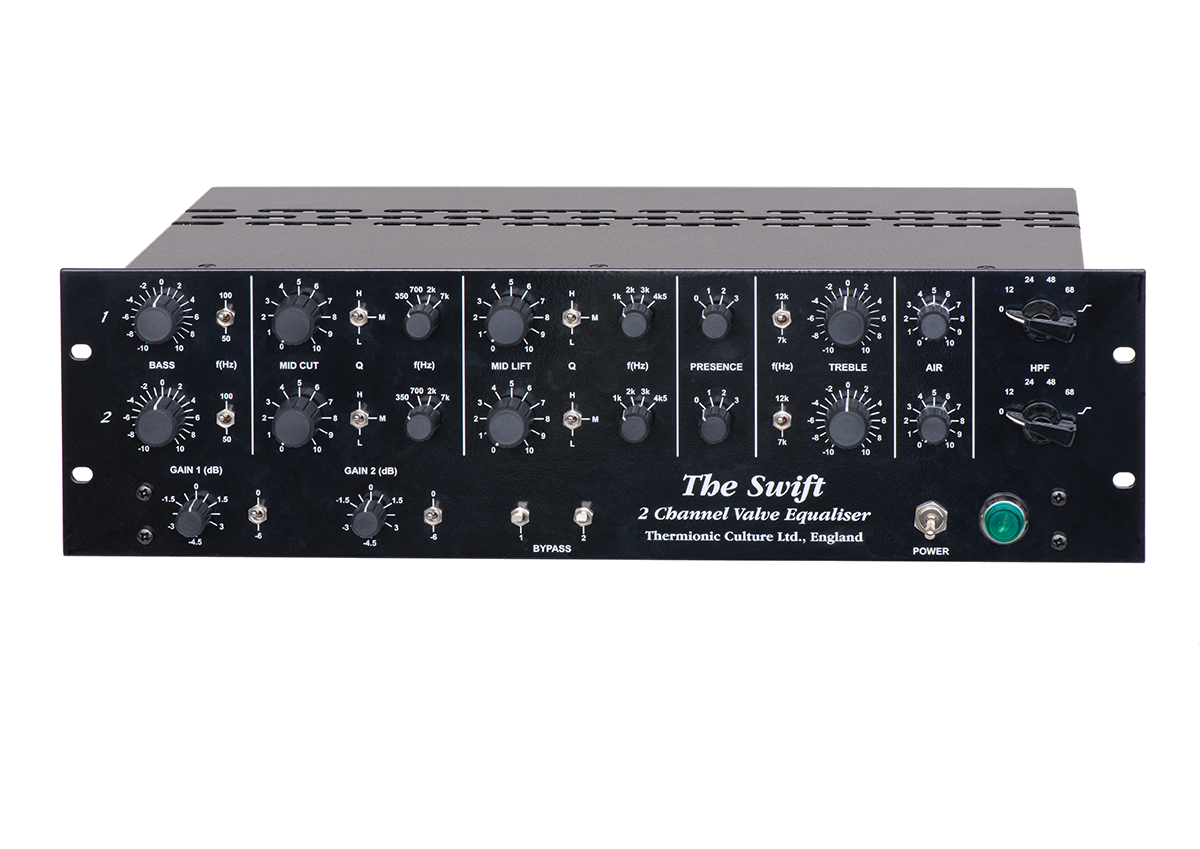 Thermionic’s latest EQ is a replacement for the Freebird 3-channel EQ, but comes with some additional goodies. Just how high can the Swift fly? asks John Pickford… 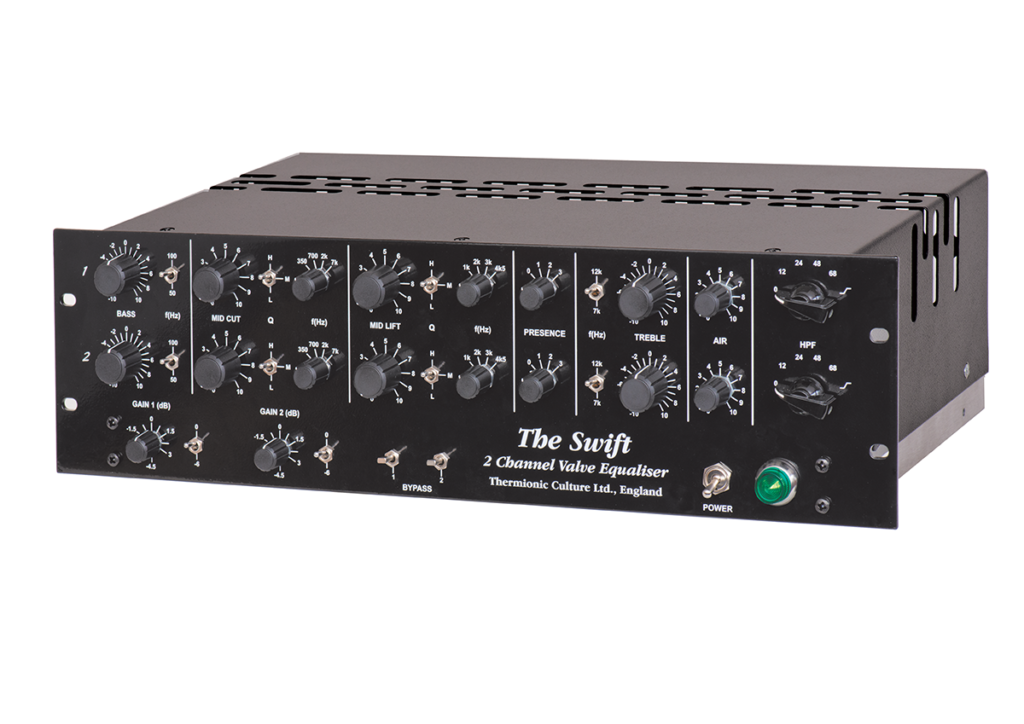 As its name implies, Thermionic Culture makes pure valve equipment exclusively, with a range including microphone preamplifiers, compressors, summing mixers, distortion units and, of course, equalisers. The Swift is a two-channel equaliser that’s a replacement for the three-channel Freebird EQ. That was a 4U, half-rack unit, designed to be part of a modular system alongside the similarly sized Nightingale mic-pre; The Swift is a more conventionally sized 3U 19-inch rackmount unit.

Built into the chassis of the Phoenix compressor, the Swift comprises EQ features found on the discontinued Freebird as well as other Thermionic Culture products, such as the Rooster 2 and Phoenix HG15, reviews of which can be found on our website.

Now, I’ll come clean and declare that the out-going Freebird has been my favourite EQ for broad, musical tone shaping since it was launched around five years ago. Similarly, the Phoenix HG15 – a high-gain compressor that doubles up as a microphone/line preamp – features a wonderful Air control (extreme top-lift) that finds its way on to many of my recordings.

The new Swift combines the very best of British EQ design with features found on renowned US equalisers, namely the Pultec EQP-1A, which must surely rank as the most revered valve equaliser of all time. The main active ingredients are based on a 1950s EMI mixing desk, similar to the REDD consoles used at Abbey Road studios during the 50s and 60s, which featured a Baxandall-type EQ providing shelving equalisation for bass and Treble.

Bass frequencies can be boosted or cut by 11dB, with peaks and troughs centred on either 50Hz or 100Hz, selectable via a toggle switch, while the Treble control operates in a similar fashion with centre frequencies of 7kHz and 12kHz. Unlike the Freebird, which made use of indented, stepped pots, the controls on The Swift are continuously variable, allowing for smooth operation. Front-panel markings, however, are both clear and detailed, making precise stereo settings easy. Furthermore, TC told me that it has chosen not to use indented pots for subtlety, and because the continuously variable pots are more reliable. 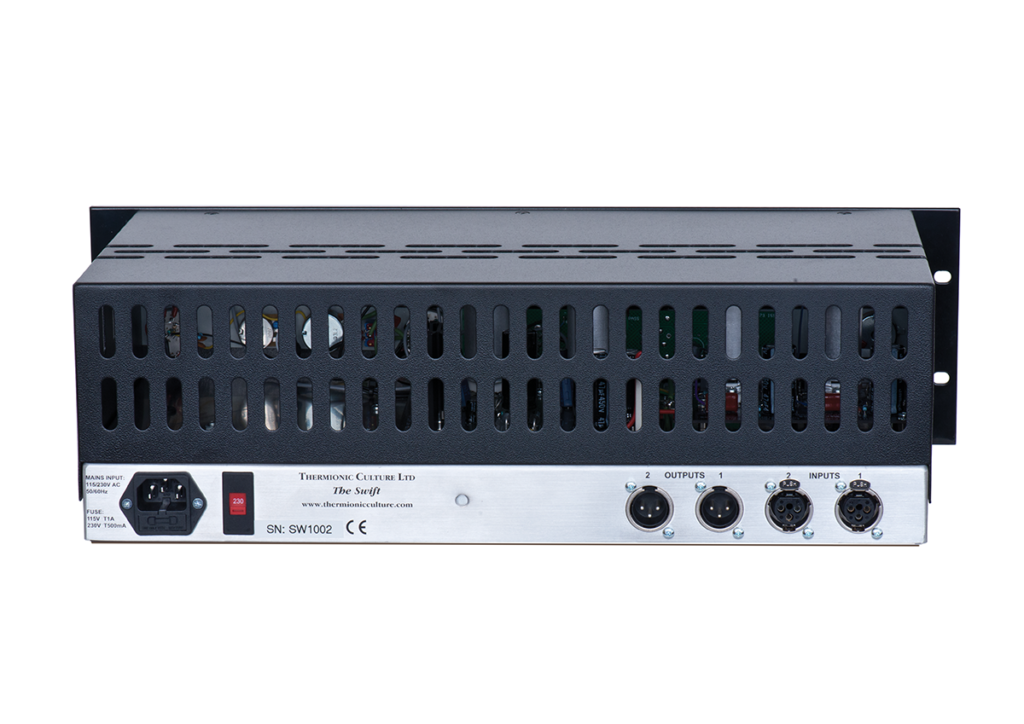 Thermionic Culture’s chief designer Vic Keary invented the Presence boost found on The Swift in 1963, when he modified Lansdowne Studio’s EMI-built console that had been designed by pioneering producer/engineer Joe Meek. This control, unique to this equaliser, works partly as a high-pass shelf, then develops into a broad peak centred on 900Hz, 2kHz or 4kHz before gradually tailing off at the upper range of the curve. These Presence settings, which are activated via a rotary switch, offer around 4dB of boost at their peak centre points.

The Mid Cut and Mid Lift controls are passive designs, with the Lift section based around the classic American Pultec EQ. Both sections offer four selectable frequency points and three Q settings, with the higher Q settings providing a sharper and more powerful amount of boost or cut at the selected frequency centre point. The Mid Cut offers a maximum reduction of 15dB at the highest setting, 10dB at medium Q and 5dB at the lowest and gentlest setting; available frequencies are 350Hz, 700Hz, 2kHz and 7kHz.

Mid Lift operates in a similar way, with a maximum boost of 17dB at the highest Q setting, along with 10dB and 8dB at the two lower settings; 1kHz, 2kHz, 3kHz and 4.5kHz are the centre frequencies of the Mid Lift control.

One feature lacking on my beloved Freebird EQ but incorporated into the new Swift is Thermionic Culture’s Air control. This control is reminiscent (although not a copy) of the 16kHz boost control found on the Pultec EQP-1A. The Swift’s Air control begins to lift high frequencies at 7kHz, reaching a supersonic 30kHz at maximum boost; 11kHz is boosted by 5dB at full pelt.

Finally, in terms of tone control, the Swift features a 12dB/octave High Pass Filter that reduces low-frequency information by 6dB at 12, 24, 48 or 68Hz. Additionally, the final HPF setting is a 6dB/octave from 2kHz that levels out at 400Hz, before operating as another 6dB/octave filter below 48Hz. This setting can produce useful results when used in conjunction with Bass Lift to mimic the famous Pultec ‘low end trick’ of simultaneously boosting and cutting low frequencies.

Other front-panel controls comprise Gain switches, to adjust the output gain of the unit between -4.5dB and +3dB (with a further 6dB cut available on an adjacent toggle switch; hardwire Bypass, which completely bypasses The Swift’s electronics; plus the unit’s power switch, which illuminates a green LED when powered up. On the back panel, connectors are provided for balanced (floating) inputs and unbalanced output XLRs. Sowter transformer-balanced outputs are available as an optional extra. Internally, two double-triode valves per channel are employed; these are NOS (New Old Stock/vintage) GE 5965 and brand new JJ ECC802S types.

Straight out of the box, I powered up The Swift and let it warm up for 30 minutes. The unit is beautifully laid out in the classic Thermionic Culture style, and I couldn’t help thinking how handsome it would look in the rack below our similarly proportioned Phoenix compressor, still performing superbly after almost 20 years.

Once on-song, I strapped one channel across a lead vocal track, keen to hear the effect of the Presence and Air controls in particular. The Presence control on my TC Freebird has long been a secret weapon in my arsenal when processing lead vocals and I was pleased to hear that The Swift performed the same magic I’ve come to know and love; it allows the vocal to pop out of a mix without sounding unbalanced.

Dialling in some Air worked wonders, opening out the sound and creating a halo atmosphere. It was interesting to compare the Air control with the 12kHz treble boost. While the high treble boost added noticeable top-end sparkle, the Air control worked its magic by creating a sense of space that didn’t present itself as an obvious top-end lift.

Turning my attention to the low-end, I tried the Pultec-inspired trick of simultaneously boosting and cutting the low end, making use of the High Pass Filter and Bass Lift controls. Boosting at 50Hz with the HPF at its final setting gave bass guitar a nice touch of low-end heft, while effectively removing a little upper bass and low-mid muddle.

Throughout the reviewing period, I employed The Swift on all manner of voices and instruments, finding the chosen frequency centre points and Q settings for the Mid controls to be useful in a musically pleasing way. While I understand that some engineers feel that using the right microphone in the correct position should negate the need for EQ, I find that quality equalisation is an extremely powerful tool for creating modern pop productions.

Maybe too many poor EQ sections on budget desks have made engineers wary of boosting frequencies, leading to that tired old cliché that if you must use EQ, it’s better to cut than boost. Not so with The Swift – you can pile on the enhancement, safe in the knowledge that you will not EQ the life out of your tones.

I mentioned earlier that, for the last five years, Thermionic Culture’s discontinued Freebird has been my favourite equaliser. Now, with the addition of more comprehensive midrange controls and the sublime Air control, The Swift ranks as the finest program equaliser I have ever heard. Sure, there are other units (parametric EQs, for instance) that are better suited to forensic tone-rescuing duties. However, for the musical enhancement of sounds that are not broken, The Swift is a first among equalisers. 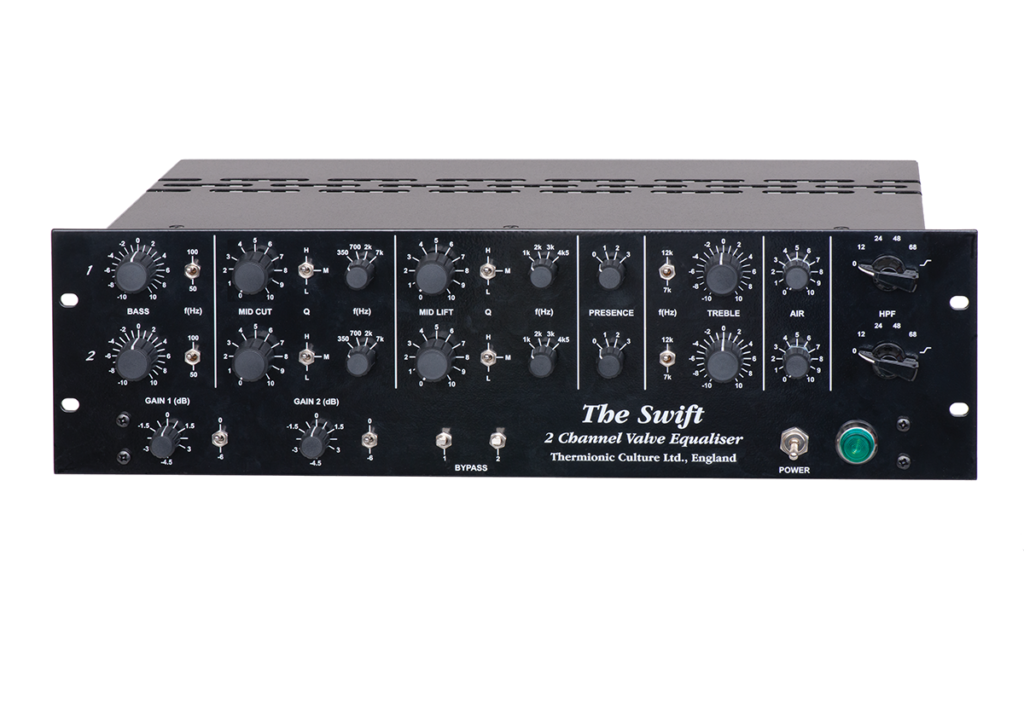 As well as sounding superb on individual sources, The Swift is excellent at shaping the sound of final mixes. A gentle 50Hz boost can add weight to thin-sounding tracks while the Air control sounds great on just about anything.

The Presence control can help the clarity and projection of lead vocals and instruments in a way that can’t be achieved by simply raising the level with the channel fader.

Thermionic Culture is in a class of its own when it comes to pure valve hardware hand-built in the UK. However, Warm Audio offers some excellent copies of classic equipment, mass produced to a budget. The EQP-WA (£649 each, £1,298 for a stereo pair) is a great version of the legendary mono Pultec EQP-1A, and WA’s take on the Teletronix LA-2A will be reviewed in these pages shortly. 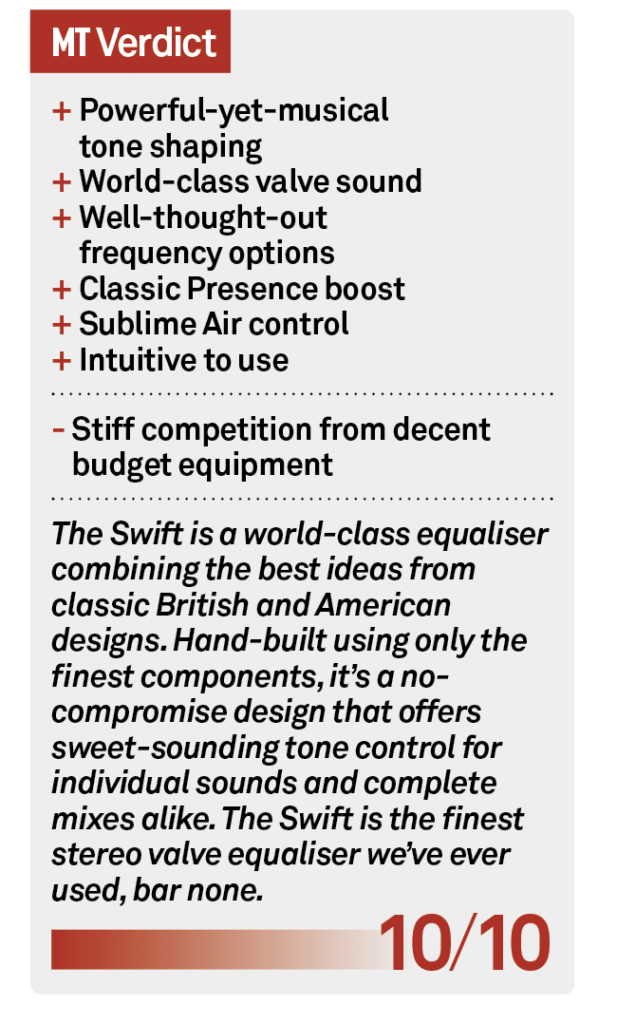