Sourced from a piano that stands no less than four metres high, The Giant proves that size does matter! Mark Cousins bigs it up. 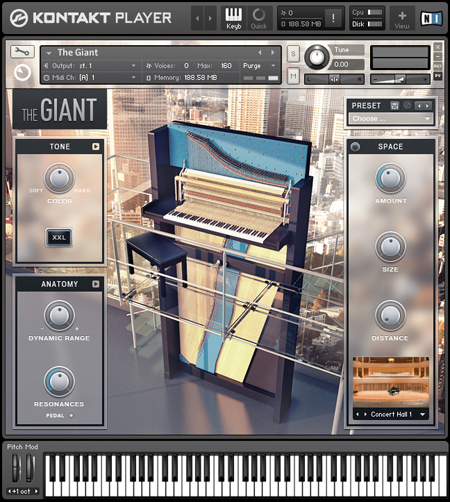 With so many piano libraries now available, it’s always interesting to see an instrument that marks itself out as being different from the competition – and NI’s latest release is unique in several ways. Firstly, the instrument is sampled from the highly unusual Klavins-Piano Model 370i – a four-metre-high, €260,000 upright that has its soundboard implanted directly into the wall of a room.

Secondly, the library also features a ‘Cinematic Effects’ instrument built from some rather radical sampling techniques and a unique convolution engine.

As you might expect, The Giant has been assembled to utilise all the latest advancements of Kontakt 5, and will work under the free Kontakt 5 Player. In total there’s almost 8GB of content, sampled by Galaxy Instruments’ Uli Baronowsky, which is compacted down to a 4GB install via Kontakt’s lossless sample compression.

The library is split into two principal Kontakt instruments – the ‘straight’ Giant piano and the Cinematic Effects version, each of which has its own collection of sub-presets accessed from the user interface.

The Giant’s GUI is a triumph of both power and simplicity, which is a rare quality to find in this day and age. On the uppermost level of the interface the controls are kept simple, changing the broad tone of the instrument, for example, or adding a splash of convolution reverb. Delve a little deeper, though, and you can really get your hands dirty with a range of detailed controls, from various overtones and sympathetic resonances to hammer and damper pedal noises. The Cinematic Effects instrument is slightly different from the main piano, being largely based on five sources (Overtones, Resonances, Release, Plucked and Noises FX) that you can select and layer at will.

Given the power of the editing features, it’s pleasing to see a number of presets that demonstrate the versatility of The Giant. On the conventional piano, the presets move between ‘dark and dirty’ settings that favour the softer, noisier sounds of the instrument, and the brighter, more upfront pop sound. The Cinematic Effects instrument is even more diverse, ranging from subtle ambient pads that make prominent use of the convolution engines through to aggressive scrapes and FX sounds that cut right through a mix. Thanks to the additional compression and EQ features and an intriguing XXL button that modifies the instrument’s transient properties, the piano sits well in a variety of mix scenarios.

While The Giant wouldn’t be our first choice for bread-and-butter piano sounds, there’s no denying that this is a beautifully sampled instrument that offers unique and musically useful sounds. What’s particularly interesting is the specific sound of the Klavins 370i – an upright piano in respect to its action, but with a soundboard length that equals, if not exceeds, that of a concert grand. As a result of the Klavins’ unique design, there’s a depth to the bass that you wouldn’t expect from a conventional upright, but also a percussive sharpness that a concert grand can never fully muster.

Other than the unique sound of the instrument itself, The Giant excels in the depth of control and flexibility it offers, which is a testament both to the detail applied in sampling the Klavins and the power and flexibility of Kontakt 5. It’s certainly an impressive combination, but there’s strong competition from other piano libraries (including NI’s own Alicia’s Keys), which demonstrates just how far the quality of sampled-based instruments has come in the last decade. Even so, nothing else offers the unique sound of the Klavins Model 370i, which, thanks to its height and stature, could easily class itself as the King of all upright pianos!

– Not an entirely conventional piano sound

An intriguing instrument that merges the percussive sound of an upright piano with the depth and gravity of a concert grand.