The Telefunken DD4 drum mic set bundles all the close mics necessary to record a kit. Mike Hillier steps into the drum booth… Details Price £1010 Contact Unity Audio 01799 520786 Web www.telefunken.com Amazon.co.uk Widgets Mic’ing up a drum kit is never an easy task. There are countless methods, and variations on each of these […] 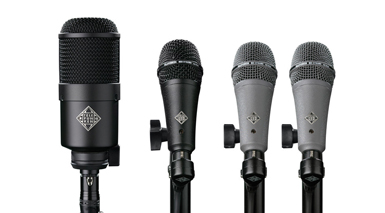 The Telefunken DD4 drum mic set bundles all the close mics necessary to record a kit. Mike Hillier steps into the drum booth… 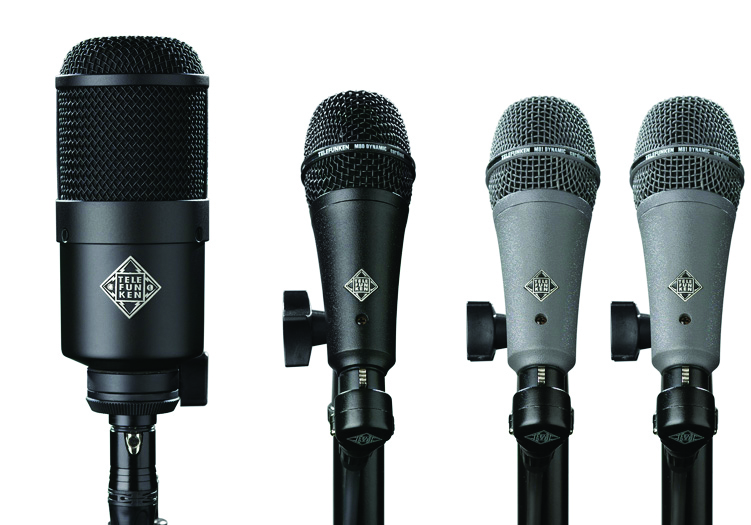 Mic’ing up a drum kit is never an easy task. There are countless methods, and variations on each of these methods. But despite this, many engineers will resort to the same basic setup, especially when it comes to the close mics, leaving the experimentation to the overheads. For many engineers, a Shure SM57 on snare, Sennheiser MD421 on toms and AKG d112 on kick is all they’ve ever even tried.

However, much is to be gained by leaving this strategy behind. You only have to substitute one or two of these mics for a quality alternative and you’ll be on the way to creating your own unique recording signature. 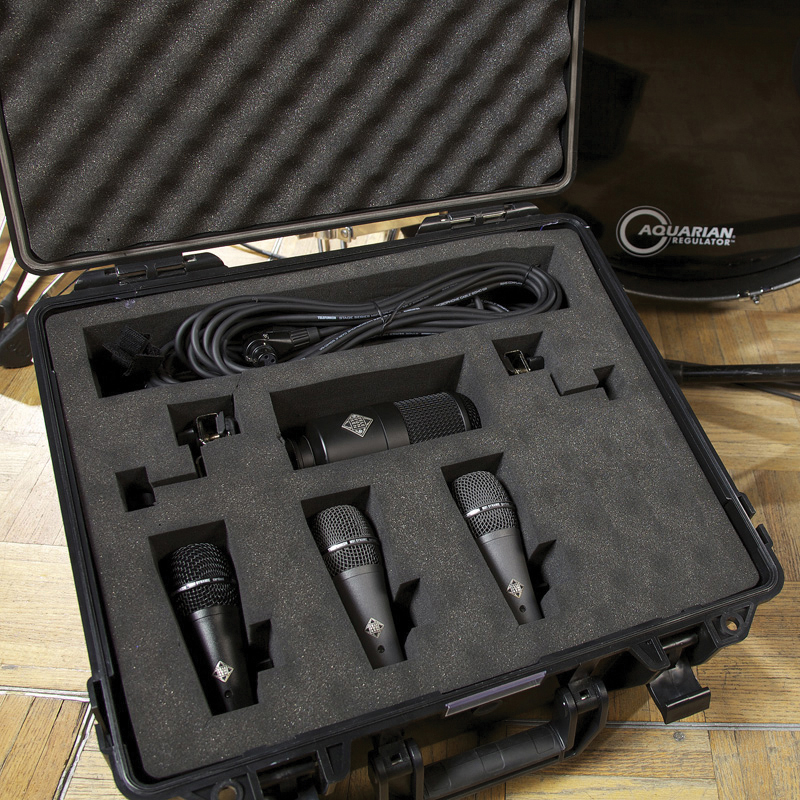 The mics come packaged in a nifty bomb-proof flightcase

Telefunken has a strong calibre when it comes to microphones, and is best known for its high-quality condenser microphones. However, the DD4 collection doesn’t contain a single condenser, and is instead made up of four dynamic microphones tuned specifically for drums.

What’s in the Box?
The four microphones in the DD4 kit are the M80-SHB – a shortened version of the Telefunken M80 handheld dynamic for use principally on snare; a pair of M81-SHs – this time based on the M81 handheld dynamic and principally for use on toms; and finally an M82 for kick drum.

The M82 has two switches which engage preset EQ settings. The first of these is the Kick EQ, which engages a filter to reduce the amount of low-mid energy, centred around 350Hz. The second switch is a High Boost, which adds a high-end shelf starting at 2kHz, lifting around 6dB at 10kHz.

The mics come in a large hard-shell flightcase, which also holds all the cables and mounting devices. A five-mic kit, the DD5 – containing three M81-SH mics – is also available for mic’ing kits with three toms.

In fact the DD4 flightcase comes ready with a fifth space for an additional MH81-SH, should you wish to add it in future. Alternatively, you could always place an additional mic in this space – perhaps a spare SM57 for under the snare. 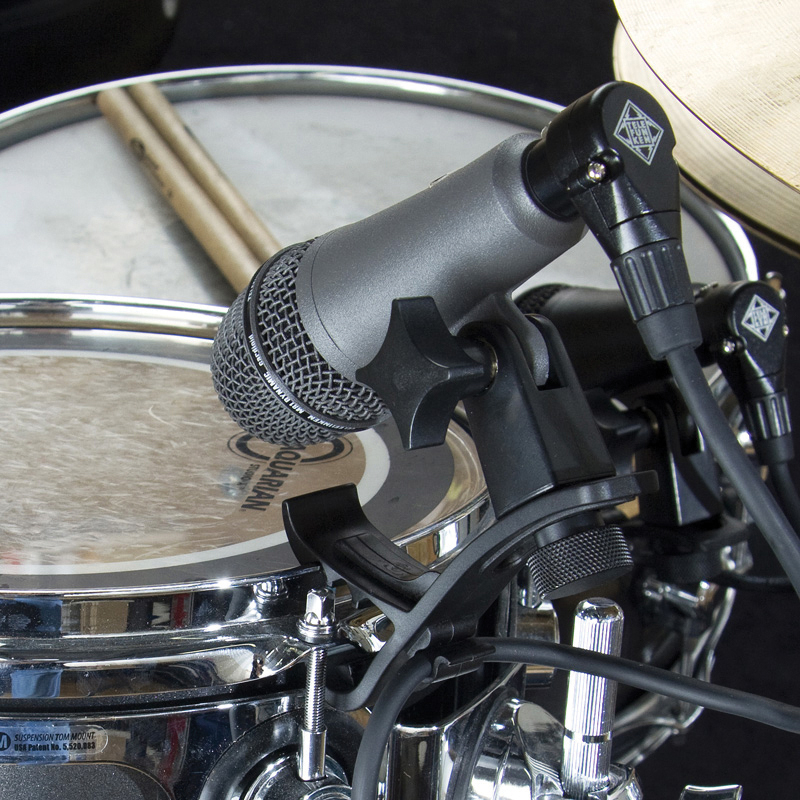 Hitting the Skins
For testing we set up the DD4 set on our kit, along with a pair of Neumann KM184s as overheads, and Røde NT1A as room mics. Alongside this, we also included a Shure SM57 under the snare, a Heil PR20 next to the M80-SHB on the snare top, and Sennheiser MD421s next to each M81-SH on the two toms. However, there wasn’t room in the kick to place both the M82 and an AKG d112 through the hole on the front skin and have either in an optimal position. So we chose to use just the M82 here. 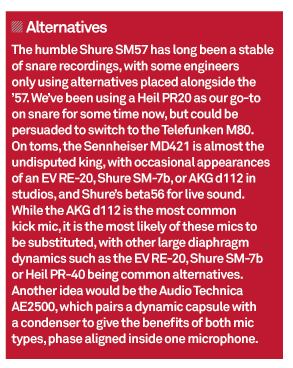 The plastic drum clips made fitting the snare and tom mics incredibly simple, and for live use they’d be fantastic, but in the studio we’re used to surrounding the kit with stands, and prefer the nuanced positioning, and physical separation from the kit that comes from using stands. The right-angled XLR on the cables that come with the kit helped to keep everything tidy and out of the way, and had us wondering if we ought to have a pile of right-angled XLRs for this purpose in the studio all the time.

The M80-SHB on snare had a pleasing snap to it, with good rejection from the hi-hat. It compared well against the Heil PR-20. The M80-SHB wasn’t as weighty in the bottom end as the Heil, which has a more pronounced proximity effect, but had a more open top-end.

Yet despite this, it had less bleed from both the kick and hi-hat, indicating a tighter, more focused cardioid pickup pattern. Blended with the overheads the M80-SHB needed very little EQ, adding a good amount of thud and crack to the snare without much mud, although we ended up bringing the fundamental up a little to give the snare a little more weight. 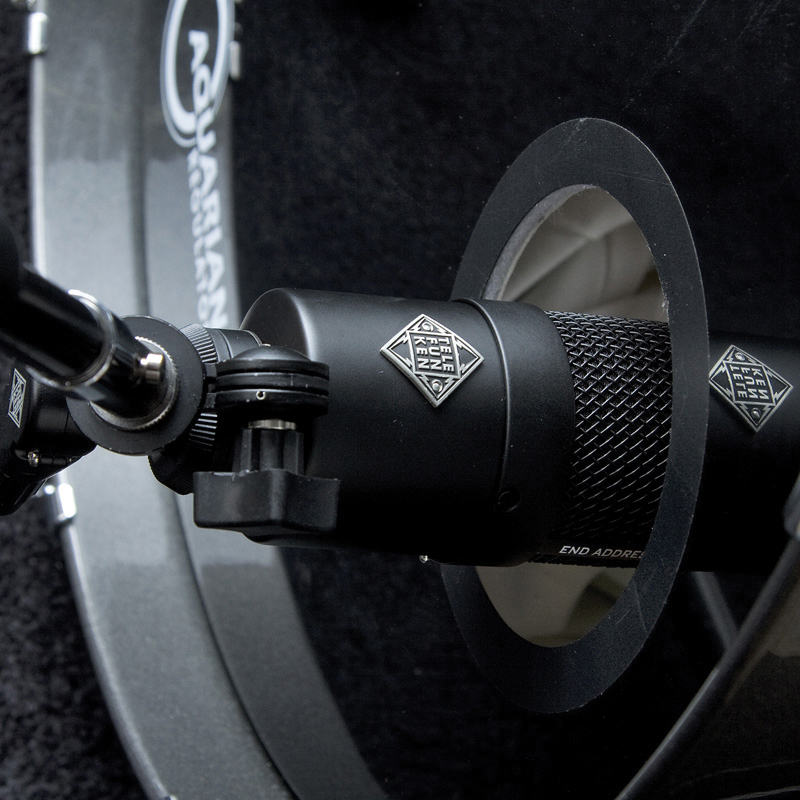 On toms the M81-SH had more stick attack but again less bottom-end weight when compared with the Sennheiser MD421. Telefunken has developed these mics to have a minimal proximity effect, but this is not always to their benefit – something we have come to use to our advantage to get extra power and strength out of our drum recordings. The overall tone of the M81-SH is clear and neutral, and the definition around the stick attack would make this an ideal mic in pretty much any circumstance.

Turning our attention to the kick, the M82 stood out as something a little special. Leaving both of the EQ switches off, we were able to get a full, fat-sounding kick, with a good combination of beater attack and shell resonance, which would give us plenty of options in the mix. Once we’d engaged the Kick EQ, we got something a little more modern-sounding, but not as hyped as the Audix D6. The mids are leaner, but there is still plenty of low end punch, and the highs remained clear.

Once we added in the High Boost, we got that modern metal kick drum sound – almost more beater attack than kick, but still with the sensation of weight attached to it. This makes for a very versatile mic, but most importantly, you can still capture a clean, unadulterated signal should you wish.

More than Capable
The DD4 is a collection of great mics, but it is by no means a complete drum mic kit in a box. You will still need at the very least a pair of overheads, and probably room mics, close mics for the hat and ride, and even additional mics for under the snare, and outside the kick. Although, for live sound reinforcement you could get away with just these mics, depending on the size of the venue, but for larger venues, you’re still going to want to add at least one overhead.

Of course, while packaged as a kit for drum recording, these microphones could also be used very capably for all manner of other recordings: from vocals, to guitar or bass cabinets. Whatever the state of your mic cabinet, though, the mics in this bundle are sure to add some new options. And should you not have the budget for the whole thing, each mic is also available individually. 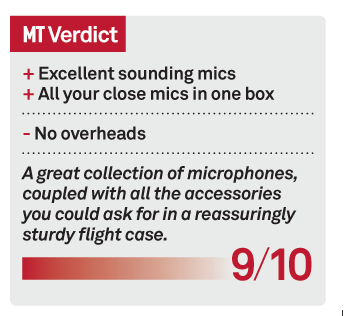