Tascam US-1×2 & iXR Review – The Best Budget Interfaces Around?

Tascam’s latest interfaces offer sleek iOS connectivity and a quality unit for under £130. Andy Jones asks if these are the best budget interfaces around… 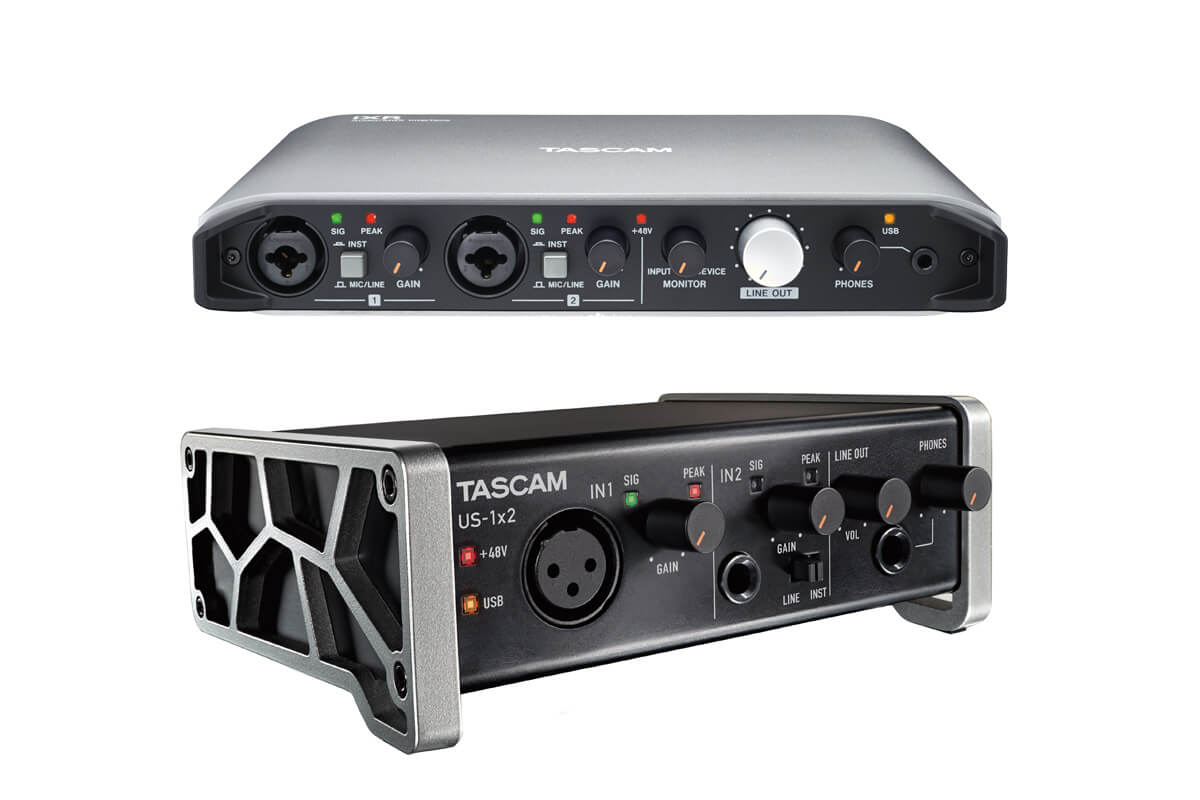 If only I’d been starting out in music production today. Thirty years ago it would have cost four figures – in dollars, euros, pounds or whatever – to get up and running with a set-up that could record music. Now it’s comfortably three figures and I’m not even adjusting those particular sums for inflation.

Recently in MusicTech we’ve looked at all-in-one starter packs from PreSonus and Audio-Technica/Audient that offer a stunning amount of power for peanuts. In the AT2035 Studio bundle, for example, you get an Audio-Technica mic, headphones, Audient interface, leads and Cubase LE for less than £300! Like I say, if only…

However, Tascam seems intent on capturing the budget crown – certainly on the interfacing side of things – with its US-1×2, an interface that currently streets at just £84! For good measure we’re also looking at the company’s iXR which not only handles your iOS connectivity needs, but weighs in at a street price of just £124. That’s a shade over £200 to have your interfacing for both your studio and mobile set-ups sorted! 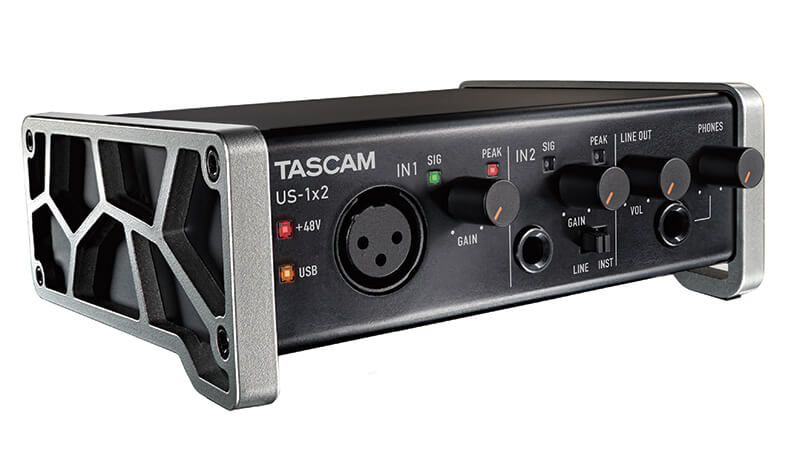 Looking at the US-1×2 first and this is the entry level interface in the US range, a point previously occupied by the US-2×2. The US-1×2 records at up to 24-bit/96kHz resolution and is USB 2.0 bus powered, so no extra PSU is required. It boasts low latency and a fair amount of connectivity for the price.

Around the back you get stereo line inputs to connect other audio gear (CD etc) and a switch to select front or back as only one of the input types can be used at any one time. Output-wise you get RCA jacks for connection to powered monitors and a headphone out around the front, with separate rotaries to control each of the volume levels.

The interface features Tascam’s Ultra-HDDA (High Definition Discrete Architecture) mic preamp which has low noise specs and a gain range of 57dB making it ‘ideal for any type of mic – dynamic, condenser, or ribbon’.

The US-1×2 certainly feels like a sturdy interface and two ‘Bio-Cell Side Panels’ lift it above the norm by angling it upwards on your desktop. As if all of that wasn’t enough for your measly 84 quid, you also get a copy of Cubase LE thrown in too. Happy now? In use, I had the US-1×2 up and running very quickly on a Mac in Logic, and after a quick adjustment of the Recording Delay option in Audio Preferences I was running pretty much latency-free.

The sound is clear, sharp and low in noise, just as promised, and I have to say I was very impressed with both the speed at which I was up and running and the results. I was quickly laying down ideas from a Yamaha reface CP digital piano over some old electronic meanderings and both playing and recording latency-free – or as close to it as you’d need. For the money you’re laying out, then, this is a very good device. Sure, there are limitations in connectivity, but it’ll easily get you up and running and that, in itself, is useful.

While the US-1×2 will do mobile interfacing via an optional Lightning connector the iXR is an out-and-out mobile interface with direct iOS connectivity, a flat design and light in weight so you can easily slot it into a backpack. Nice.

Again, it’s a 24-bit/96kHz audio interface but this time you get dual combo/XLR inputs with two Ultra-HDDA mic pres, both switchable between mic and line level and, again, you get a +48v option around the back. The iXR is also a MIDI interface so you get a MIDI In and Out around the back too, plus balanced stereo outputs for your speakers.

It’s fair to say, as you might expect, that the results were pretty much identical in terms of recorded sound and latency. And the overall sound of the device as a playback unit was also similar to the US-1×2. It’s not up there with the UA Arrow I replaced them with – the sound is not as full and wide – but as that unit costs around five times the price then I’m certainly not complaining.

So far, then, I’ve put both units through the same tests as desktop interfaces and they’ve both delivered impressively clean and solid results. As a desktop unit the iXR also has the extra input but costs another £40. But, of course, it also has that direct iOS connectivity up its sleeve so the target market for it is slightly different to that of the US-1×2, so my second test is to look at that aspect.

You’ll have to download the Tascam Setting Panel for Audio Interface app (free from the Apple Store), and then possibly update the firmware for the iXR to v1.02 (well, I had to anyway). Then you can use the unit to record which I did into Cubasis with excellent results – clean and in time.

I was also able to record my iOS synths directly into Logic as well, so in no time at all, my meandering electronic track had been transformed with some electric piano recorded with the iXR as a desktop interface and then some nice pads added by the iOS Magellan synth some 10 minutes later!

In between, I’d even managed to add the said electric piano to an old Cubasasis song. You don’t often get that kind of flexibility for just a couple of hundred quid!

With the US-1×2, Tascam has really packed a lot into a very small unit and for such a small price that it’s hard not to recommend it that alone. It’s also ruggedly-built, sounds good and does the job required, simple as that. If funds are limited then this could be the audio interface for you. 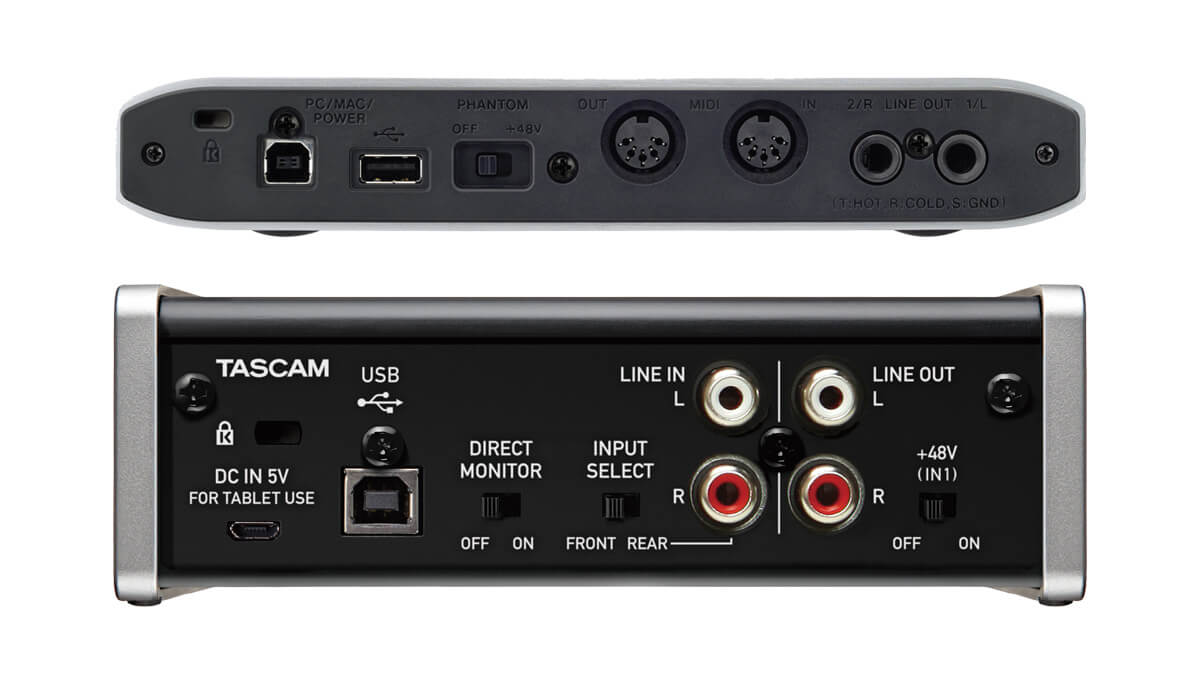 It’s also easy to get up and running and does deliver the promises made in terms of low noise and latency. Indeed my only negative – and it’s not really a negative for Tascam – is that its slightly older, more connected relation, the US-2×2 costs just £20 more out on the street and would be worth that extra outlay to my mind.

The iXR, however, is something of a revelation. Here you have a unit that costs just £124 and delivers great results both as a desktop interface and – once you’ve updated everything and downloaded the app – as a fantastic iOS interface too. Honestly, this is just a ridiculously small amount of money for what you get.

You might get better quality playback on (much) more expensive interfaces, but I can’t think of anything that, once set up, will jump across your iOS and desktop interfacing worlds with such glee. Its speed at turning to whatever you want it to is almost inspiring in itself.

Either way, for both of these interfaces we’re talking very decent quality for very little money. I’d recommend both for new producers on a budget and those who needs a quick connection, but the iXR especially for anyone who wants all that flexibility. Someone get me a time machine, now. 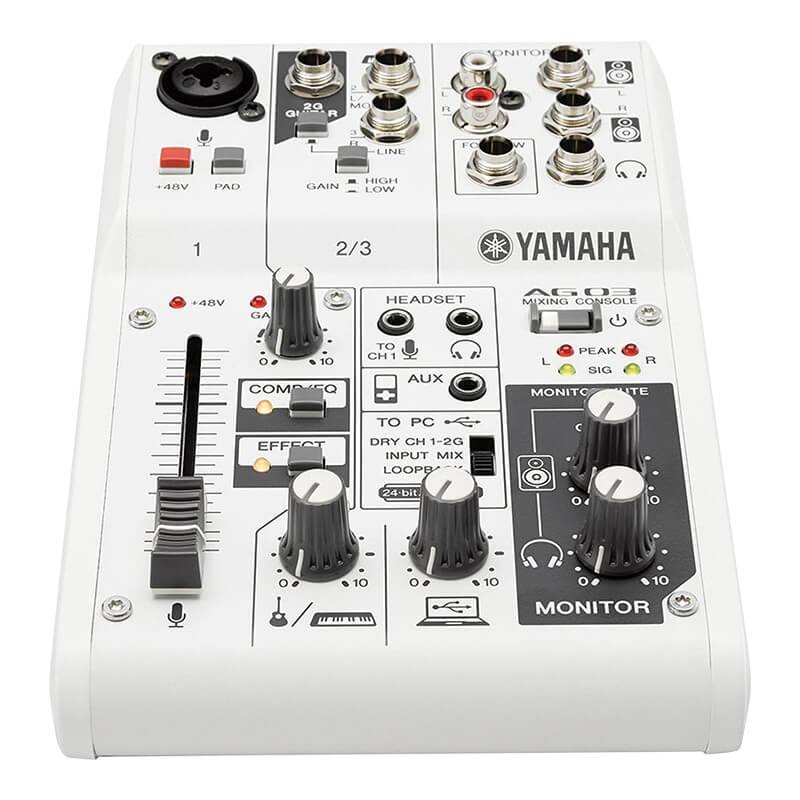 As an alternative to the Tascam US-1×2 I’m choosing this little Yamaha as it’s a USB mixer with more inputs and has some extra tweakage via faders. Yes it costs a little more but only around £20 extra street price. 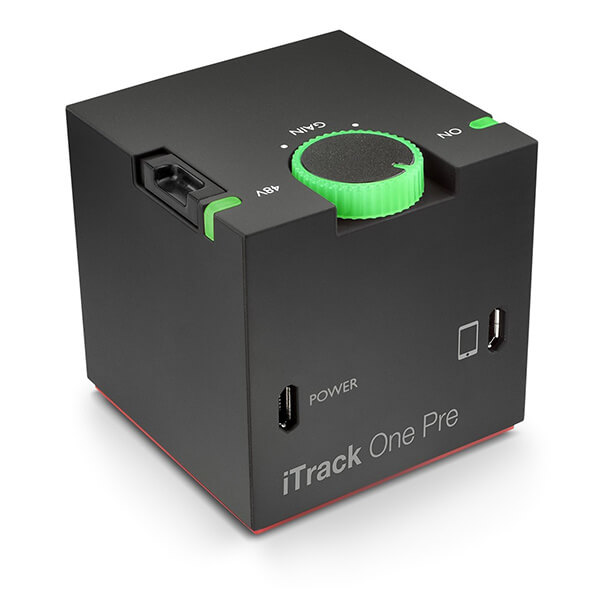 This small block-type interface from Focusrite is one of the best iOS interfaces out there in terms of simplicity, plug ‘n’ play power and audio quality – as it should be with Focusrite’s pedigree. We’ve seen it for as little as £49 so grab it!