The new Tannoy Reveal series comprises active monitors of varying size and power levels that can be used as studio workhorses or convenient computer speakers. Huw Price tests the 402 and 802… Amazon.co.uk Widgets Details Price 402: £99 each, 802: £189 each Contact TC Group 0800 917 8926 Web www.tannoy.com It’s not often that the […] 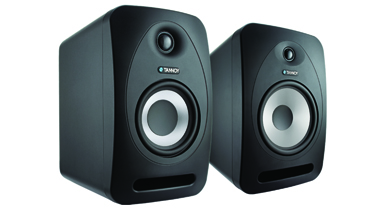 The new Tannoy Reveal series comprises active monitors of varying size and power levels that can be used as studio workhorses or convenient computer speakers. Huw Price tests the 402 and 802… 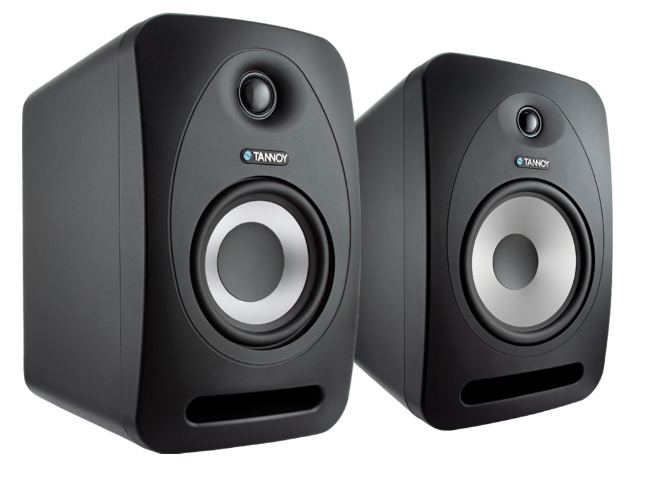 It’s not often that the first thing that catches our eye when reviewing a new set of monitors is a relatively minor feature. But with the new Tannoy Reveals the woofers are not only described as being ‘custom high-efficiency’, but they are also ‘poke resistant’. Not something that’s usually a concern of ours, if we’re honest.

The idea is that if a blunt object accidentally presses into them they will spring back rather than remain caved in. We managed to resist the urge to test this feature until we had completed our listening tests, but we can report that they function as described.

Speak Up
Although designed to be used as studio monitors, the Reveals do have some features more commonly associated with computer speakers. Besides the balanced XLR and unbalanced jack inputs, there’s a stereo mini jack input for mobile devices. There’s also a monitor link socket and a 16ft cable to join one speaker to the other with a position switch to determine which is left and right.

Equalisation adjustment is restricted to a three-way switch with Hi Boost/Neutral/Hi Cut settings. The 402 has 50W of bi-amp power distributed evenly between the drive units. The 802 has 100W, with 75W going to the woofer and 25W to the tweeter. The 802’s crossover frequency is 1.8kHz rather than 2.8kHz and both monitors have indented volume controls.

You know things are getting a bit silly when you can get speakers as good as the 402s for so little money. Sure you can pick them up on some deficiencies here and there if you want to be hyper critical, but the frequency balance, imaging and clarity of them create a very good overall impression.

The bass remains solid and even down to 50Hz or so, below which there’s a fairly rapid roll-off. You may notice a peak around the 120Hz mark, but it’s pretty much in line with what you would expect from small, low-budget near-fields with front ports. We had expected some wind noise too, but to Tannoy’s credit they have managed to engineer out any port chuffing.

The treble sounds smooth and un-hyped, so we experienced no sense of fatigue while working with the 402s. With everything set flat the midrange did sound just slightly too fat and fulsome in our semi-damped listening room, so we decided to try the treble boost and preferred the result because the midrange sounded clearer and the solidity of the stereo imaging improved.

The only downside worth mentioning is a slight sluggishness to the bass. Given the diminutive cabinet size it’s certainly deep and powerful enough, but the upper midrange hump does seem to slow things down, and very low basslines don’t track quite as well as they might. Then again, we’re comparing the 402’s performance with speakers costing two or three times more.

Big Brother
The most obvious differences between the 402 and the 802 are loads more volume and loads more bass. Other than that, there’s no mistaking the fact that these speakers come from the same series. Once again we have an upper bass hump around 120Hz, although it’s slightly less noticeable because the 802’s hump is spread over a wider frequency range.

Deeper bass goes along with the larger cabinet. The roll-off starts around 50Hz, or just below, but the slope is far more gradual and the 802s continue to push air down to around 35Hz. These speakers will effortlessly fill a small-to-medium-sized room with sound, and the extra volume that they produce makes it easier to overlook the slightly vague stereo imaging.

These models represent a lot of speaker for the money. The 402 has ample power, great looks and impressive sound quality for its price point. The 802 also has much to recommend but it is considerably more expensive, and having a sonic character that is perhaps more entertaining than it is accurate may not suit everybody. 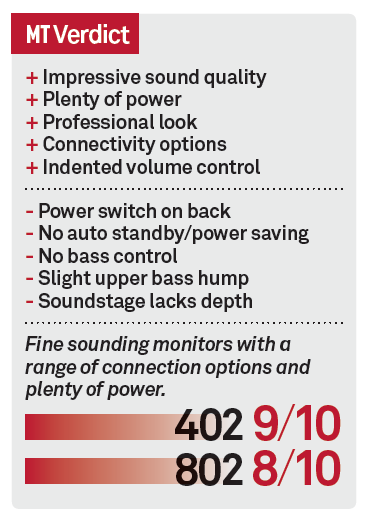