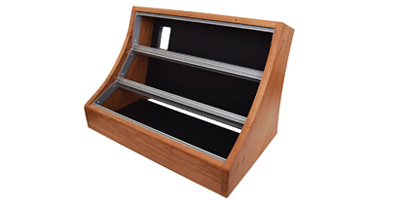 A new strand of a British company is now making Eurorack cabinets with a classic look that will tempt any synthesist. Dave Gale examines the casing… 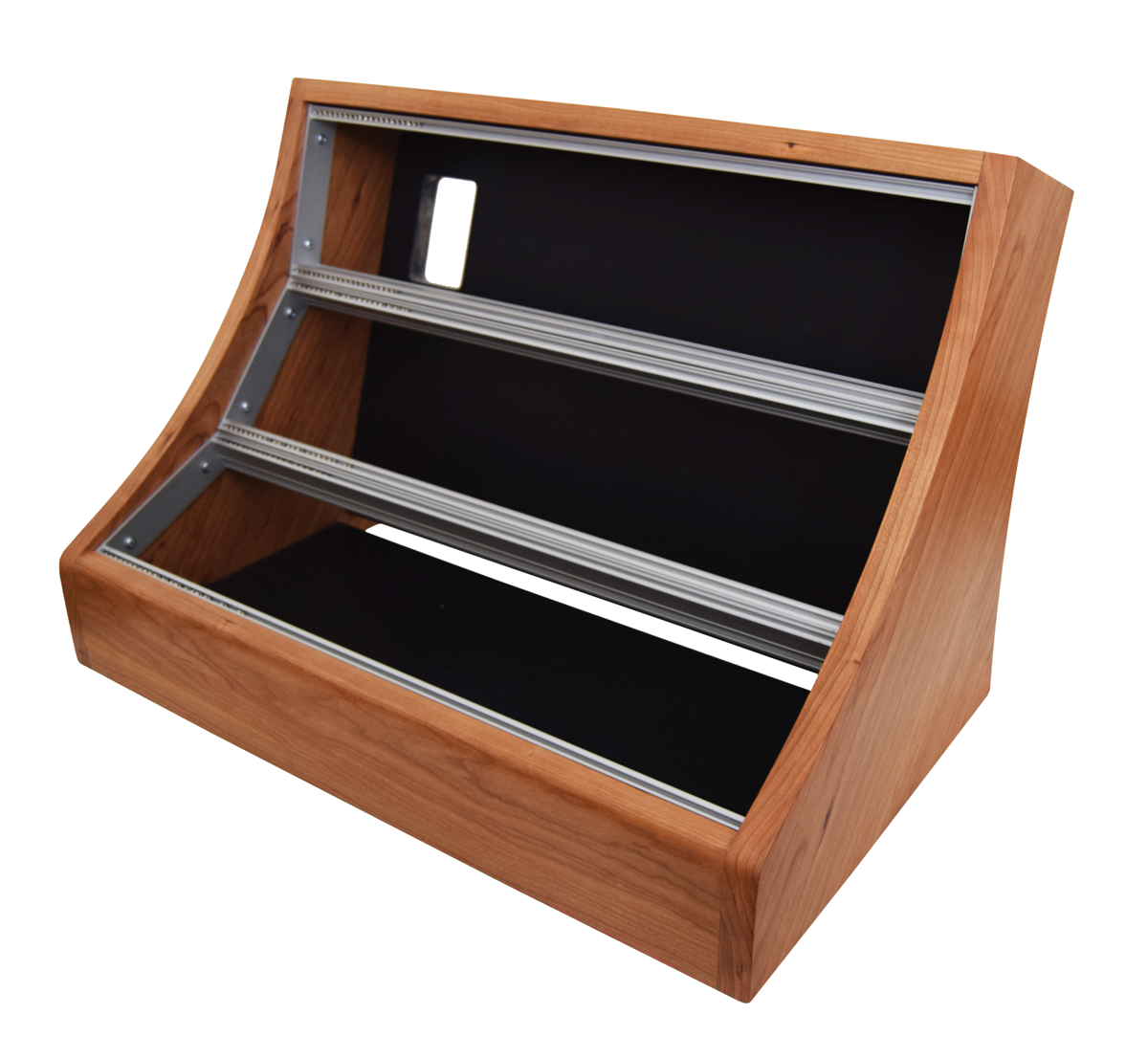 Some years ago, I became aware of a company called ‘Studioracks’, which had become highly established and respected for building all sorts of very fine rack systems for studios, as well as bespoke studio furniture.

So it came as no surprise to learn that the people behind this outfit had embarked on the next phase of its studio furniture journey, with the development of a new branch called ‘Synthracks’.

The Eurorack concept has pretty much established itself as the dominant modular format, and that is reflected in this first offering from Synthracks, in the shape of the ‘Peter’ cabinet enclosure.

Named in reverence to the many synth composers who share the same name, the ‘Peter’ is available in both 6u and 9u configurations (two or three rows), and a width of 104HP, making them perfectly compact, and suitable for placing on a small worktop, possibly next to a DAW-based setup, on a desk.

Unlike a ‘skiff’, these units have a sloping upright position, allowing a perfect user experience, as the modules face the user at a comfortable angle.

Perfect Peter
On removing the cabinet from its packaging, I was immediately struck by both the weight and build quality of the ‘Peter’. This is not some flimsy unit put together with Allen keys, rather a robust solid wood affair, with some nicely thought out touches.

Apart from the beautiful sweeping arc design, which is present on both of the side panels, the whole enclosure is lifted off the desktop by 5mm or so, allowing an exposed channel which runs the length of the rear of the unit, to act as an airflow vent. 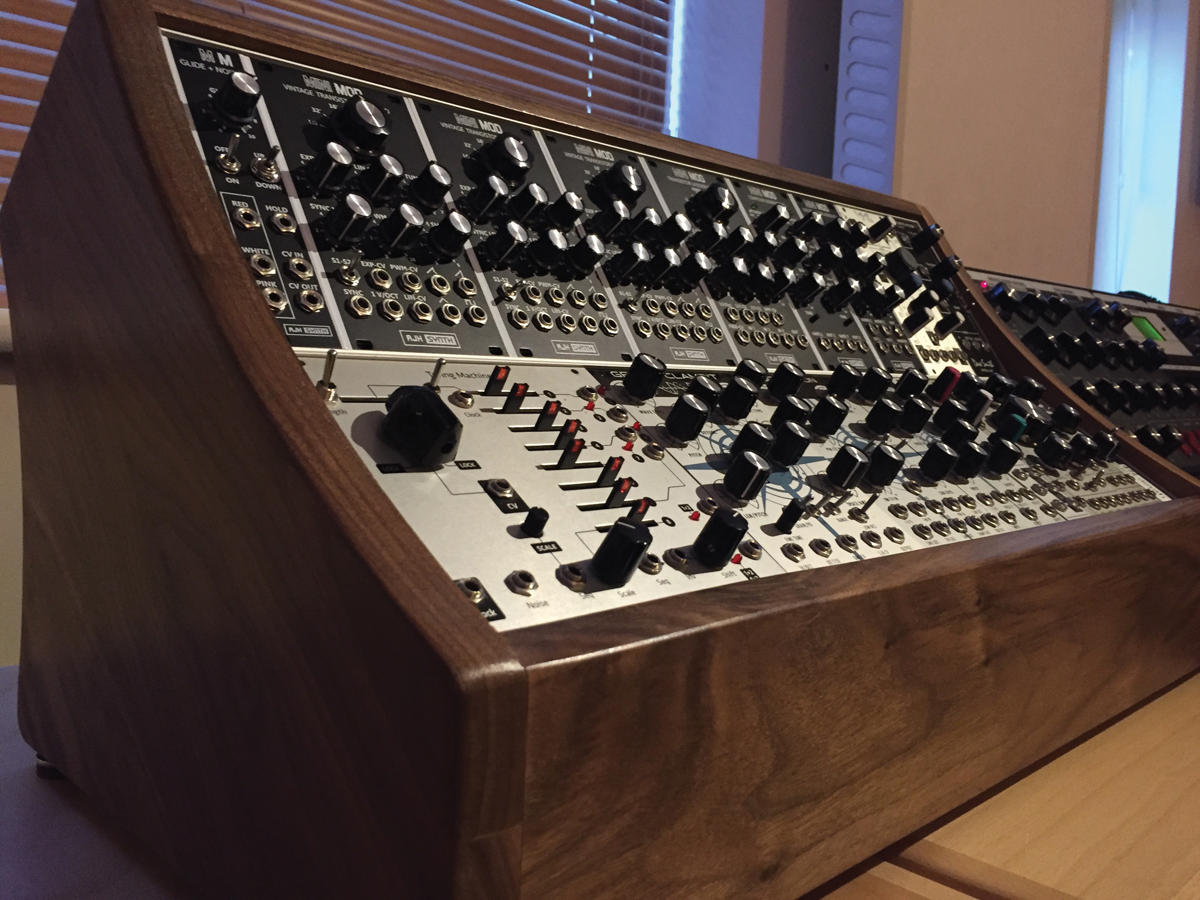 Populated with modules, the 6u Walnut version looks outstanding against the vintage black of the AJH Mini Mod

This works in combination with a small, two-component removable panel on the back of the unit. This panel allows access to the inner sanctum at the rear of the cabinet, not only for air convection but also to run the odd cable for a module that might take a DC power supply from the rear, such as the Roland System 1M.

The ‘Peter’ does not ship with any kind of power fitted; however, with the emergence and resulting popularity of the current range of DC-based power supplies, from companies such as Tiptop Audio and 4ms, it would be relatively easy and cheap to fit something suitable. There is plenty of room for bus boards along the rear and base of the enclosure, and thanks to the airflow and convection, your modules should always remain cool under pressure.

Spoilt for Choice
There are plenty of wood options, with the Oak, Walnut and Cherry solid wood finishes commanding the higher price bracket. However, if your are working on a budget, the appearance of the Black Lacquer finish not only looks very smart, but will also trim the price somewhat. This is down purely to the cost of the solid wood, so the build quality will be the same, regardless of the finish.

There is no doubt that the ‘Peter’ is in the middle to high-end price bracket, but for my money I don’t think you can beat the allure of a solid wood enclosure, which coupled with a striking design will make you smile every time you reach for the power button and start making a patch.

It’s ergonomic and crafted beautifully, hand-made in Wales by skilled craftspeople, and the first release in a line that looks set to become very popular throughout the Eurorack community. 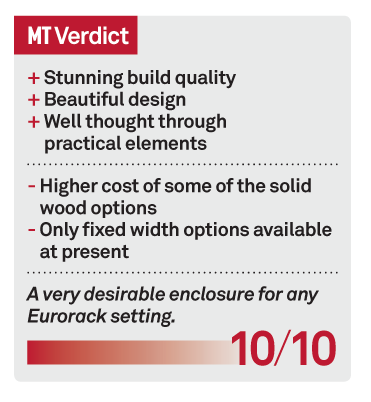