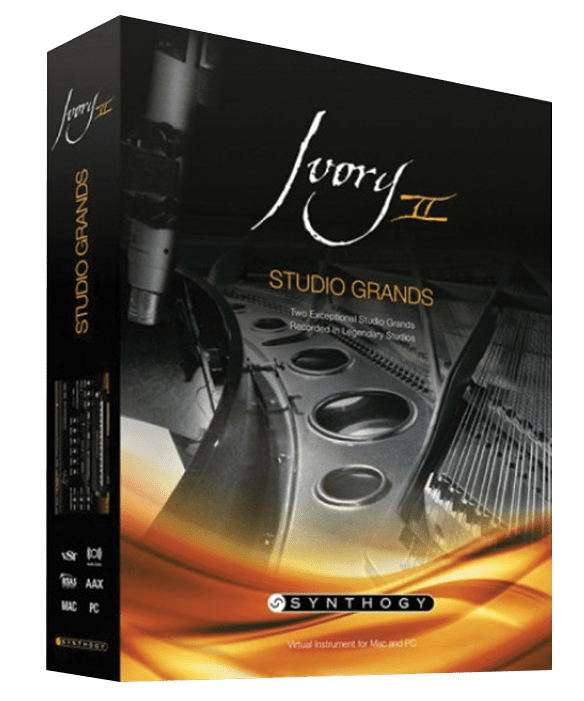 As we all know, virtual instruments are getting bigger, particularly those, such as Synthogy’s, which record every nuance of an incredible instrument so you can recreate it at a fraction of the original’s cost.

Sadly, Mac and PC developers don’t seem to be upping the base hard-drive specs of their machines as much as they once did, so as a music producer in the 21st century, a speedy external drive of some capacity is your new best friend. Or, since they’re tumbling in price, why not get a couple?

You’ll certainly require one with Studio Grands, the latest instrument offering in the Ivory II collection from Synthogy. The package weighs in at over 110GB, and that is for just two pianos. But what pianos… as we’ll come on to see and hear, and what meticulous recordings. And at just over 100 quid a piece, they might take up your hard-drive space, but at least they’ll leave you
a few quid to buy that drive.

Leaving aside the fact that a company called Synthogy is fast building a reputation for recreating great pianos, let’s take a quick look at the company’s Ivory II range in order to get a feel for where these two fit in.

Starting with Ivory II Grand Pianos, you get three recreations of some classic nine-footers designed for concert halls: a Bösendorfer 290 Imperial Grand, a German Steinway D (near-nine-foot) Concert Grand and a Yamaha C7 Grand. Upright Pianos offers a Yamaha U5, a 1914 A.M. Hume Vintage, a Honky Tonk Barroom and a Real Tack Piano.

The third in the series is Italian Grand and features the ‘world’s most sought after’ 10-foot Italian grand. Lastly, American Grand offers a 1951 New York Steinway D. 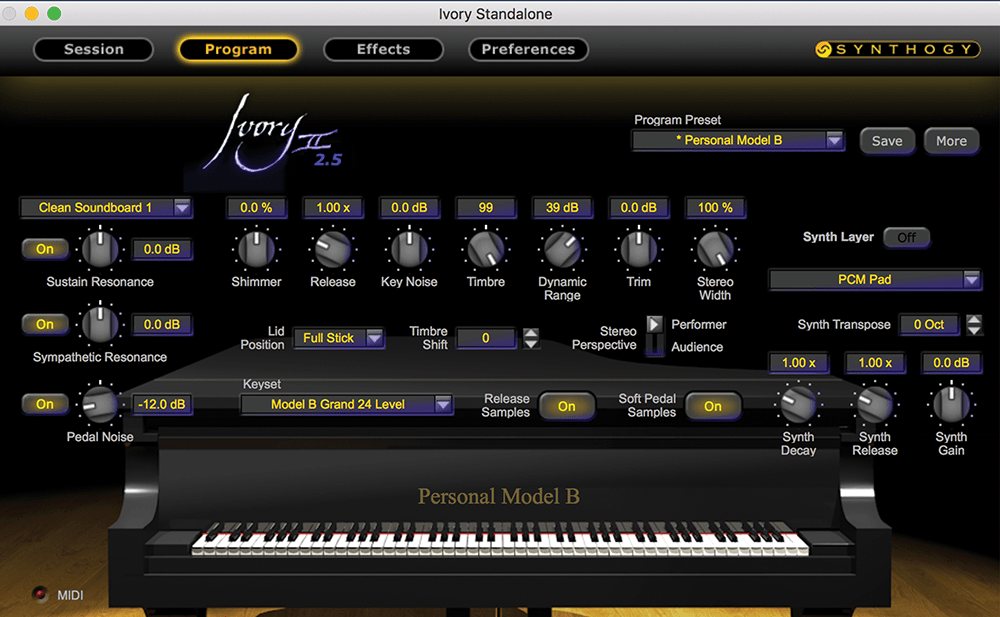 Studio Grands, then, is the fifth in the series and has a Steinway B Grand Piano recorded at Power Station Studios and a Bösendorfer 225 Grand Piano, recorded in California´s Firehouse Recording Studios.

These are smaller than your average Grand, at seven feet each, and designed for studio or smaller-hall playing, perhaps conservatory environments or fancy (very fancy) restaurants. They work well for live performances with ensembles, as they leave more sonic space for other instruments

I chose the download option, although I probably should have gone for the boxed USB drive version (for the same price as the download), given my rubbish home-internet connection. The download process allows you to pause or even quit, so closing your laptop lid by accident merely pauses the process, while re-opening should pick up your download at
the correct point.

If you’re wondering why these are such big instruments, you’ll understand after some stats. First up, there are 24 levels of velocity per note – that’s probably 30GB a pop right there – and recording of multiple levels of pedal release. There’s also ‘Harmonic Resonance Modeling For True Sympathetic String Vibration’ and pedal-noise enhancements, meaning that this collection should convey not just the notes but the instrument’s overall characteristics – resonances and all. There are standard effects – Ambience, Chorus and EQ – as well as ‘timbre shifting’, Parametric EQ and layering.

Studio Grands ship with the Synthogy’s 2.5 Piano Engine, so an iLok key is no longer required, making the iLok unlock process easier. Even so, you do have to have an iLok account (which is free) to register the product. You simply enter the serial number and it becomes one of your available iLok licenses at iLok.com. At first, I wasn’t getting any audio, so I ran the Ivory Library Tool to verify each of the downloaded files. This did the trick, but it did push me over the edge in terms of the total time taken to download, register and install. 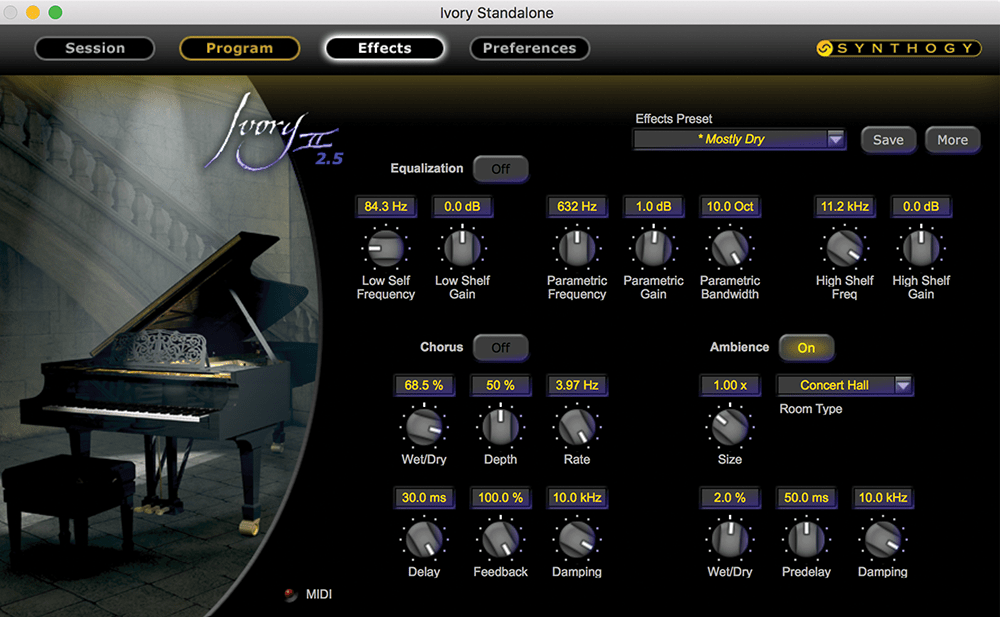 I’ve said it before, but when buying über-quality pianos you have to ask yourself: does your existing DAW offer a decent-enough equivalent? Most ship with one kind of piano or another, so if the piano isn’t your main instrument, or a background sound in your compositions, you probably don’t need a great one. But if it’s at the forefront, then you need a good one and these really are very good.

Worth your drive space

Once you’ve registered it, as I’ve said, you can use Studio Grand standalone or as a plug-in. Load times depend on your drive. Expect up to 10 seconds for a standard HD like mine, or a quoted three seconds for an SSD. Using the instrument is slick and intuitive, although the interface is a little small and I could have done with a size adjuster. There is a Full Screen Mode, but all this seems to do is enter a full screen with the same-sized GUI surrounded by black the actual area of interest remains unaltered which is odd.

There are 20 presets, each for the two pianos and a couple of bonus synth sounds, each of which can be layered with the piano. They seem a tad out of place next to the majestic pianos, but a bunch of envelope controls add flexibility. Indeed, there’s a lot you can do with every sound which I’ll come to.

Broadly speaking, the Bösendorfer sounds brighter than the more mellow Steinway, but both reproductions are astonishing. The first thing to note is the smooth velocity differences, with the sound changing dramatically as you strike keys with different strengths.

Presets can be subtly different from one another – and you’ll sometimes barely hear any differences – or can be wildly varied, with more effects added here or a touch of EQ there. And as I’ve hinted at, this is another key strength of Studio Grands: aside from the pristine recordings of the originals, it’s what you can do with them that takes this well beyond a simple (okay, not exactly that simple) piano instrument. 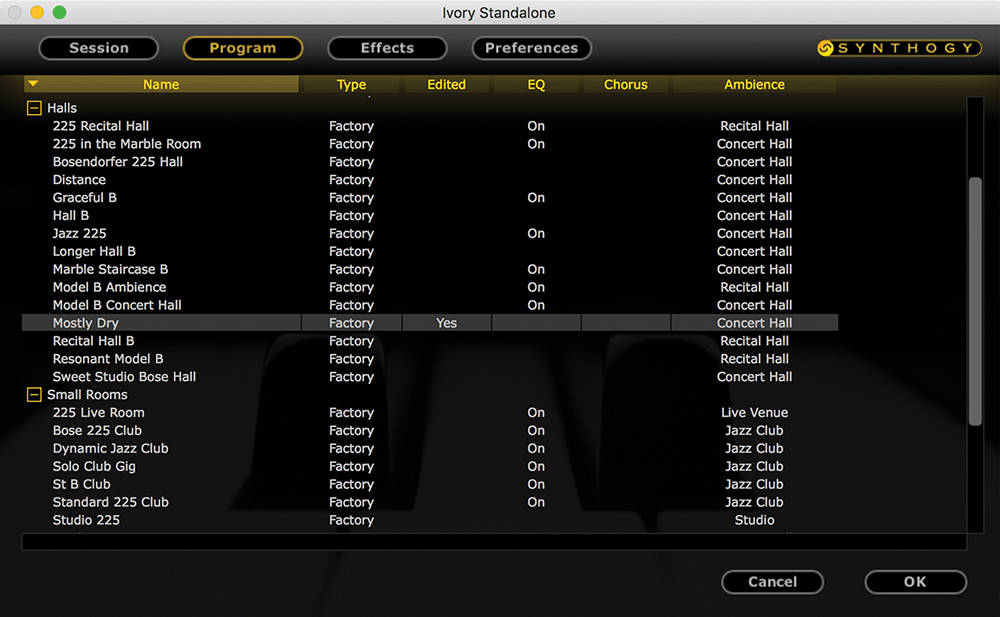 Effects are broken down into EQ, Chorus and Ambience, but within these, there are no less than 17 parameters to tweak and around 40 overall presets to choose from. Some of the effects you can achieve are incredible – the biggest, most dramatic hall reverbs and some quite bonkers Choruses almost give this the level of sonic variety as a full-blown piano-based synth. Maybe that’s why the company behind it is called Synthogy, after all…

The less in-your-face parameters are comparatively less subtle, but are great for more nuanced play back. I particularly like the Key Noise option that adjusts the noise made by the key hitting the key bed; Lid Position, which models the different tones as the lid opens and closes (which, to these ears, increased subtle reverb); and Shimmer and Release, both of which deliver more obvious ambience. There are a host of others, too – some are more subtle than others, but all of them point to an amazing attention to sonic detail. You’ll be hard pressed to get a better sounding or more flexible set of pianos.

The download and installation process was a faff, but what you (eventually) end up with are two exceptional pianos, both showcasing ultra-realistic sounds and a surprising amount of flexibility within the interface. Okay, you really should be happy with the sounds presented to you when you buy pianos of this quality, and you are probably not buying pianos like these only to apply an excessive amount of sonic editing to them, but it’s there if you need it and can be dramatic.

Ultimately, what you are definitely buying Studio Grands for is a set of great piano sounds and really, they don’t come much better than this. So, if you have a spare 100GB lying around in your drive and you need an incredible piano or two at what I consider a bit of a great price – a hundred quid each, for pianos that cost between £50 to £100k in the real world – then Studio Grands is a must-have. 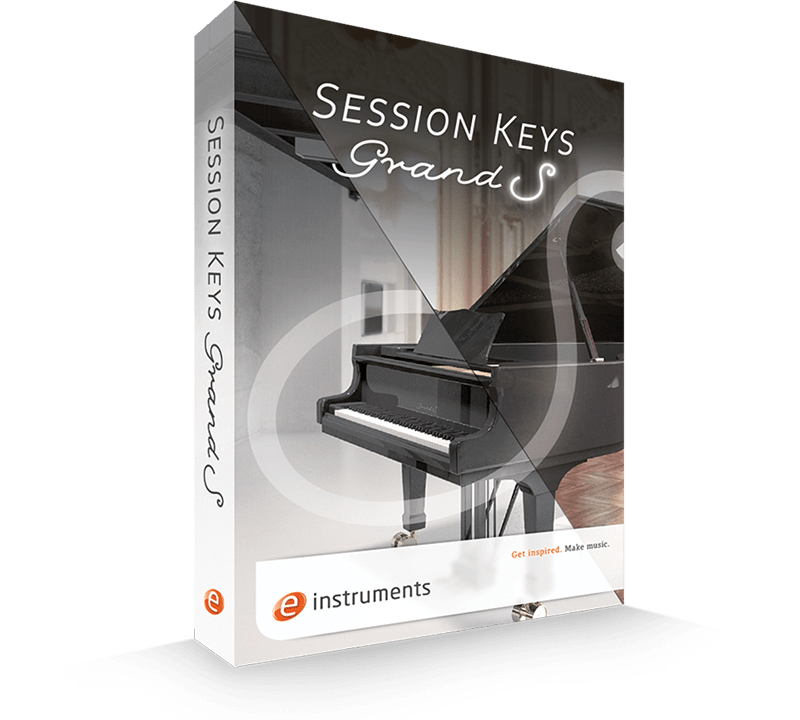 I most recently reviewed an e-instruments electric piano, but the company also does a grand-piano package, of which we said: “These are excellent and will help you to incorporate almost any kind of grand-piano sound you like into your tracks.”

Okay, it’s 11 times the price – but what you have here is a great keyboard, plus great sounds and access to the Nord library. “The ultimate piano, bar the real thing.nIt plays beautifully and sounds incredible, simple as that,” was our rather emphatic conclusion.