This microphone boasts a capsule based on that of the coveted AKG C12 – and it sounds as gorgeous as Warm Audio claims. 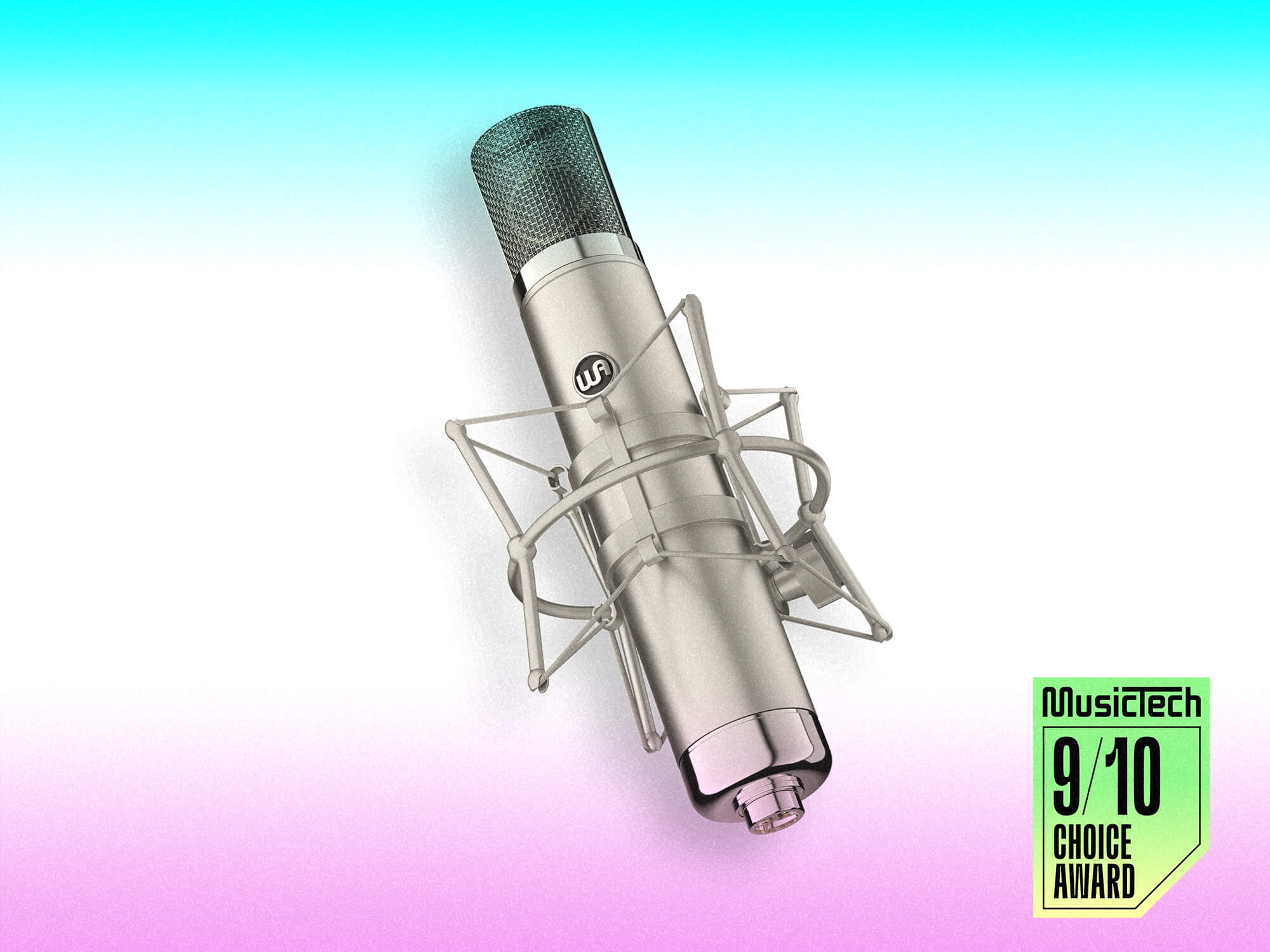 Texas-based classic pro-audio expert Warm Audio is a master at recreating vintage recording gear and, here, it turns its attention to the classic AKG C12 valve – or tube, if you prefer – microphone. In the company’s own words it’s “a faithful recreation of the most natural and balanced tube mic of all time,” and no less.

The WA-CX12 is based on the original production run of 2,500 units from 1953 up until 1963. An original working example would cost a small fortune today, though, and even if you could afford the outlay, good luck finding one. A large diaphragm condenser microphone, the CX12 is a versatile, multi-purpose microphone with nine selectable polar patterns, offering cardioid, omnidirectional, figure-eight and six additional intermediate patterns.

A 12AY7 valve is housed within the mic’s body and while thermionic devices are often said to add character to audio signals, they also produce heat. With that in mind, it’s wise to position the microphone upside down, hanging down from the supplied shockmount to prevent heat from rising up into the capsule, especially when powered up for lengthy periods of time.

The capsule itself is an edge-terminated, all brass WA-12-B-60V-CK12 style capsule, designed to faithfully emulate the response of the capsule found in the original AKG C12. Measured frequency response graphs show the CX12 to be ruler-flat from 30Hz up until 2kHz, where there is a slight dip before a gentle, broad treble-lift kicks in around 3kHz, before a steady high-frequency roll-off from 19kHz. This pleasing treble enhancement is most notable in cardioid mode; the figure-eight and, more obviously, omnidirectional modes exhibit a flatter response with less added sparkle and sheen.

Although a microphone costing £999 can’t be classed as cheap, it’s an extremely wallet-friendly price for a tube mic of this calibre and Warm Audio hasn’t skimped on high-quality internal components. Premium capacitors are used in the circuit and there are no solder masks on the PCB, which Warm Audio claims allows for the lowest possible noise floor while preventing crosstalk.

Encased in a beautifully finished nickel-plated brass body, the CX12 is stored in a sturdy wooden mic case and this, along with the external power supply, seven-pin cable, IEC mains lead and shockmount is housed in a lovely vintage-looking tweed carrying case. 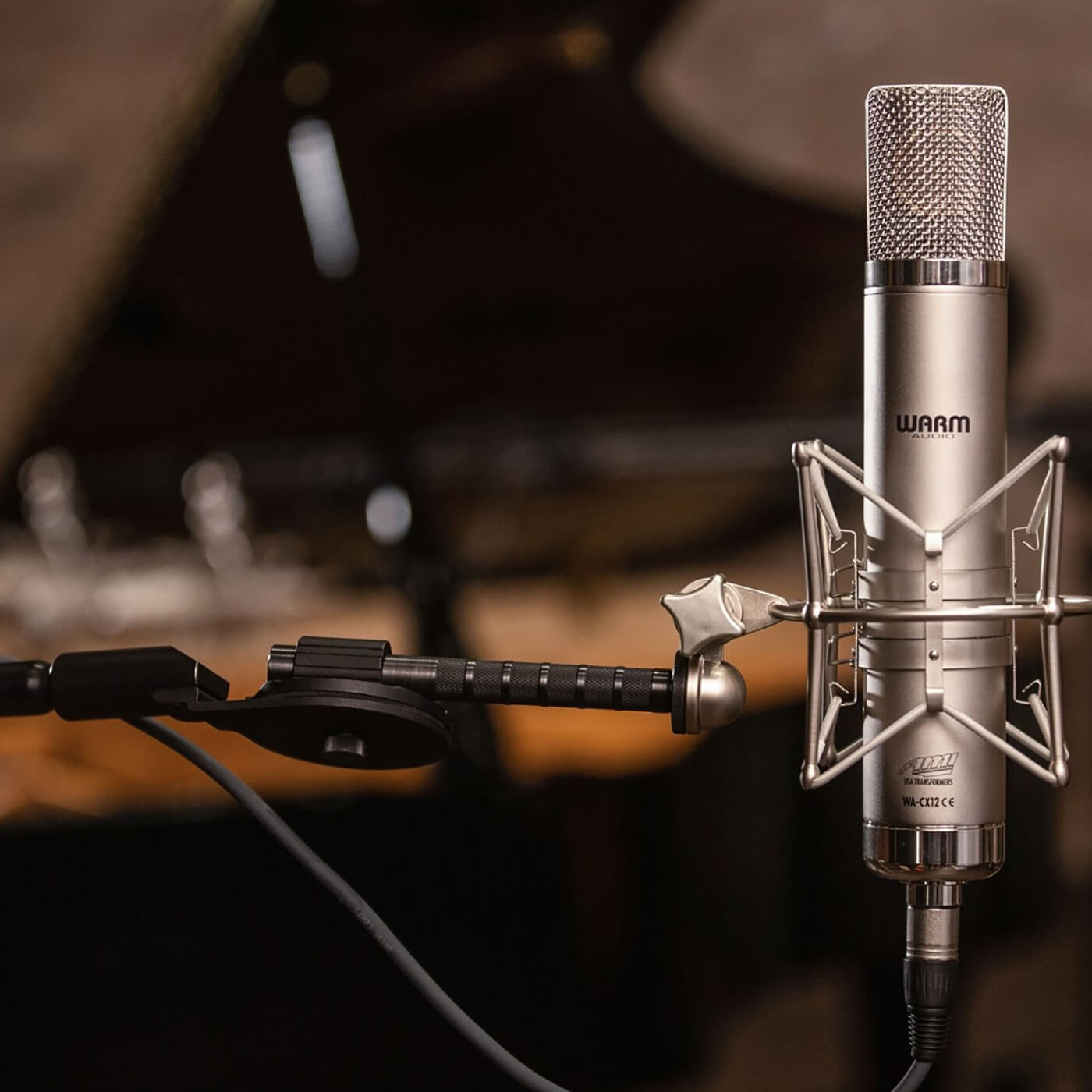 The CX12 is a gorgeous-sounding microphone. Its character is warm, rich and sweet, with excellent extension at both frequency extremes. Smooth and balanced throughout its range, the CX12 offers supreme clarity across the broad midrange, albeit with a slightly soft, laidback and relaxed presentation.

In a side-by-side comparison with our AKG C414 B-ULS and Neumann U 67, two heavyweight large diaphragm condenser mics that would be in the running for similar tasks as the CX12, the present microphone is creamier sounding with a slightly honeyed treble character. In contrast, the C414 has a woody-sounding midrange while the tube-powered U 67 is darker sounding with a mid-forward tonal presentation.

Of the three, the CX12 has the most flattering sound in many instances, ideal for taming and smoothing out edgy or crunchy sound sources. While its soft, buttery sound will enhance many vocal performances and instrumental sounds, it might not be the ideal choice of microphone when grit and edge are the order of the day.

Although the CX12 sounds lovely in its own right, simply amplified with a high-quality mic-pre, it’s always interesting to hear how a mic responds to creative EQ. Our U 67 for instance, opens out nicely with a 10 kHz boost from a top-notch equaliser yet rarely requires any sort of mid-lift. On the other hand, the CX12 responds well to a slight presence boost in the right circumstances, while its naturally sweet top-end is further enhanced by adding some air, which is achieved beautifully courtesy of the 16 kHz setting on a classic Pultec EQ.

All of these comparisons are based on the mics set to a cardioid polar pattern, but the CX12 has nine selectable patterns, all of which alter its tonal character to some degree. The most notable effect of moving away from the cardioid setting is the reduction in the mic’s perceived warmth. Close mic’ing in cardioid mode brings out this low-mid heft due to the proximity effect, however, switching to omnidirectional or figure-eight lends the mic a leaner sound. 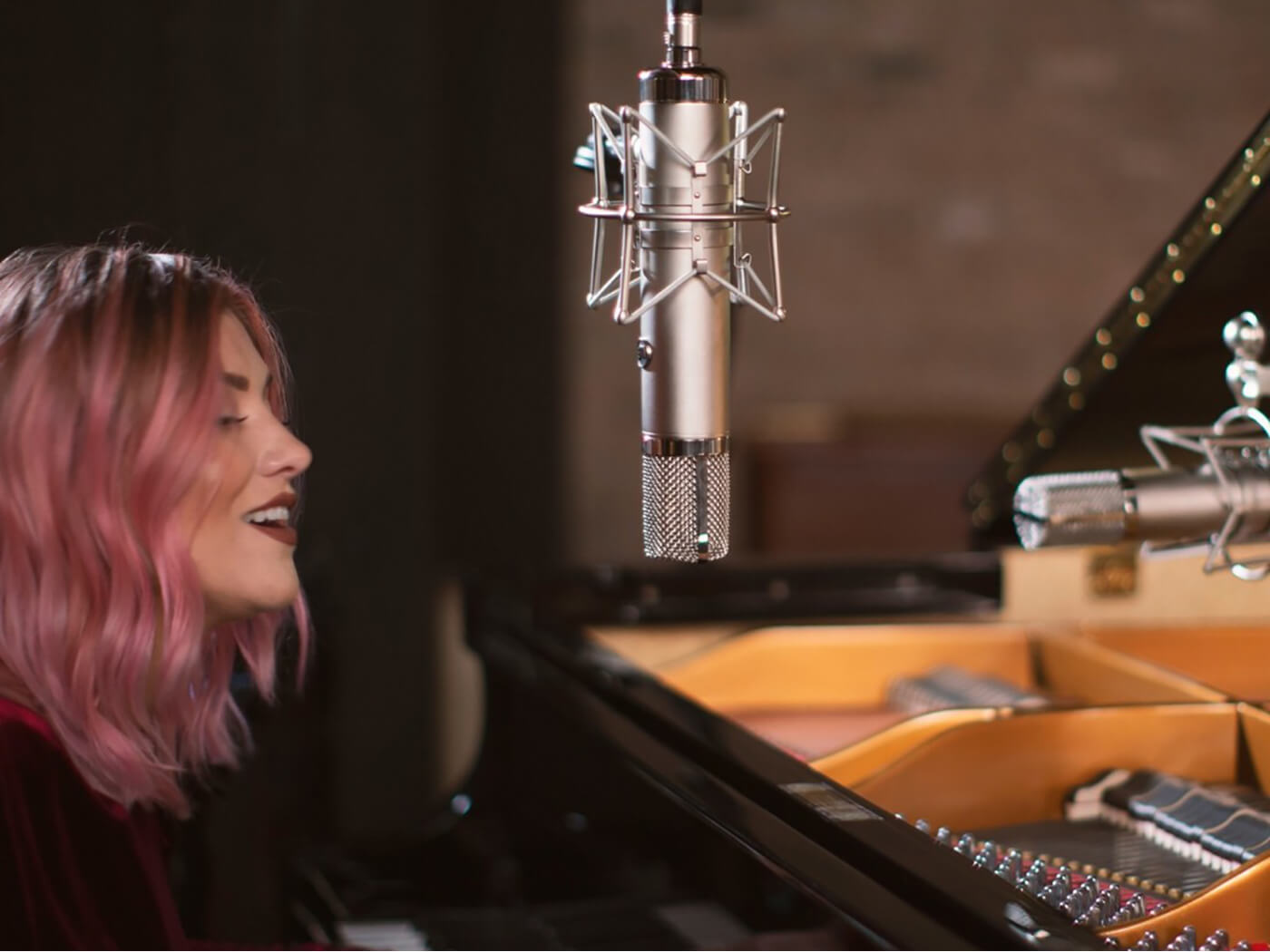 As previously mentioned, a revered use of the original C12 was to record amplified bass guitar on Beatles records. Geoff Emerick’s technique for recording bass during the Sgt. Pepper’s Lonely Hearts Club Band album sessions was to place a C12 in figure-eight mode approximately six feet in front of Paul McCartney’s amp. Recognising that many potential customers will be attracted to the CX12 for this application, it would be remiss of us not to try this technique ourselves. Unfortunately, Sir McCartney was unavailable for the test. However, we do have a nice vintage Fender Bassman, similar to the one used on those later Beatles records, along with our Thermionic Culture Early Bird valve preamp (used throughout the audition period) to add to the vintage/valve vibe.

We won’t pretend that the results are an authentic recreation of the Sgt. Pepper bass sound, yet the tone is exceptional with the figure-eight setting picking up some room ambience to round out the sound nicely.

Ambient room mic’ing with this style of microphone has long been a favoured technique with engineers, and we find the CK12 to be a go-to mic you’d reach out for when, for example, you have a lovely-sounding drum kit in a lovely room and you want to preserve the natural tone without resorting to multi-mic’ing practices. The CK12 really does deliver the big picture in the most expansive yet natural-sounding way.

As a vocal mic, the CX12 shines with its sweet top-end, making it a natural choice for female vocals especially and all manner of vocalists generally, although perhaps not those prone to screaming and shouting. Its present and prominent treble flatters acoustic guitar and piano, for example, however, it’s probably not the best choice to close-mic an extremely loud guitar amplifier – there’s no pad switch on the microphone.

We love the WA-CX12 for its refined and flattering sound. It wears its thermionic credentials with pride and expresses a gorgeous, creamy midrange flanked by a weighty low-end and sparkling treble. It’s a classic in its own right. 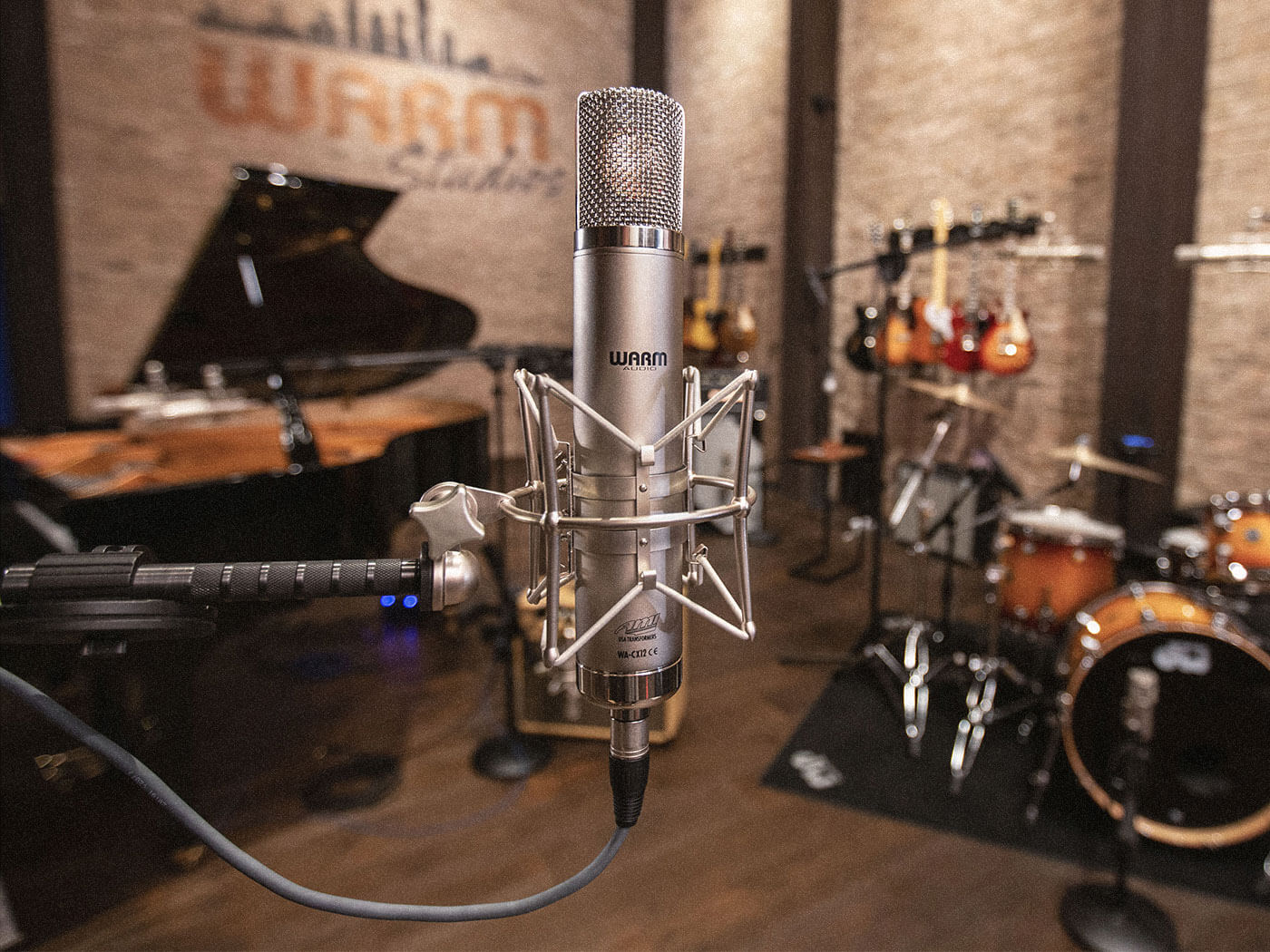