The most anticipated stompbox release in years delivers DSP modelled behemoths of modulation, reverb and delay to pedalboards hungry for classic studio and guitar effects. 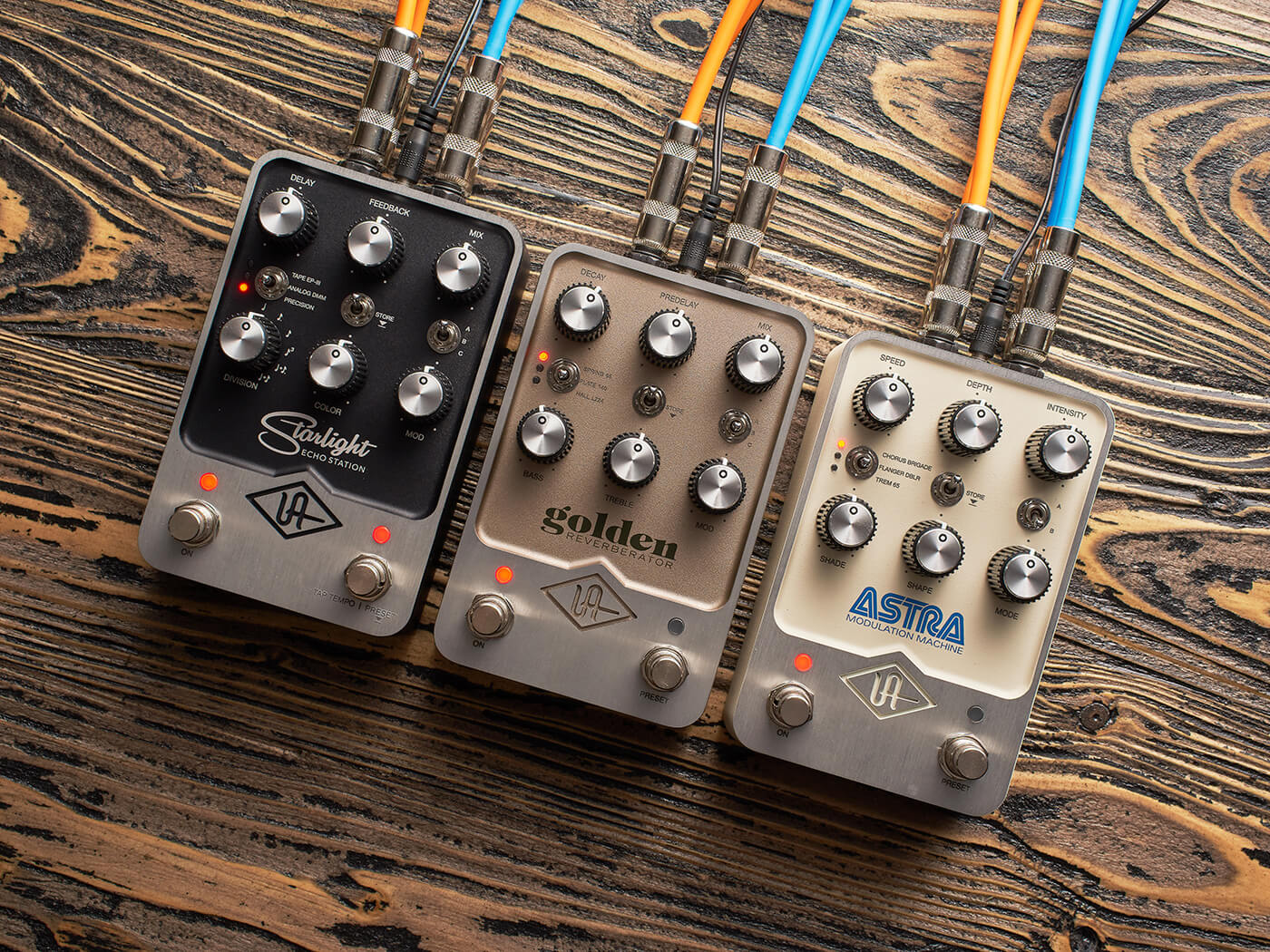 DSP effects pedals are no rarity, but this level of sonic and design quality is something special. UAD in pedal form – what's not to like?

Having spent the 21st century creating modern classics, it’s no surprise that Universal Audio possess the confidence to not just dip a toe into the turbulent effects pedal market but plunge in a whole foot. Its three UAFX pedals, Astra, Golden and Starlight come in crisp yet chunky tapered enclosures topped with dual footswitches, six knobs and three toggle switches. The left footswitch covers the main on/off whilst the right can recall the stored preset and act as a tap tempo. For Astra and Golden, this last use will come online with the imminent release of the UAFX Control mobile app.

Each pedal sports two 1/4-inch TS sockets for full stereo I/O and USB-C for firmware updates, plus a pairing button and LED for the Control app. The DC socket is the only means of power as these pedals require 400mA minimum. The only thing missing may be an expression pedal input. 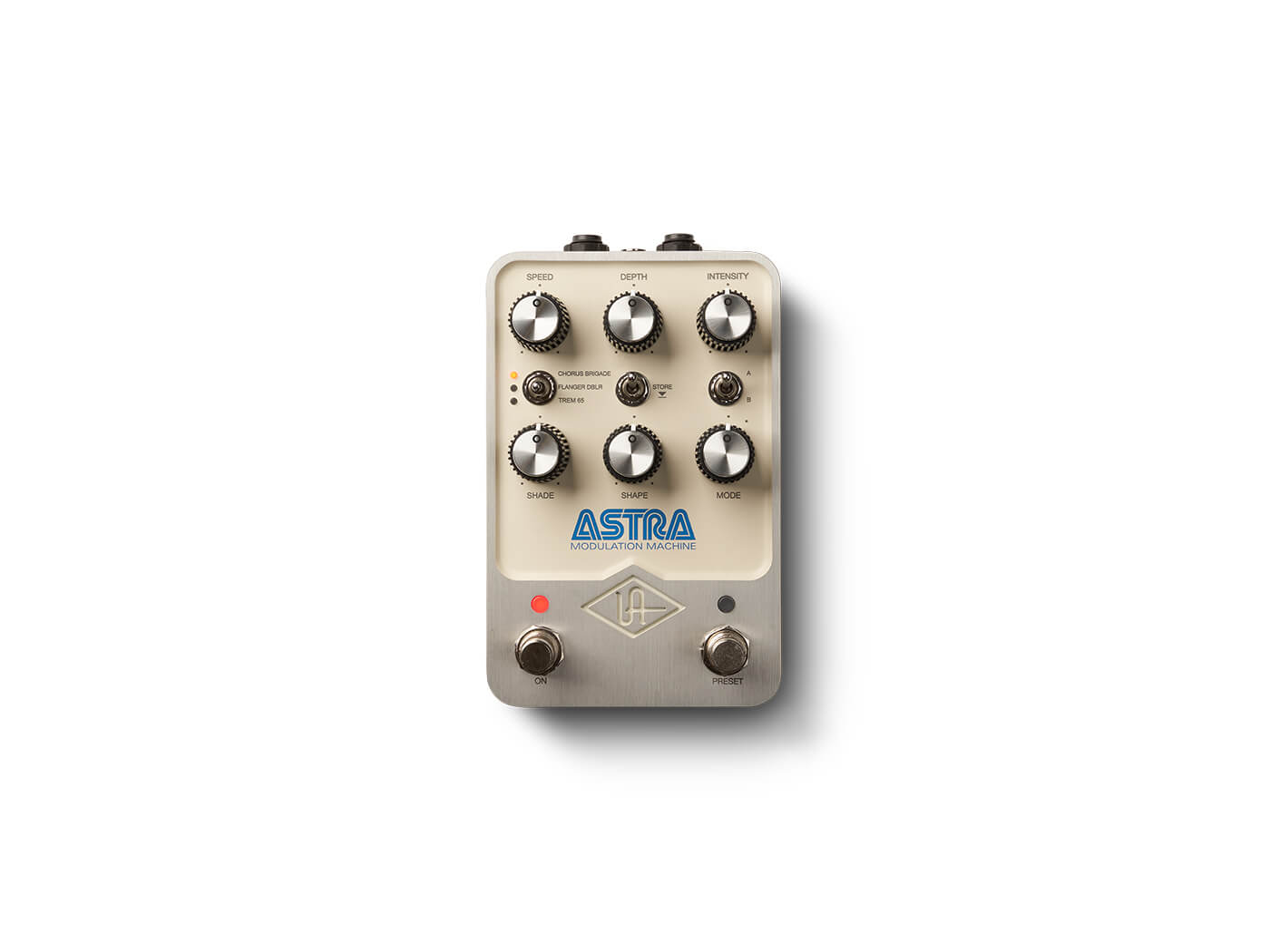 Astra Modulation Machine covers all the bases: Boss chorus, MXR flanging/doubling/phasing and Fender amp tremolos. Though the pedal ships with three algorithms labelled on the enclosure, as is common across the range, once registered via the USB-C connection, two more effects are loaded in: Phaser X90 and Dharma Trem 61. At first, Starlight seemed the standout device, but as I dug into Astra, especially on crunchy guitar and keys, the more it revealed itself as my new favourite modulation pedal.

The most basic effect, Trem 65, does everything you’d want and some extra courtesy of a comprehensive control set and dual mono/stereo signal paths. The modelling is far from basic, worked up from the amplifiers’ optical and valve drive circuits. The additional Dharma Trem 61 effect presents the power amp stage derived harmonic tremolo, a sumptuous swampy vibrato swirl with dynamic control to boot (i.e. speed relative to input amplitude).

Chorus Brigade is just delicious with a full spread of flavours via the effect mode switch and mode knob. Equally, Phaser X90 (based on the MXR) serves up two iterations of a pedal legend with a heap more control but without losing the essential character. It’s hard to fault. Saving a surprise best for last, having never been a flanger fan, the Flanger Dblr is superb in both modes. Yes, you can get the sweeping flanger whine, inverted or not, with just the right range on the feedback (intensity) knob, but dropping the modulation depth control and manually sweeping via the shape knob is a tone shaping slam dunk. Flipping over to the doubler section will take your rock riff and send it careening into the 80s – in a good way. 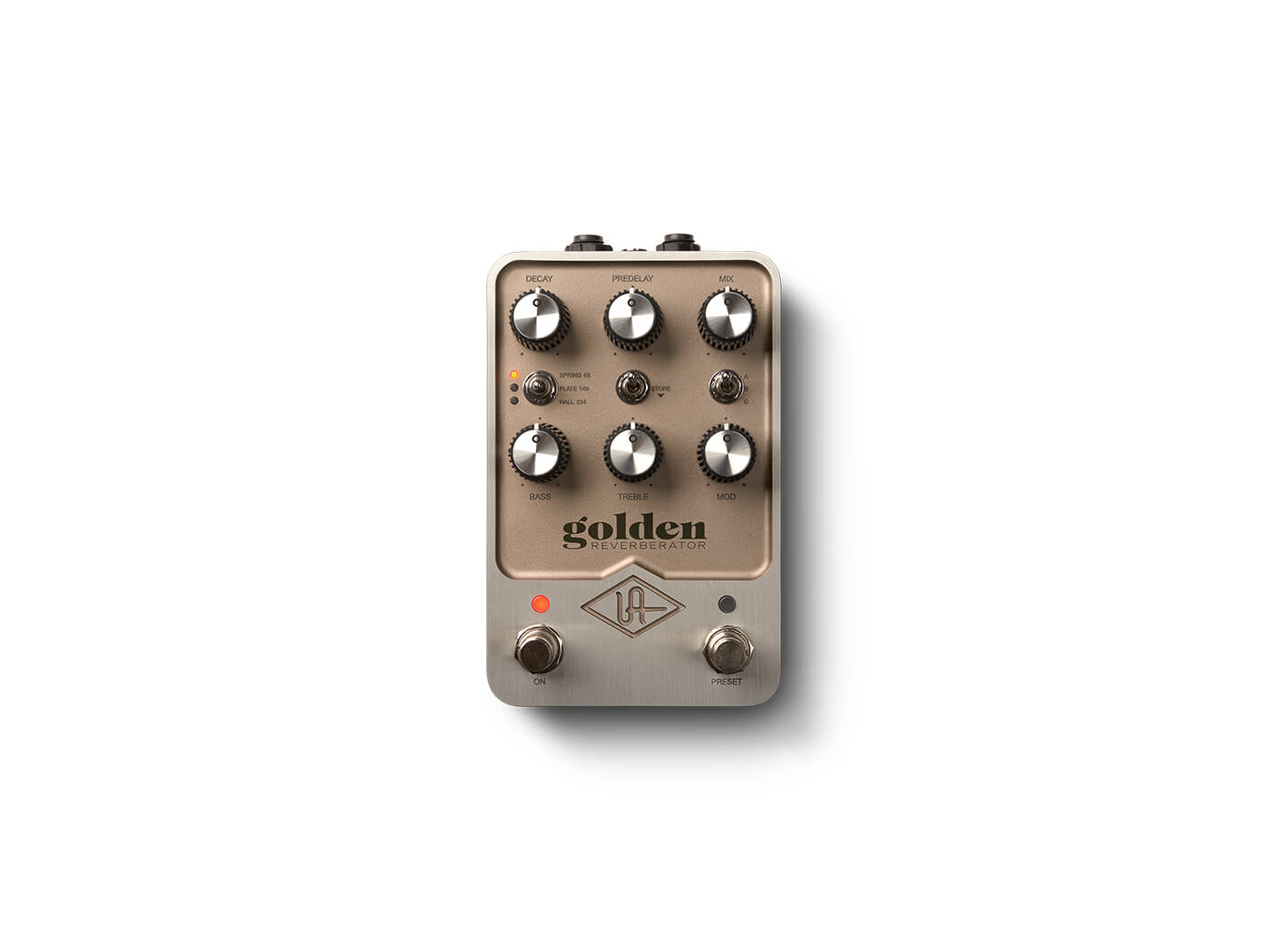 Golden Reverberator models digital and analogue processes, though, by modern standards, the 12-bit converters of the original Lexicon 224 may seem as old school as tape and BBDs. Including the post-registration effect, Chamber & Plate 224, there are twelve base reverbs accessible via the effect type and effect mode switches, each with treble and bass response (treble/bass decay on the 224 models), predelay, decay and modulation controls.

At the top of the selections is Spring 65, a trio of combined spring tank and tube amp circuit models from three choice mid-60s amps, each with three decay length variants (stock, shorter and longer) on the decay knob and wow and flutter on the mod control. These are at once elegant and responsive, staying smooth for sustains and authentically slapping when you played into them hard.

The analogue modelling excellence continues with Plate 140 based on three well-loved examples of EMT plates from The Plant studio in Sausalito, California. Though not identical to the three plates from the UAD plug-in version, these bring the same smooth sheen whether they’re providing short room lifts or full out washes. The mod knob is on hand to add wrinkles when necessary.

The 224 gets two entries to produce six 70s digital reverbs: a room, two halls, two plates and a chamber. Though these can add depth when used lightly, they have all the range necessary for more expansive use, especially with the treble and bass decay controls. In combination with the decay and mod parameters, you can push the 224 reverbs into self-oscillation for huge evolving slabs of sound design goodness. 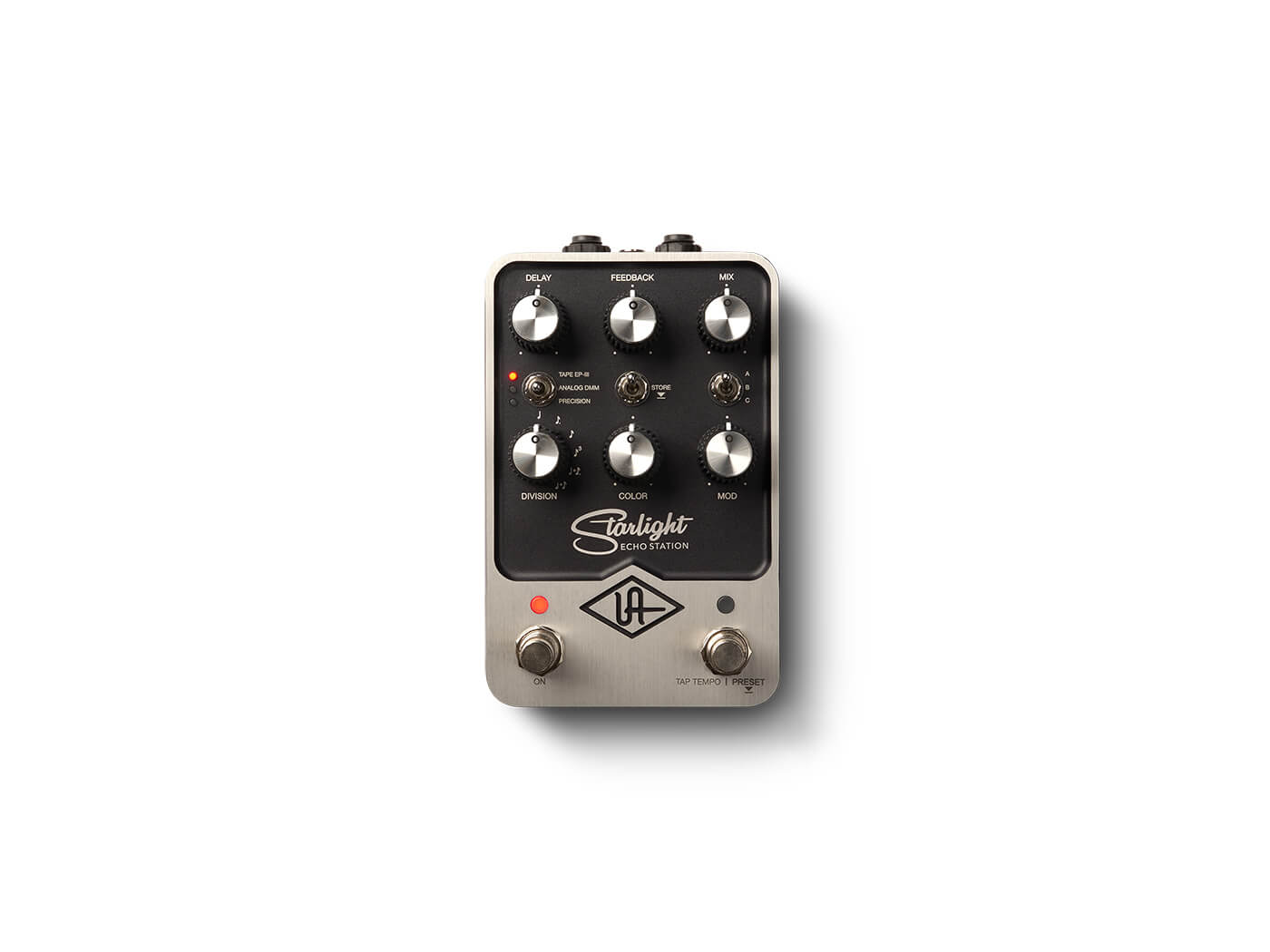 At first, I was sure Starlight Echo Station was the best of the UAFX collection (I can’t decide any more), an impression aided by a pedal aficionado colleague who came to the studio to try them out. He left having ordered Starlight, much to the chagrin of his wallet, and confirmed what I already suspected: Starlight is superb.

The Tape EP-III and Analog DMM models are the main events, and as such, they do not disappoint. Starlight manages to condense the complex interactions between the input level, feedback, modulation and the vagaries of magnetic tape/bucket brigade ICs, whilst expanding the original topologies to cater for tap tempo, multi-tap repeats and stereo panning. These two work beautifully, whether delivering tucked in slapbacks or raging feedback swirls. Tape EP-III comes as three tape stock qualities (mint, used/warm & dark/worn), whilst Analog DMM switches in the original pedal’s chorus or vibrato. The UAFX Control mobile app will add switchable preamp colouration modelled from these two tonal deities.

After that, it seems hard to get excited about a studio-quality digital delay, even with its flange and chorus modes, but I was disabused of this notion after spending far too long doing Joshua Tree-era Stratocaster jangles. Simply put, Precision is a well-appointed, crisp sounding foil to the analogue models it shares a home with. The product registration prize for Starlight is the most idiosyncratic of delays, UA’s own Cooper Time Cube. This rare garden-hose-based delay garnered a reputation for adding depth and dimension in a mix without eating space or clouding the source. In pedal form, it does exactly this with three filter options on the variation switch to shave off lower frequencies and breaks with the original by offering up to 2.5s of delay. It may be weird, but it works exceedingly well on guitar and keyboards.

With regard to quality and price, the UAFX pedals will be entering a space currently occupied by the likes of Strymon, Eventide and Meris. Where they differ is in offering direct and expertly detailed modelling of some of the most revered effects of the past 50 (plus) years.

These pedals may be DSP at heart, but they don’t belie their digital nature in either sound or operation, except for the preset utility and relay-based silent signal switching. Though complete as they are, their digital core means effects and features will be refined and expanded over time. From top to bottom, these are sonically stunning and thoughtfully designed professional tools that easily justify the initial investment.