With its well-regarded DSP-loaded interfaces getting more compact, UA is primed to launch the Apollo Twin X straight into your home studio. Standby for ignition. 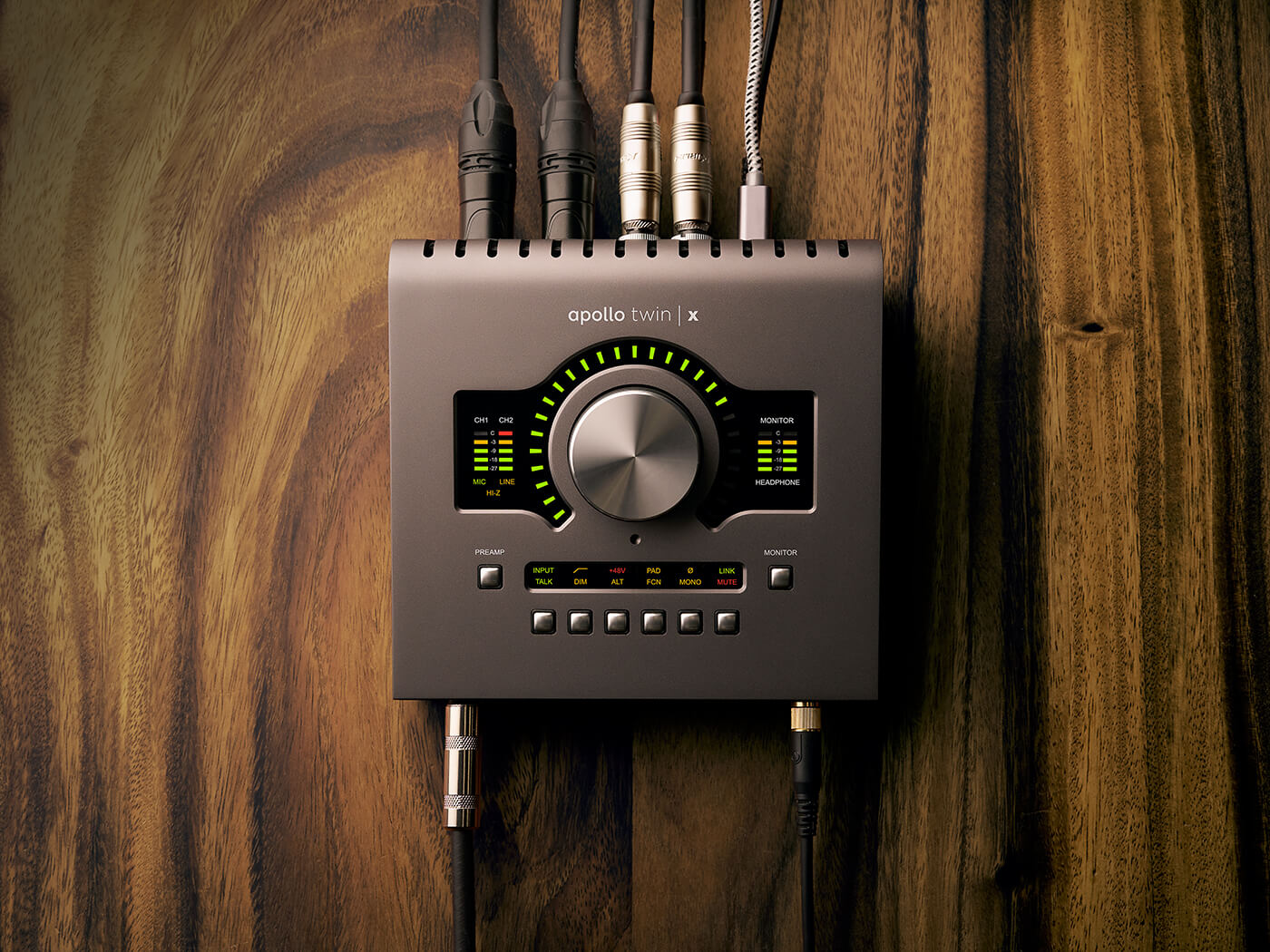 Universal Audio has its roots buried deeply in the history of sound recording and technology. For more than 70 years (albeit with a 14-year hiatus between 1985 to 1999), the company has been responsible for groundbreaking innovations – the layout of modern mixing consoles, per-channel EQ, and the invention of send busses, to name but a few – alongside some hugely influential and still-desirable pieces of kit under the Urei and Teletronix brands.

Since being relaunched by James and Bill Jr, the sons of original founder Bill Putnam, in 1999, UA has focused most of its attention on the ever-growing market for products that enhance and improve the experience of computer-based sound recording. One of the biggest successes here has been the Apollo line of audio interfaces, whose combination of high-quality analogue circuitry, exceptional converter technology, and seamless DSP support has proved popular. The latest addition to this range is the Apollo Twin X, a Thunderbolt-3 audio interface that squeezes all of the goodness UA is known for into a compact, portable and affordable desktop unit. 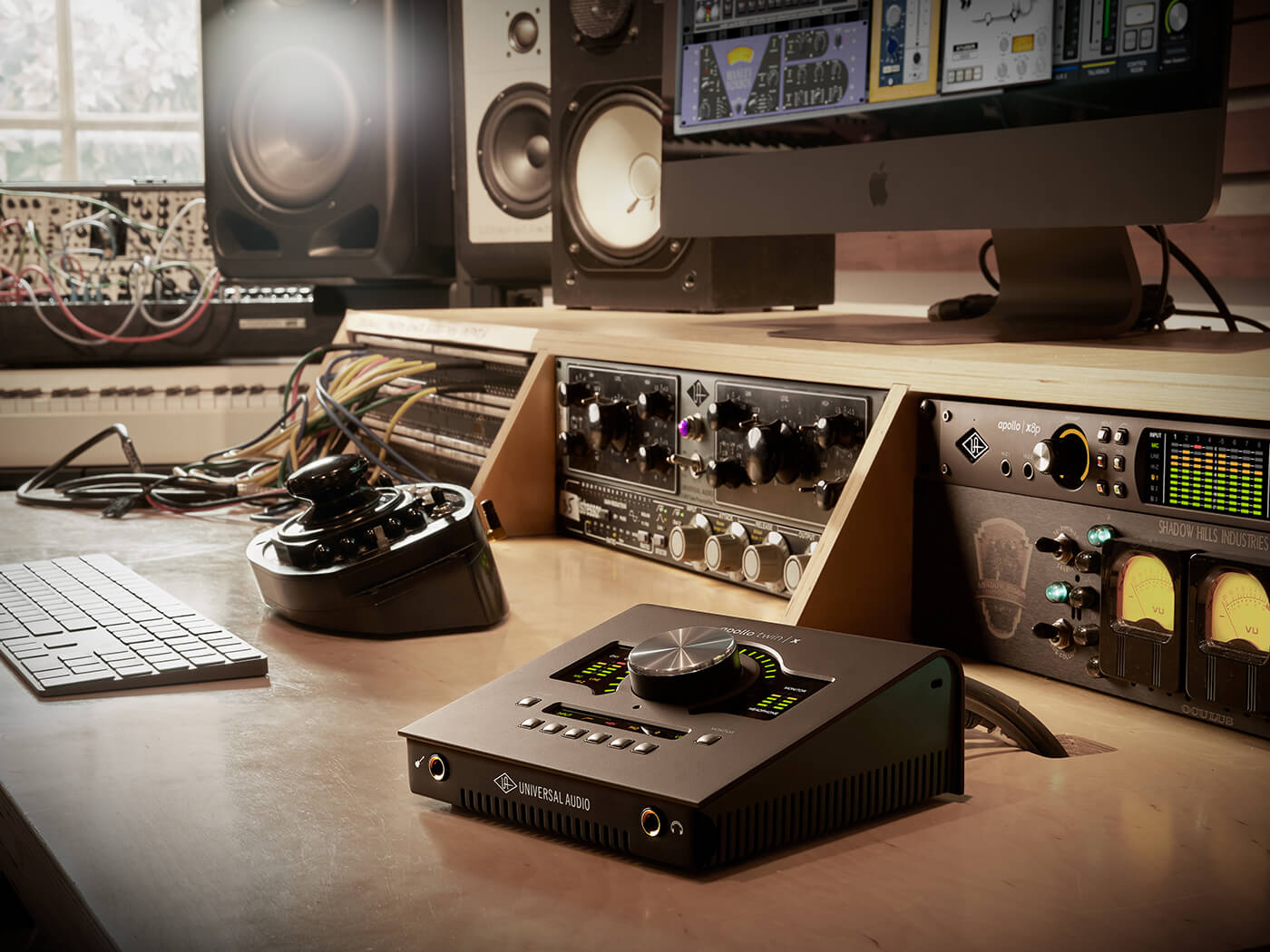 Apollo Twin X comes in two versions, Duo and Quad, and this reflects the number of DSP processing cores the unit contains. Here, we’re looking at the Quad variant, with four DSP cores. Other than this detail, the two are identical.

As you might expect with a compact interface of this sort, Twin X’s connectivity is quite limited. The two input channels are driven from a pair of XLR/jack hybrid sockets at the rear of the unit, with an instrument-level input on the front that overrides the rear channel-one input. These inputs feed to a pair of UA’s acclaimed Unison preamps. In basic use, these provide the clean high-quality signal essential for a good recording, but Unison’s real trick is its ability to load in classic channel strip, processor, and guitar and bass amplifier models. What makes these models so effective is that they modify the behaviour of the preamp’s analogue circuitry while also applying modelling algorithms in the digital domain, which results in some exceptionally accurate emulations of true-analogue mixing consoles and equipment.

Alongside the analogue inputs is a single optical digital-input connector that can operate in S/PDIF or ADAT modes. As with any optical digital I/O, the specifics depend on the sample rate being used – for example, the S/PDIF input is only available if the interface is running at or below 96kHz, while the ADAT input provides eight inputs at up to 48kHz, four at 88.2kHz or 96kHz, and just two when running at 176.4kHz or 192kHz.

For outputs, Twin X has a main monitor output pair alongside a second pair of outputs that can be used for driving a second set of monitors, or as a couple of auxiliary output channels from your DAW. There’s also a headphone output on the front of the unit, and this has its own bus within the Twin X’s mixer, and can carry a different mix to the main and/or alternate outputs.

The unit itself has a simple and intuitive set of buttons and meters on its top surface, along with a large data-entry dial. This dial serves chiefly as a monitor-volume controller but can also be used for setting input gain, and alternate monitor and headphone volumes. There’s also a line of buttons along the unit, which allow you to toggle phantom power, and mute the monitors, for example, and generally provide more control over the preamps and outputs. To get full control over the Twin X’s abilities, though, you need to turn to the UA Console software. 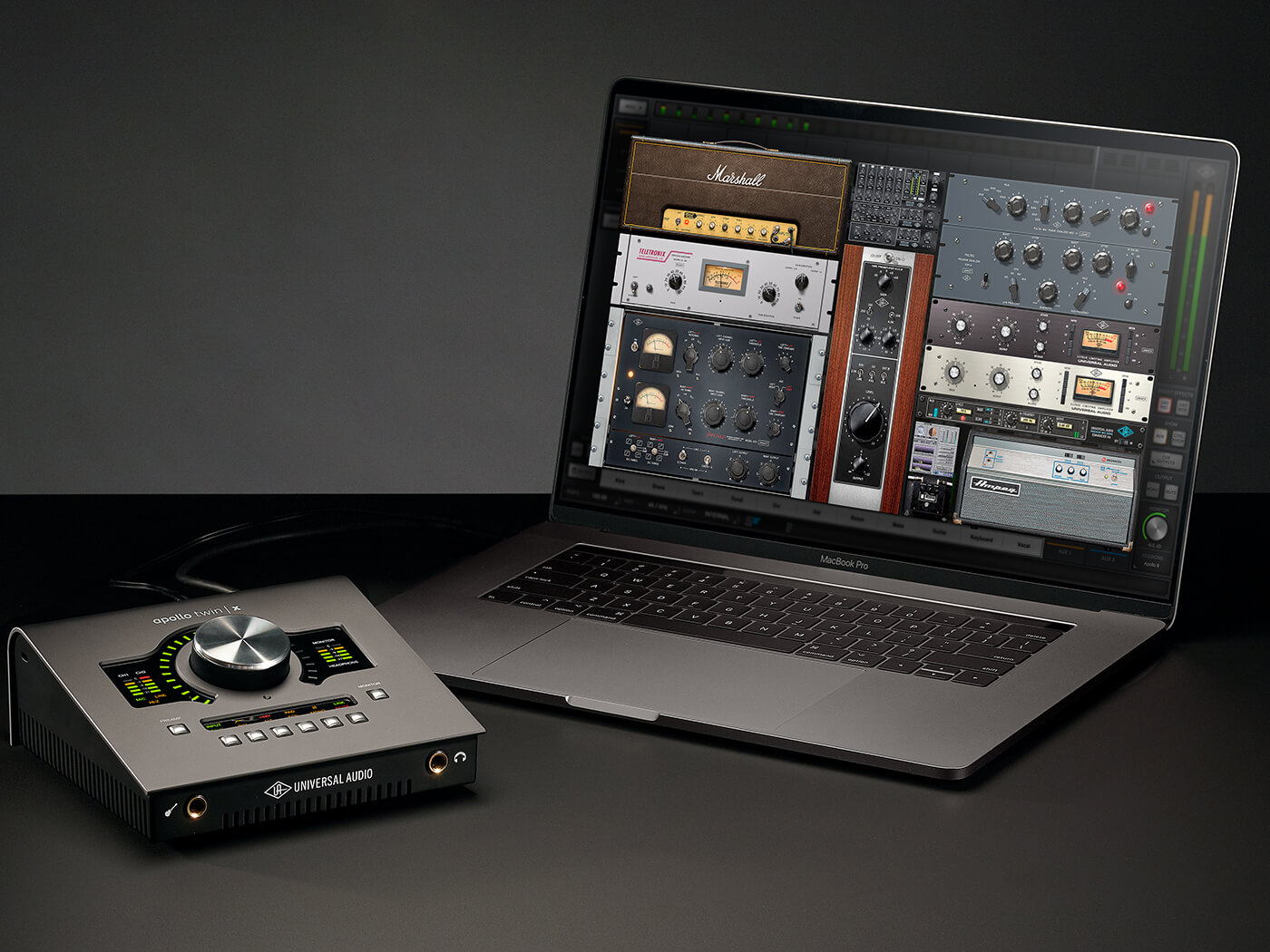 Console is the heart of the Apollo system, providing access to all mixer parameters and settings, as well as allowing you to load models into the Unison preamps, and UAD-2 plug-ins into each channel’s four insert points. You can choose whether effects loaded in this way are applied pre- or post-DAW – that is, whether the results of processing are passed into the DAW for recording or are only audible on the monitor signal. This is tremendously useful, as it allows you to create great-sounding ultra-low latency monitor and cue mixes without committing to a particular sound during track-laying or, conversely, to render an effect chain as part of the sound to be recorded.

All UAD-2 plug-ins come installed along with the UA driver software, and are available in a time-limited demo mode. Twin X comes with UA’s Realtime Analog Classic bundle, which features 14 plug-ins that provide solutions for most studio tasks, including compression, EQ, reverb and guitar amps. There are plenty more UAD-2 plug-ins to choose from, many of which are exceptional examples of what can be achieved with a plug-in, and once you’re signed up with UA, the company will send you no end of offers to help you build your collection.

As well as running directly within Console, UAD-2 plug-ins all have ‘wrapped’ versions (VST, AU, etc) that you can load and work with in your DAW but whose processing is handed off to the Twin X’s DSP. This provides near-seamless integration between the DSP hardware and your DAW, with no discernible difference between working with a regular plug-in or a UAD-2 plug-in.

One piece of a larger picture

Naturally, the number of simultaneous plug-ins that can be run depends on the number of DSP cores within your Apollo system, the complexity of the plug-ins you’re using, and the sample rate you’re working at. This last point is important, particularly if you’re working at 176.4kHz or 192kHz, because these high sample rates use considerably more of the available DSP power than rates of 96kHz or below.

This and the Twin X’s limited connectivity can be dealt with by adding more Apollo interfaces and UAD-2 processors to your rig, with the Console and driver software supporting up to six UAD-2 devices in total, four of which can be Apollo audio interfaces.

As a standalone unit, then, the Apollo Twin X is an impressive audio interface, delivering the features and quality we’ve come to expect from Universal Audio within a compact enclosure and at a comparatively affordable price. As part of a larger Apollo/UAD-2 rig, Twin X can serve as an ideal desktop monitor controller, monitor output path, and talkback hub.

Universal Audio’s Apollo range of interfaces ticks a lot of boxes when it comes to what one needs from an audio I/O: high-quality signal paths and converters, solid and stable software that’s easy to use, and features that have clearly been designed by people who know their stuff when it comes to sound recording. 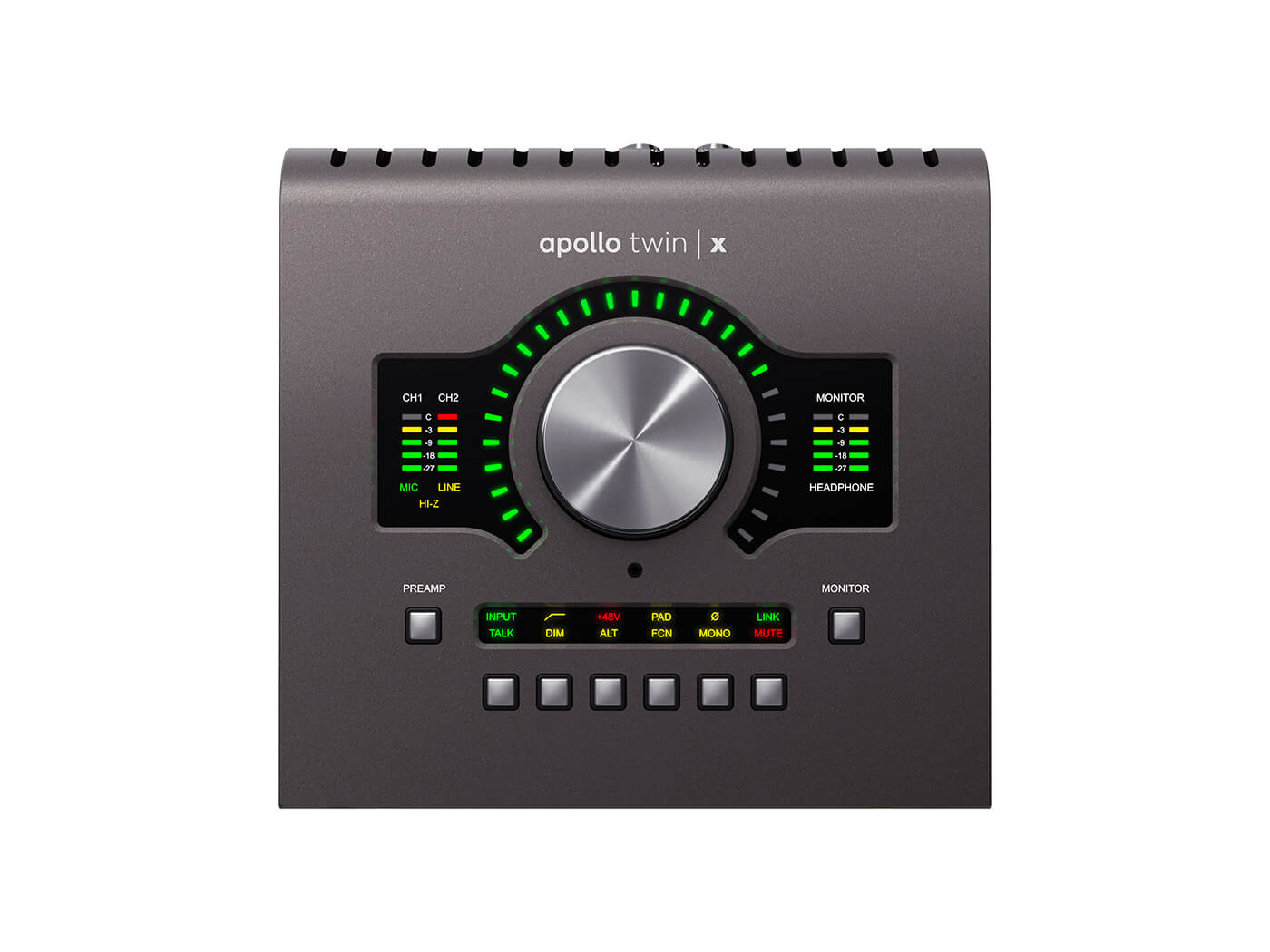 Among the most compelling things about Apollo interfaces, though, is the built-in DSP and all the advantages it brings, as well as the effectiveness of the Unison preamps, which can make your recordings sound like they were performed on high-end analogue hardware. Apollo Twin X is a relatively affordable way to strengthen your studio capabilities, and an ideal hub around which you can grow a larger, more capable Apollo system. 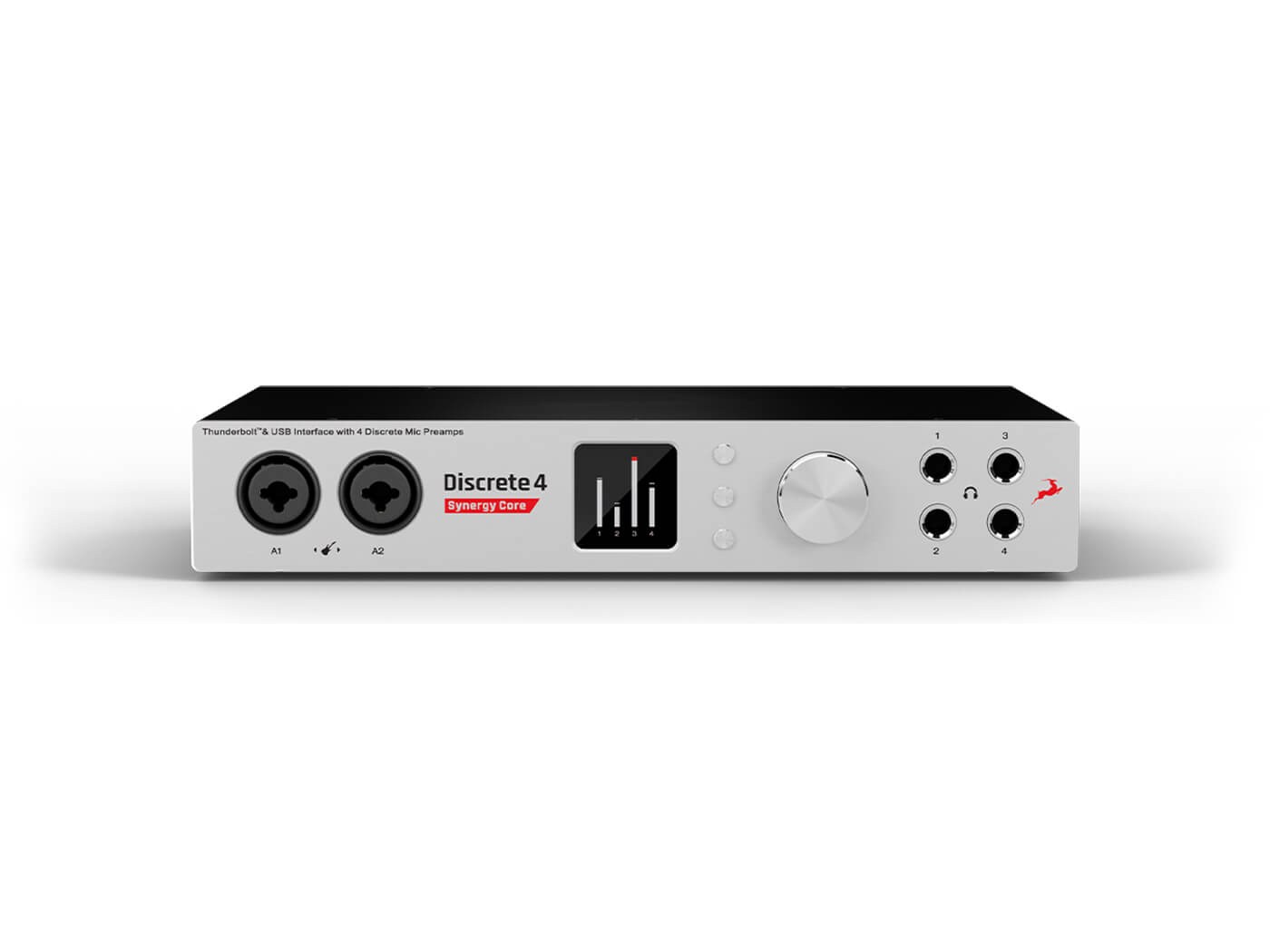 The Antelope Discrete 4 is a 4-in/6-out Thunderbolt and USB audio interface – like many other interfaces, the I/O can be expanded via ADAT digital I/O. The unit’s Synergy Core combines two DSP chips with a single FPGA processor to support the suite of 36 built-in effects. 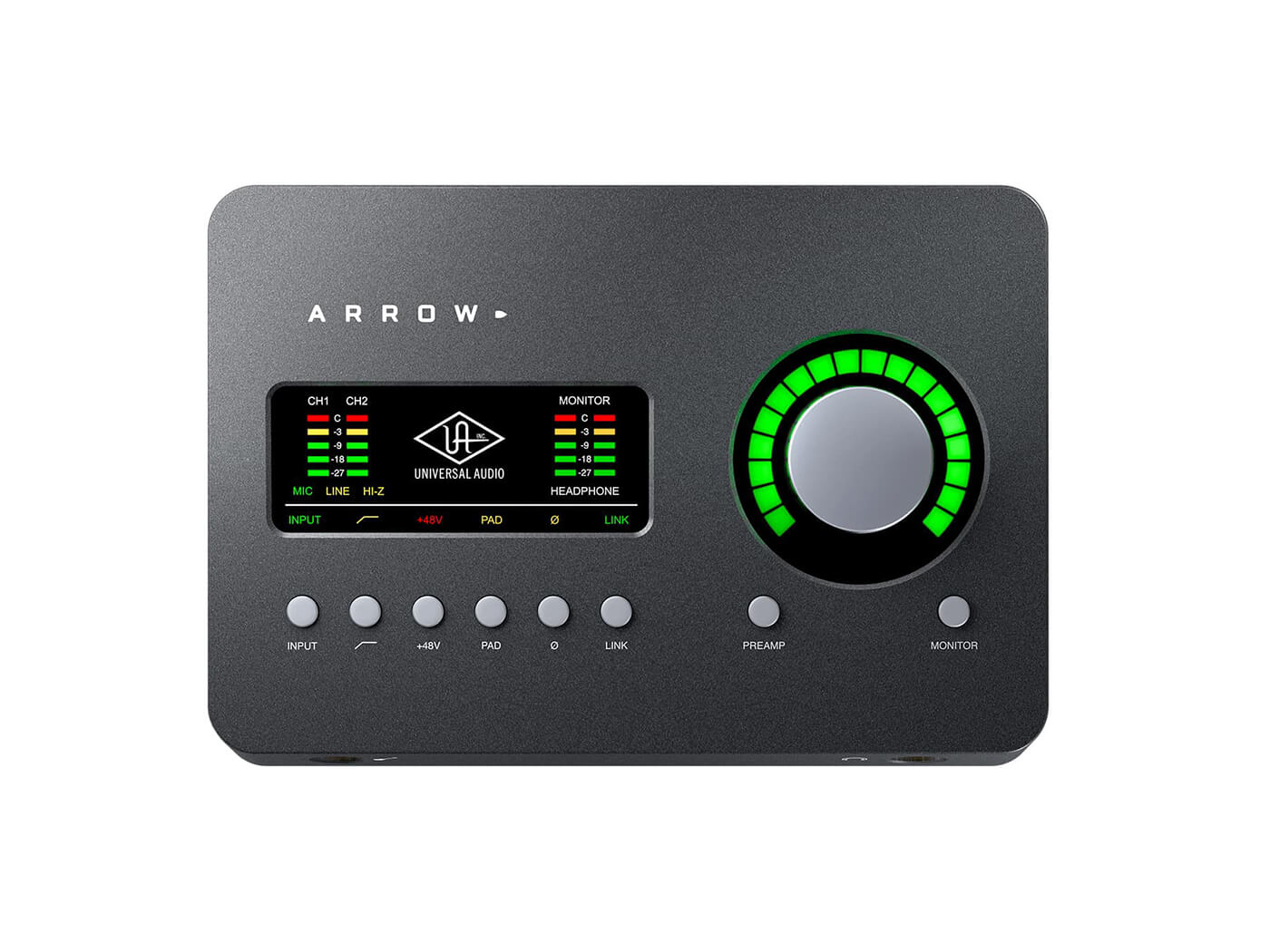 If you want a little slice of the UA pie but can’t afford an Apollo interface, the Arrow may be for you. The 2-in/2-out configuration may be basic but the Arrow features Unison preamps and UAD-2 processing, and, thanks to being compact and bus-powered, it’s plenty portable.