Thermionic’s new two-channel valve preamp is designed to be an indispensable unit for ribbon mic processing and could, quite possibly, be one of the very best additions to our outboard arsenal. 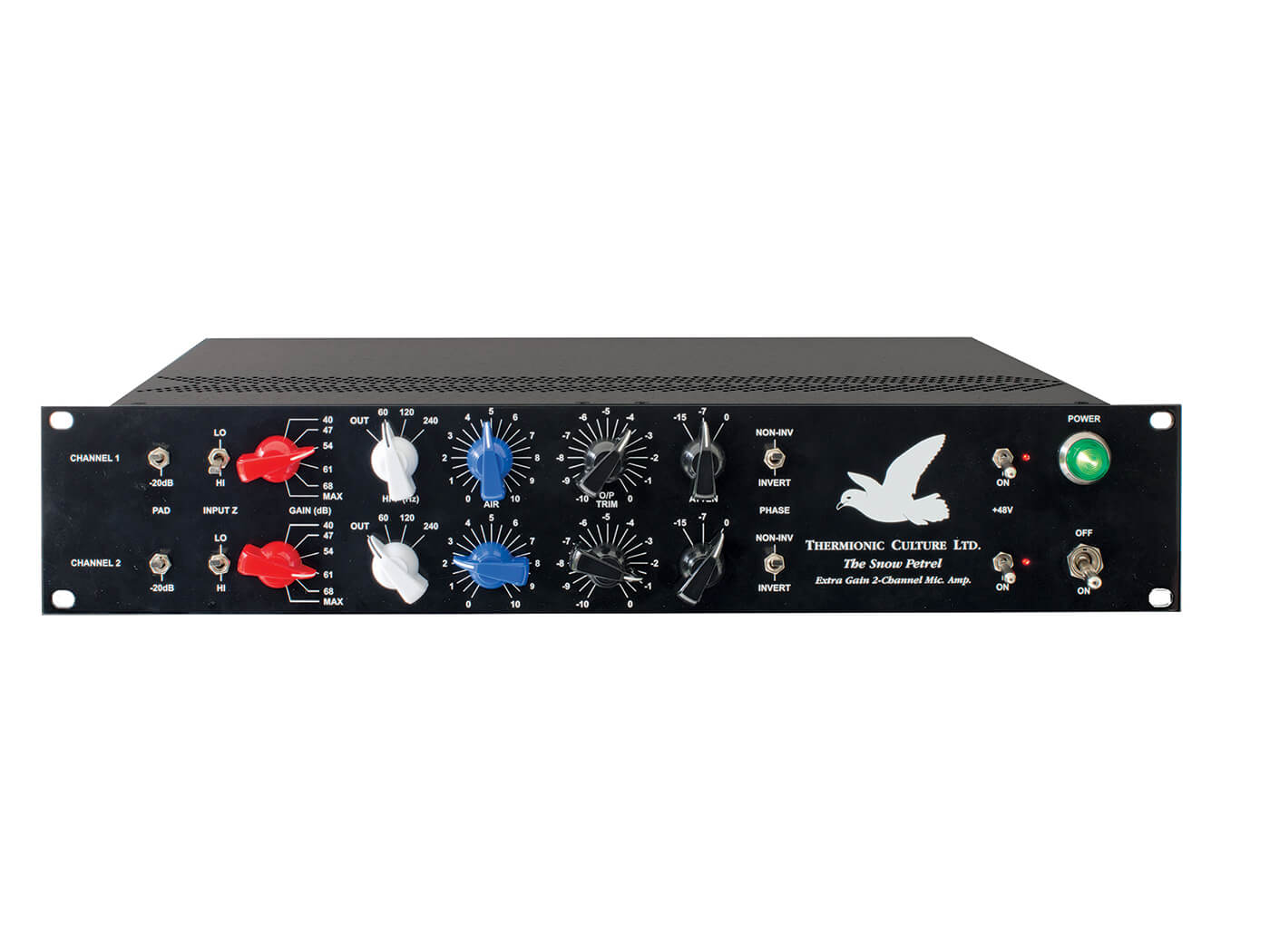 Thermionic Culture‘s Snow Petrel is the company’s newest two-channel microphone preamplifier. It joins the original Early Bird and Rooster 2 mic preamps (both of which we have in our review studio), however this new model is a high-gain, low-noise amplifier designed to work particularly well with insensitive ribbon mics. Like all TC products, the Snow Petrel is an all-valve design, using premium tubes from Mullard, JJ and Tung-Sol.

Unlike the other TC preamps, the Snow Petrel does not feature conventional top, mid and low-end EQ, instead offering an ‘Air’ control for extreme top-end enhancement. Designer Vic Keary’s intention was to create an ultra-clean amplifier that would be a perfect match for the legendary Coles 4038 ribbon microphone, a notoriously gain-hungry mic. The 4038 possesses arguably the smoothest and most sumptuous midrange response of any mic, however it responds well to a high-end boost from a good equaliser; this is where the Air control comes into play. To ensure complete compatibility, Coles Electroacoustics’ owner Colin Beanland helped refine the Snow Petrel’s design, while Brian Sowter (Sowter Transformers) and Tim Vine-Lott (ex Technical Director at Air Studios) also provided creative input.

Some months ago I heard the original prototype unit, which didn’t include an Output Trim control (remaining faithful to the ‘ultra-clean’ premise), however two stages of output control have been added to allow the preamp to be driven harder. The main Output Trim appears after the first two valve stages, offering various amounts of second harmonic colouration, while the ATTEN switch is at the final output, enabling transformer and valve distortion.

Looking at the front panel, Input Gain is adjusted via a six-position rotary switch which, like most of the switches and pots, has a vintage-style chicken-head knob. Other controls featuring the retro-looking knobs are the high-pass filter, a 6dB per octave roll off available at 60Hz, 120Hz or 240Hz.

The Air control at full pelt provides a 5dB boost at 10kHz, peaking at 22kHz, while the Output Trim reduces the output of the input stages up to a maximum of 10dB; the final ATTEN switch appears after the output transformer, attenuating the signal by 7dB or 15dB and allowing some transformer saturation.

Controls selectable with simple toggle switches comprise a Pad (20dB of attenuation before the input transformer), Lo/Hi Z input selection and +48v phantom power. Bearing in mind the unit was conceived primarily to work optimally with delicate ribbon designs easily damaged by a dose of phantom power, this switch needs to be pulled before engaging, ensuring the switch can’t be accidentally flipped. Standard XLR connectors are situated on the rear panel. 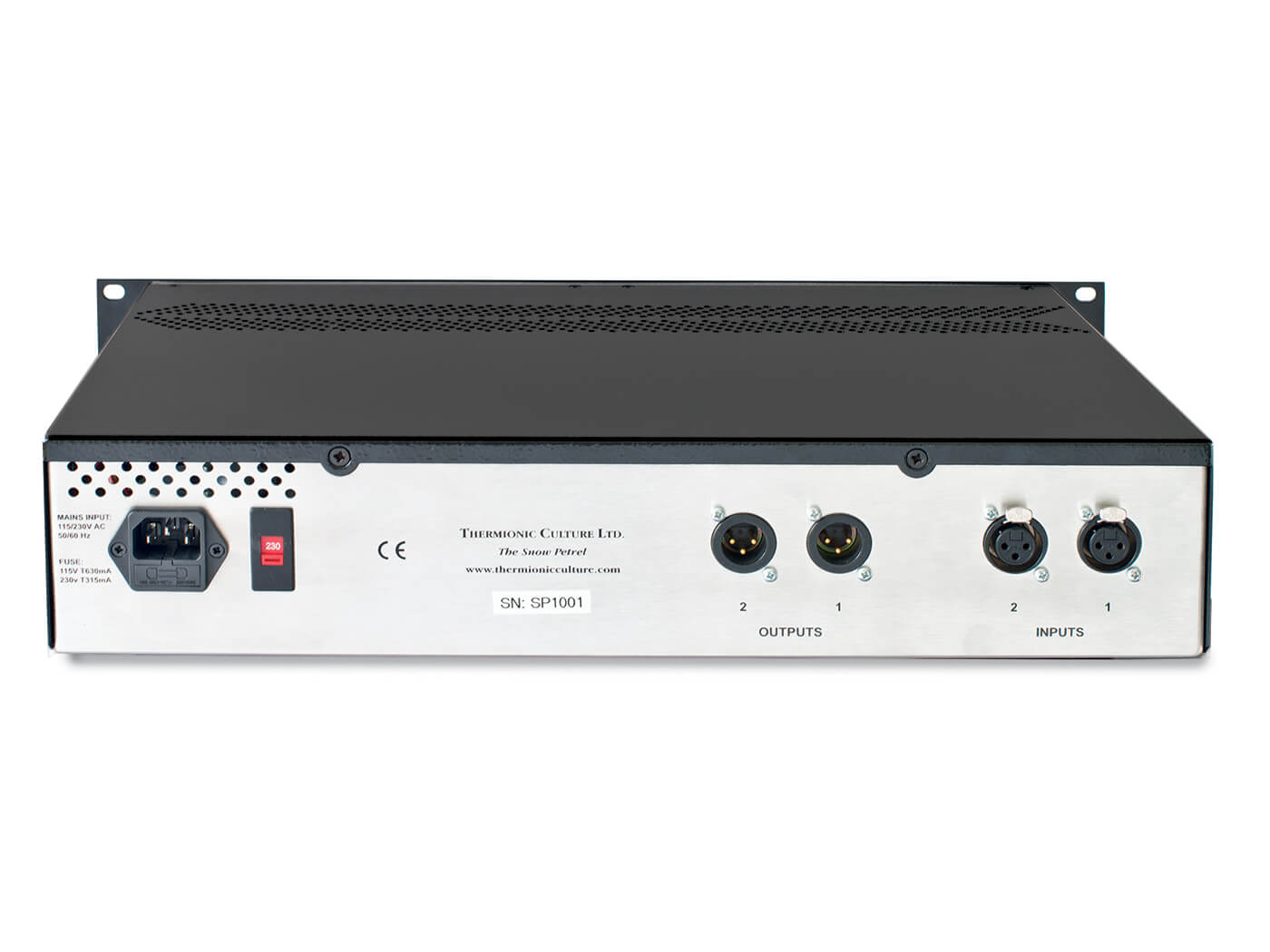 Following thirty minutes warm-up time, I plug in an AKG C414 and, once phantom power is engaged, record some acoustic guitar. Before critically evaluating the sound, I record more passes through our Thermionic Culture Early Bird and Rooster 2 preamps as well as a pass through our solid state DDA console.

Side-by-side comparison clearly reveals the family resemblance between the valve units, with all three sounding clear and open with smooth yet sweet highs. The transistor-equipped console presents a thicker, mid-forward sound with less nuance and filigree detail. The high frequencies are less spacious in solid-state form too, lacking the sweetly sparkling Thermionic sound.

Having established the Snow Petrel’s unmistakable TC character, I thought it appropriate to connect our pair of Coles 4038 ribbons (once phantom power was disengaged of course) in Lo Z mode to record some drums. The Coles are wonderful mics to record a full drum kit sound, their crisp transient response and sumptuously fat midrange perfectly capturing the kit’s natural sound. In fact, a sole 4038 can be seen suspended above Ringo Starr’s kit in photos of early Beatles recording sessions. In a great sounding room with a well-sorted drum kit, a single Coles 4038 placed in front of the kit is still a smart choice (if mono drums are not a problem for you) as it avoids any phase issues that can arise with multi-mic set-ups.

For our test I adopt another classic drum miking technique, namely Glyn John’s revolutionary method of recording stereo drums. We’ve got a feature about this technique on our website so won’t elaborate now, however for the uninitiated I explain it here.

Starting with no attenuation, the kit sounds clean and natural yet full-bodied and dynamic. Dialling in the Air control creates a halo of space around the kit, highlighting harmonics from cymbals and bringing out the snap of the snare drum. In the Snow Petrel’s manual, it’s stated that Glyn Johns is on record as saying that part of his drum miking technique was to overdrive the mixing console. This is where the unit’s attenuation controls come into play as I reduce the output while driving the preamp harder with added gain. The result is a more lively sound with plenty of punch and drive, while pushing harder still introduces some gritty saturation and slightly suppressed dynamics.

Later, I record some vocals using our Neumann U67, running the output from the Snow Petrel into our Thermionic Culture Phoenix compressor for an all valve signal path. I engage the HPF at 120Hz and switch to the Hi Z input for a marginally brighter tone. Like the Coles ribbon mics, the dark-sounding U67’s top-end is a little muted so once again the Air control is employed to great effect. Unlike regular EQ controls where less is often more, the Air control can be used quite liberally to great effect, so don’t be afraid to crank it up.

Returning to the Coles ribbon mic, I use it to record some overdubbed bass guitar, placing it around five feet (1.5m) in front of the cab to capture the low-end. Again, I made full use of the preamp’s ample gain, allowing me to gently saturate the output valves and transformer to create a throaty tone.

Unlike many microphone preamplifier units, the Snow Petrel does not have a DI input, however it arrived with TC’s new Robin passive DI Box (£299), which features a high-spec Sowter transformer. This transformer can be bypassed so you connect directly to the Snow Petrel’s input with no added colouration from the Robin. The difference in sound between the two settings is subtle when used with electronic organ, however the Robin is a high quality, rugged unit and a worthwhile companion to the Snow Petrel.

Thermionic Culture’s latest microphone preamplifier is a great addition to the company’s range of brilliant valve outboard gear. As an amplifier for the legendary Coles 4038, the Snow Petrel is second to none, bringing out the best in this evergreen design. It’s no one-trick-pony though and the ample gain on offer will realise the full potential of all your microphones, no matter how power hungry they are.

I know chief designer Vic Keary’s main goal was to build a super-clean high-gain amplifier for insensitive ribbon mics, however his decision to include output trim allowing valve saturation adds immensely to the Snow Petrel’s sonic versatility. Used as intended, at full output with adequate input gain and with a halo of sparkling ‘Air’, your signal will be enhanced with a classic valve sound that’s pure as the driven snow.

If we take the computer programmers’ maxim GIGO (Garbage In, Garbage Out) seriously, it makes sense that the signal from your microphone will be compromised if not treated to decent amplification. I recall with horror some of the cheap & nasty mixing consoles we used in the 1990s, which mangled the audio with their poor in-built mic/line preamps.
A high quality microphone preamplifier is a must-have for any serious engineer/producer and, as much as I like solid-state units from Neve or clones of vintage American API preamps, valve units have a special magic transistors cannot replicate. Thermionic Culture’s previous preamps – the Early Bird and Rooster – are my favourites in our review studio’s collection.

The new Snow Petrel sounds fantastic with any microphone, however owners of insensitive ribbon mics will appreciate not only the plentiful clean gain on offer here, but also the wonderful Air control that brings out the very best in ribbon designs, especially the Coles 4038. 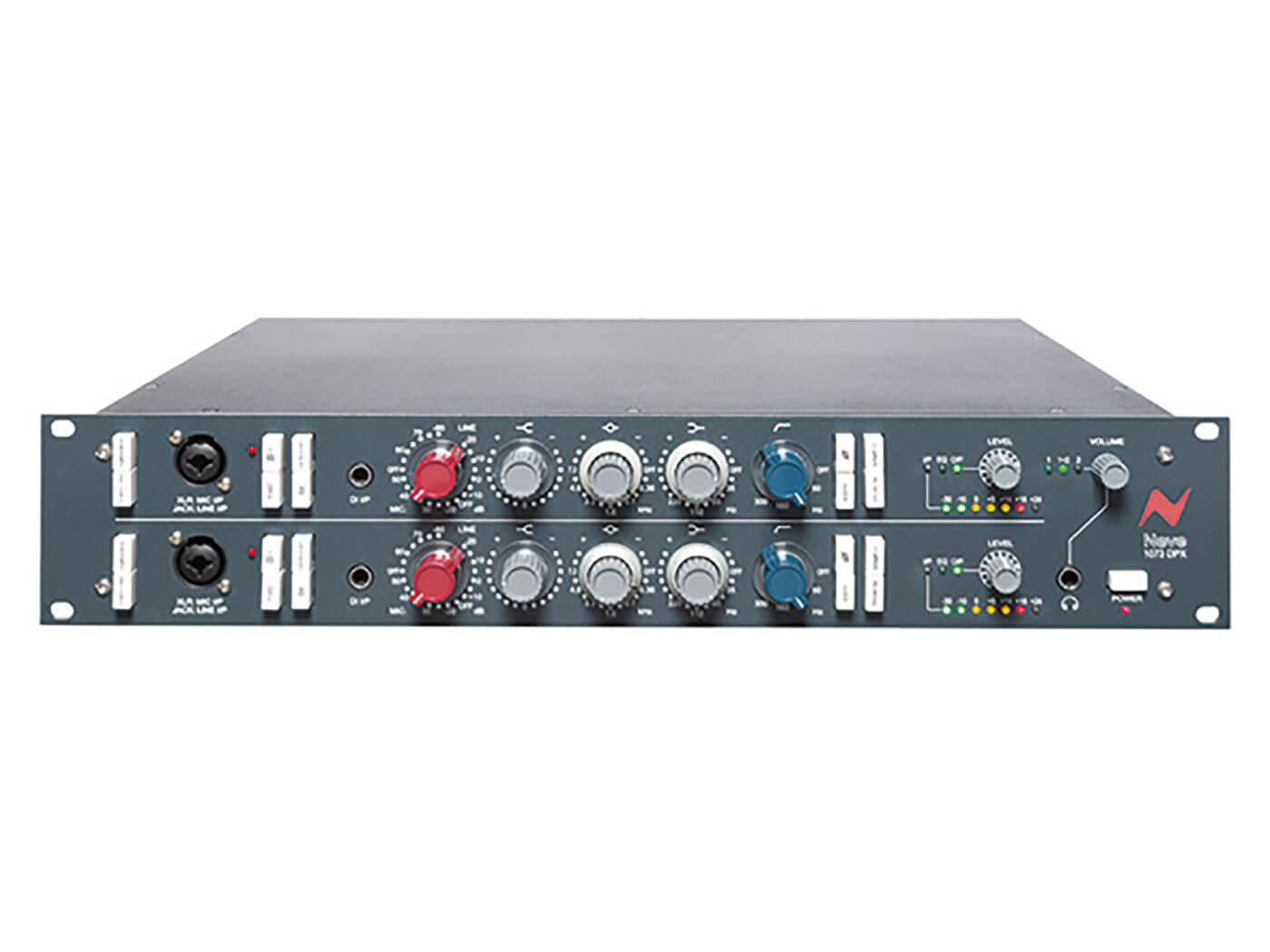 The current version of the most legendary British solid-state mix-pre ever offers two channels of amplification along with three bands of EQ. Exclusive Marinair transformers and Greyhill pots and switches elevate it from the many ’73-style copies on the market. 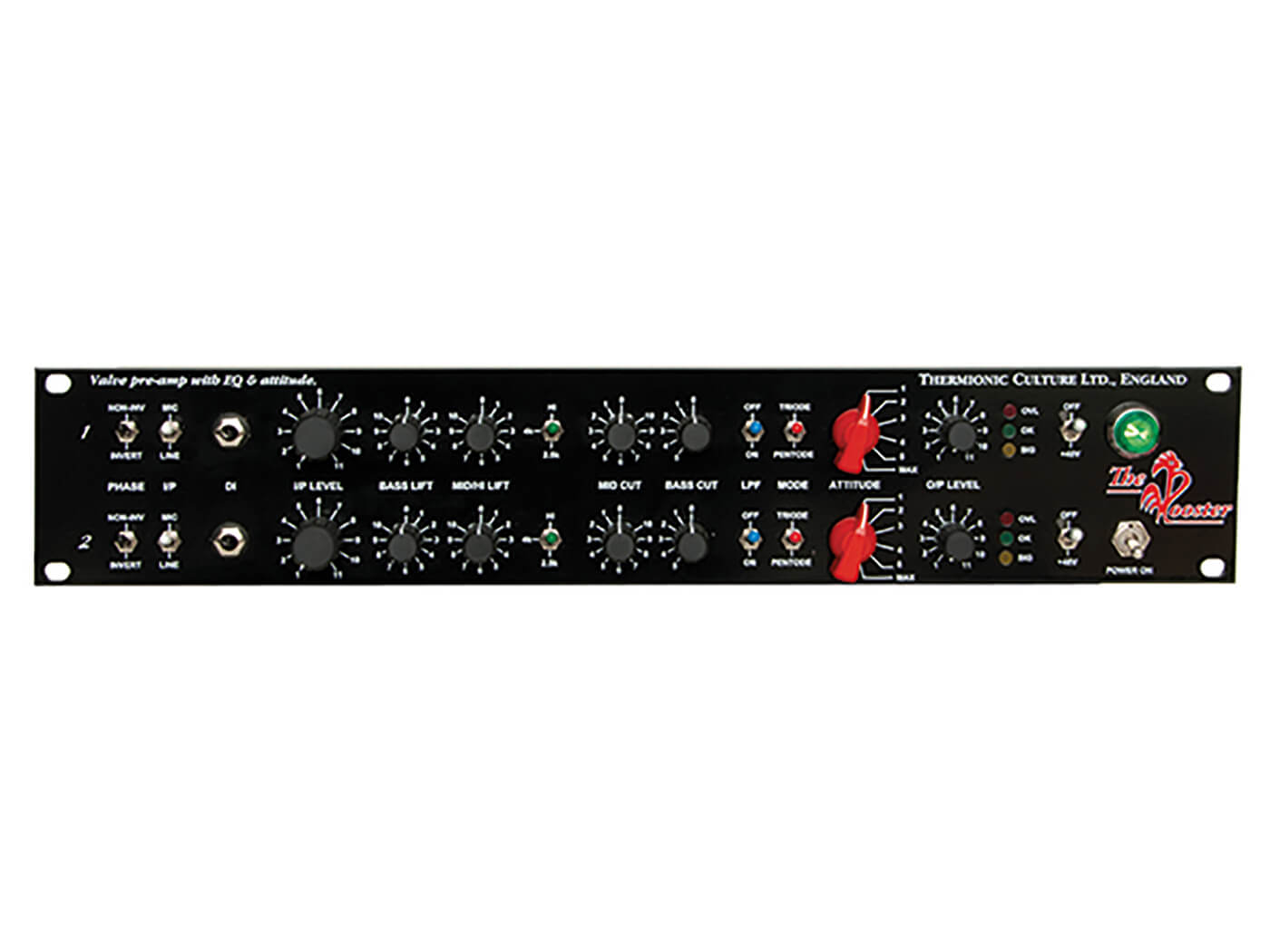 This valve microphone preamplifier features some superb EQ filters along with TC’s Attitude control, which provides a wonderfully musical saturation along the same lines as the company’s Culture Vulture valve distortion unit. It also has an integrated DI input.