Pro Tools Carbon is Avid’s first true ‘Pro Tools In The Box’ for musicians and producers. Is it the dawn of a new beginning or a false start? 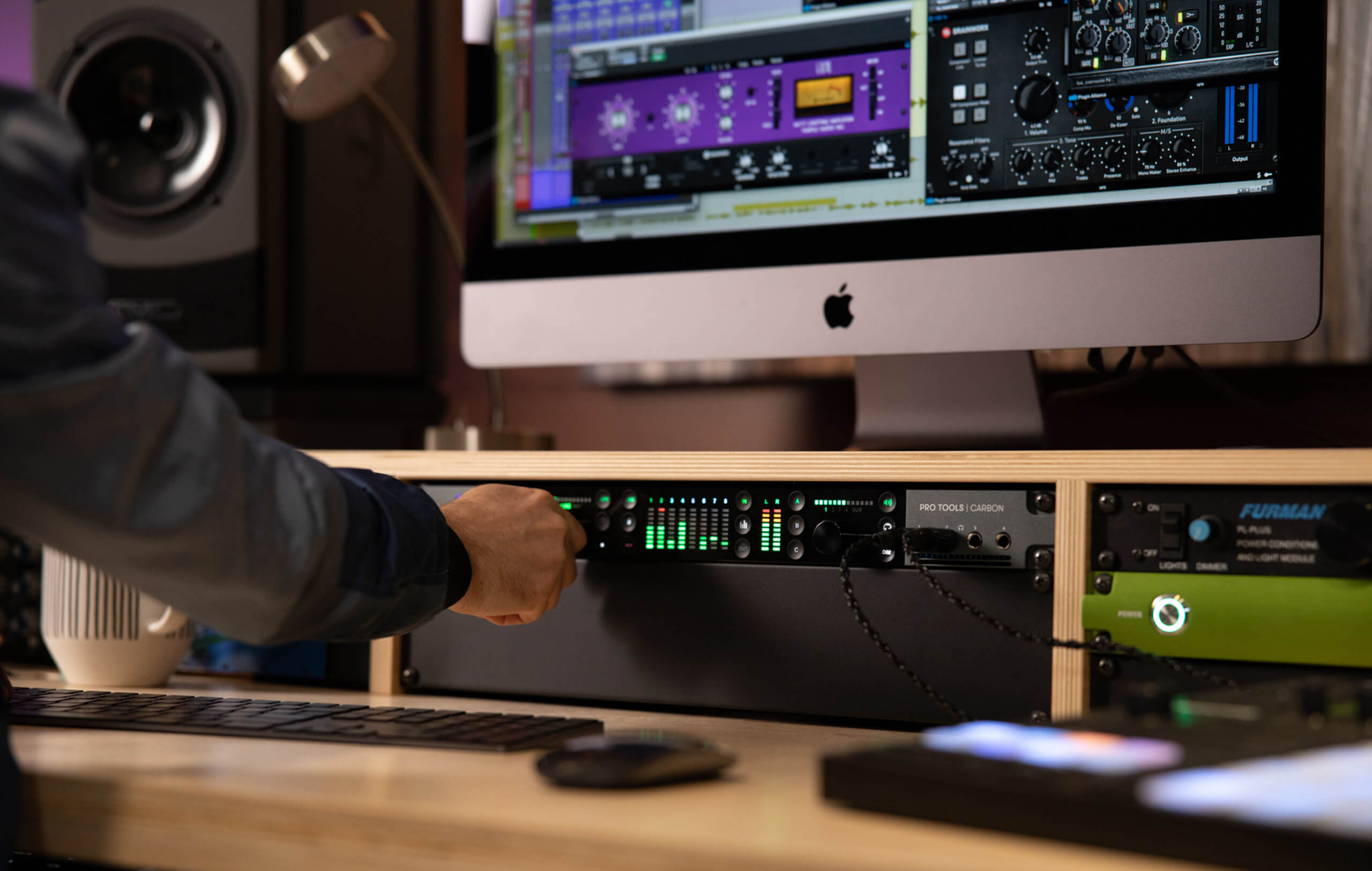 Carbon connects to a computer via AVB over Ethernet, either by direct connection or through approved adapters. There are eight onboard HDX processing chips, almost half the DSP found on a single Pro Tools HDX PCIe card. Avid notes that Carbon does not daisy-chain with other devices, but the presence of a second Ethernet port suggests this will probably change. Other Ethernet devices – such as the Avid S3 controller used for this review – should connect to the computer via a second network port or adapter.

Audio Video Bridging (AVB) is an open-source protocol, which Avid uses on their Venue live sound products, but it is also conveniently embedded in Mac OS. However, PC users will be disappointed as there’s no AVB support under Windows; only selected Apple hardware supports Carbon.

Carbon offers a Pro Tools-exclusive experience: other DAWs can access the hardware through CoreAudio and even share it while Pro Tools is running, but none of the advanced features are accessible to third-party software, making Carbon an extravagant choice for users of other DAWs.

Carbon requires Pro Tools 2020.11 or newer; this review used 2021.6, which worked flawlessly under Mac OS 10.15.7 on a Mac Pro 2013. At the time of writing, Avid reported some audio issues with Carbon and Big Sur on M1 Macs, which are currently under investigation.

Carbon’s similarity with Universal Audio Apollo x8p doesn’t go unnoticed. Perhaps Avid didn’t want to reinvent the wheel. Still, on both devices, rotary push-switch encoders and a cluster of preamp functions (+48V, phase, input toggle, stereo link) are located in near-identical positions. There are some notable differences: on Carbon, it is possible to push, hold and turn each knob to ‘scroll’ through options, while on Apollo, only push/toggle is allowed, making its operation a little cumbersome; headphone outputs tidily share digital volume level with stereo monitoring, instead of having analogue controls.

Carbon’s input stage is engineered for safe level handling: A/D converters are about 12dB less sensitive than the Apollo’s, which reduces the noise floor by about 10dB (for quieter performance overall). This lower sensitivity means there’s less chance of accidental clipping and no input pad is necessary. You can feed in a full scale +24dBu sine wave without distortion. Input impedance multi-selectors on mic inputs 5-8 as well as on both instrument inputs are handy sound colouring and filtering tools. They are especially handy for taming harshness on DI guitar and bass or impedance-matching ribbon mics.

Overall, Carbon’s analogue and digital performance is impeccable. Preamps and converters sound extremely good and are on par with similar devices in the same price bracket. You can manage up to three sets of stereo speakers and four sets of headphones levels directly from the front panel, including mute, dim and a built-in talkback mic. This gives it enough flexibility to be a true studio centrepiece or a semi-portable recording interface. Multichannel monitoring is currently not supported, but there is an unused ‘SUR’ (Surround) option on the front panel, suggesting that future implementation for Pro Tools Ultimate (necessary for multichannel operation) might be under development.

When it comes to recording, Carbon-powered Pro Tools is in a league of its own. That’s partly because of Avid’s new Hybrid Engine for the Pro Tools mixer (available for Carbon and Pro Tools HDX users). In contrast to previous engines, the mixer now runs natively on your computer (with up to 2048 tracks with Pro Tools 2021.6) and only record-enabled tracks switch to DSP. This means that only those tracks with audio actively being recorded benefit from super-low latency (for impeccable drop-ins) and AAX DSP plug-ins in the monitor path. Carbon has enough onboard DSP to manage a full tracking session using every available input with spare DSP for monitoring plug-ins. AAX DSP plug-ins seamlessly switch to their Native AAX version once recording is over.

Carbon’s front panel controls are all digital, but there is no provision for software mirroring of their functions that would display numerical readouts or store presets. Avid possibly rushed this product to market without fully developing all of its features, as Carbon’s lack of integration with Pro Tools’ very own Mic Preamps section seems to indicate. In this sense, UAD Apollo x8p sets a benchmark for digital integration (even more so using Universal Audio’s free Luna software), and considering Carbon’s higher price tag, pressure is on Avid to bridge the divide if they want to offer value for money.

Deal or no deal

Avid wants musicians and producers to join the Pro Tools community instead of other popular production platforms, and with Carbon, they have created the perfect environment for it. This is a dependable interface that delivers on quality and a serious contender for music professionals who need the performance of a DSP-based Pro Tools system without the hassle.

Although Carbon comes with a perpetual Pro Tools license, bundled Avid software and plug-ins are subscription-based, which will kick in 1 year after purchase. License upkeep can be a burden, and potential buyers should evaluate Carbon’s hidden costs before committing.