With one of the most democratic R&D processes we’ve ever seen,
Aston’s Element promises to be a true microphone of the people 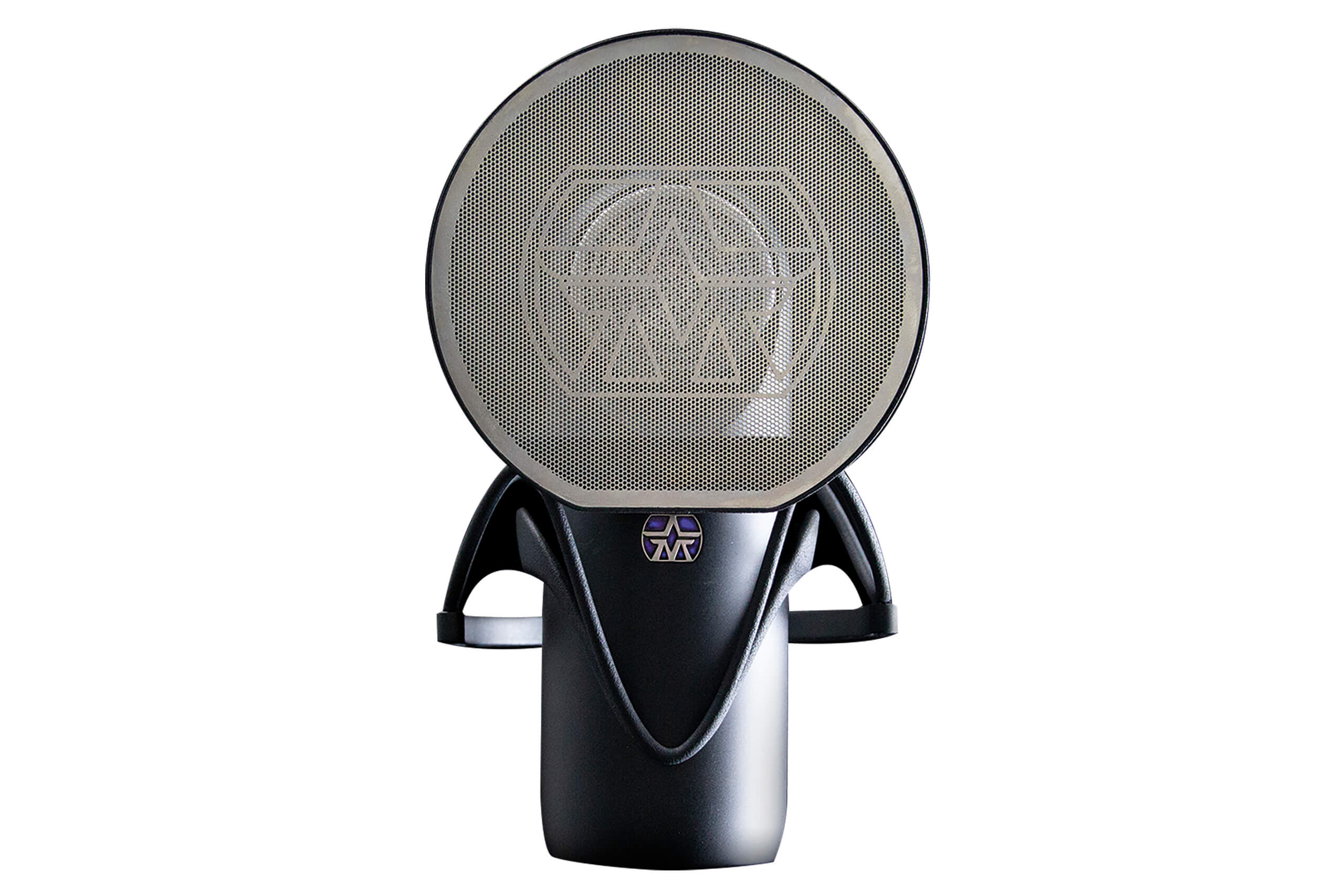 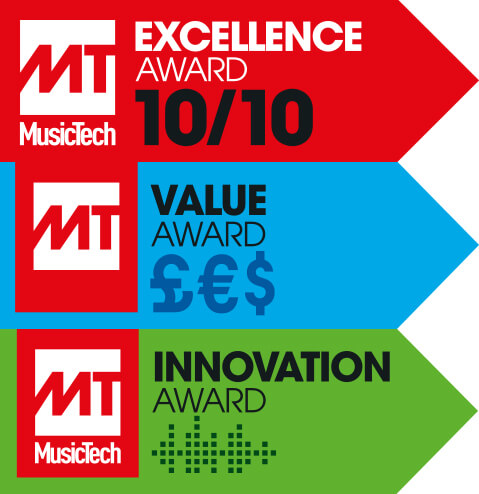 When is a condenser microphone not a condenser microphone? When it’s the latest inconceivably designed creation to spring forth from within Aston’s Hertfordshire-based headquarters. Element is a fixed-cardioid moving-coil design but, unlike standard dynamic microphones, the Element requires 48v phantom power. The mic’s low-cost high performance is the result of 18 months of development and deliberation by Aston head honcho James Young and chief designer Trevor Szynk in tandem with more than 4,000 customers invited to comment on the mic’s character.

Crest of the wave

Much new technology was developed in Element’s construction process, not least of
which is the groundbreaking capsule technology Aston calls Ridyon. The name is derived from the Element’s performance, said to offer the transient response of a ribbon along with the detail of a condenser and the punch of a dynamic.

It’s an unusual-looking mic, reminiscent of an electric shaver or, as others have remarked,
a showerhead. Importantly, the physical aspects of the mic play a crucial role in its performance, hence the waveguide at the base of the capsule.

Waveguides are a common feature of many modern monitors but this is the first mic we’ve encountered that harnesses this technology. When you consider how a monitor’s waveguide assists audio coming out of a speaker, it follows that it should effectively guide audio into a mic. After all, both are transducers – they just operate in the opposite way from each other.

The mic comes with its own bespoke pop filter and shockmount. The funky pop filter is a magnetic design, which attaches to the mic’s body in an incredibly satisfying way. It can even be attached upside down, away from the capsule, when not required. There are no user-adjustable controls but, as most mic preamps feature high-pass filters and attenuation pads, this shouldn’t be a problem and, of course, it helps keep the price down. You do get a cool backlit LED logo that glows purple to show that phantom power has been engaged though. 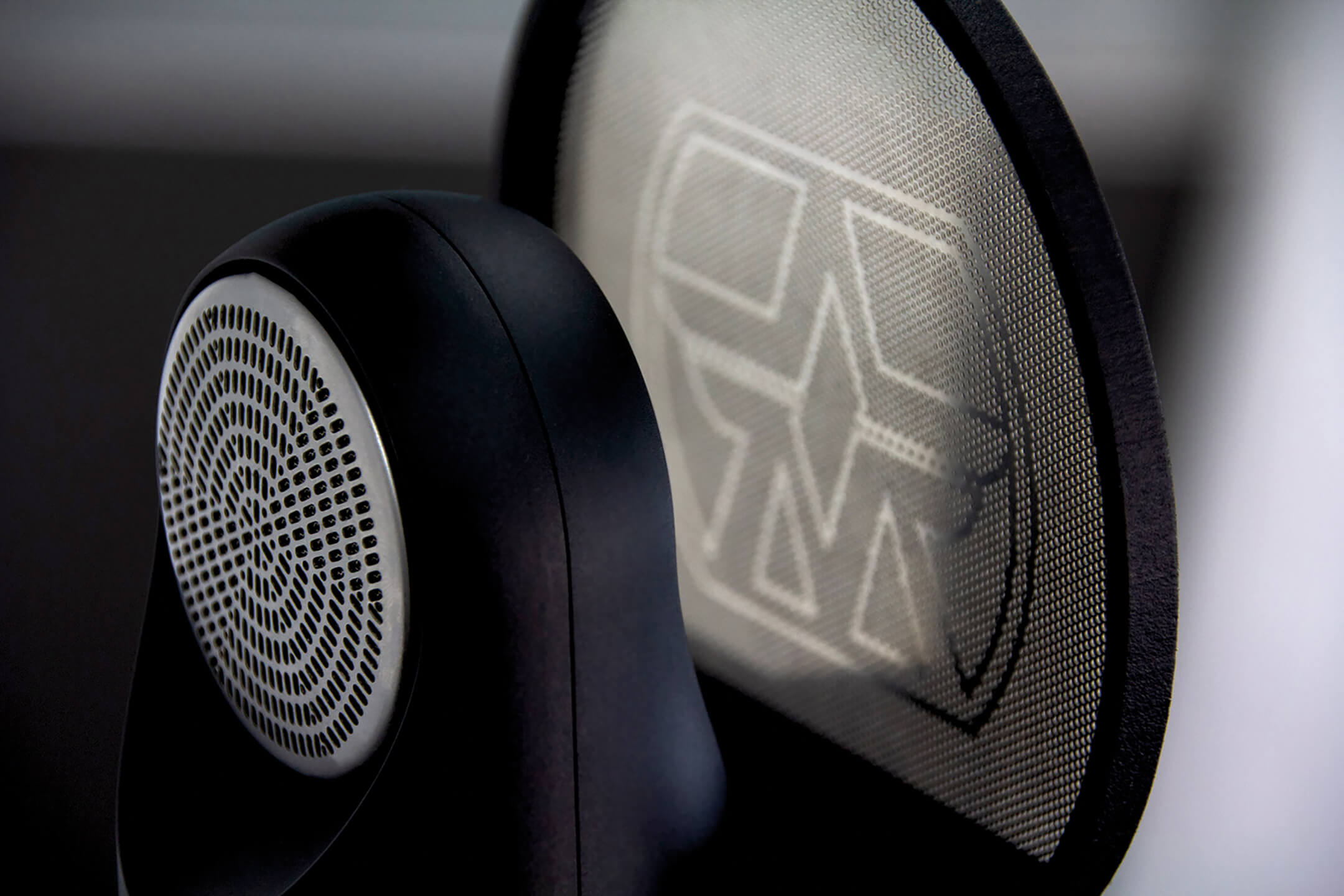 The people have spoken

Aside from the innovative design of the Element’s capsule and chassis, the story behind the microphone’s sonic development and final voicing is equally remarkable. Across its 18 months or so of development, there was a research and design period of 15 months, during which the Ridyon capsule and its acoustic housing were perfected, while the chassis, grille diffuser and accessories were prototyped. What followed was an unprecedented three-month peer-reviewed public blind-listening test period, during which more than 4,000 Aston customers auditioned audio files of recordings made with early versions of the Element alongside mics from some of Aston’s competitors – including AKG, Audio Technica, Blue, Neumann and Rode – and ranked them in order of preference. Taking customers’ opinions on board, Aston fine-tuned the sonic character of Element until it emerged at the top of all the side-by-side shootouts. This is the version we have before us, for the world’s first review of this astonishing mic.

Plugging the Element into our ultra-clean LEV Solutions mic preamplifier and dialling up the wick confirms that this is an extremely quiet microphone in operation; the noise floor is practically non-existent. We were impressed with how the cooling system on the recently reviewed Golden Age GA-800G valve mic reduced noise, making it possibly the quietest valve mic on the market. But there’s the rub: the proviso there is “quiet for a valve mic”. The Element is practically silent in operation even when fed huge amounts of (clean) gain. This is without a doubt the most noise-free microphone we’ve ever tested, and that covers a wide spectrum. 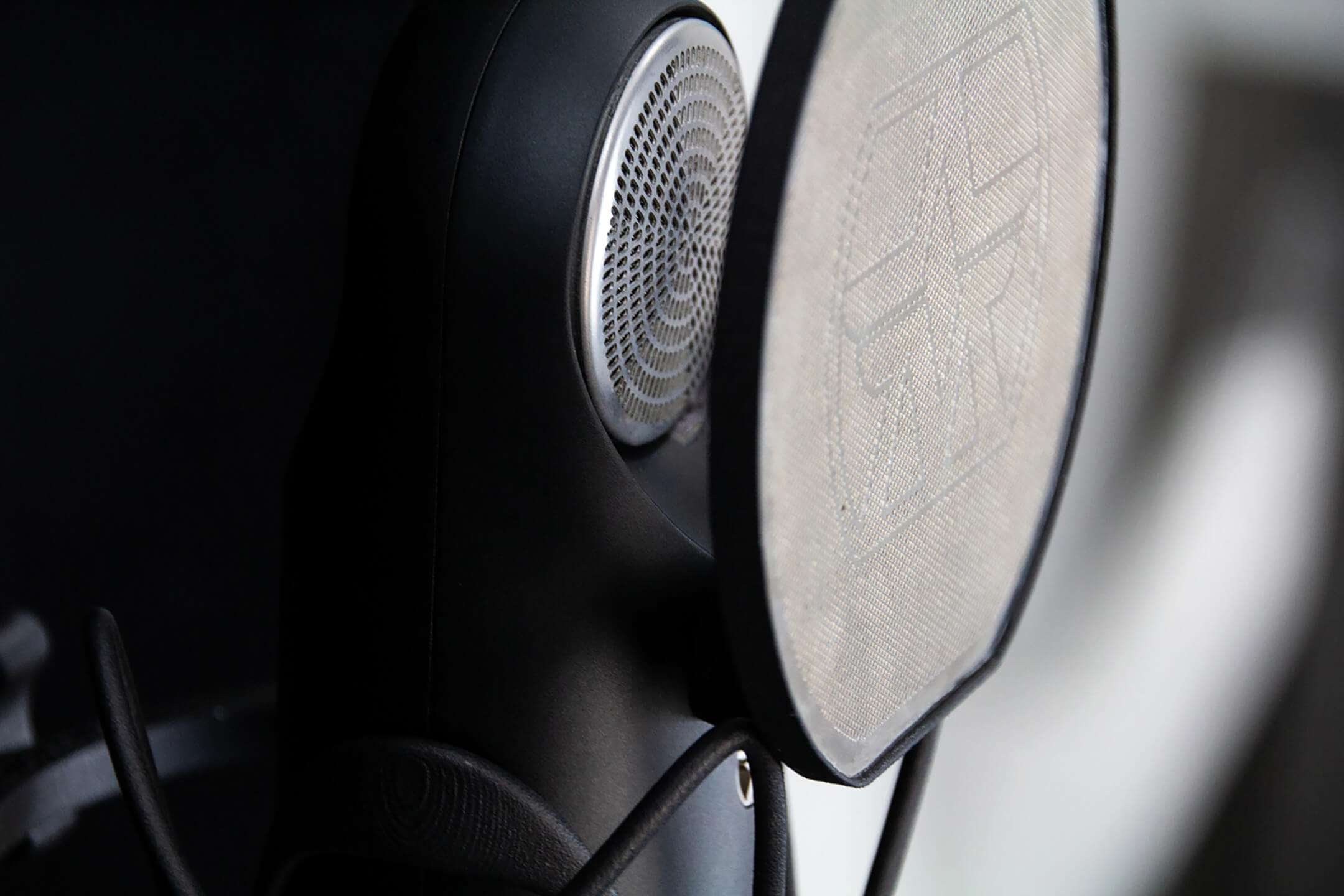 The Element arrived just as we were about to record some vocals in the band’s own studio, this writer’s regular review studio Invada having been block-booked for a lengthy socially distanced mixing session. Without Invada’s arsenal of vintage AKG and Neumann mics to hand we set up the Element alongside the band’s own Aston Spirit and the aforementioned GA-800G we’d been warming up for the session.

While both condenser mics sound wonderful in their own way, the presence and punch of the Element suited our vocalist brilliantly. Sure, it doesn’t have the velvety smooth and creamy midrange of the valve mic but the powerful and gutsy low-mids and clean upper registers of the Element compliment his singing style better, so the G-800G was powered down.

This is without a doubt the most noise-free mic we’ve ever tested, and that covers a wide spectrum

One aspect of the Aston Element’s performance that was immediately clear to everyone in the room is it’s gorgeous proximity-effect character, which adds unmistakable warmth when used up close.

It was noted during the side-by-side test that, while the £3,600 valve mic’s sound is more expansive (as well as being more expensive) than the Element’s, the more affordable Aston has a tighter focus. The rejection of unwanted ambience will prove particularly useful when recording vocals or any instrument that needs to be captured purely with no extraneous room sound. No doubt the waveguide helps in this respect, as it welcomes the direct dry sound while ignoring spurious surrounding sound. This waveguide, then, is merely one example of something that the dilligent Aston customers were right about. 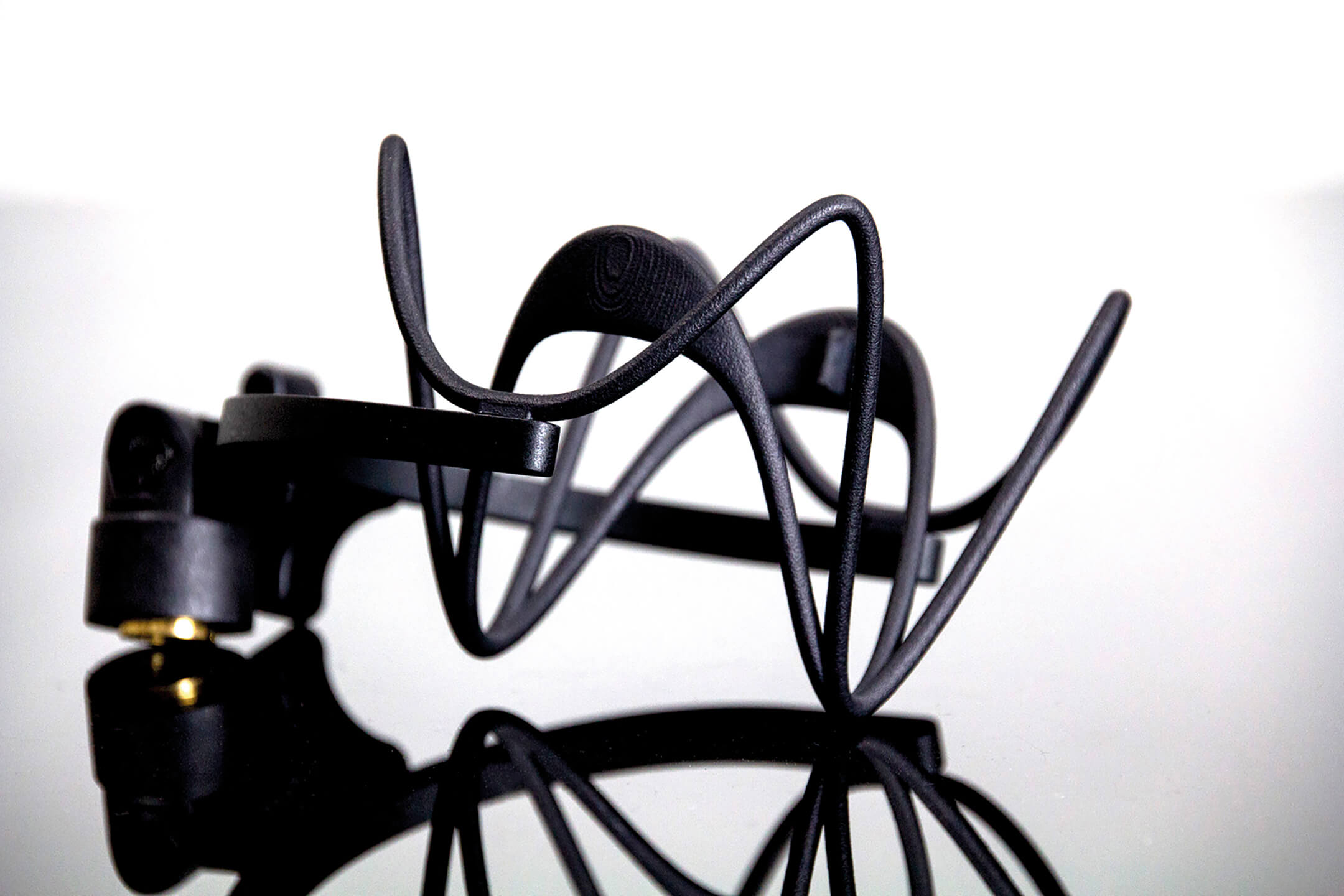 This concentrated approach of tightly capturing audio directly in front of the mic is also excellent for minimising spillage from other instruments when recording live backing tracks with many loud instruments. With regards to multi-mic’ing drum kits, the Element sounds both fat and fast as a spot mic on top of the snare drum, providing a weightier character than a Shure SM57. Instinctively, we move the mic to the floor tom and here the synergy is superb too. The Beyer M88 is often our favoured floor-tom mic but the Element’s robust yet open nature is unbeatable in this application. This is our newly crowned microphone of choice for floor toms.
Placing the Element in front of an acoustic guitar in our go-to position of about eight inches from the 12th fret again highlights the full-bodied nature of the mic with a little upper-bass boom. This is soon sorted by employing the high-pass filter on our valve Freebird equaliser and a touch of low-end shelf cut. Boosting at 15kHz adds a wonderful halo of air and shows clearly how the Element’s clean and extended top end responds beautifully to extreme high-end enhancement.

Throughout this review period, we are consistently impressed with the Element’s performance on a variety of audio sources. Its wideband full-range sound means it can be employed for almost any task. It’s totally free from the unwanted honks and whistles that often plague cheap condenser mics too and, though the Element isn’t strictly a condenser design itself, it’s this kind of mic that Aston is aiming to compete with. Other dynamic mics at this price point don’t come close to the Element’s performance. Shure’s popular SM7B is possibly the closest in character but it’s more than twice the price and lacks the Element’s extreme top extension.

While other microphones may offer a more seductive sound across the frequency range, presenting a rose-tinted view of the source material, the Element takes a no-nonsense approach, providing a robust low-end foundation from which higher frequencies can soar. The broad midrange is as pure as many expensive condenser mics and, compared with Aston’s rounder-sounding Spirit, for example, it packs a firmer punch. Expensive boutique-brand microphones will always have their place in professional audio but, at this level, the Element is a gamechanger. It’s the first giant-killer of the new decade. 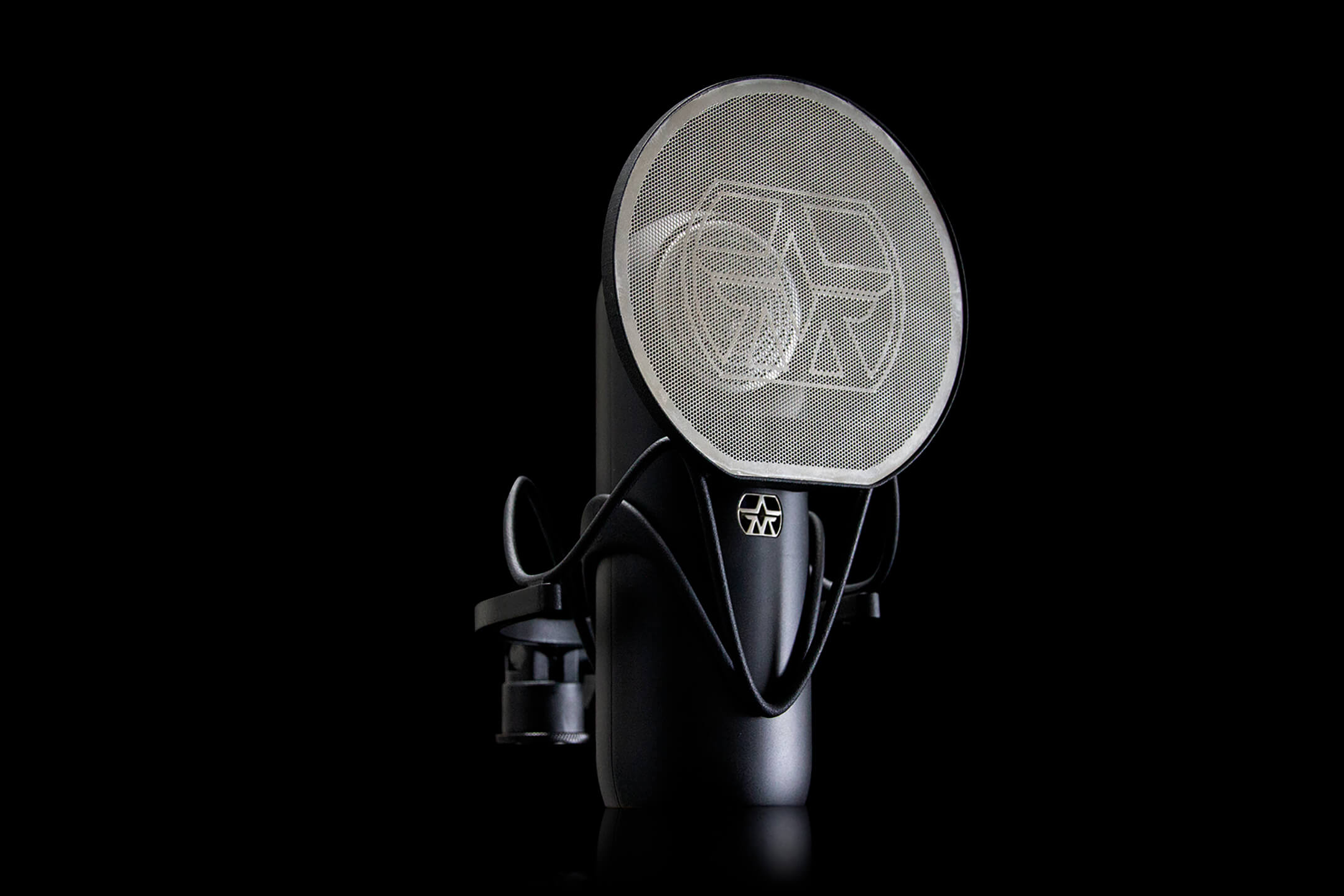 If you only ever own one microphone, it’s important that it’s able to cover all or at least most of your recording requirements. Some electronica producers might only need a mic for recording vocals and therefore opt for a condenser type. But the Element excels as a vocal mic and easily outperforms most similarly priced condensers. But this mic is a true all-rounder too. It has the delicacy and detail of a condenser along with the high sound-pressure level handling capabilities of a rugged dynamic design, all of which means you can use it close to loud electric guitar amplifiers and drum kits, as well as softer instruments.
It’s firm low-end brings out the best in tom and if you don’t have a kick-drum mic, the Element can deal with that too. A mic for all seasons, then, or as the company says, the world’s first ‘People’s Microphone’.

Coming top in our recent small-diaphragm condenser shootout, the SE8 offers Class A circuitry along with two levels of attenuation padding and two low-cut filters at 80Hz
or 160Hz.