Want to add a touch of authentic class to your vocal recordings? This offering from Telefunken promises high-spec performance for a realistic price 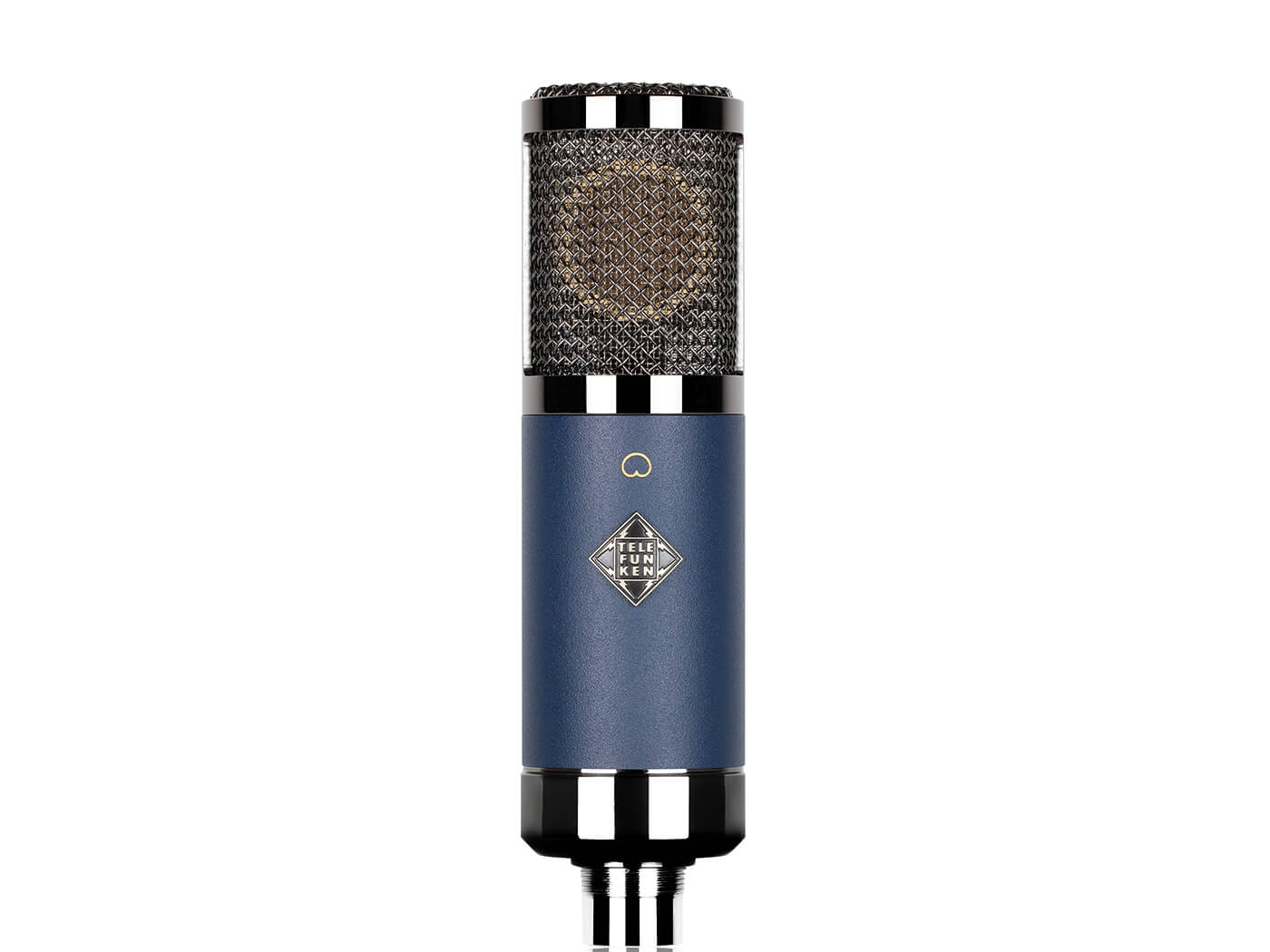 There are some audio companies whose names have become so inextricably linked with high-quality audio that they can be considered the sound of the music we’ve loved throughout our lives. Think Neve, SSL, Moog, Teletronix, Neumann and AKG – and don’t forget to add Telefunken to that list.

Born of a joint venture between Siemens & Halske and AEG in 1903, Telefunken spent the
first half of the 20th century developing audio resources for the German military. But later, in collaboration with Neumann and AKG, the brand played a significant role in the development of two of the most coveted microphones of all time: the U47 (which featured a Telefunken VF 14 M vacuum tube) and the ELA M 250, which had the AC701K vacuum tube.

More microphones were developed until the original Telefunken company ceased trading in the mid-1980s. Classic microphones tend not to go out of fashion but they do require new parts and maintenance. In 2000, the Telefunken brand was resurrected, this time under US ownership, initially to provide replacement parts for the ELA M 251. This, in turn, led to a ground-up rebuild of the microphone, which was released in 2002 to critical acclaim. 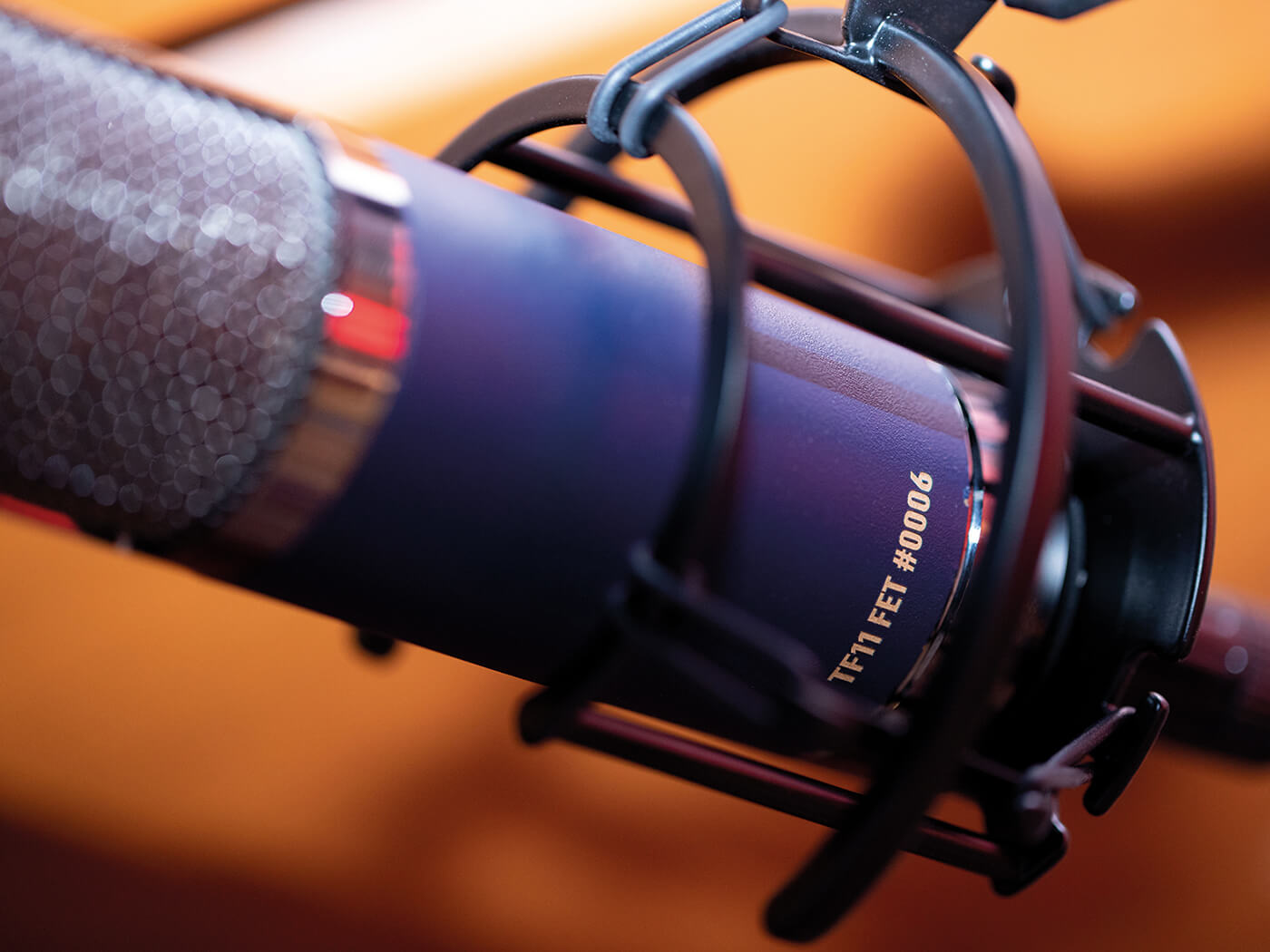 Faithful recreations of the U47 and C12 models followed and, while the current versions of these microphones remain beyond the financial reach of most mortals, the Telefunken brand is alive and kicking once more. Alongside classic microphone recreations, however, Telefunken has unleashed a ‘new’ mic series, titled Alchemy.

Using many of the components of the higher-end microphones but at a more accessible price point for those who still take their recordings seriously, the Alchemy range is really causing a stir. Here, we’re reviewing the latest addition to the family, the TF11 FET. Retailing for less than £1,000, this is the most cost-effective way to add Telefunken’s classic cardioid condenser character to your projects.

Assembled by hand in the US, the TF11 features a fixed cardioid pattern within a FET-style design. Its edge-terminated capsule is in the style of the CK12’s, and it boasts a Class A discrete JFET amplifier, as well as a custom UK-made output transformer by OEP/Carnhill. In the package, you’ll find the microphone in its own box (and with its own bag), as well as two microphone stand attachment options – one a more basic clip through which you can connect an XLR cable, and the second a more substantial shock-mount option. Like the rest of the Alchemy series, the business end has a clean metal grille and the body has a brushed metallic finish. Each member of this series is finished in its own colour, with the TF11 boasting a deep and aesthetically pleasing blue.

So how does all of this translate to the TF11’s sound? With vocals, the sound is immediately warm, open and engaging. There’s a high level of detail in the mic’s performance, including at wide dynamic levels. This is a mic that won’t mind whether you’re a loud and aggressive performer or a softer and more soulful one. The midrange is pleasingly rounded without getting too lumpy. But without question, the most notable characteristic of the TF11 is its fabulous bright(ish) top end. While the sibilance isn’t over-enhanced, there’s plenty of treble in this microphone, making for a high-definition sound that will cut through mixes without much additional processing. Allied to a complementary channel strip for tracking or carefully chosen post-recording processors, you can achieve the kind of open and sheen-heavy vocal sounds associated
with pop and dance music vocals.

However, this isn’t a microphone that aims for cheap treble-heavy thrills. Nothing is exaggerated or artificial in that frequency area. But this is certainly a mic that is willing to provide all of the air and sparkle you might require. It’s testament to the TF11
that its qualities shine in different ways on different sound sources.

Placed in front of a guitar cabinet, you’ll still get all of that definition but with a rich and full midrange

Placed in front of a guitar cabinet, you’ll still get all of that definition but with
a satisfyingly rich and full midrange tone. One of the TF11’s headline features is its fast transient response and, while this comes to the fore most immediately on drums, it’s sensational when used on rhythm guitar and picked electric guitar tones too, with the plucky high-end of those initial transients melting beautifully into the warm and smoother midrange.

The same can be said of the mic’s performance on acoustic guitar. Much depends on how close you position the microphone to the instrument’s sound hole, as always, but it’s perfectly possible to strike a lovely sound that balances string noise and body noise, with the cardioid pattern both wide enough and selective enough to capture a sensational-sounding result. Pleasingly, there’s plenty of separation in the low midrange too, meaning things don’t necessarily get lumpy around a clustered group in this most important
of frequency ranges. 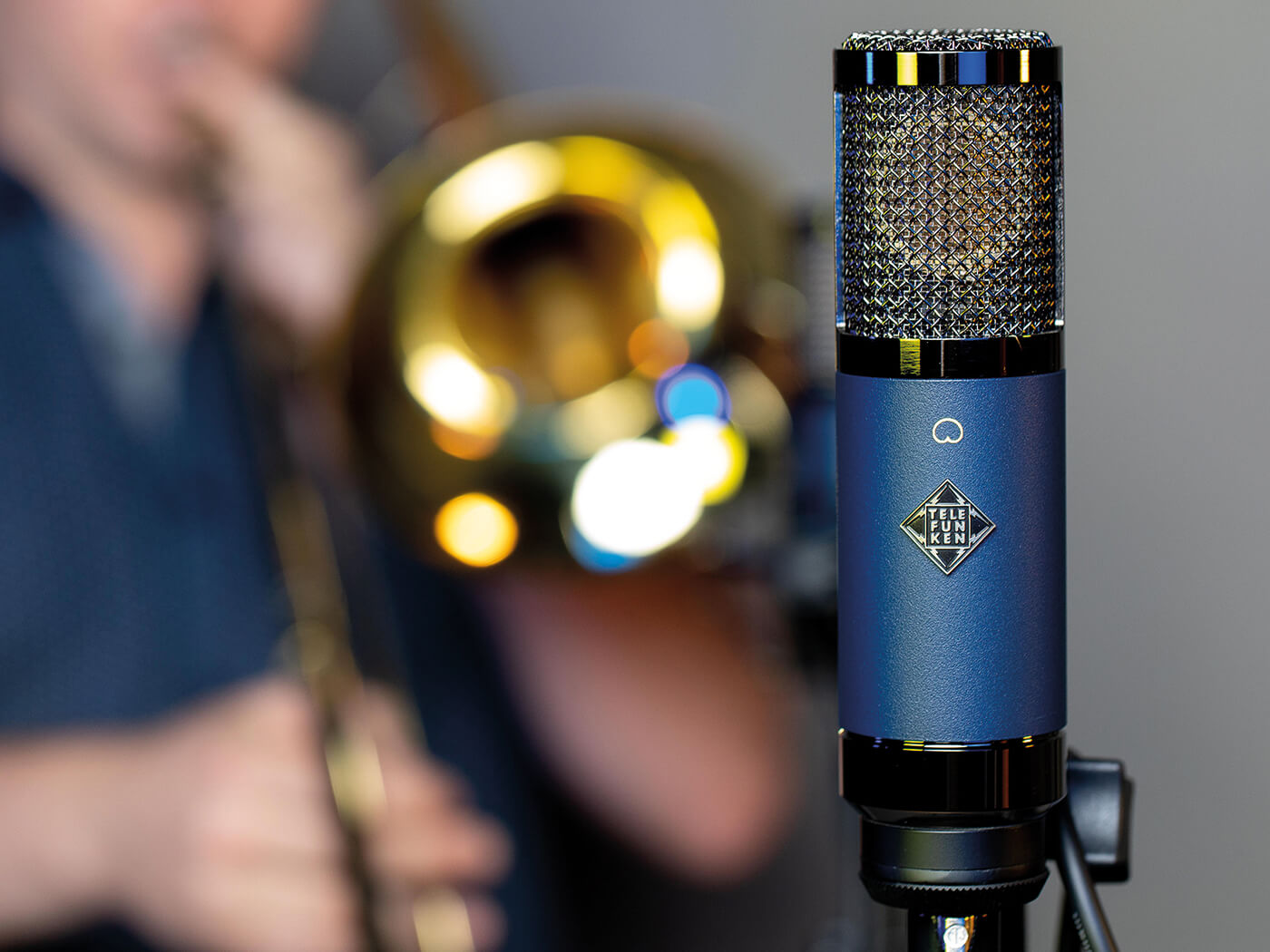 All of the above bodes well for the TF11 as a drum microphone. We were only able to test one mic in this review, so we didn’t have the opportunity to run stereo tests with overheads but, even when used as a mono sound source, the performance of a single TF11 is impressive directly above a kit. You won’t struggle to find high-quality audio examples online of dual TF11s working on a kit either, using either the Glyn Johns method – whereby one mic is used as an overhead above the snare drum and a second is pointed at 90 degrees towards and across the kit from the floor tom position – or as a stereo pair with both microphones above the playing position. The TF11, then, something of an all-rounder in the studio.

There’s no shortage of competition around the TF11’s price range though, and just because the TF11 is perhaps the most affordable Telefunken microphone within the Alchemy range doesn’t make it cheap or even financially attainable for many. But be in no doubt, the Telefunken stamp is all over the sound of the recordings this mic makes – and with that comes a history all of its own.

What might be a deal-breaker for some is that the TF11 is limited to only a cardioid pattern. Several of the other FET-style mics around this price have broader all-round potential thanks to multiple polar patterns. Equally, if your budget stretches further still and you’re looking for yet more Telefunken character, remember that the TF11 mic is effectively the baby of the Alchemy range and that yet more detail and quality is available at correspondingly higher prices beyond this introductory model.

However, none of these considerations are raised to denigrate the TF11. This mic offers a level of quality that’s entirely in line with its retail price and that makes recording a wide range of sources genuinely joyous. 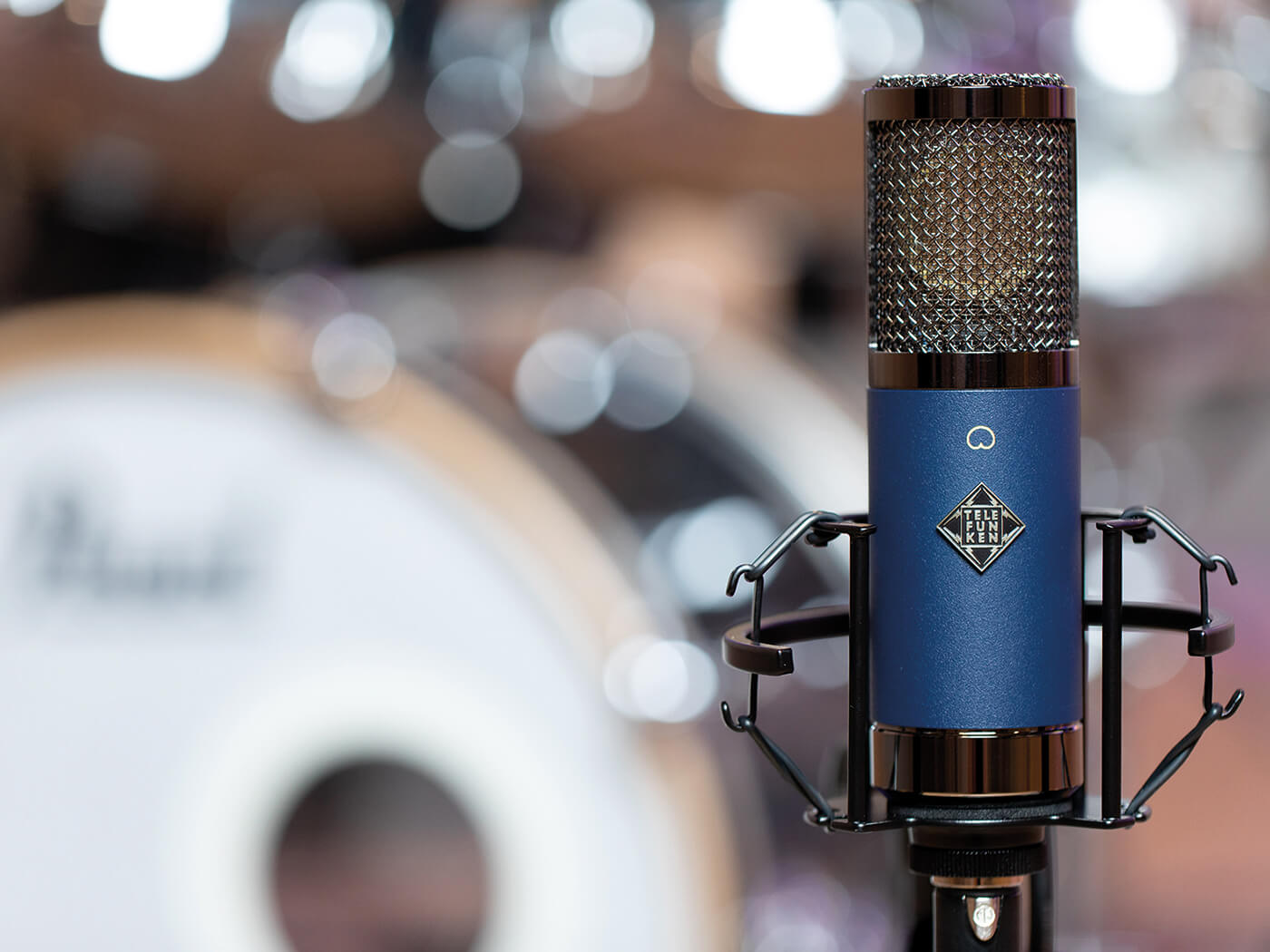 There’s a lot going for this mic. It’s the cheapest Telefunken large-diaphragm condenser ever. It does a great job on a wide range of sound sources. It’s detailed, open and clear, and while it’s brighter high end will dissuade some, it will attract many others. Competition in this price range is fierce but if you love the Telefunken character, this is an effective way to add it to your recording options.

Warm Audio’s original recreation of the U87 flew from the shelves and its Revision 2
model sounds even closer to the original. For vocal recordings, in particular, it’s won many admirers.

The man behind Mojave Audio is David Royer, perhaps known most for his ribbon microphones. One considerable advantage that the 301 FET has over the TF11 is its multi-pattern functionality.