Computer-based amp and effects processing is flexible but difficult to incorporate into live guitar rigs. Teisco looks to change that. 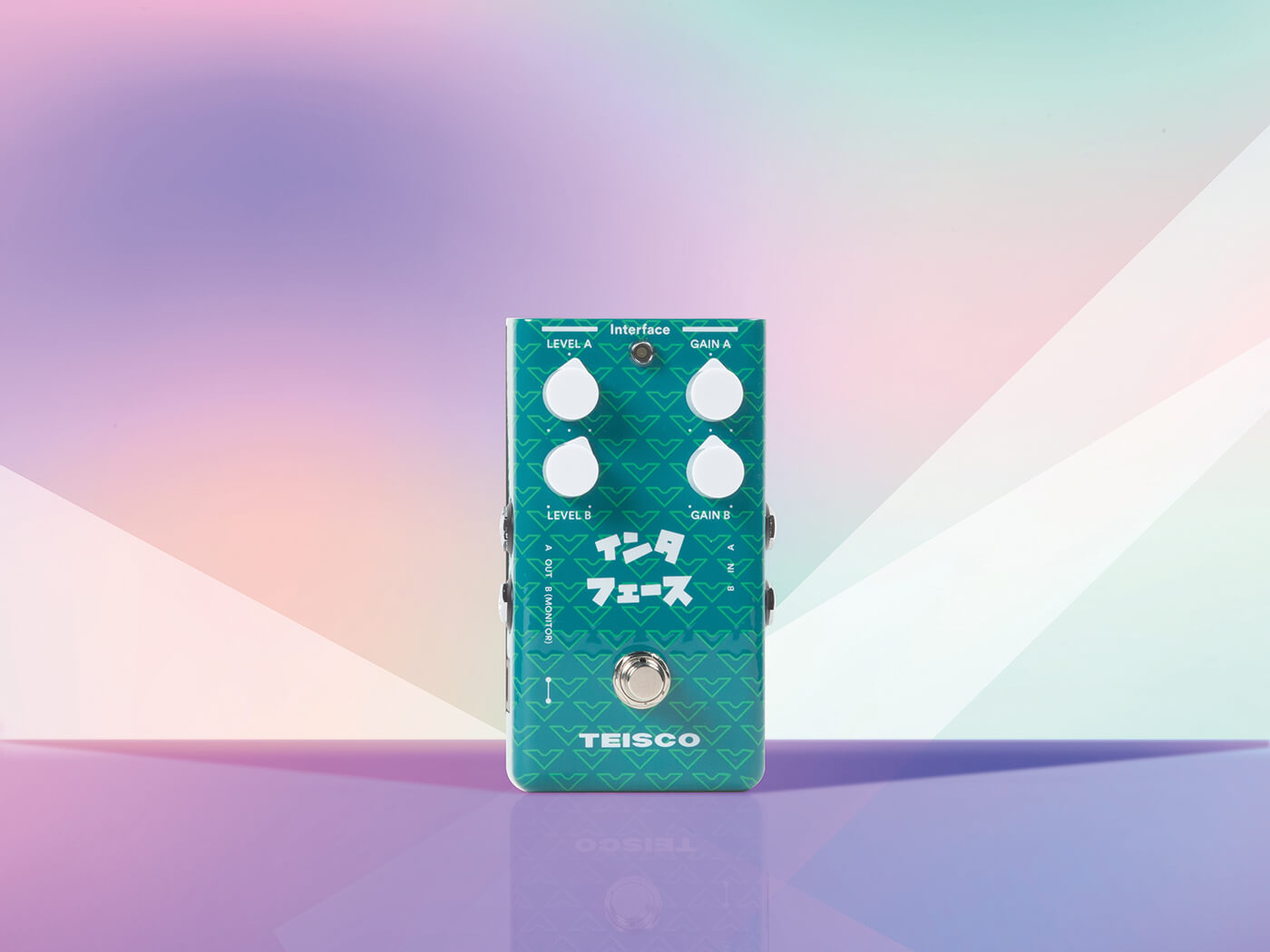 Using computer-based guitar effects processing is common in studios but less common in live guitar rigs. One reason for this is that guitarists tend to prefer simple signal flows, with their guitar at one end and an amplifier at the other, and perhaps a stompbox or two (or three) in between to add some extra character. Delays and reverbs, which are typically applied after pre-amplification and overdrive, are often built into guitar amps, while more adventurous guitarists may use their amp’s effects loop to insert external processors that provide such effects.

But it isn’t easy or straightforward to fit all-singing, all-dancing computer-based guitar processing into such a signal chain, not least because computer audio interfaces, which generally have instrument input connectors, don’t tend to output instrument-level signals that can be plumbed directly into a guitar amp. You can remedy this with the addition of a reamplification box, but this just adds another stage of complexity to your rig, and leaves you with problems such as how to bypass the computer-bound part of the chain when it isn’t needed, and how to get the right effects into the right part of the effects chain (ie pre or post overdrive). Enter Teisco with a new solution to all of this in the form of the recently released Interface Pedal. 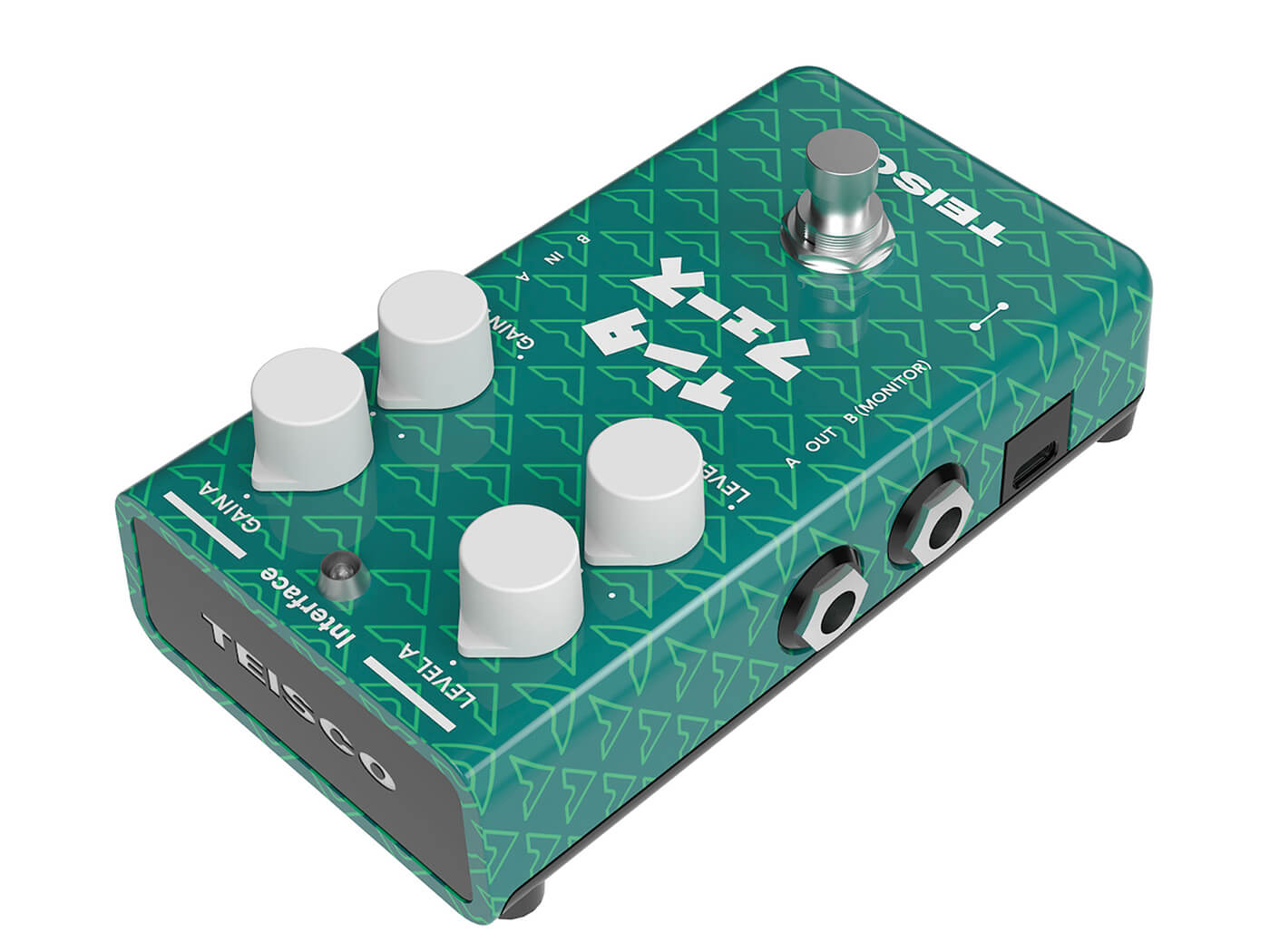 In essence, the Interface is a two-in, two-out USB audio interface for macOS, Windows, iOS, iPadOS and Android, packaged in a stompbox enclosure that matches the styling and design aesthetic of Teisco’s conventional guitar effects pedals. In normal use – that is, used as part of a typical guitar-stompbox-amp signal chain – the inputs and outputs operate at instrument level, and so can take inputs from guitars, basses and other stompboxes or an amp’s effects loop, and can be fed to more stompboxes or to an amp’s input or effects loop return.

When the Interface is disabled, signals pass straight through, input to output. When enabled via its chunky footswitch, the Interface essentially inserts your computer into the processing chain, applying any effects that you have running there before passing the signal back out to the rest of your guitar effects chain. An added bonus of passing your guitar signal through your computer is that you can easily record your performances, should you wish to.

Being two channel, the Interface can operate in a dual mono mode, providing independent inputs for two guitars and outputs for two amplifiers, and plumbing these I/O channels through two mono channels in your DAW (or other plug-in host) allows you to add independent effects chains to both.

But this is just one of various hookup possibilities: if your computer is generating stereo guitar effects, and you have two matched amps, the Interface will happily drive both as a stereo pair; or, if you are using a stereo processor in your chain prior to the Interface Pedal, the unit’s two inputs can operate as a stereo input pair too. Alternatively, the second output can auto-switch its level and mode to drive stereo headphones – ideal for practicing at home – or to send a stereo line level signal to a mixer or PA.

The most elaborate hookup option lets you use each channel at different points in your guitar signal path – one channel inserted in your pre-amplifier stompbox chain and the other inserted into your amp’s effects loop. This does introduce a double dose of I/O and processing latency, though, so you’ll need to use a small buffer and a computer capable of handling it if you want to avoid noticeable signal delays. Also, this hookup method means the effects loop is only running in mono, and so it does rely on your amp having a mono effects loop or one that can switch to a mono mode, otherwise half of the signal level will be lost. 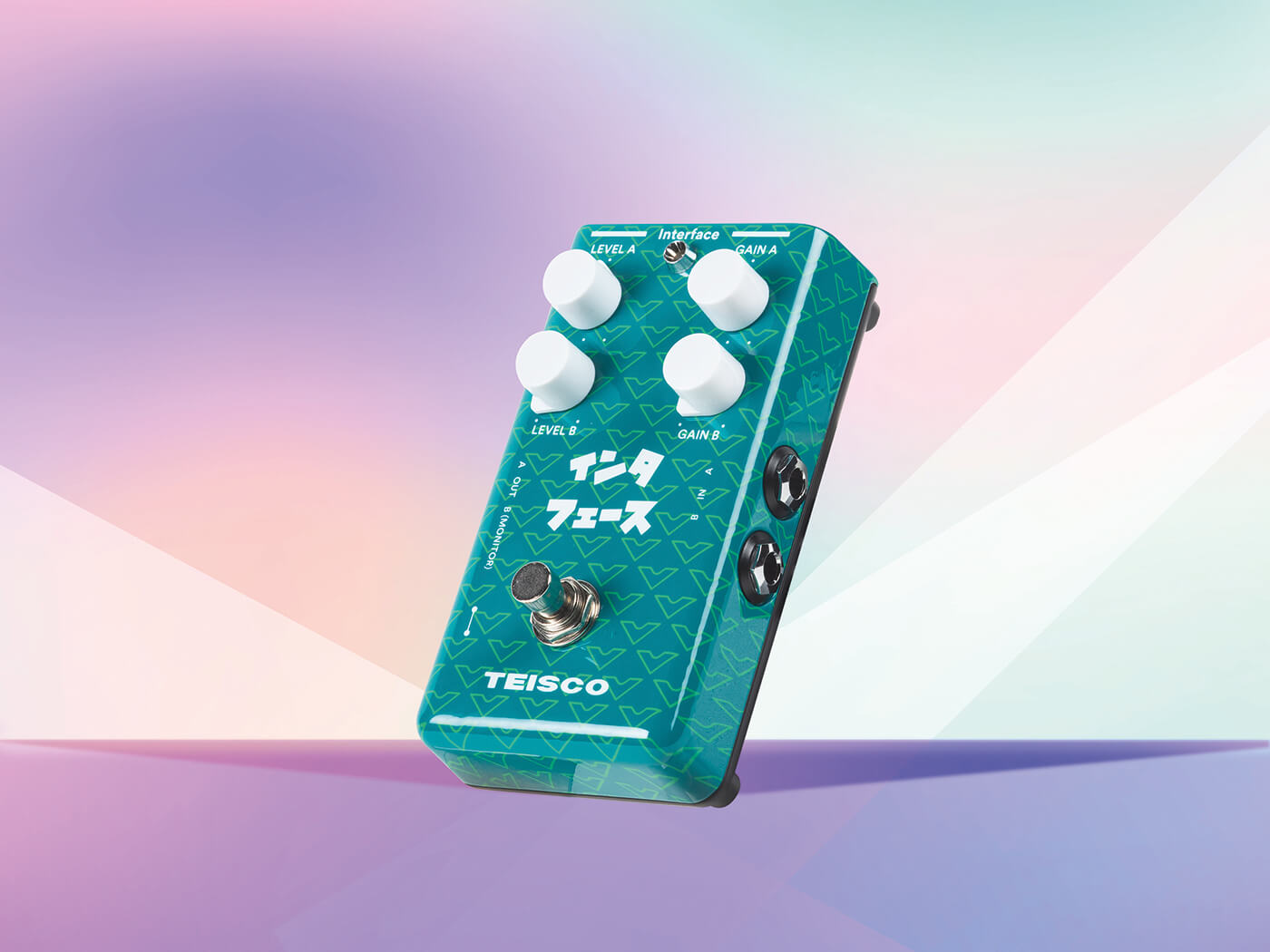 The concept Teisco has embodied here will appeal to many guitarists. The Interface Pedal grants that much-sought connection with computer-based effects processors and allows them to be slotted into existing guitar effects chains with ease. Better still is that it works like any other stompbox: one stomp to switch it on, another to bypass it, and a set of four knobs to control the signal input and output levels.

What’s not so simple, though, is that when used on a Mac, the Interface Pedal presents its input channels as one CoreAudio device and its output channels as another. We tested with Cubase and Pro Tools, and neither could cope with this split driver, and so we had to create our own aggregate driver that combined the two. If you’re familiar with macOS’s Audio MIDI Setup Utility, you’ll know that this is easy enough (if you know what you’re doing). This issue is only apparent in Cubase and Pro Tools, however; in GarageBand and Logic, everything works instantly.

Another confusing aspect is that the inputs and output connectors are labelled A and B, and are positioned on opposing sides of the unit so that the input labelled A is opposite the output labelled A, etc. This is what you would expect with a stompbox, because the inputs and outputs are visually and physically aligned. However, from the driver’s point of view, the inputs and outputs are labelled left and right, and that labelling corresponds to the positioning of the sockets when you look at them head on. In other words, input A is the right channel, while output A is the left channel, so they don’t actually feed through directly at all. This is confusing, although the manual does provide accurate routing instructions for different setup scenarios.

These criticisms aside, when used inline between guitar and amp or in the amp’s effects loop, Teisco’s Interface Pedal can make a huge amount of sense. Its ability to insert the chameleon-like amp modelling and tone-shaping capabilities of programs such as Native Instruments’ Guitar Rig and IK Multimedia’s AmpliTube into your regular guitar processing chain is a godsend. This introduces a tonal flexibility that is simply dizzying, and allows for a near-perfect fusion between the power of digital guitar processing, the flexibility of software plug-ins and the sound of valve-driven guitar amps using big speakers to shift great dollops of guitar-infused air. 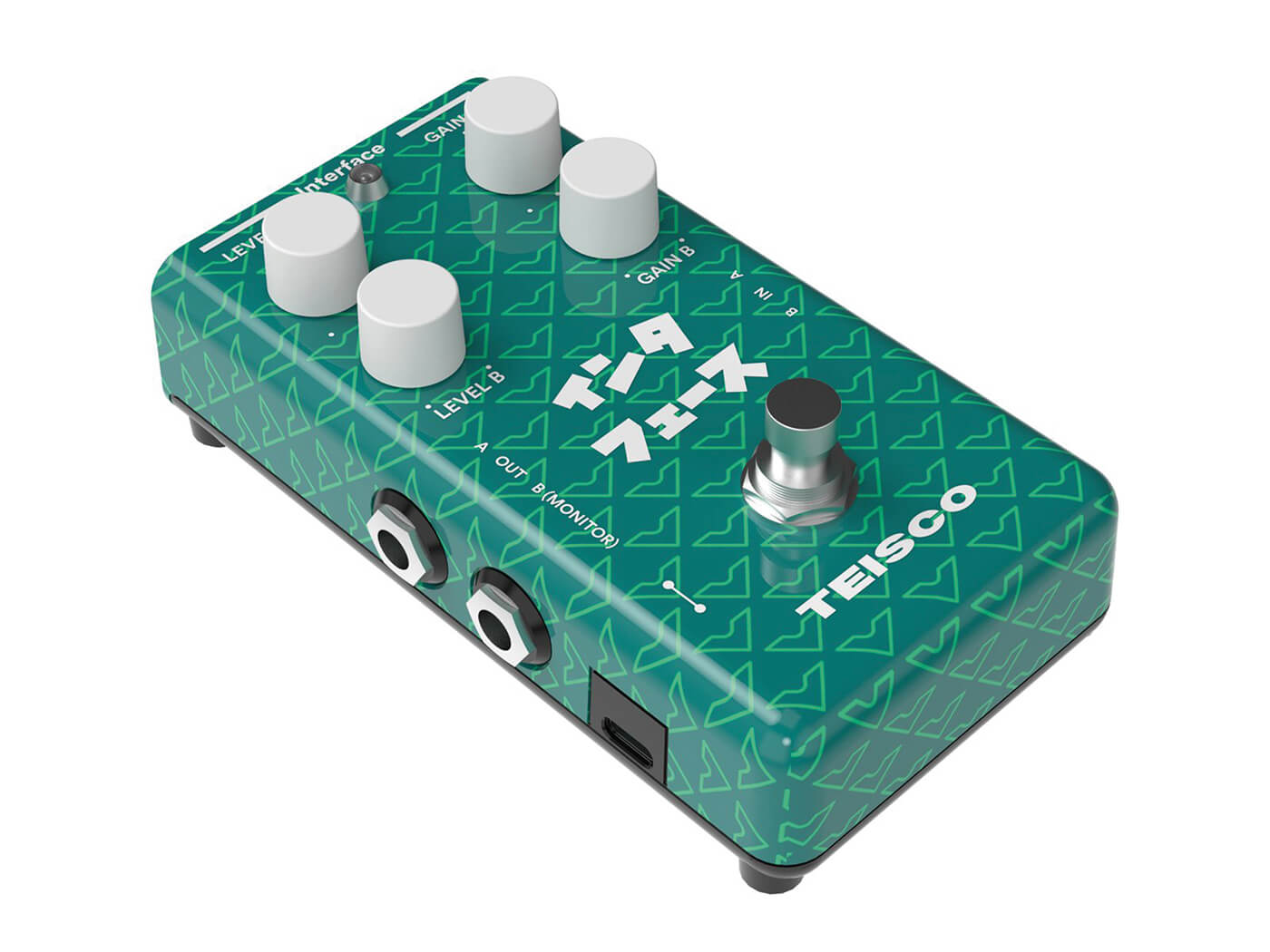 Teisco’s Interface Pedal is geared entirely towards use in the live performance rigs of guitar and bass players. Such a rig could be used in the studio but here it makes most sense to us thee Interface as you would any other stomp box, so that it’s part and parcel of the rig and nothing to do with the recording DAW and its host computer. It is possible to use the Interface as a recording interface but it’s not a good match for such work, so you may wish to look elsewhere if that’s what you’re looking for. But if you’re a guitarist or bassist who wants to add the flexibility of computer-based effects processing to your live rig then you’ll find little else that will do it as well as the Interface. 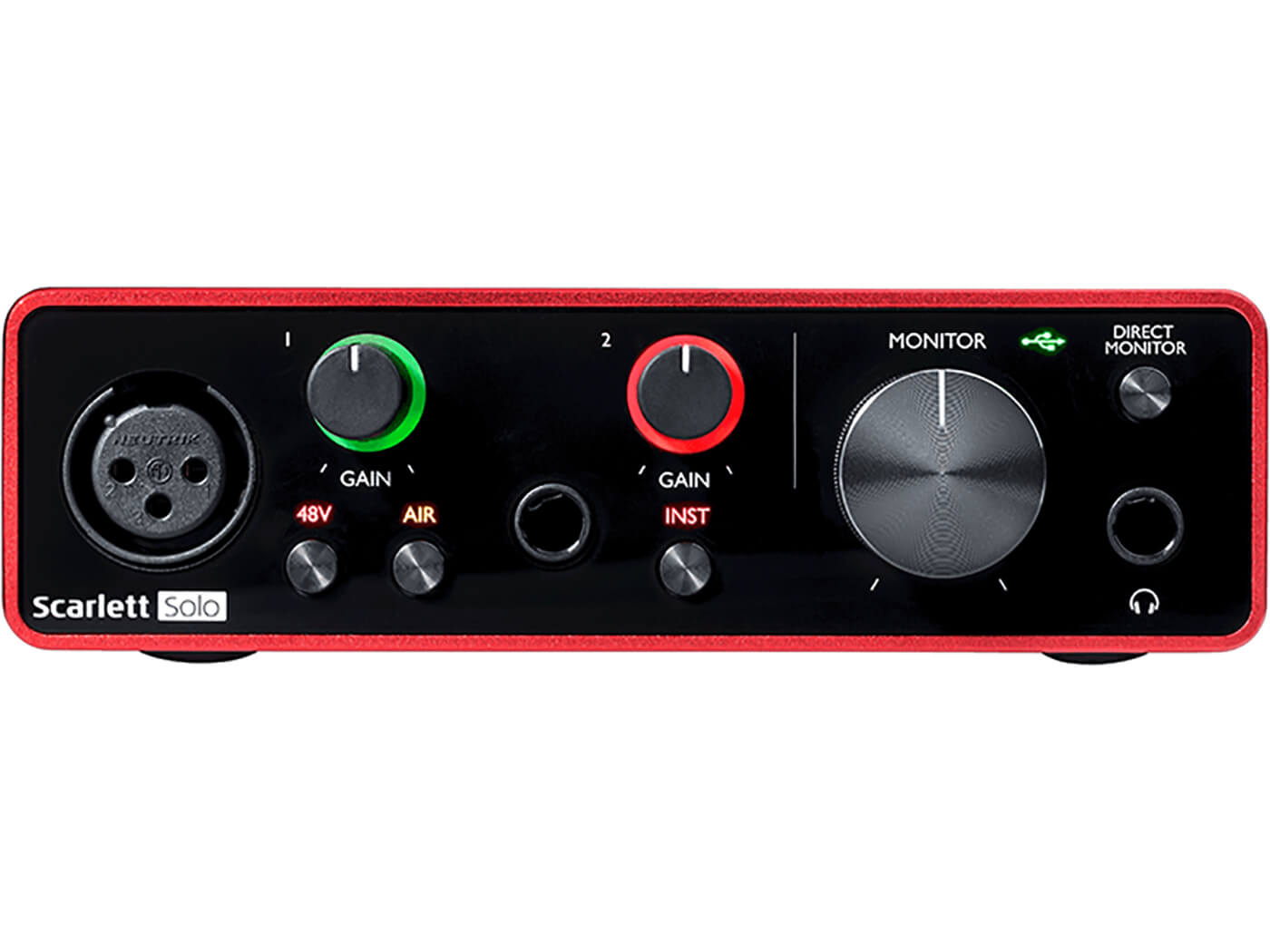 The Focusrite Solo is a great audio interface for guitarists and bassists who want to get their instrument sound into their computer. It provides an instrument input and a mic input featuring Focusrite’s acclaimed Scarlett mic preamp technology. The stereo outputs are ideal for hooking up to a studio monitoring system. 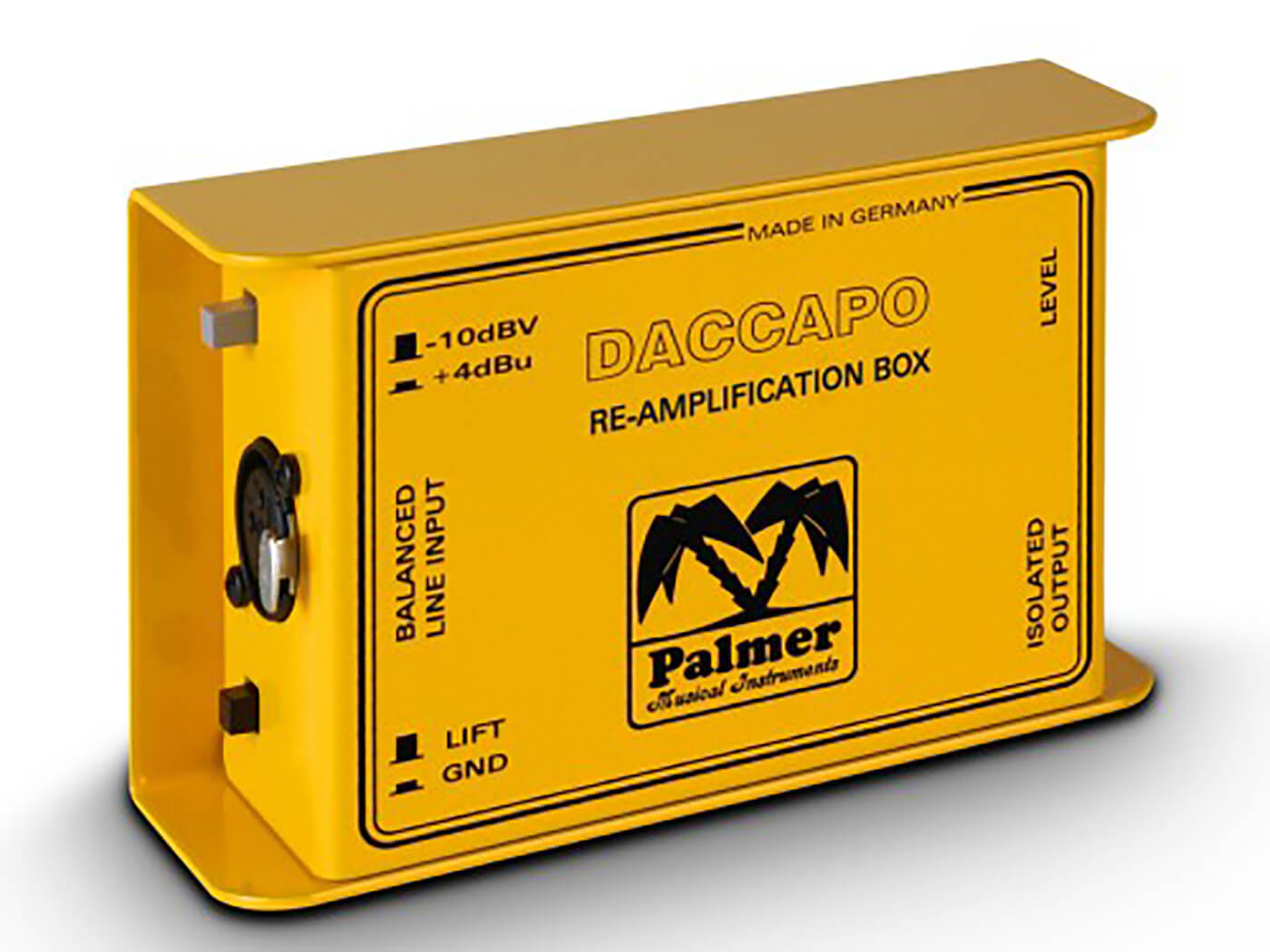 The Palmer DACCAPO takes a line-level input signal and drops it to an instrument level that can be connected to a guitar amplifier. In a live rig that includes some computer-based processing, you would insert a DACCAPO between the audio interface’s line output and the amplifier’s input.