This budget interface boasts pro-level bells and whistles that make it a valuable asset, and well worthy of its relatively low expenditure. 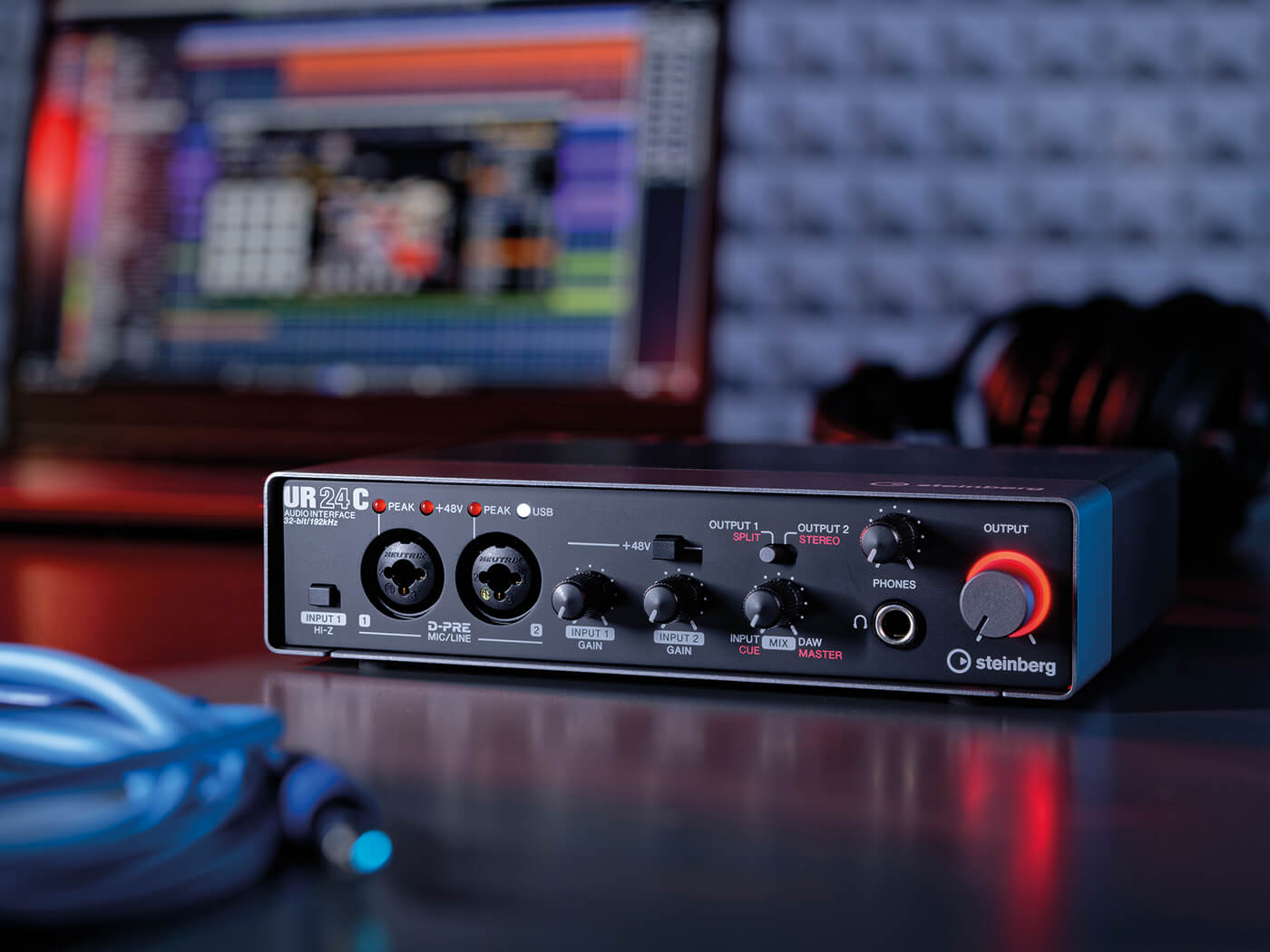 The quality and functionality of budget-level of audio interfaces has never been better. This is brilliant news for anybody looking to set up their first studio or upgrade their existing rig but, with the market awash with so many interfaces with such similar specifications and capabilities, choosing between them can be overwhelming.

Steinberg, best known for its seminal music-production platform Cubase, may have the answer. Having expanded its new UR-C line of audio interfaces, the units now include headline-grabbing features that should help them stand out from the crowd. 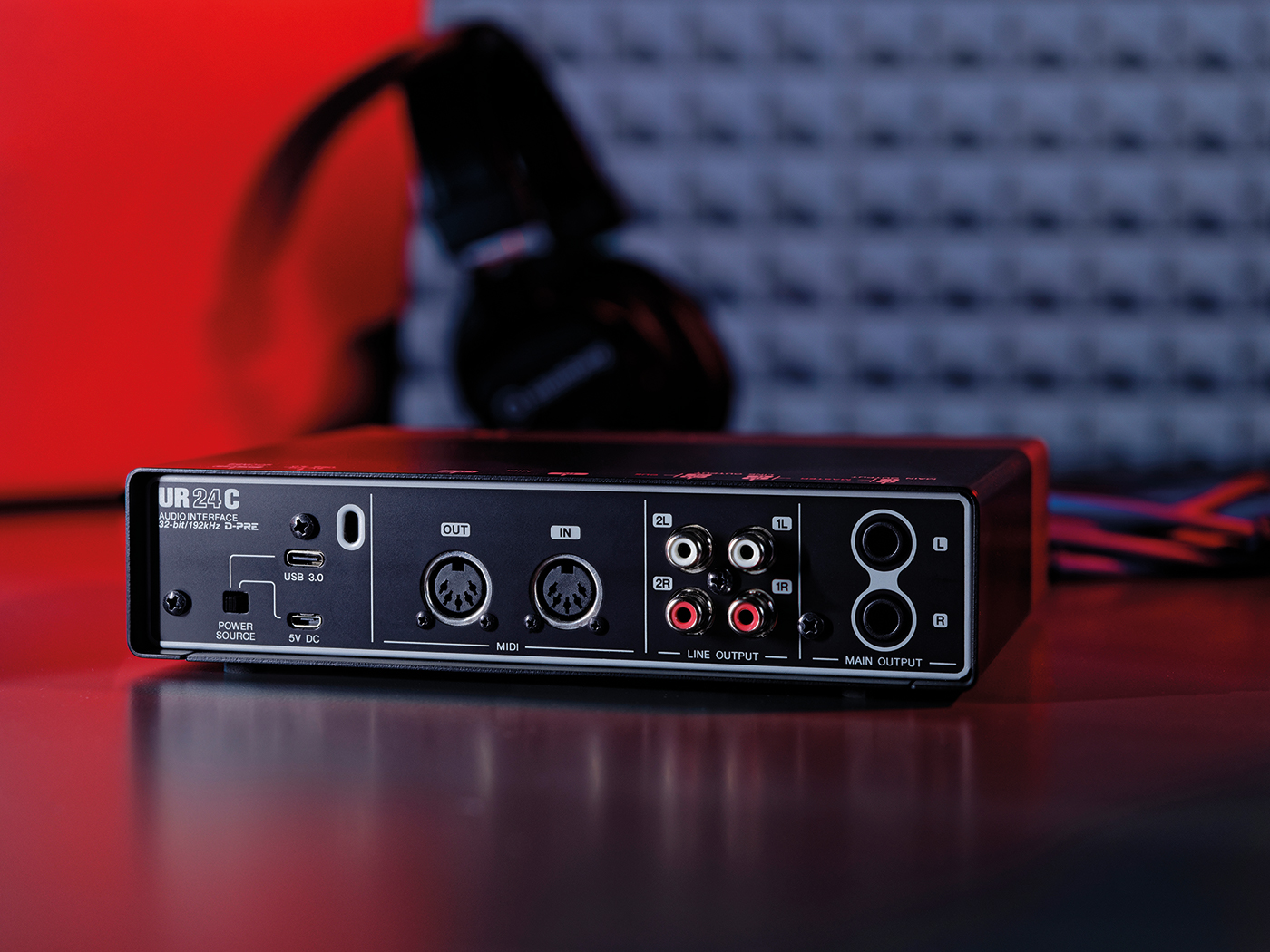 Extra, extra, read all about it

The first of these notable new features is that, like the high-end Steinberg AXR4T that we looked at last year, all members of the UR-C family feature 32-bit converters. This is in contrast to the 24-bit converters used in practically every other interface on the market, although the UR-C range’s maximum sample rate of 192kHz is pretty much standard.

Bit depth determines the dynamic range of a digital audio system – that is, the difference between the quietest and loudest sounds the system can represent. In a 24-bit system, the theoretical maximum dynamic range is 144dB. In a 32-bit system, it’s 192dB, a significant increase.

However, in practice, an increase in the dynamic range manifests as a reduction in the system’s noise floor, this being the point at which the signal becomes indistinguishable from the noise inherent in the system. At 24 bits, the noise floor is already very low. You would need exceptionally good monitoring and hearing to discern any difference between 24-bit and 32-bit conversion.

Where 32-bit conversion is noticeably beneficial is in its ability to give you increased headroom when tracking and mixing without compromising the dynamic quality of the material. It’s true that the UR-C range’s 32-bit conversion may be more of an attention-grabber than a necessity, it’s a nice thing to have nonetheless.

The other standout feature, especially when it comes to the smaller units in the UR-C range, is that they include onboard DSP effects, a luxury more commonly reserved for much more expensive hardware. Each input channel has a pair of insert slots where you can apply a Yamaha Morphing Channel Strip plug-in or one of four Yamaha Guitar Amp Classics amp models.

The results of processing can be bussed to the DAW for recording or restricted to the direct-monitoring signal only. As well as the inserts, each input channel also has a send bus that feeds a flexible Yamaha Rev-X reverb processor that operates only on the direct-monitoring bus and cannot be recorded. All of these plug-ins are also installed as native VST3 and AU plug-ins that you can use in your DAW. 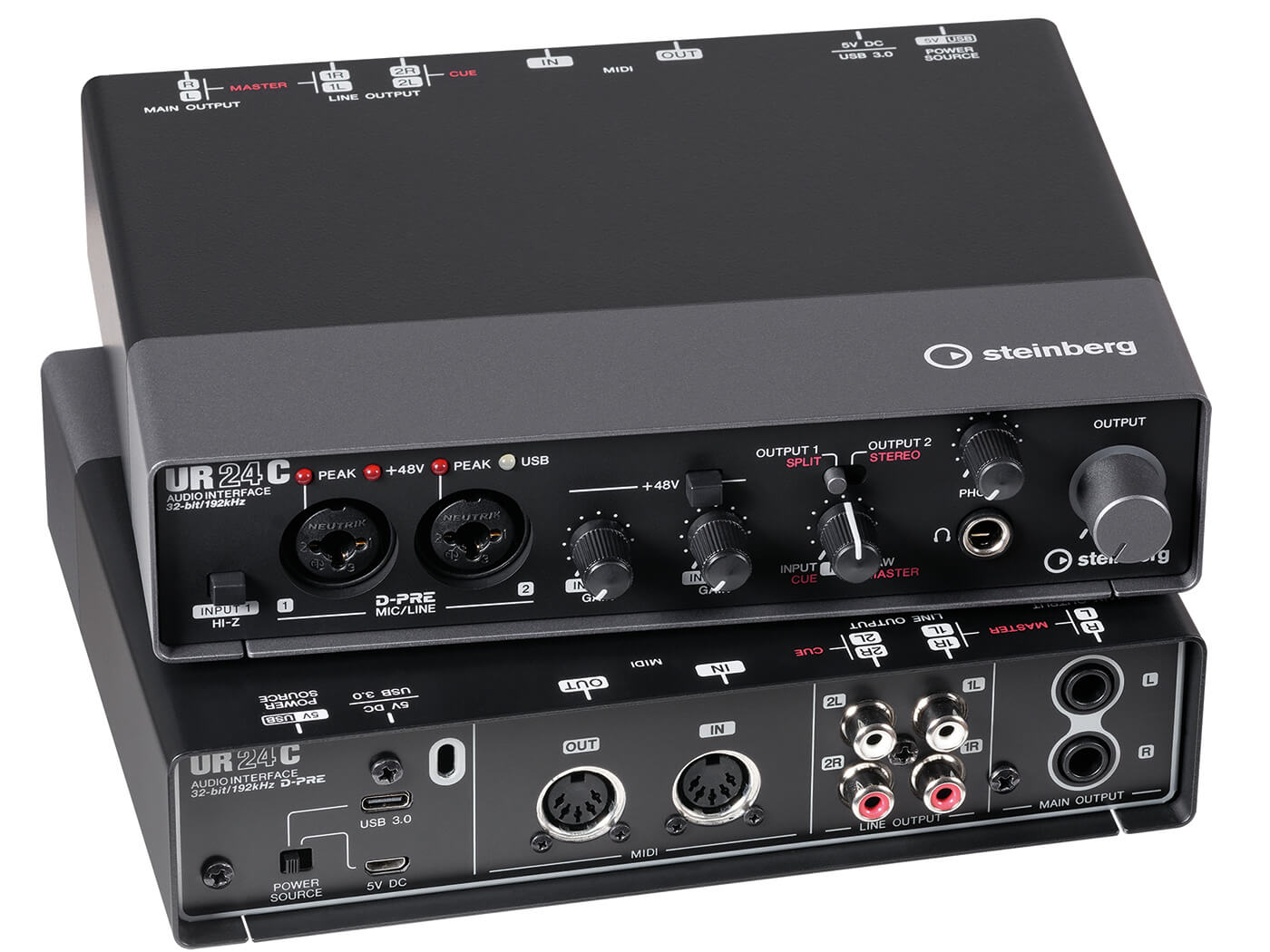 But what about the UR24C? Though less than half-rack-sized, it sits in a surprisingly heavy metal enclosure that houses two front-facing XLR/jack input connectors and, on the rear, a pair of main output jacks and two pairs of phono sockets. The first pair of phonos mirrors the signal being fed to the main output, while the second pair can be used as an independent stereo output for driving a second pair of monitors, for example, to carry cue mixes for performers to use.

The use of phono connectors is undesirable from a studio point of view – we’d prefer standard jack sockets for the second output bus. The reason for this, though, is that the UR24C is aimed at DJs, as well as studio monkeys, and DJ equipment is more likely to make use of phono connectors. The support for DJs goes further too, with two monitor modes – DAW and DJ – that change the way the output busses behave.

In DAW mode, the front-panel mix knob controls the balance between the direct monitored signal and the DAW’s mix output signal. The second output pair can have signals sent to it from the DAW, and a small switch above the mix knob determines whether the headphone output carries the output one and two or output three and four signal.

In DJ monitor mode, the main pair of outputs carries a mix of the hardware input signal and the main output from your DJ software, while the second pair of outputs carries only the monitor/cue output from your DJ software. In this mode, the switch above the mix knob switches the headphone output between the main stereo mix, and a dual-mono signal in which the DJ software’s main output feeds the right headphone and the cue output feeds the left.

Both of the UR24C’s input channels feature Yamaha’s class-A D-PRE mic preamps, ensuring a clean, transparent, uncoloured signal path. The first input channel can be switched to take an instrument-level input from an electric guitar or bass too. The rest of the unit’s front panel is occupied by a pair of input gain controls, the aforementioned mix knob, a headphone output and volume control, and a main output volume control.

Around the back, alongside the audio outputs, there’s a MIDI I/O pair and a pair of USB-C sockets, one of which connects to the host computer via either USB-2 or USB-3, and the other available for connecting power to the interface when using it with an iPad or iPhone. Conspicuous by its absence is any form of digital I/O. 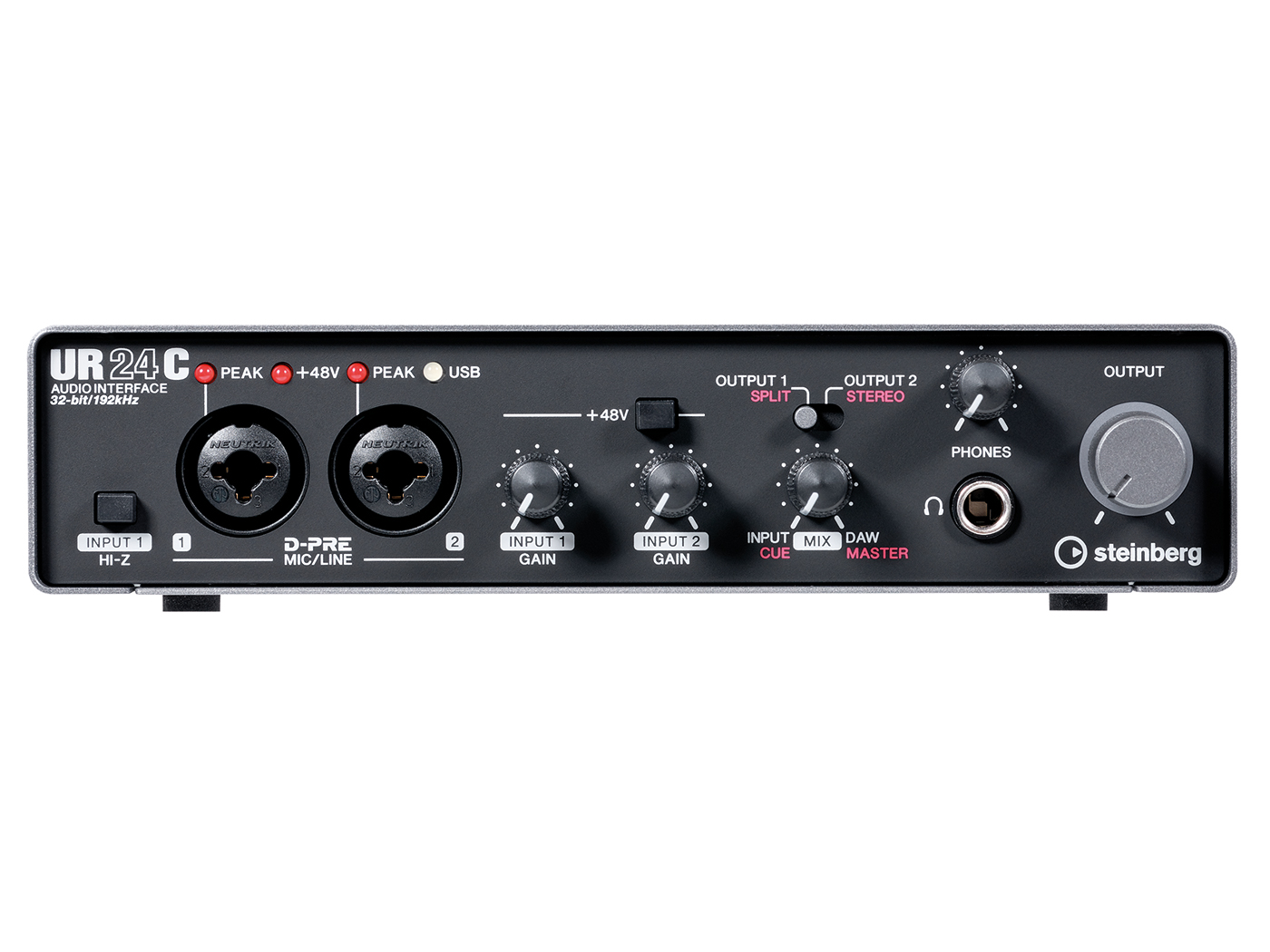 The UR24C comes with licenses for Cubase AI (Windows/Mac) and Cubasis LE (iPad/iPhone) but it can of course work with any DAW. If you use Cubase with the interface, though, you’ll be treated to improved integration between DAW and hardware, with hardware signal levels available directly within Cubase, and a handy button for opening the UR24C’s dspMixFx hardware controller software. From here, you can set up the aforementioned DSP effects, switch the inputs between two-channel mono and stereo operation, enable the interface’s built-in audio loopback feature, and change the monitoring mode between DAW and DJ.

Given its rich features, the UR24C certainly makes its presence known on the audio-interface market, and the unit’s high-end assets might make you do a double-take at its very reasonable price. 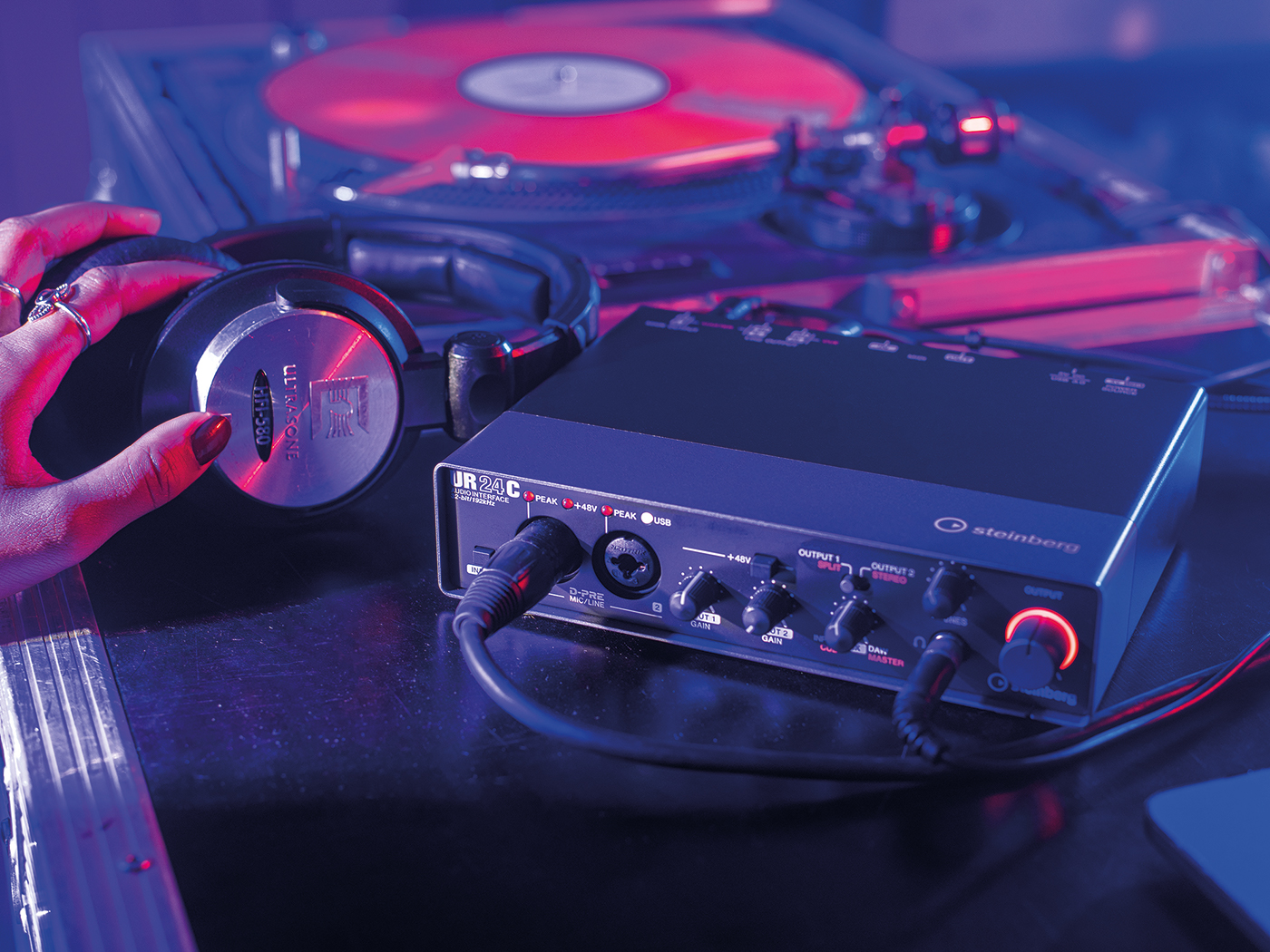 Every studio needs a way of getting audio into and out of a computer. Whether setting up a new system or upgrading an existing one, the UR24C (and, indeed, the whole UR-C family) demands consideration. Its 32-bit converters certainly make this a standout option, and its built-in effects processing, while not the most advanced example of the concept, is an absolute boon too.

DJs are well catered for here, much more so than with comparable audio interfaces. From this perspective, the phono output connectors are more convenience than killer feature, because jack-to-phono cables are not exactly difficult to get hold of. But the DJ monitor mode is a fantastic addition that should make UR24C a popular choice among this group of users. 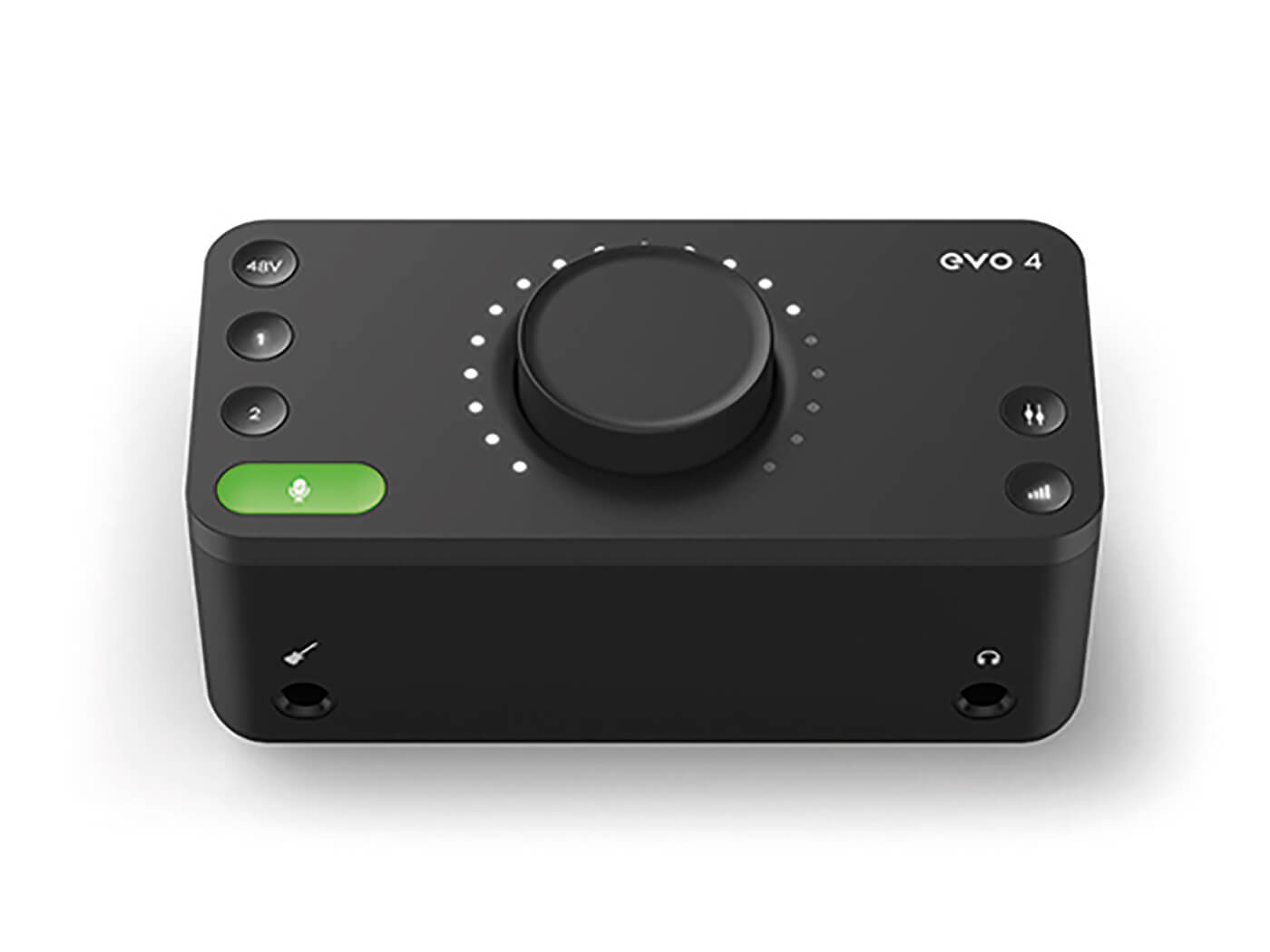 This is a compact 2-in 2-out audio interface with a sleek and minimal design. The interface features Audient’s Smartgain system, which sets the ideal input gain automatically so that users can focus on performance rather than technicalities. Look out for the upcoming 4-in 4-out Evo 8 too. 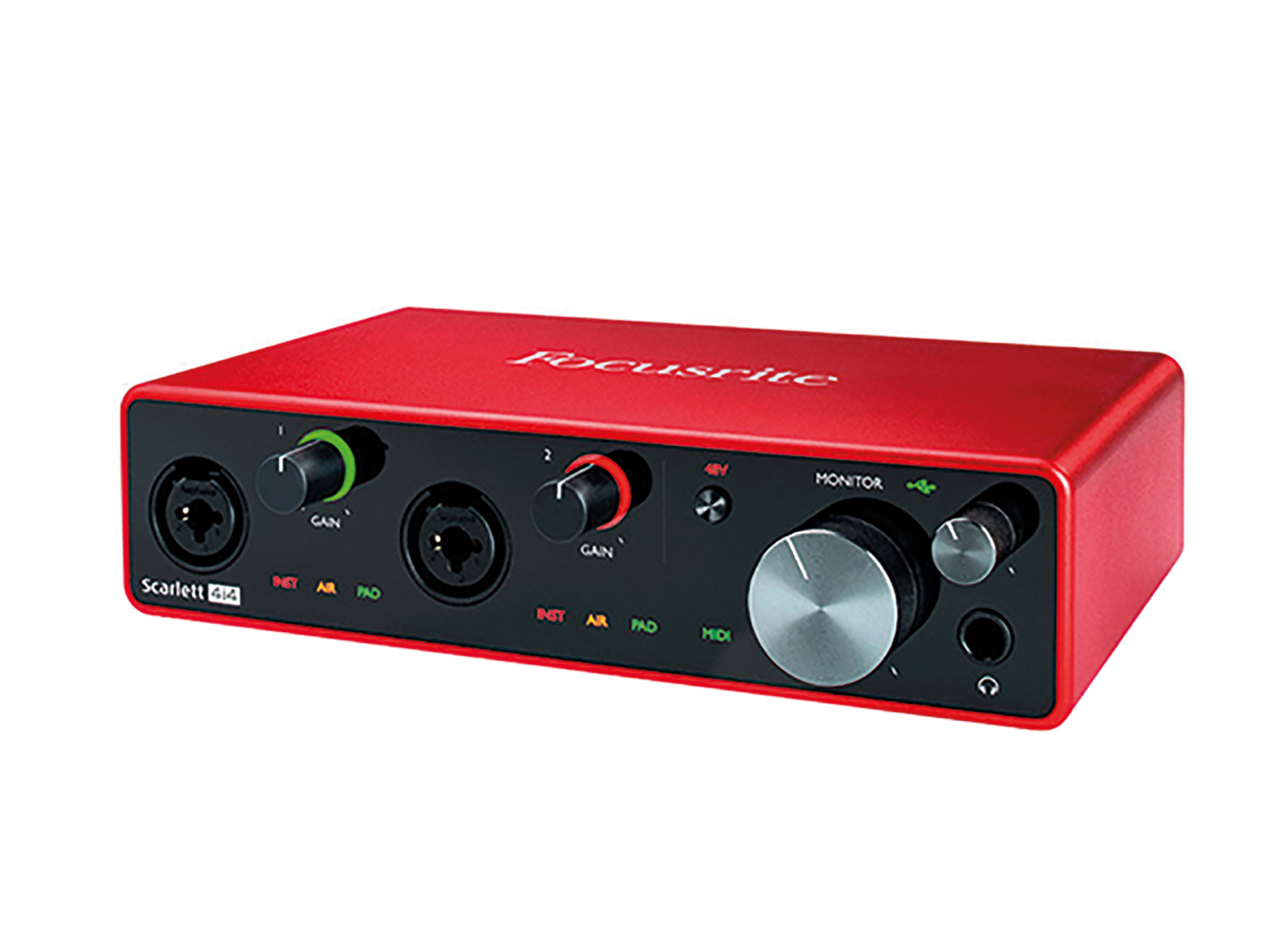 The Focusrite name carries a lot of weight in the pro audio world, thanks in particular to its mic preamp technology. This expertise has been distilled into the Scarlett range of audio interfaces for home and project studios. The 4-in 4-out 4i4 sits around the middle of that range.