SSL UC1 review: the SSL sound (and feel) in the DAW?

With its dedicated plug-in controller, SSL aims to bring the tactility and sonic magic of its consoles to your computer. 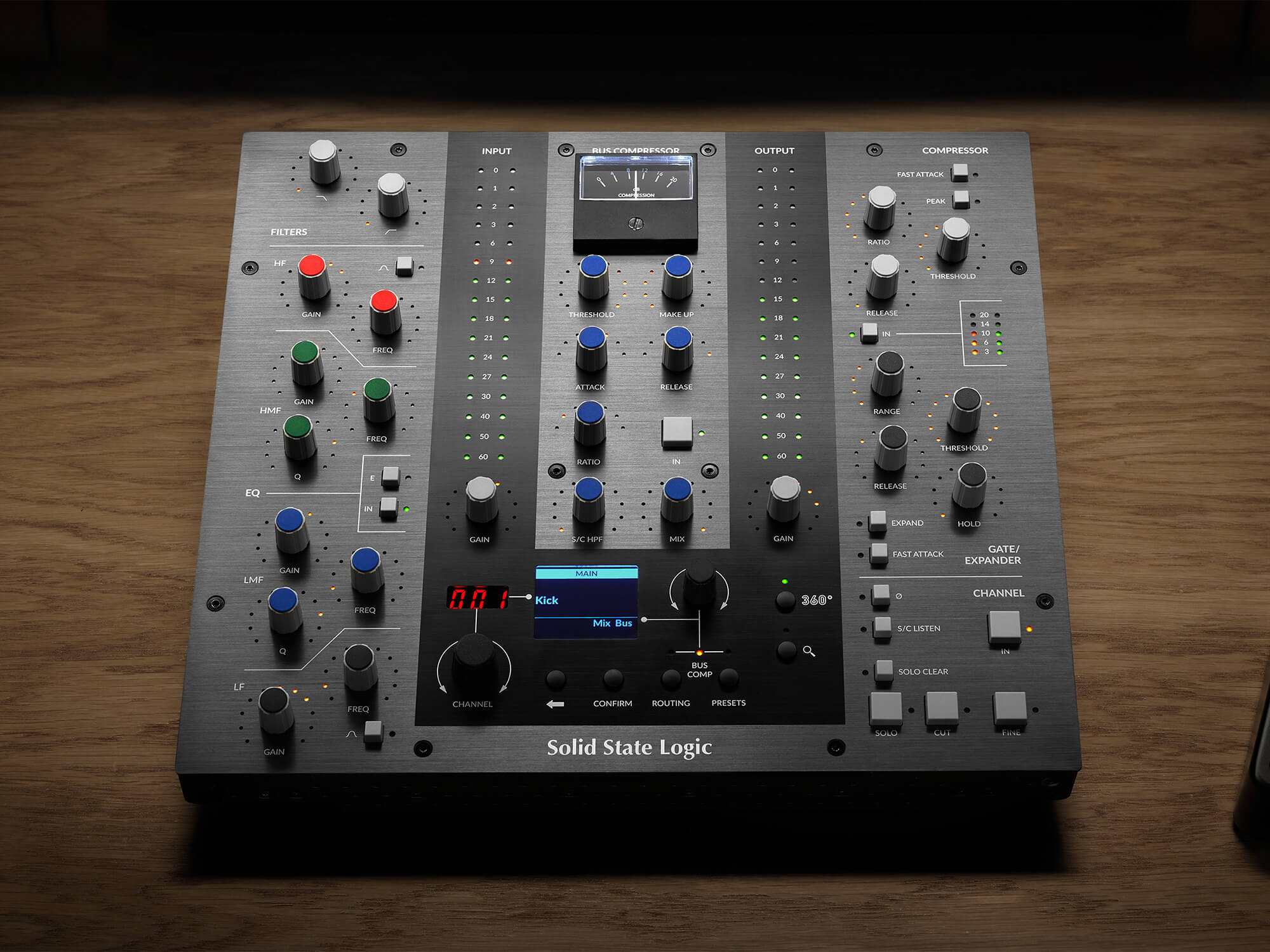 ⊖ Ties you to SSL-only software processing.
⊖ Some controls would have benefited from detents.
⊖ 360° mixer software only offers two zoom levels.

SSL’s console channel strips and stereo bus compressor are rightly considered studio classics, and SSL has offered them in software for some years. Now, the British pro audio firm adds some tactility back into the DSP realm with the UC1 controller. It’s a well-made, attractive device and the accompanying plug-ins sound fantastic, but its utility depends on your determination to escape the shackles of mouse and screen.

The UC1 is a knob-per-function hardware interface for controlling the new SSL Native Channel Strip 2 and Bus Compressor 2 plug-ins, both of which come in AAX, AU and VST3 formats. These are accompanied by plug-in mixer software called SSL 360° that helps you access multiple channels and compressor plug-ins.

As the UC1 is only a controller, the plug-ins themselves do the signal processing. The Native Channel Strip 2 plug-in is based on the familiar SSL 9000K series consoles. This consists of a 4-band parametric EQ and variable low and high-pass filters alongside a dynamics section with independent compressor and expander/gate elements. You can also change the routing order of the EQ, filters and dynamics, and switch the EQ between E and G Series characteristics. This is standard SSL fare; in other words, solid, but with few frills. 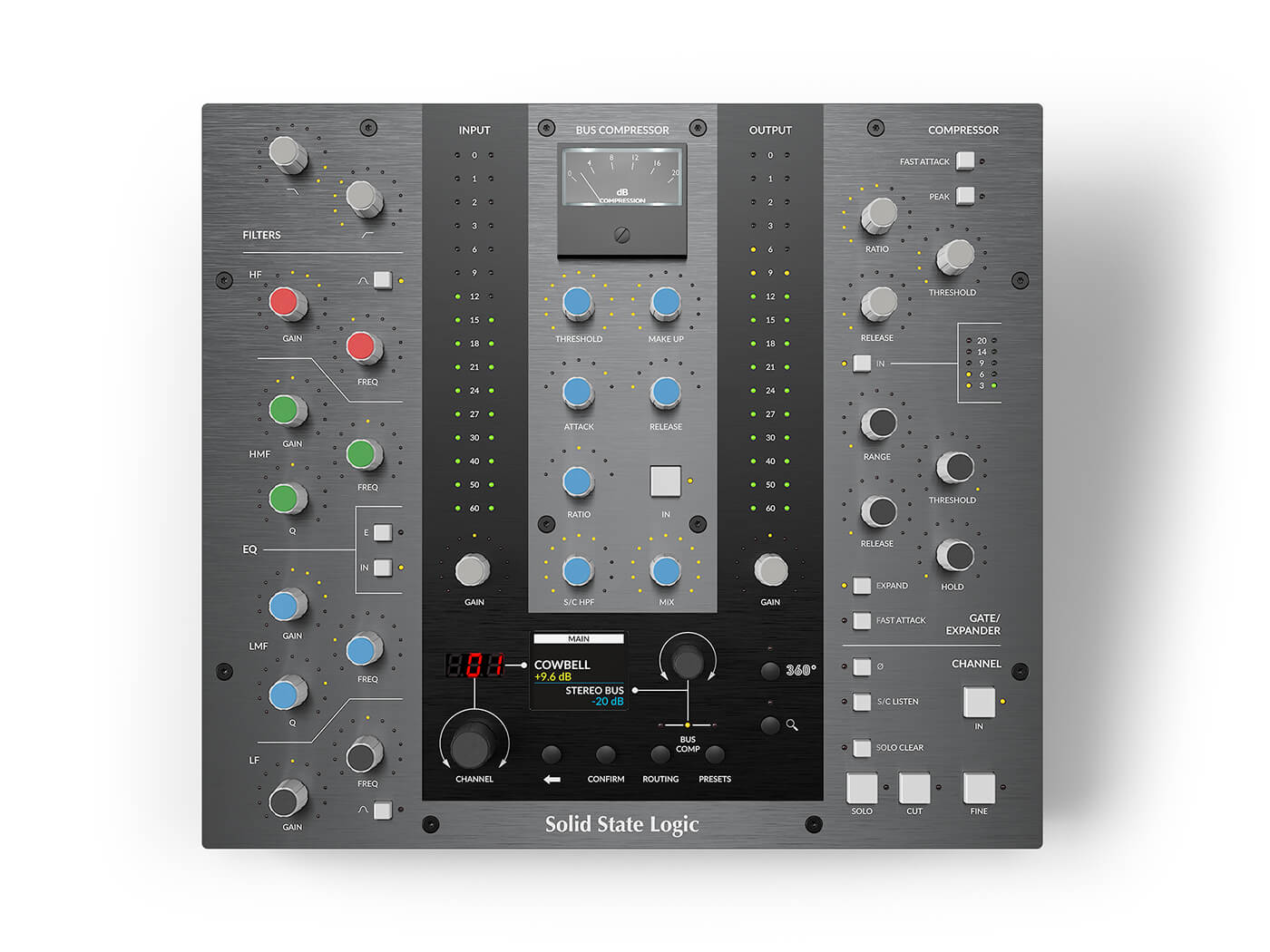 There are several SSL-style channel strips out there, some of which SSL endorse. Still, according to SSL, this latest version has improved audio fidelity, and lower CPU hit thanks to ‘Anti-Cramping’ technology. If you’re unfamiliar with the term, EQ cramping is an asymmetry of frequency and phase response between 15kHz and 20kHz. Other manufacturers use DSP-hungry oversampling to counteract this effect, but SSL’s approach requires no oversampling or extra delay compensation. With this being a channel plug-in you’re likely to track through, that’s a point in SSL’s favour.

The Bus Compressor 2 follows in its hardware and software predecessors footsteps with only a few minor changes. Unlike the hardware, the software features a Wet/Dry Mix control (for parallel compression duties), with the software adding oversampling options and more Attack, Release and Ratio settings. Oversampling improves fidelity when employing faster dynamic control settings, but with a significant upswing in CPU, so perhaps best used sparingly on larger projects and exclusively when mixing. 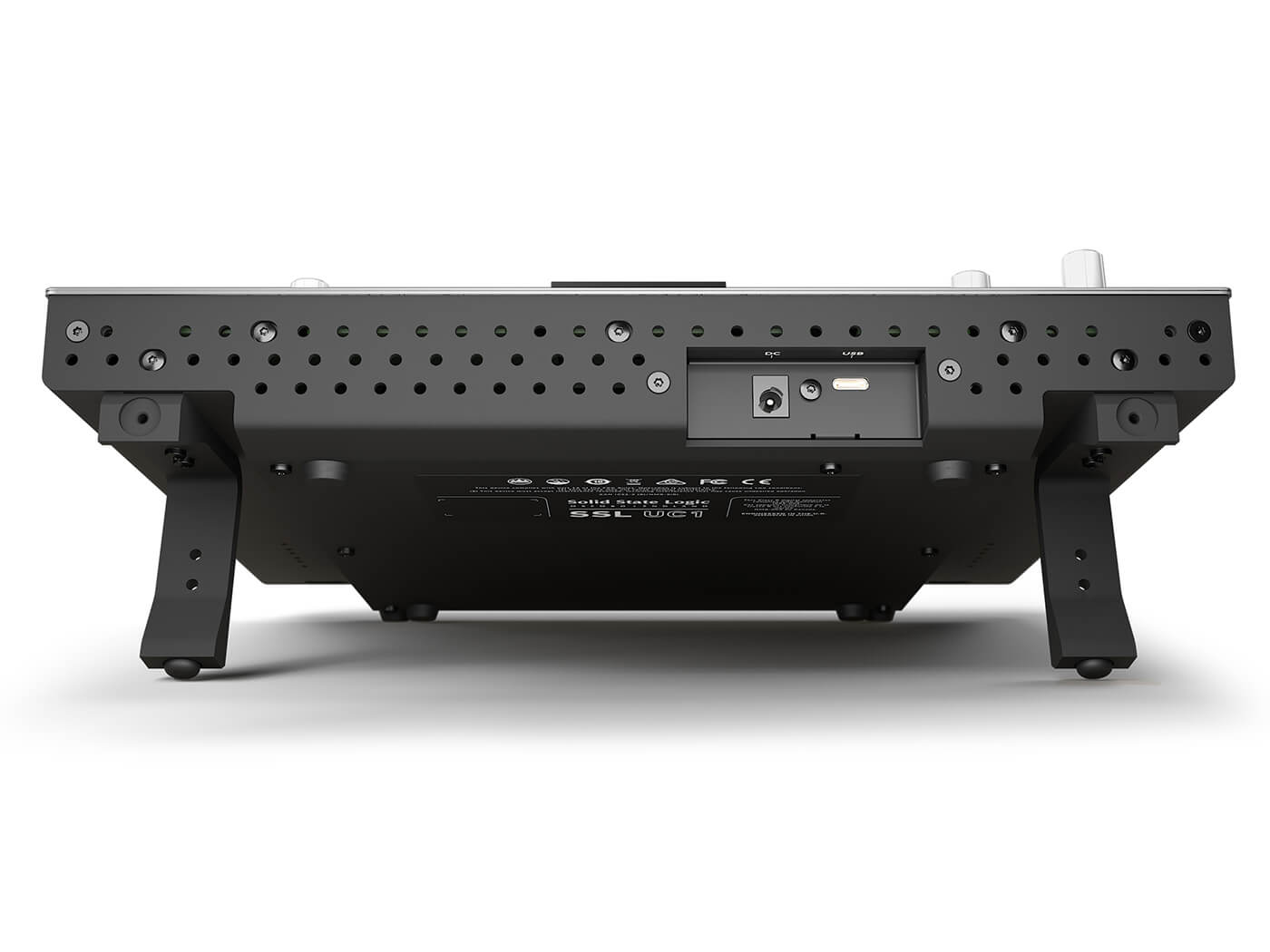 Both of SSL’s plug-ins look great, and while not offering any unusual frills, they are practical and easy to use – which brings us back to the UC1.

The knob-per-function layout parallels what’s on-screen for both plug-ins. Parameter knobs control continuous encoders (without detents), with visual feedback coming from small circular LED arrays around each. This is effective for getting a sense of relative parameter changes, but you need to look at your computer screen or the built-in display to view actual parameter values. It’s certainly not as immediate or engaging as the standard pots found on SSL’s analogue gear. That said, the knobs and buttons are largely solid and responsive, and generally feel of decent quality, with each section laid out clearly.

However, it is a shame that those parameters that are stepped in nature (such as the Bus Compressor’s time and ratio controls do not have detents for a more realistic feel. It would also have been nice to see some of the software’s ‘backlit’ buttons make their way to the controller. There are a lot of grey buttons on the device. 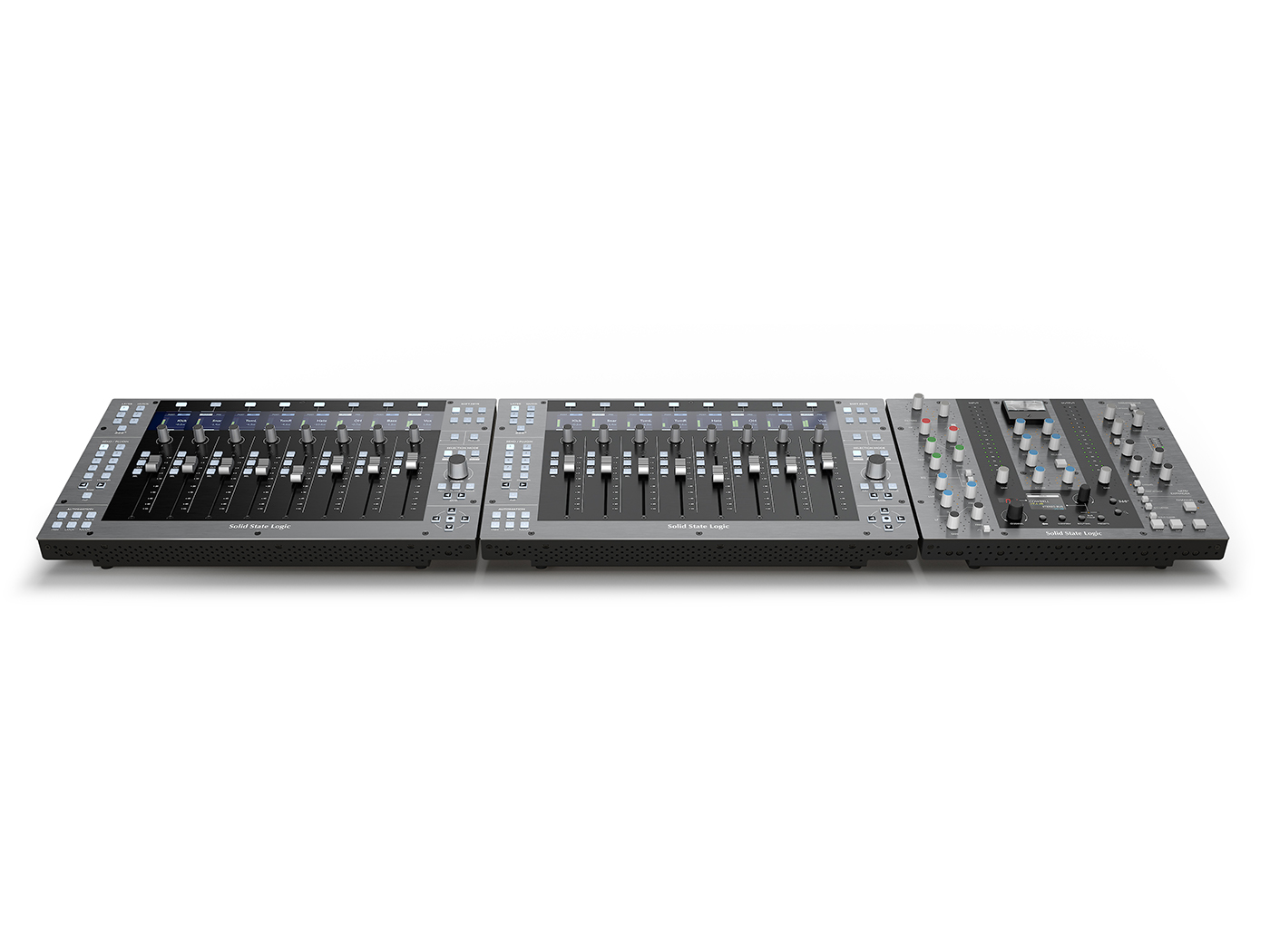 The UC1 is very straightforward to use, with SSL getting around the fact that you might have their plug-ins scattered across a mix (and not necessarily on every channel) with the 360° plug-in mixer. This standalone software does no processing or routing itself, but instead acts as a navigation aid, with each subsequent instance of the Channel Plug-in getting its own mixer channel slot, and with all Buss Compressor instances displayed down the side. The overall effect is like building a virtual SSL console, with plug-in/channel selection achieved by clicking on the relevant area of the software window or using the selection knobs on the hardware.

However, the 360° mixer could offer more zoom options to maximise its usefulness; currently, the GUI is either very small or too large to fit on the screen.

Secondly, the hardware layout has the bus compressor section dead centre. This splits the channel strip in two, confuses the signal flow and metering, and makes for a less cohesive experience moving from hardware to software control. For those who use the Buss Compressor only occasionally (i.e. on busses), this also represents a large area of wasted space. Perhaps SSL wanted to keep the analogue VU meter as the centrepiece of the controller. Regardless, the layout might have been optimised and just as practical within a smaller footprint. 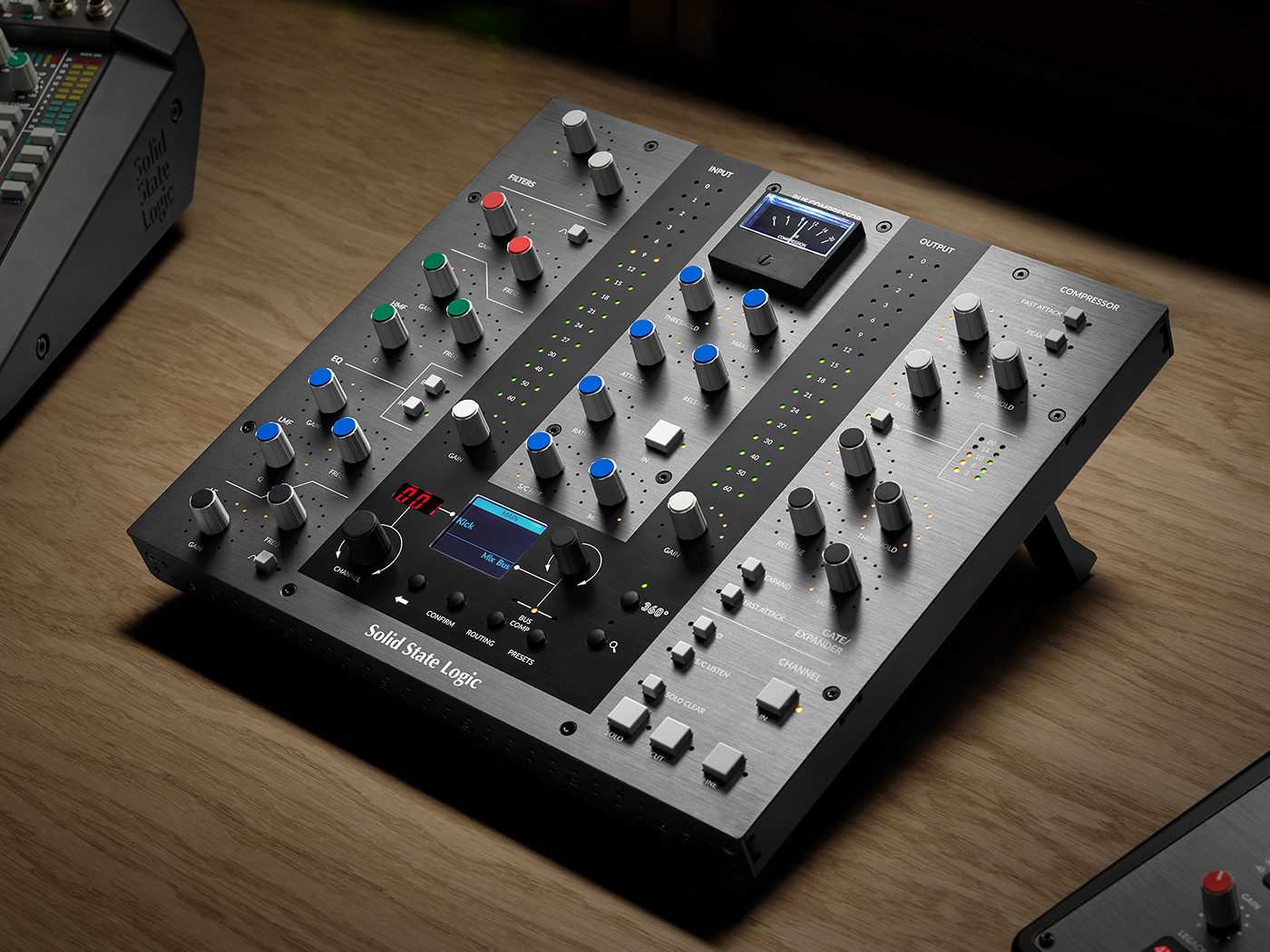 Getting potential users to spend £595 on a controller dedicated to two specific plug-ins is a big ask, and there is no news yet on whether it will support officially authorised SSL plug-ins from third parties. There is also stiff competition from Softube’s Control 1 system (which offers more and varied types and makes of processing). Other companies such as TC Electronic allow users to rediscover their design heritage via plug-ins and dedicated hardware controllers. However, TC tends to target individual effects with smaller footprint button-heavy hardware.

However, SSL is no ordinary company, and it has created a formidable legacy on the back of audio excellence. Also, when you factor in that the plug-ins alone cost £238 each, it begins to look like more of a bargain.

Ultimately, the attractiveness of the UC1 depends on how far you wish to go to escape the mouse and screen, and whether you are happy to stick with an SSL-focused approach to channel processing and compression. If you do, then this is a quality piece of kit. 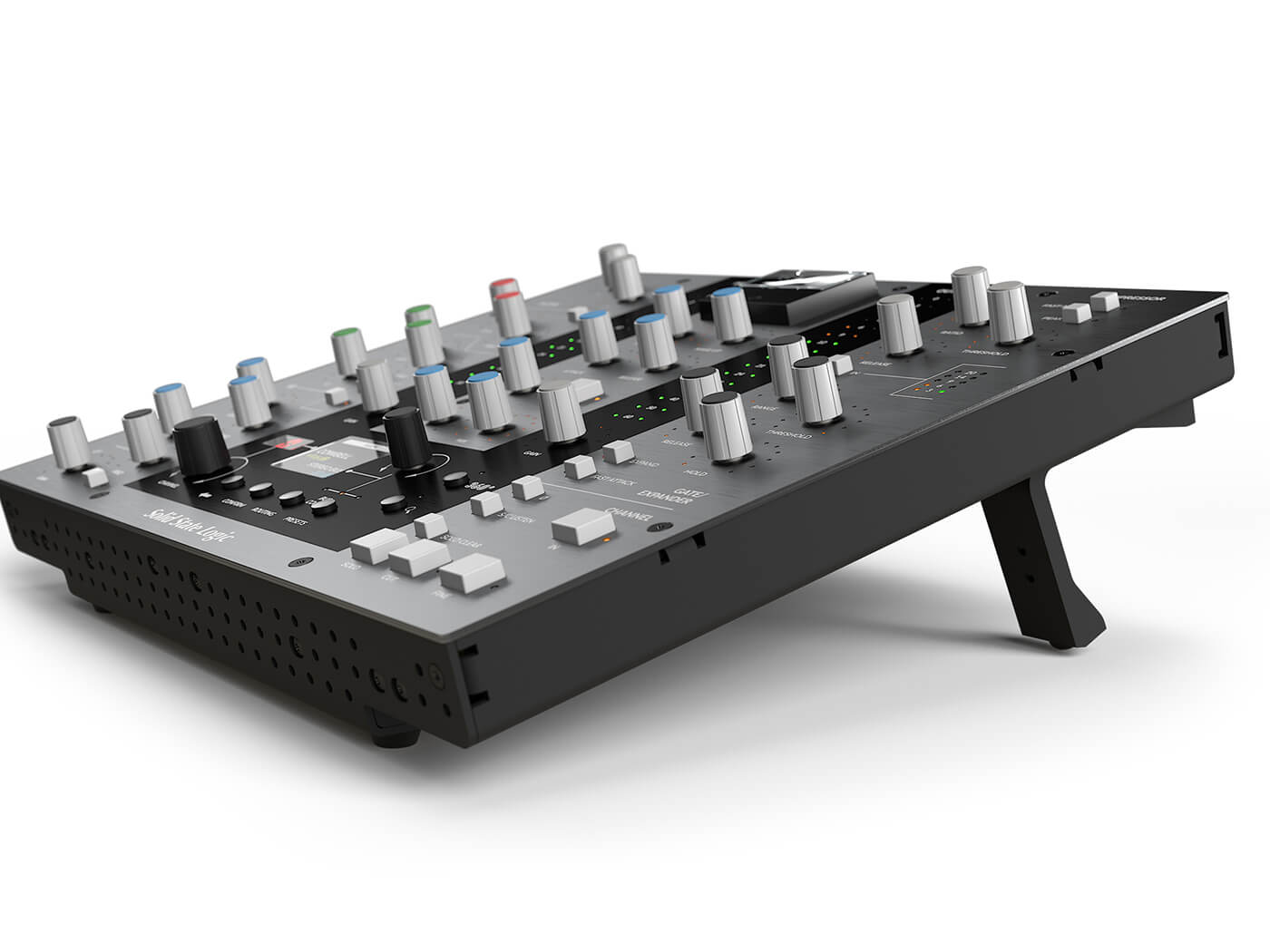