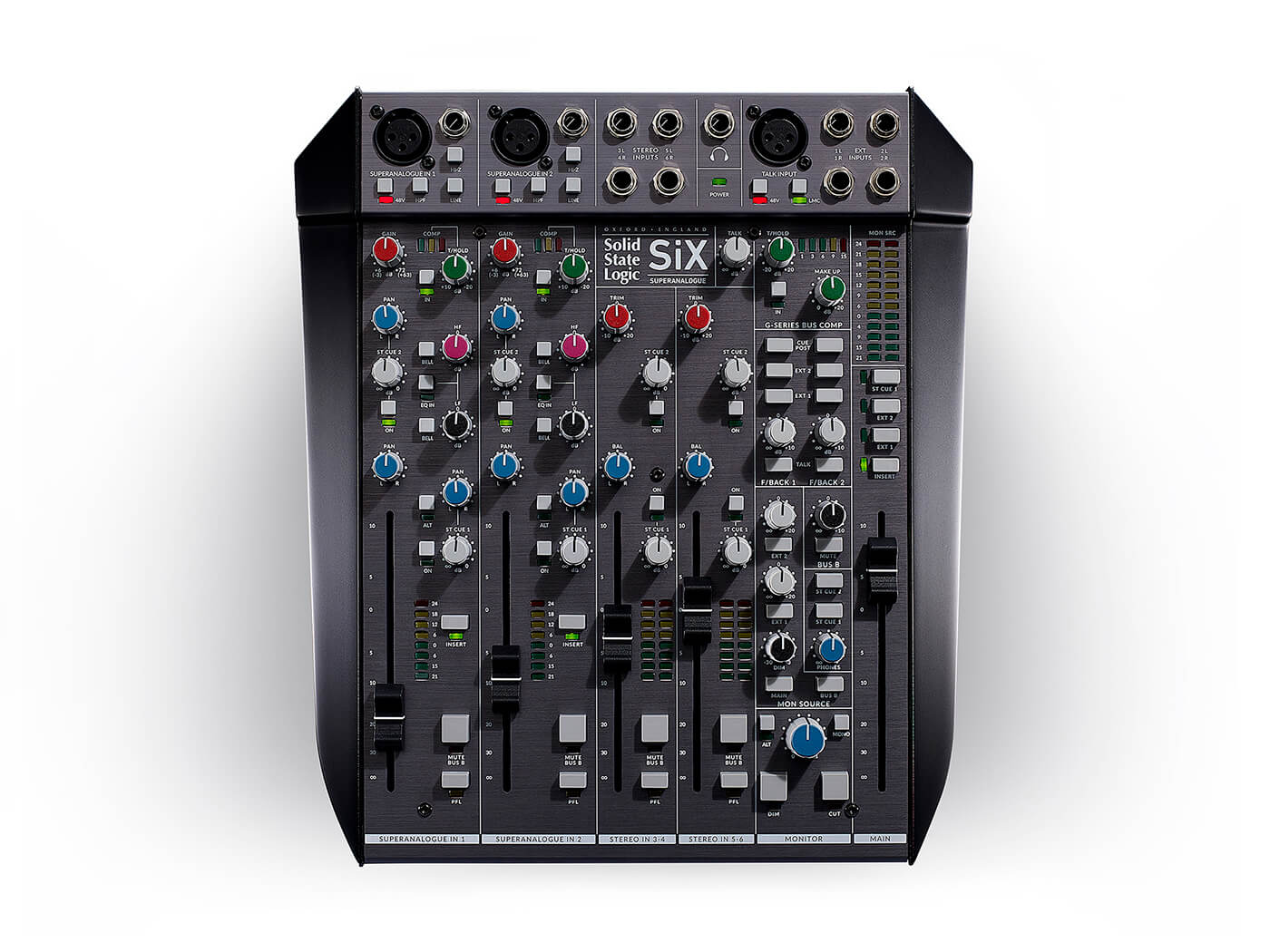 The growth and popularity of home and semi-professional studios, which by definition have limited space, has led to there being a wide range of choice in the desktop-mixer market. These diminutive consoles can be ideal for input conditioning during recording and as a hands-on analogue stage during mixing, especially when feeding stem submixes via the mixer.

Small-format consoles are also ideal for portable systems, location work, video-editing suites and small outside-broadcast units. But while there are a lot of mixers out there that fall into the ‘desktop’ category, there are very few options for those who require a compact analogue mixer with the features and pristine sound quality of a high-end analogue studio console. Enter SiX, a new compact mixer from British console legends Solid State Logic (aka SSL).

SSL has been in the pro-audio business since the 70s and its large-format professional mixing consoles are widely regarded as being the best money can buy… if you have enough of it! These beautiful beasts can be found gracing top-flight studios the world over, such as the legendary Abbey Road Studios in London, Peter Gabriel’s Real World Studios near Bath in the UK, specialised film-scoring studio Synchron Stage in Vienna, The Hit Factory Criteria in Miami, and Larrabee Studios in Los Angeles.

One of the key reasons top studios choose SSL is because of the company’s unimpeachable reputation for – and uncompromising devotion to – perfection. Where so many lesser consoles use off-the-shelf components and circuit designs, SSL developed its own bespoke circuits, and build these using only the best components. And when components that perform to SSL’s exquisitely high standards don’t exist, the company just designs its own and then advises the component manufacturers about how to make better components!

SiX has been built using SSL’s trademark SuperAnalogue technology, as found throughout its product line, up to and including its large format consoles. This gives a fully balanced signal path throughout (with the exception of the headphone output), wide dynamic range, ultra-low noise and distortion and superb accuracy and fidelity. 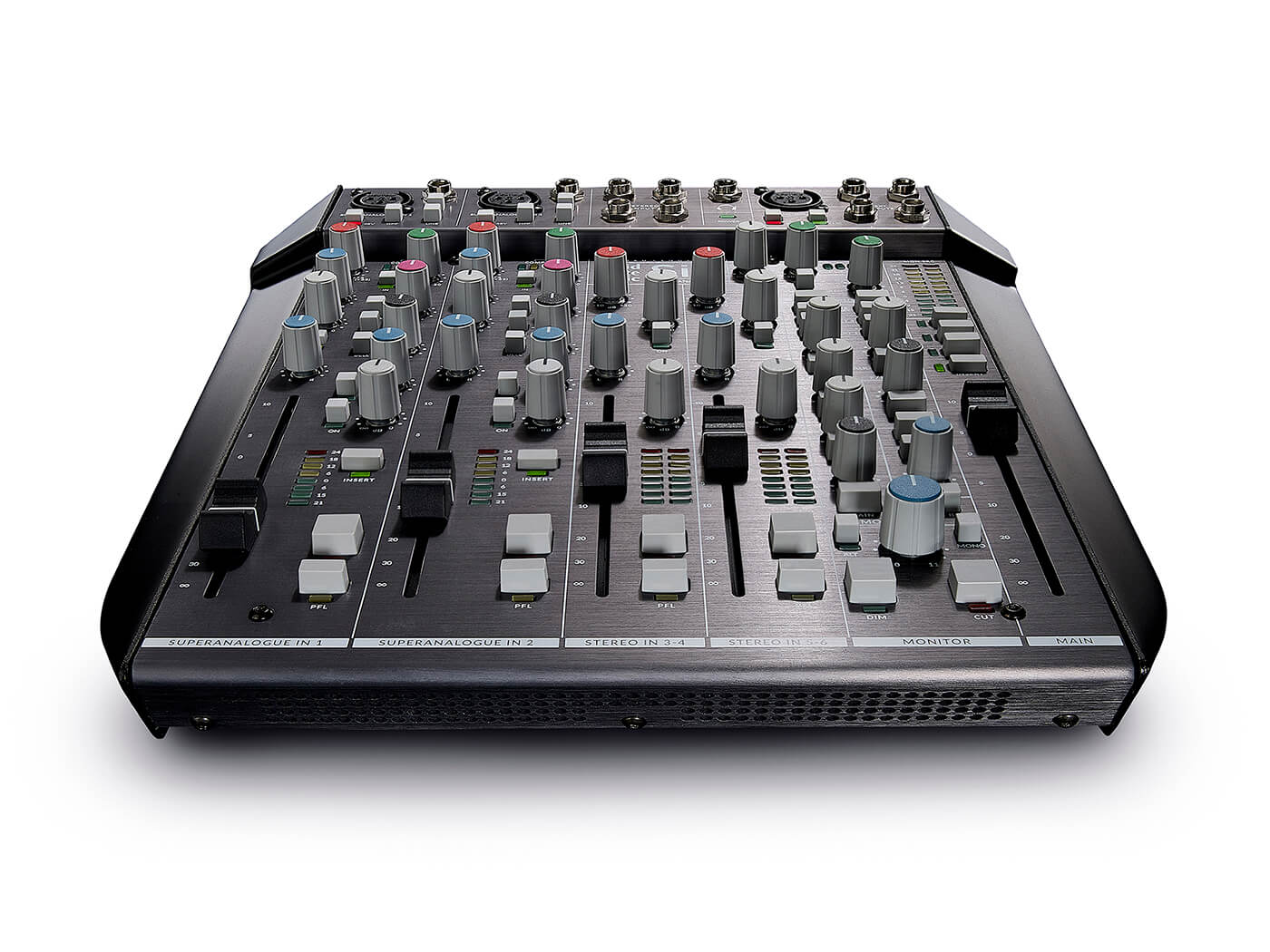 As its name suggests, the console features six input channels, arranged as two mono channels (referred to as Recording Channels) and two stereo channels. The mono channels are equipped with SSL’s superb SuperAnalogue mic preamps, which provide a large 66dB of mic gain range, individually switchable phantom power and 75Hz high-pass filter. The preamps can also be switched for line-level and instrument level input; the latter being ideal if you’re using software amp modelling for your guitar and bass parts, or simply want to capture a direct pickup signal for later re-amping.

Following the preamp, each mono channel sports a 2-band equaliser based on the EQ circuit found in SSL’s classic E-series consoles. In standard operation, the two bands are configured as high and low shelving EQs at 3.5kHz and 60Hz respectively, but each can be switched to a bell-curve mode, too, which also changes the centre frequencies to 5kHz and 200Hz respectively. Both bands have a healthy -15dB to +15dB of cut/boost, and the EQ can be switched out of the signal path altogether when not needed.

The next stop-off along the Recording Channel signal path is a built-in channel compressor, a new design created especially for SiX using SSL’s 40-plus years of know-how. Its single control adjusts the processor’s threshold between +10dBu and -20dBu, while the attack varies between 8ms and 30ms dependent on the signal’s characteristics. The ratio and release time are fixed at 2:1 and 300ms respectively and make-up gain is automatic. A set of three LEDs – green, amber and red – indicate the amount of compression being applied.

Moving on, we come to a pair of stereo cue sends, each of which can be individually panned and be switched in or out of the signal path. This is followed by a bypassable balanced insert point, an eight-bar level meter, a Mute/Bus B button and a pre-fade listen button. The channel is finished off by a 100mm fader taken directly from SSL’s large-format consoles. 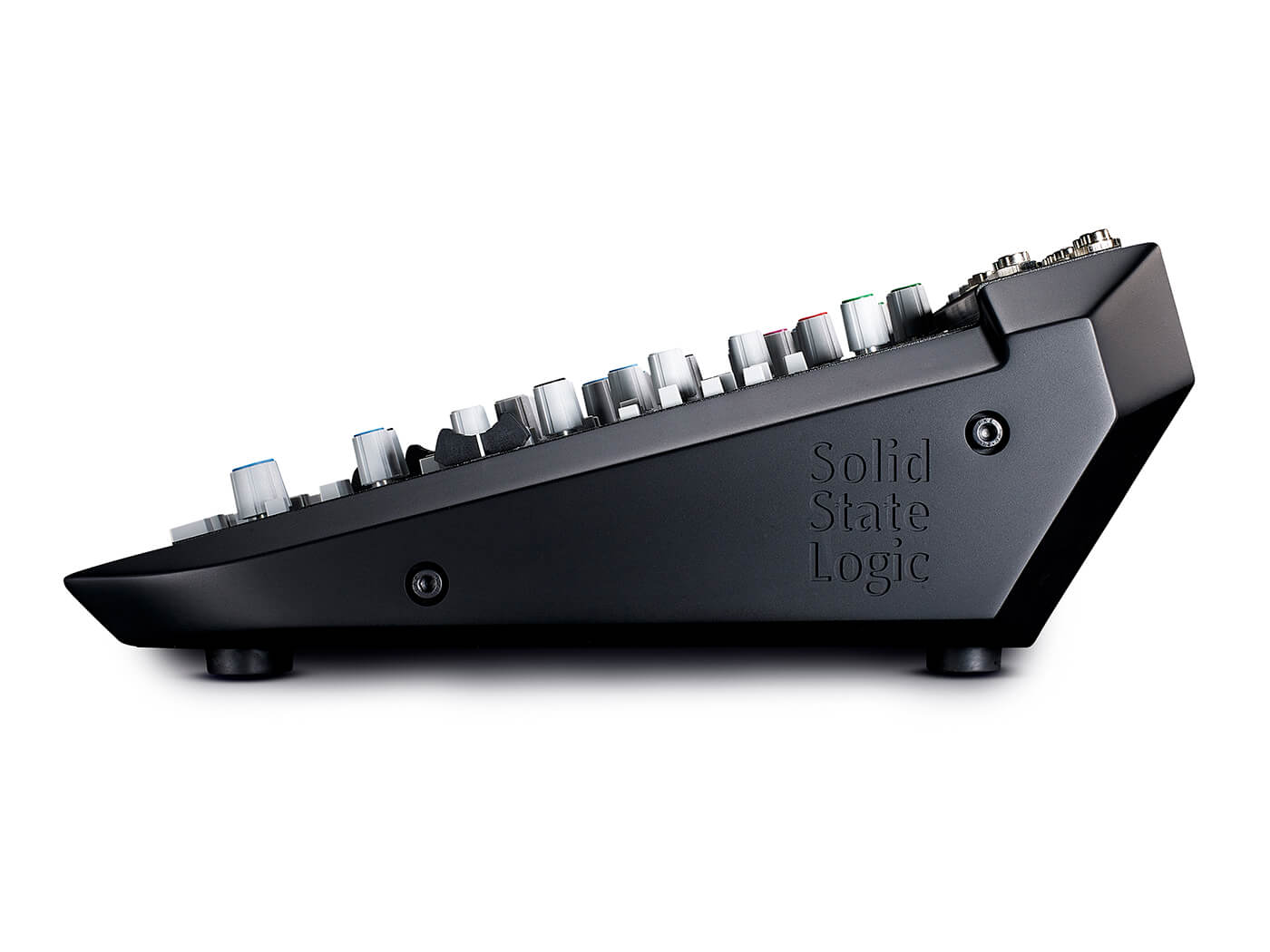 SiX’s stereo input channels aren’t as highly spec’d as its recording channels, lacking EQ, compression and insert points, but feature the same pristine signal quality. As well as these and the mono channels, SiX also has a few additional inputs: there’s a talkback mic input with phantom power and switchable LMC (listen mic compressor) that ensures the talkback signal maintains a consistent level; each cue bus has its own Talk button and the talkback level can be set independently for each of these busses.

Topping off the inputs are a pair of stereo external, or auxiliary, inputs that can be used to buss stereo line signals into the mix, monitoring and cue signal paths.

As indicated by their name, the input channels’ Mute/Bus B buttons serve a dual purpose. When the button is enabled the channel’s signal is routed to a second stereo bus, Bus B. That bus can itself be muted, ensuring the Mute/Bus B buttons operate unequivocally as mute buttons, or can be connected to another point in your studio, such as a pair of inputs on your DAW’s audio interface.

The Main and Bus B busses are not identical, though: while Bus B’s master level is set via a rotary knob, the Main buss is under the control of SiX’s master fader. More to the point, the Main buss has its own bypassable insert point and, best of all, a built-in buss compressor whose design is taken directly from SSL’s hugely acclaimed G-Series console.

As well as two mix busses, SiX also boasts two independent monitor-output busses, something that’s practically unheard of in an analogue mixer of this size. Similarly unheard of is the flexibility of the routing for these busses: external input signals can be mixed into the monitor path, which itself can monitor either the Main or Bus B mix busses. A pair of 12-part LED meters indicate the monitoring level, and there’s even a Dim volume knob and button for quickly dipping the monitoring level when necessary, another feature you wouldn’t expect on this size of mixer.

Externally, SiX’s solid and robust-feeling enclosure is surprisingly small, but the panel layout is nevertheless uncluttered, even spacious. Knobs have just the right amount of resistance and the faders are sumptuously smooth, as you’d expect for something that’s also used in consoles that can cost over a hundred grand! The action of the buttons isn’t quite as smooth and solid as I had expected, but they all work without introducing the slightest hint of a click or noise into the signal.

The main input connectors are housed on the top surface, as is the norm for desktop mixers. The mono channels have both XLR and balanced jack sockets, for mic and line/instrument respectively, with all other channel and external inputs served by balanced jack sockets. The talkback mic’s XLR socket is also conveniently located at the top of the panel. 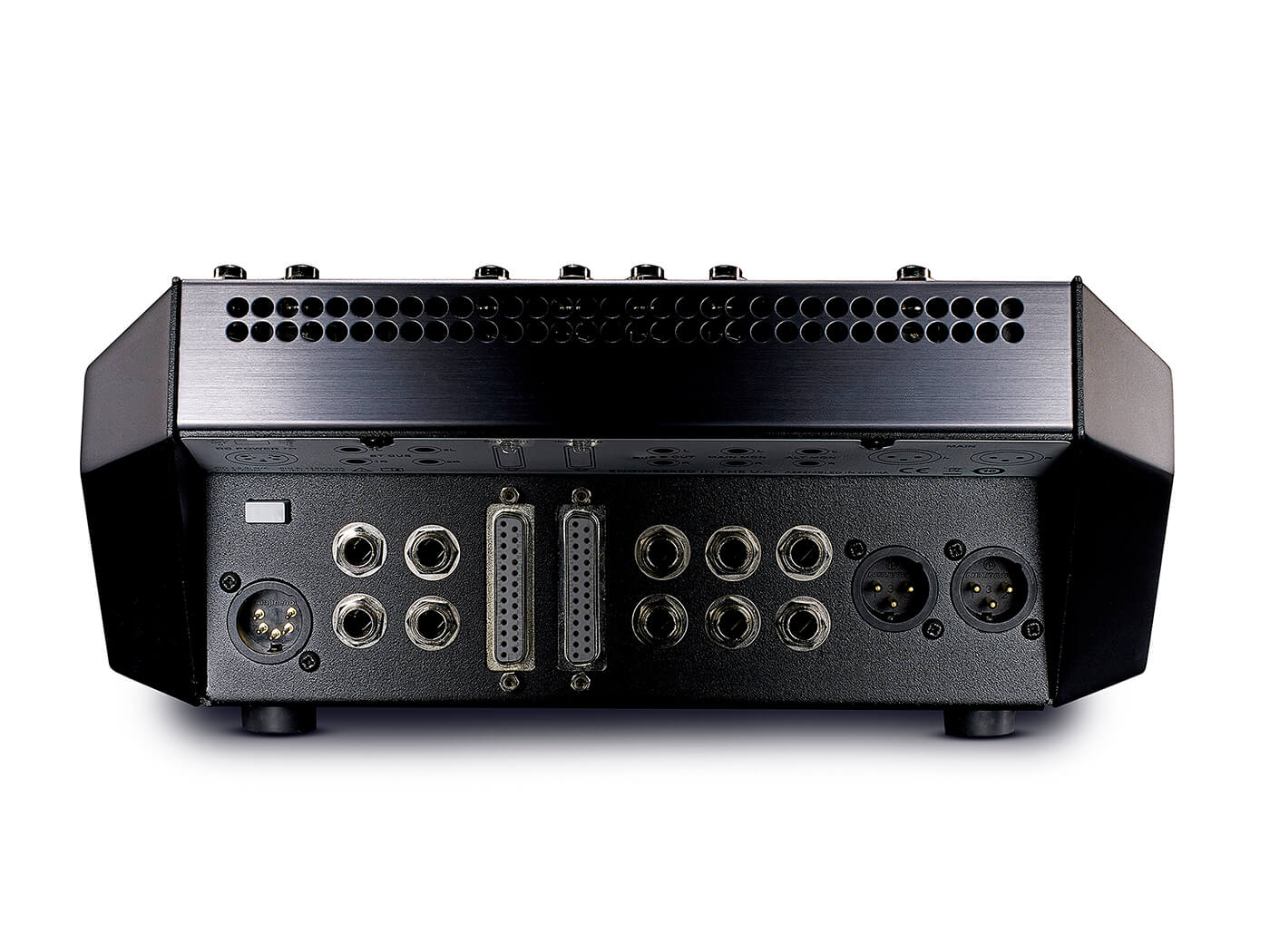 Outputs are all on the recessed back panel, which keeps the connectors neatly tucked away and safe from accidental damage. The main mix is carried on a pair of XLRs, while Bus B, the monitor busses and cue busses are on balanced jacks. SiX’s various insert sends and returns are connected via a pair of 25pin D-sub connectors, which also carry a duplicate of the Main mix and monitor busses, and alternate line inputs for the two mono channels (plugging a cable into the top-panel line input sockets overrides these alternate line inputs). The rear panel also houses the power input socket; the power supply itself is external, which keeps all of its nasty RF interference well away from SiX’s circuitry.

When a piece of pro-audio gear carries the Solid State Logic badge, it has a huge reputation to live up to; it heightens expectations and suggests that not a single corner will have been cut in the design and manufacture of the device. Conversely, when looking at a smaller mixer that is clearly intended for use in small studios and facilities, it’s natural to assume that its design will be a compromise between size, cost and quality, with the latter often losing out to the demands of the other two. And this is what makes SiX so shout-out-loud astonishing: within its humble enclosure lies the heart of high-end pro-studio mixing console, with features and quality of results to match.

The fundamental role of any mixing console is to route inputs to outputs – and so the more flexible this routing, the more useful the console. Here, again, SiX punches far above its weight, with professional-grade routing and monitoring options that would put even a mid-sized console to shame. This superb flexibility is reflected in the wide range of applications for which SiX is ideally suited.

For example, in the studio, or in a practice room or on location, SiX’s Recording Channels are perfect for conditioning an input signal. The SuperAnalogue preamps have a clarity that has to be heard to be believed, while the EQ and compression stages are designed specifically to allow gentle control and conditioning, so that the best possible sound can be passed to your DAW for recording. The two mix busses could be used to route signals to your DAW’s inputs; alternatively, the bypassable insert points allow you to hook up SiX as an inline desk, with a couple of channels of your DAW’s I/O inserted into the mono channel’s paths.

Swapping around a few cables and pressing a few buttons turns SiX from an input conditioner into a final analogue mixing stage, allowing you to mix stems from your DAW within the analogue domain and to incorporate the definition and ‘air’ that SSL’s SuperAnalogue circuitry reveals. The main mix insert point and G-Series buss compressor also lend themselves to this use-case.

With SiX, then, SSL has packed its world-leading console know-how and expertise into a compact enclosure that will fit anywhere and that can be taken anywhere; it has done this without compromising on quality or features. It’s pricey for such a small mixer, but not ridiculously so – and what you are getting for your money is a compact mixer that packs a huge punch, and that is 100 per cent SSL.

If your projects involve capturing live sounds, then you need mic preamps of some sort. Many audio interfaces come with at least one such input, but these are often simply ‘off the shelf’ circuits built for cost, not quality, especially at the home- and small-studio end of the market. But there are no such compromises with SiX’s SuperAnalogue preamps and it also allows further conditioning of the signal with its EQ and compressor.

On the other hand, if you work entirely ‘in the box’ and don’t record any acoustic sounds, SiX is still for you: feeding submixes through its analogue pathways to create a final stereo mix will inject a spaciousness and clarity that digital mixing can’t emulate. 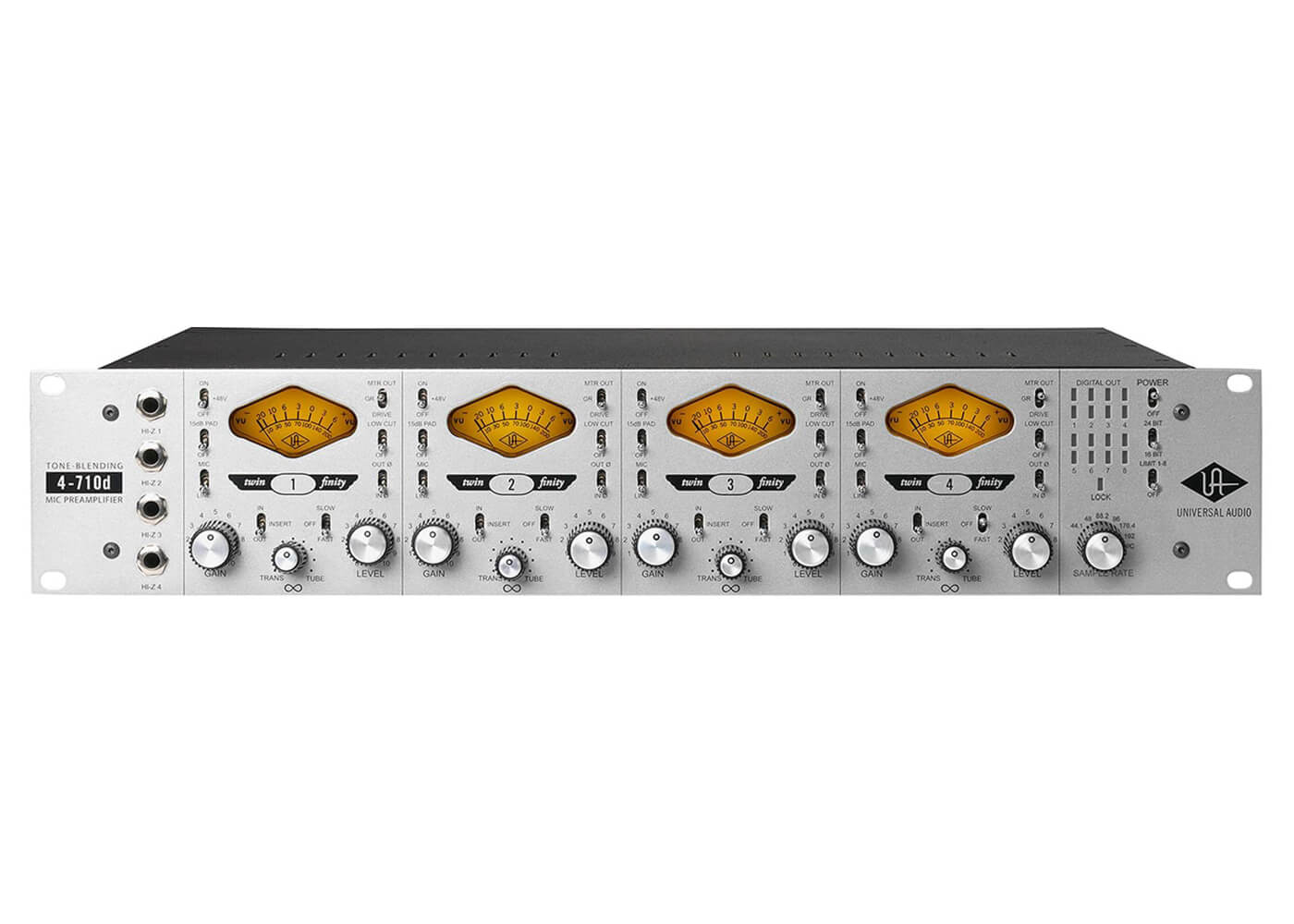 An option for input conditioning is the 4-710d, a rack-mountable four-channel preamp from Universal Audio. Its preamps use both tube and solid-state circuitry, and allow you to blend between the two. Each channel also includes a classic UA 1176-style compressor. The preamps feed an in-built digital convertor, too. 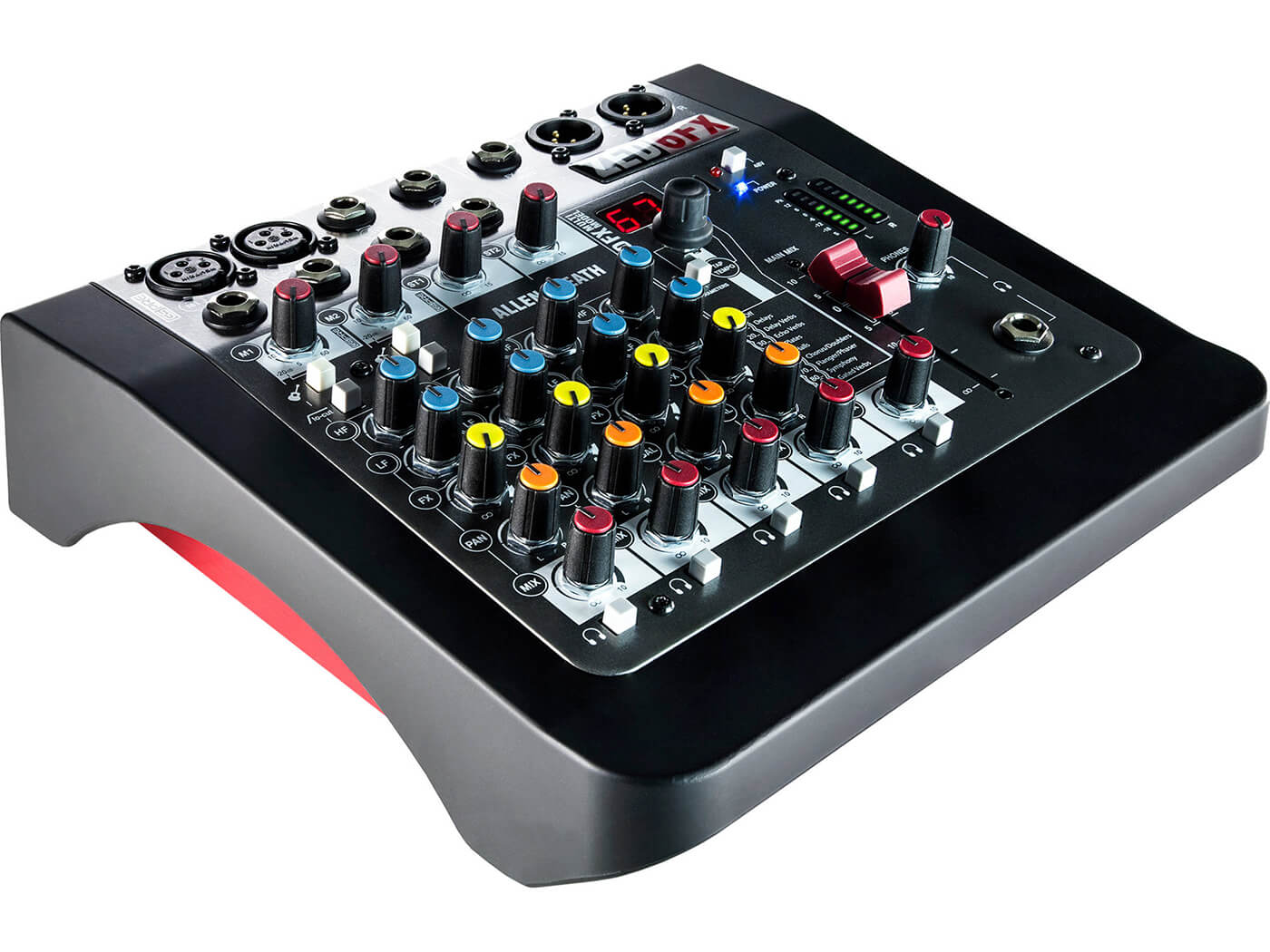 The 2x mono mic/line channels and pair of stereo channels in Allen & Heath’s ZED-6FX matches the input configuration of the SSL SiX and has both EQ and a send to an internal FX processor on each channel. It has none of the SiX’s routing and output functionality, though, nor SiX’s exquisite audio fidelity.