Solid State Logic builds out its 500-series module range with a sleek mono channel and stereo EQ. Can they live up to the brand’s studio legacy? 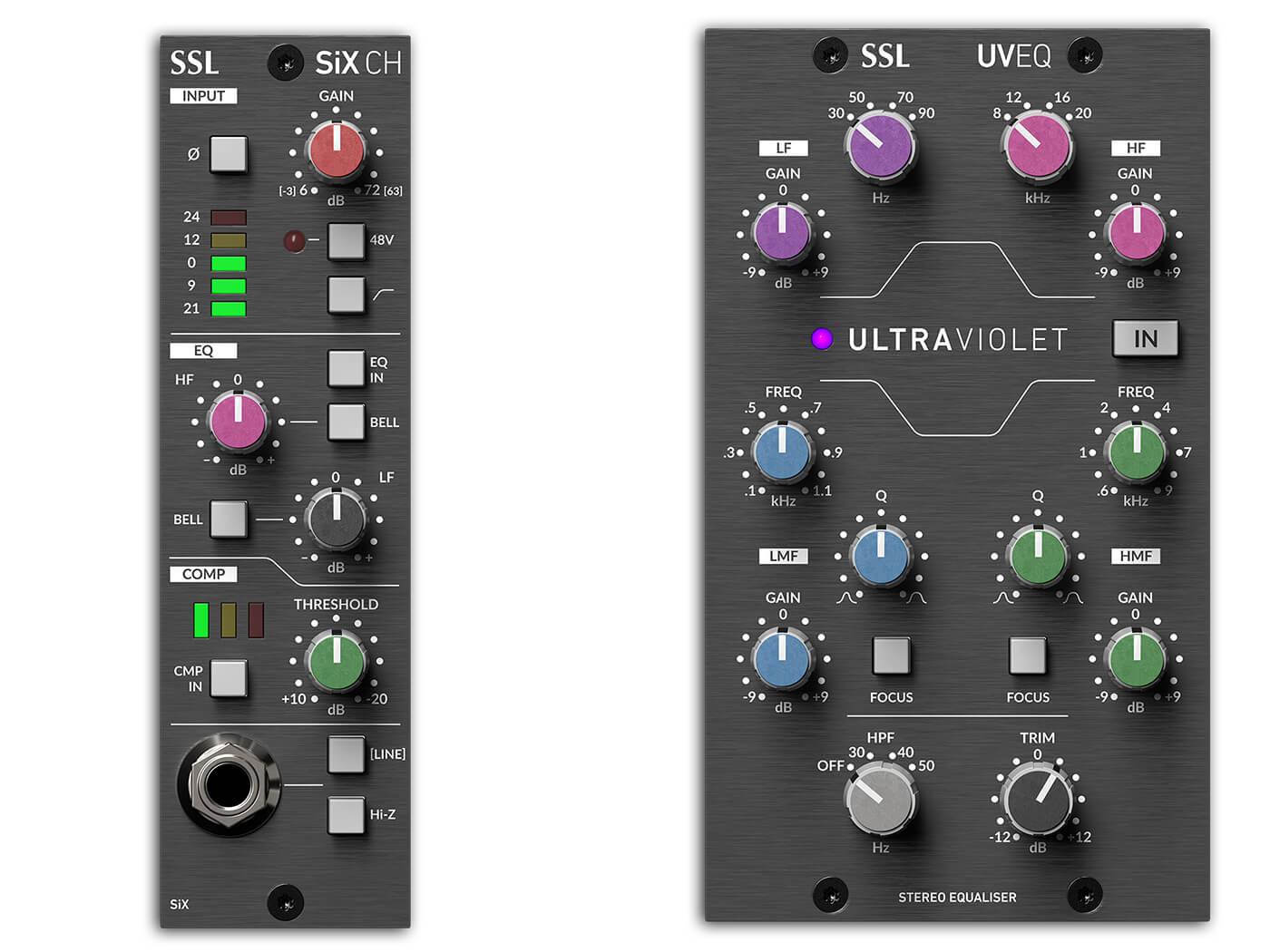 ⊖ No quibbles at all

Stereo equalisers don’t really come more comprehensive than the UV, which can solve pretty much any EQ problem you throw at it while also enhancing good-quality signals.
Two excellent products from SSL then, both of which deserve your attention.

Solid State Logic products have been at the forefront of first-class analogue signal processing ever since their automated mixing consoles revolutionised the recording world in the late 1970s.

SiX is a recording channel offering a slice of SSL’s proprietary SuperAnalogue sound, as heard in their large-format consoles, in a compact 500-series module. It’s a simple, elegant design comprising a powerful microphone preamplifier, 2-band broad-stroke equaliser and a no-fuss, one-knob compressor.

Alongside SiX is the Ultraviolet (UV) stereo equaliser, a fully-featured EQ designed for both creative sonic sweetening and forensic corrective surgery.

SiX provides up to 72dB of gain for microphones, which is enough juice for even the most insensitive designs such as ribbon mics. A TRS line-input socket on the facia offers a maximum of 63dB gain for instruments. A Hi-Z switch allows high impedance sources – such as electric guitars – to be inserted directly, with no need for a separate DI box.

While SiX is a highly intuitive and easy-to-use module, the UV EQ is a far more hands-on and involved processing tool. As a dedicated stereo design, as opposed to dual-mono, it’s ideally suited for use on stereo busses such as drum groups or even across the final stereo mix. It can also be used with single-channel sources but not two different mono signals simultaneously.

A four-band design, UV features selectable HF and LF shelving curves (8k, 12k, 16k and 20kHz / 30, 50, 70 and 90Hz) along with both high and low mid-band parametric EQ. This section incorporates SSL’s Focus mode, allowing precise control over the Q setting (bandwidth) to pinpoint and eliminate problematic frequencies. An output trim control is provided, which is useful to prevent overloading equipment further along the signal chain. 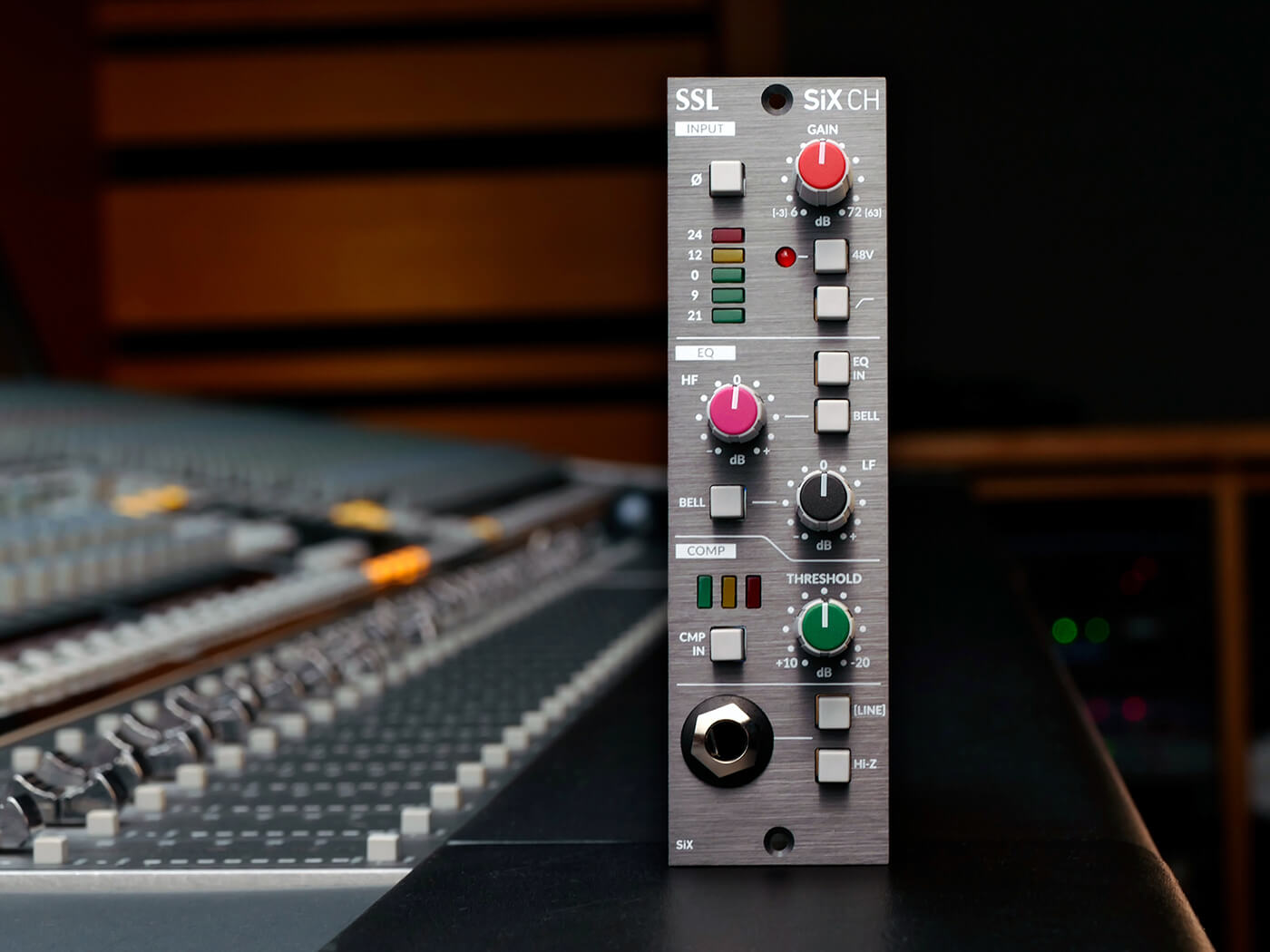 Impressed with the layout of both units, we connect our trusty AKG C414 ULS to the SiX channel to record some acoustic guitar. The preamp’s character makes itself known immediately, producing a full-range sound with impressive extension at both frequency extremes. A side-by-side comparison with our DDL AMR 24 console reveals the respective characteristics of each channel starkly, as they couldn’t be more different.

While the DDL presents a mid-forward sound, with the emphasis on punch and drive, SSL’s SiX is much smoother across the broad mid-band. Upper frequencies are notably sweet, with an almost valve-like sheen, expressing a harmonically rich treble character.

Following the preamp stage is a high-pass filter (HPF), a switchable 12 dB/oct design operating at 75Hz. This filter is engaged to usefully reduce low-end boom from our acoustic guitar. It’s also helpful to have the HPF ahead of the compressor to avoid excessive low-end content interfering with dynamic control.

With its foundations in SSL’s classic E series equalisers, SiX’s EQ section proper is nicely judged, offering both shelving and bell curves with well-chosen frequency points. In shelf mode, the HF EQ operates at 3.5kHz, which is ideal for bringing out presence in voices and instruments. The LF shelf is set at 60Hz, great for adding weight to kick drums and other bass instruments. This musical-sounding EQ is wonderful in boost mode, and while it will come in handy for broad HF or LF attenuation, this is where the bell-curve option may prove more useful. Here, the centre frequencies change to 5kHz and 200Hz, respectively, with the latter setting excellent for reducing low-mid muddiness.

Without the EQ switched in, the circuit is completely bypassed to not alter the tonal characteristics of the preamp. However, whichever way the EQ section is employed, it’s best used in moderation when tracking, leaving more drastic equalisation for the mixdown.
Moderation is also advisable when using the compressor. It’s a fairly gentle dynamics control in nature, not designed for creating dramatic, pumping compression effects, but its subtlety could lead to over-cooking if not used sparingly; an LED meter indicates the amount of compression. A single control for threshold is present, and that’s it for user adjustability. All other parameters are fixed, with a gentle 2:1 ratio and response times of around 5ms (attack) and 300ms (release). Gain make-up is automatic too, so signal level is maintained as the threshold is adjusted.

While the compressor and EQ are best used gently while recording, unless you’re willing to commit to a heavily processed sound, these sections can be used to fuller effect on pre-recorded sounds. 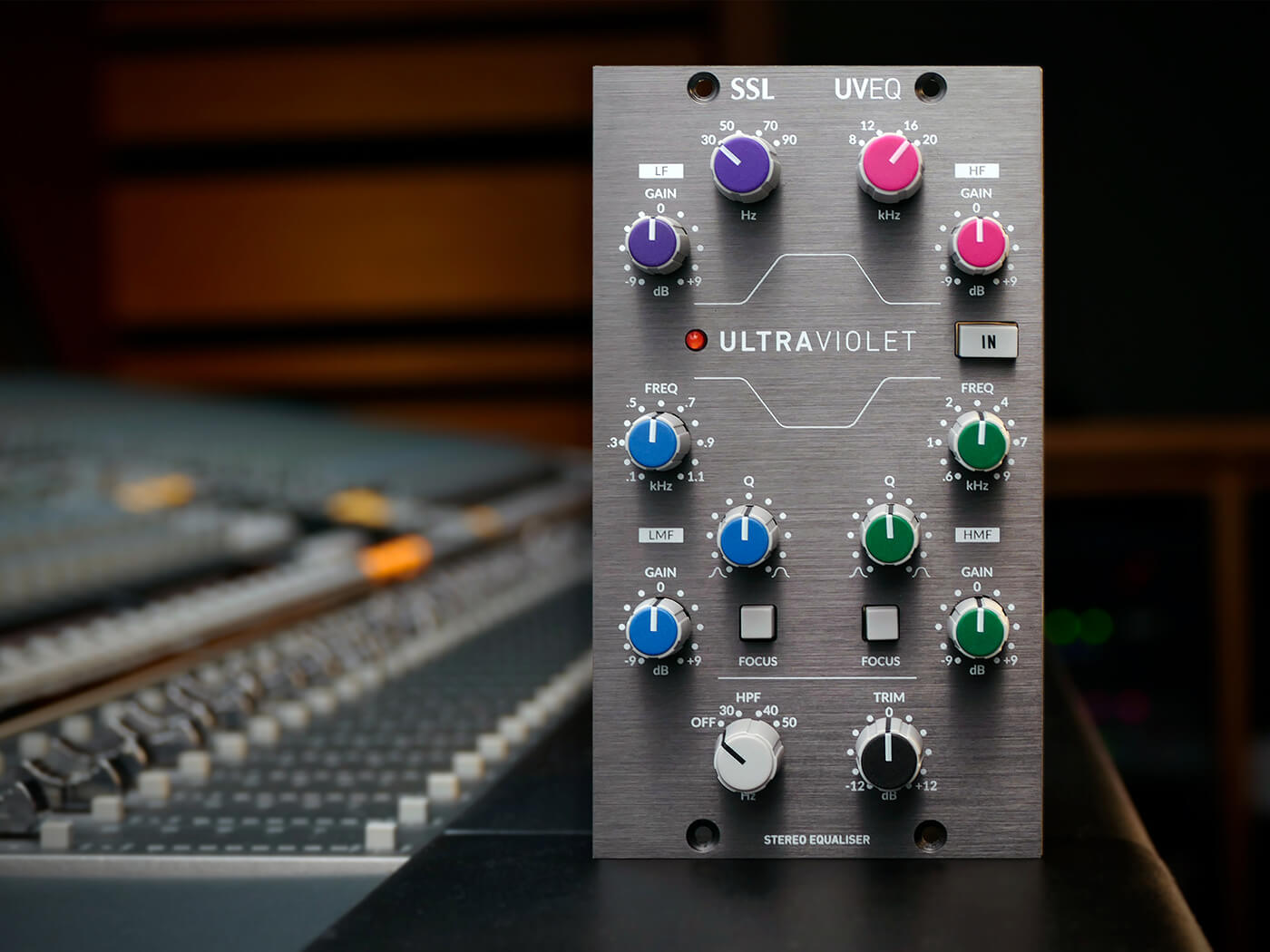 For no-holds-barred tone control, however, the UltraViolet EQ is an extremely powerful tool. Using SSL’s minimum phase-shift design, the UV EQ is brilliant as a master equaliser and equally excellent on any stereo or mono signal passed through it.

The LF and HF sections are, like those on SiX, shelving designs but far more comprehensive. There are 8, 12, 16 and 20kHz available up top, with 30, 50, 70 and 90Hz handling the low-end. We love the glorious top-end sheen and sparkle the 8 and 12kHz points produce, while the 16 and 20kHz settings add a halo of air and space rarely heard in solid-state designs. Our Thermionic Culture valve equalisers are the go-to units for this type of treatment, yet the UV EQ comes spectacularly close for sweetness and musicality. This is what creative EQ is all about.

The LF shelf also works in conjunction with the HPF to produce interesting curves. However, in practice, the ‘low-end trick’ where you combine a low-end boost with a low-mid cut is not possible by this method alone. That’s not a problem, though, as using the parametric mid-band section allows for just about any curve you wish to create.

This is due to the incredible amount of control over the width of the frequency band – the Q – available. Both the LMF and HMF sections feature variable Q control, while engaging the unique Focus switch reduces the bandwidth further. This makes identifying then eliminating problematic frequencies easy.

We tamed a spiky electric guitar part using full gain and sweeping through the high-mid frequencies until the offending tone rang like a bell. Once identified, we reduced the gain to produce a smoother tone.

In some respects, these two modules from SSL couldn’t be more different. The simplicity of the SiX Channel allows for quick tracking decisions, while the UV EQ offers a detailed, hands-on approach to both creative and corrective equalisation. Differences aside, both units represent the higher end of analogue processing in 500-series format.

The SiX Channel will appeal to those seeking a smooth, even-handed mic-pre with a deliciously sweet top-end response instead of the punchier larger-than-life character of 1073-style preamps.

Stereo equalisers don’t come more comprehensive than the UV, which can solve pretty much any EQ problem you throw at it while also enhancing good-quality signals. Two excellent products from SSL then, both of which deserve your attention.