Imagine a Eurorack sequencer where your programmed patterns develop and evolve – all on their own. Qu-Bit hopes you’ll agree that it’s a bloomin’ marvellous concept. 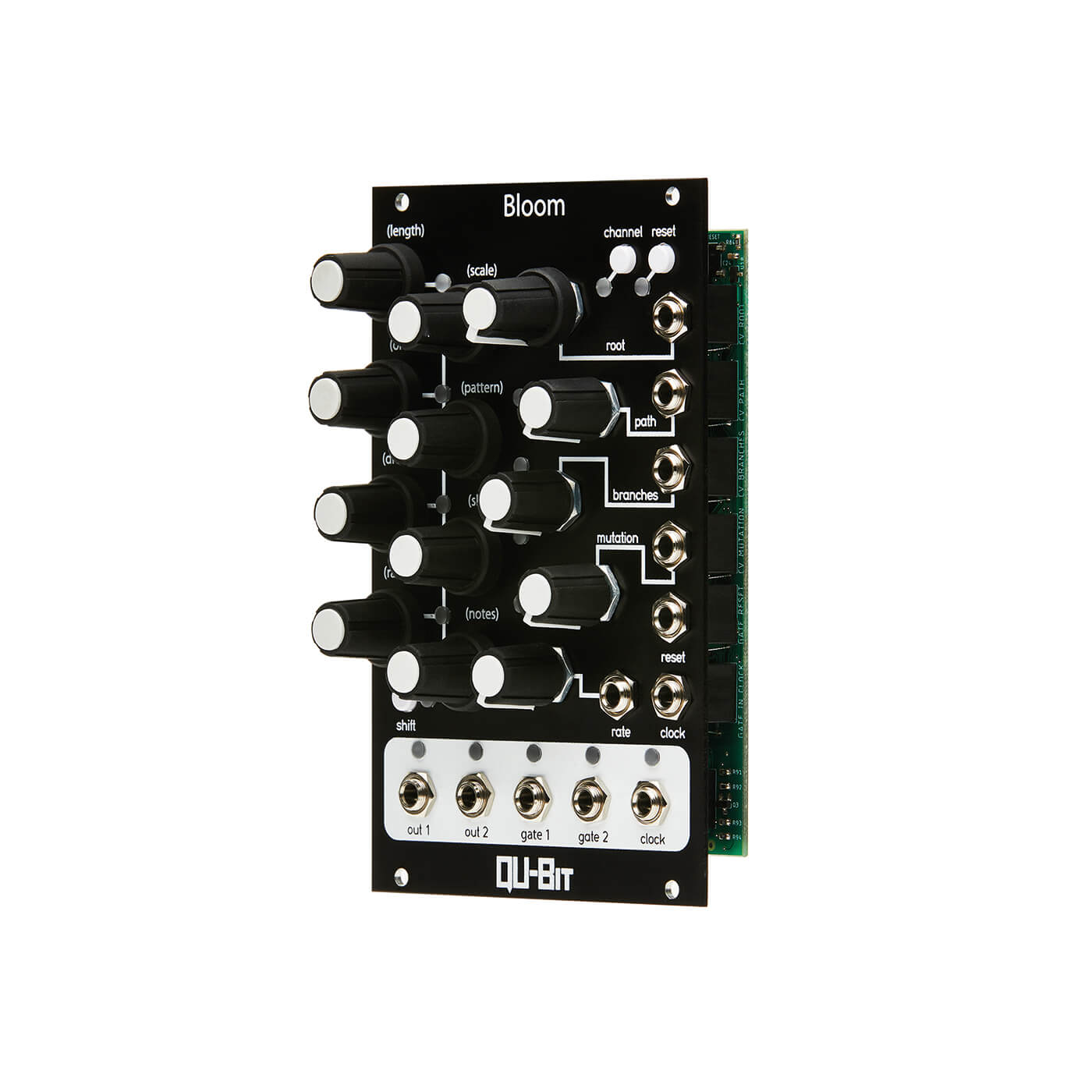 Whether you’re a newbie to Eurorack or a seasoned user, you’ll doubtless need modules within your system to cater for the sequencing of notes. It’s a common complaint from Eurorack users, performers and listeners, that while it’s very easy to exploit a basic sequence of limited length, it can often become boring for the listener, leading some to want to explore the use of CV sources outside of the Eurorack case, possibly from within a DAW. As a concept, this can be contentious with a view that by moving to an exterior device for more elaborate sequencing, you’re selling out.

The reality is, it’s very difficult to maintain interest when simply confronted by a minimal number of steps, so Qu-Bit has picked up the gauntlet, running with the challenge of starting with a limited number of sequenced steps that can easily and seamlessly evolve and mutate into longer forms.

Coming in at a sensible 16HP, Bloom is just the right size; it’s not too fiddly, even though it’s heavily adorned with larger-sized rotary encoders, with the occasional use of a small button or two, but thanks to some clear labelling and use of LEDs, Bloom is easy to get onboard with right from the first power-up.

In its most simplistic form, Bloom is a two-channel sequencer with CV and Gate outputs located at the bottom of the module. There’s also a Clock output, allowing for easy sync to other clock-based devices in your modular, although curiously there is no start/stop control. It’s also easy to get Bloom to follow external clocks thanks to a Clock input. There is nothing to stop you controlling the start/stop functionality from elsewhere in your rig, with the helpful inclusion of a reset button to place things back at step one, which can also be controlled from an external source thanks to a reset input.

Sequentially, the two available channels are switched via a dedicated channel button, at which point there is colourful endorsement as all the LEDs switch colour to signify channel 1 or channel 2. This means you can’t see both channels simultaneously, but it’s so easy to switch it’s not really an issue.

On the left of the module, two vertical rows of four rotary encoders allow for the dictation of note CVs, meaning that eight steps are on display at any given time. The basic sequencer is capable of programming up to a maximum of thirty-two steps. Each rotary encoder also adopts a legend, in brackets, which is kicked into life via the press of the ubiquitous shift button. It’s through this process that you dictate the number of required steps, which can be set from one to thirty-two, while other helpful factors such as choice of scale type or clock division are assigned in a similar manner by turning the corresponding pot. In all cases there is really helpful visual feedback, with different colours of LED, to prevent confusion that you might be adjusting some form of sequential data, pitch CV being illuminated in blue and green, depending on channel selection.

I manage to get this far pretty easily, without the need to download the manual, I even manage to apply slew (portamento) to the entire sequence, but once you start to move beyond these basics, you’ll probably need to get a bit more information. As an example, it’s possible to apply the slew on a per-step basis, with perfect 303 style aplomb. It’s not complicated once you know how, but I do find that I have to put down my cup of coffee on a couple of occasions, as I just can’t press the shift key and turn the encoder with one hand. Let’s face it, I’ll live, but it does mean that you’ll probably need to treat some operations firmly as a two-handed procedure. 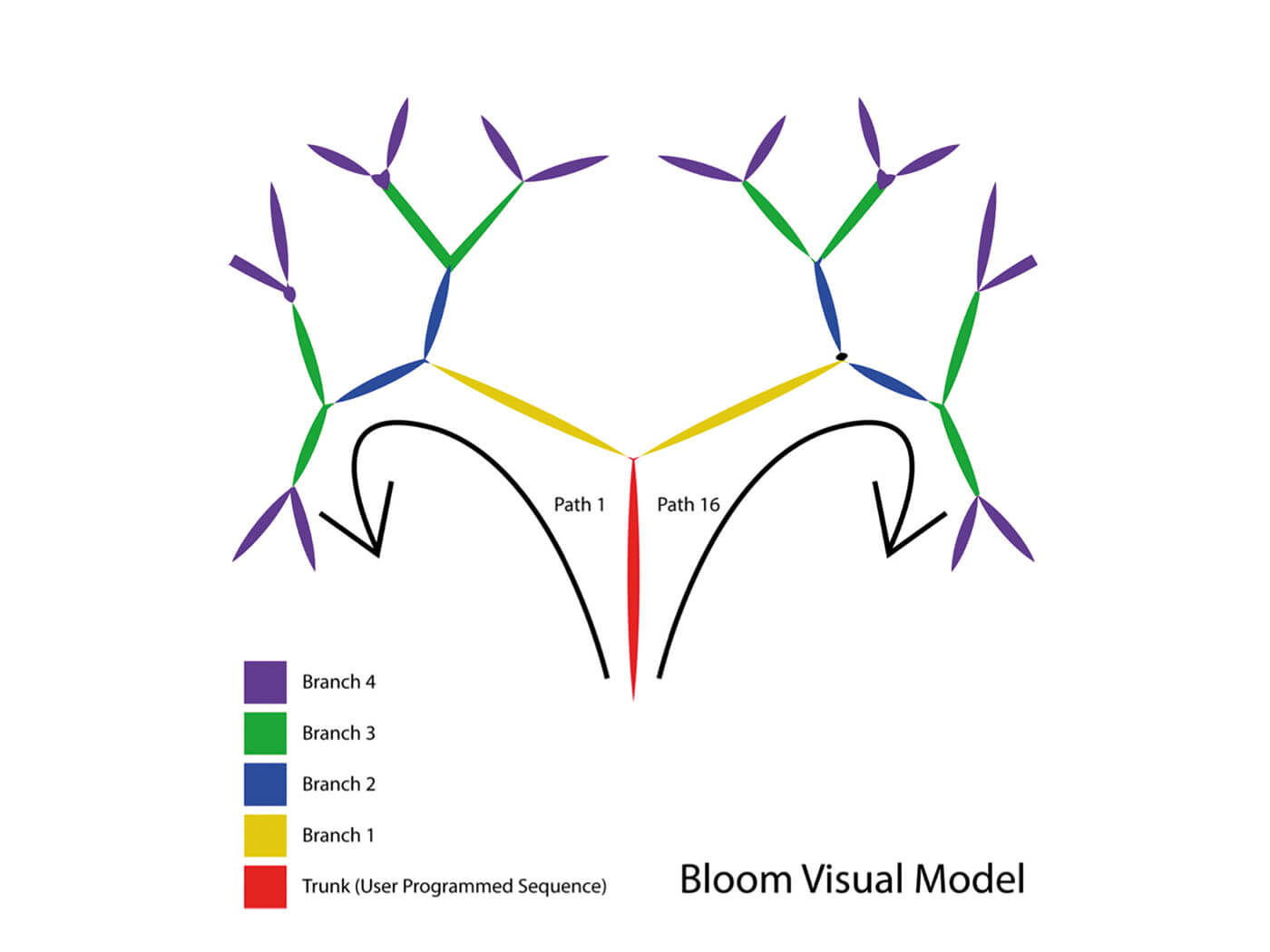 As a sequencer, I really like Bloom; it’s very easy to get on board with and even employs elements that have been considered favourites in other Eurorack based sequencers, such as per-step ratcheting/repeat functionality. Where it starts to get a whole lot more funky is with the fractal elements; Bloom seeks to employ the user programmed sequence in a similar manner to a tree trunk. From this basic construct, branches are formed, with mutations and differences occurring along the way as the initial sequence branches off in a number of directions. The result does hark back to the original trunk-based sequence, doing so by employing factors such as transposition, inversion or reversal. I would describe this as a sort of organised randomisation, which is one of my very favourite concepts within modular. A further Mutation function also extends and alters the sequence, with each parameter being applied by an amount that’s dictated via a dedicated pot, or placed under CV control.

I find this truly fascinating, even more so when I apply another random CV generator to these elements, which results in the randomising of the organised randomisation – if you get my drift! It can actually get out of hand very quickly, hence I find myself rowing back on many of these elements as the initial sequence could get to a point where it was on its own mission. Another aspect of this is also the number of steps, which will increase with further mutation up to a whopping 256 steps, but if it all gets too much it’s possible to go straight back to your initial branch-based sequence with the mere pressing of Shift and Reset. ‘Effective’ is a bit of an understatement as it’s so easy to create an enormous musical crescendo alongside other modular elements. There’s also the helpful ability to store up to eight sequences, which are instantly on call. It’s all rather beautiful. 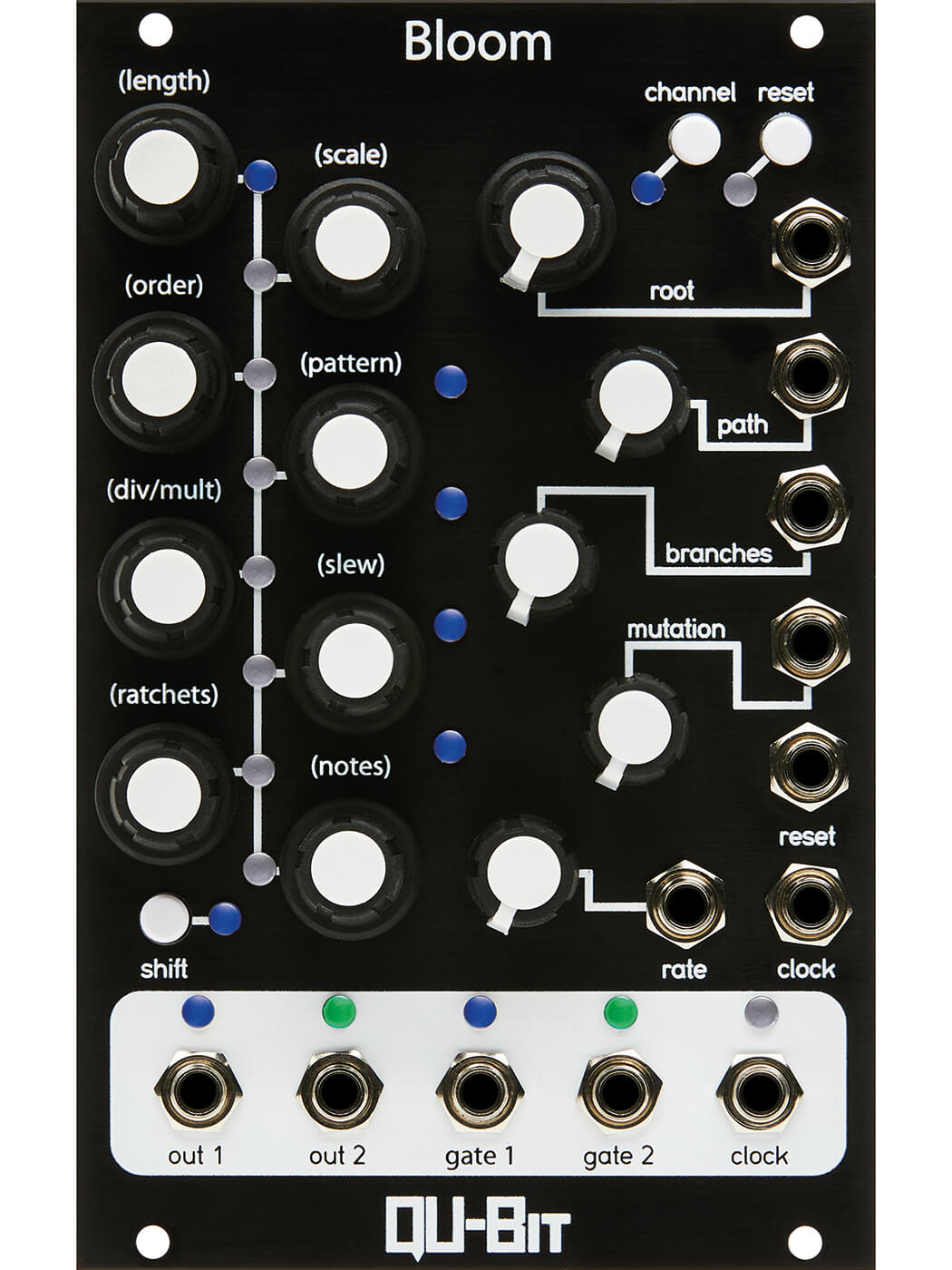 Bloom is best summed up as a module of two halves; on the one hand, it’s a really nice and easy-to-use 32-step sequencer that offers a beautiful sense of immediacy. It also has a real sense of Jekyll and Hyde, as Bloom’s other side is essentially a kind of wild animal that can be tamed to a degree, but will continue to grow and develop sequentially until you wish to put it back in the box and revert to your initial construct. Everyone in Eurorack loves randomisation, alongside traditional sequencers, and somehow this is the very best of both worlds.

Qu-Bit has always been tremendously good at making modules that offer plenty, but with Bloom’s interface, which is sleek and easy to use, it’s a hugely pleasurable and musical experience coupled with the company’s usual high-quality build. 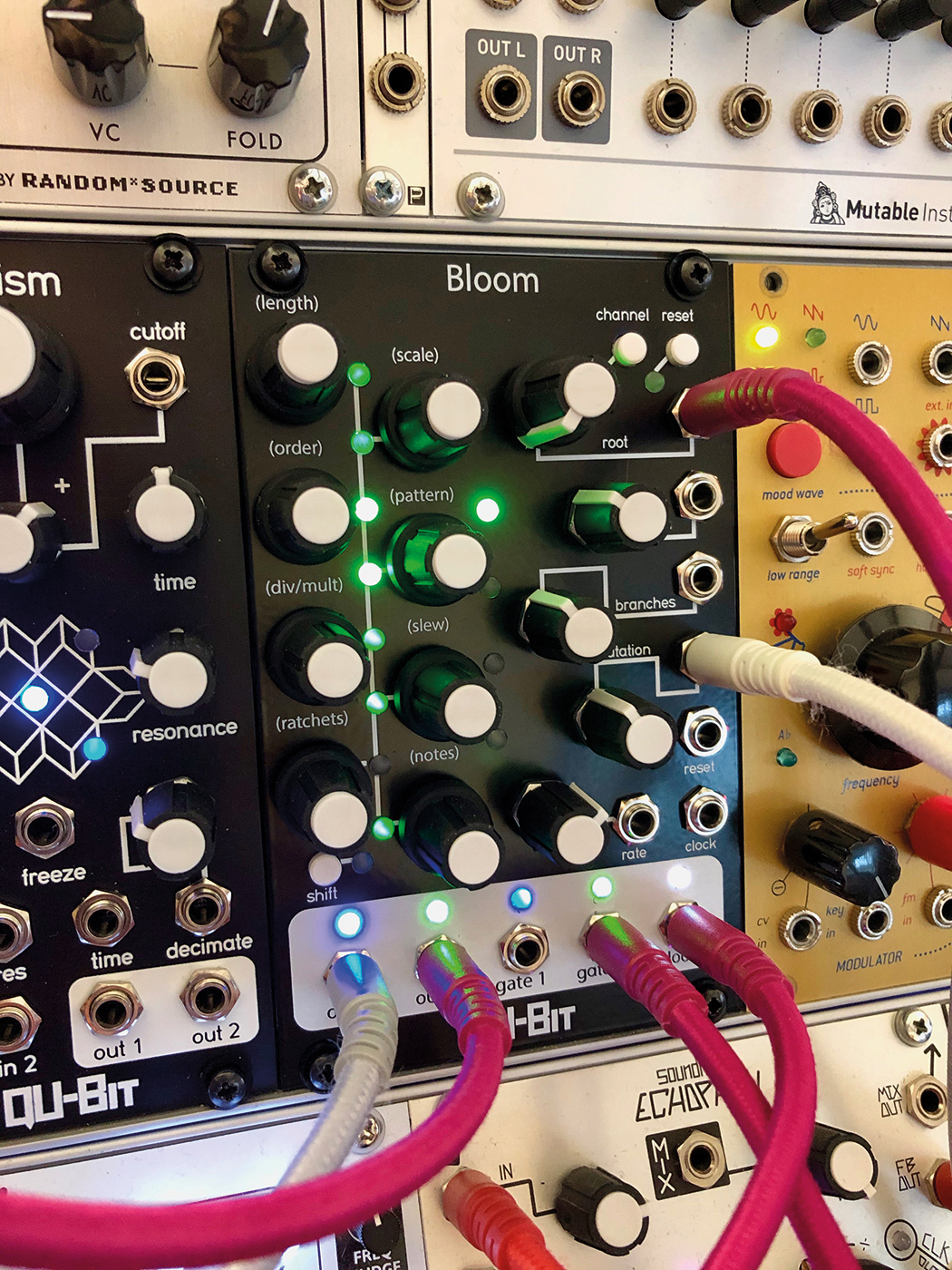 Bloom is a great module as a sequencer, as well as a module that can provide degrees of organised randomisation, which immediately means that it doubles in usefulness quotient. Qu-Bit’s elegant interface means that it offers an immediacy that we all yearn for in Eurorack, although some deeper operation will, at the very least, require a peek into the manual, but probably won’t be required on a regular basis thanks to its ease of use. The lack of a dedicated start/stop button may mean that some won’t wish to place this at the very heart of the system, but thanks to clock in and out options, this can be controlled elsewhere. It’s a very desirable module and one that would feel welcome in many systems where musical builds and randomisation are required. 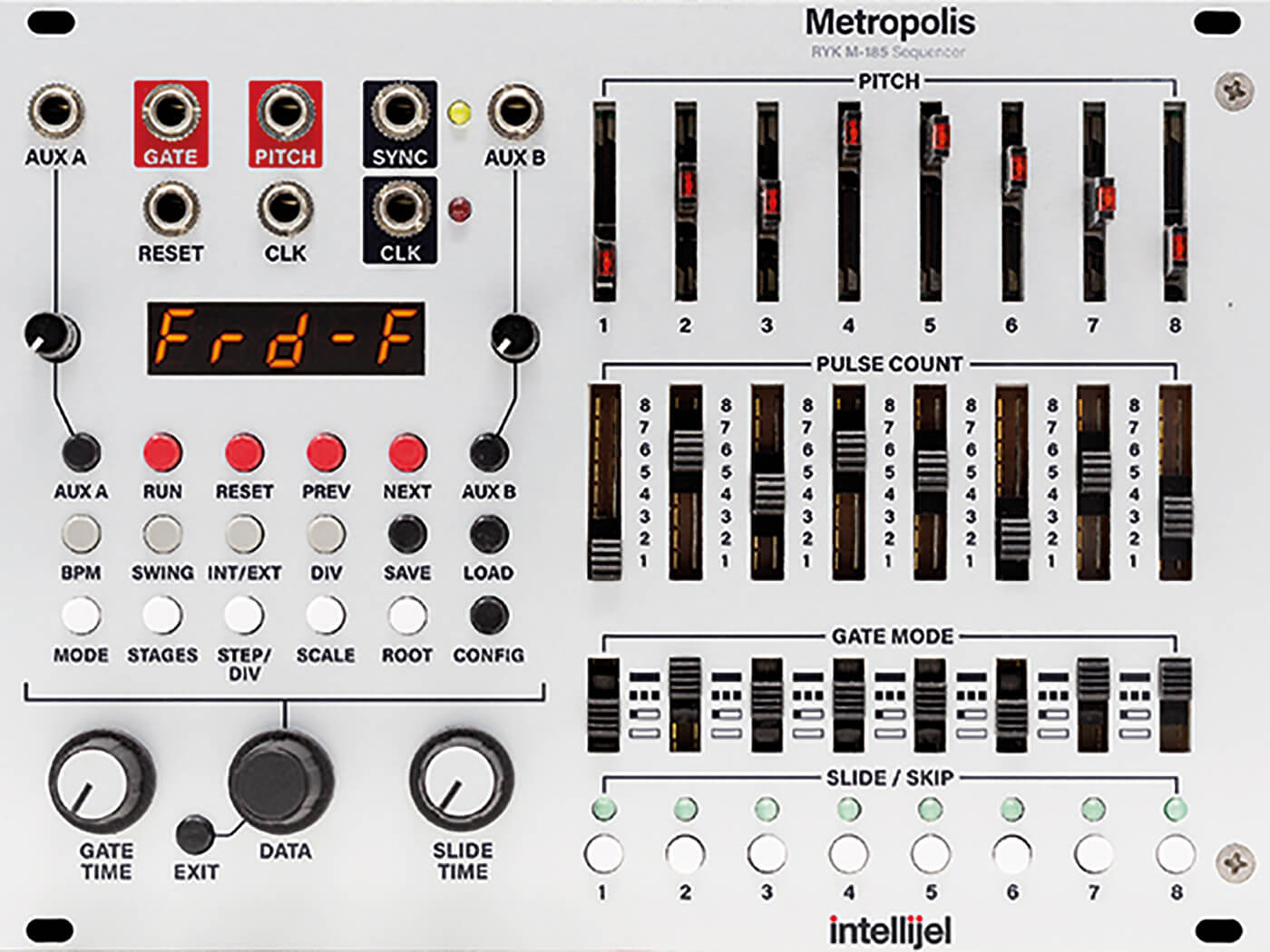 One of the most sought after Sequencers in Eurorack, the Metropolis offers eight-step sequencing with ratcheting of up to eight notes-per-step. It lacks the randomisation elements found in Bloom, but is an excellent single-part sequencer, perfect as the backbone to a system. 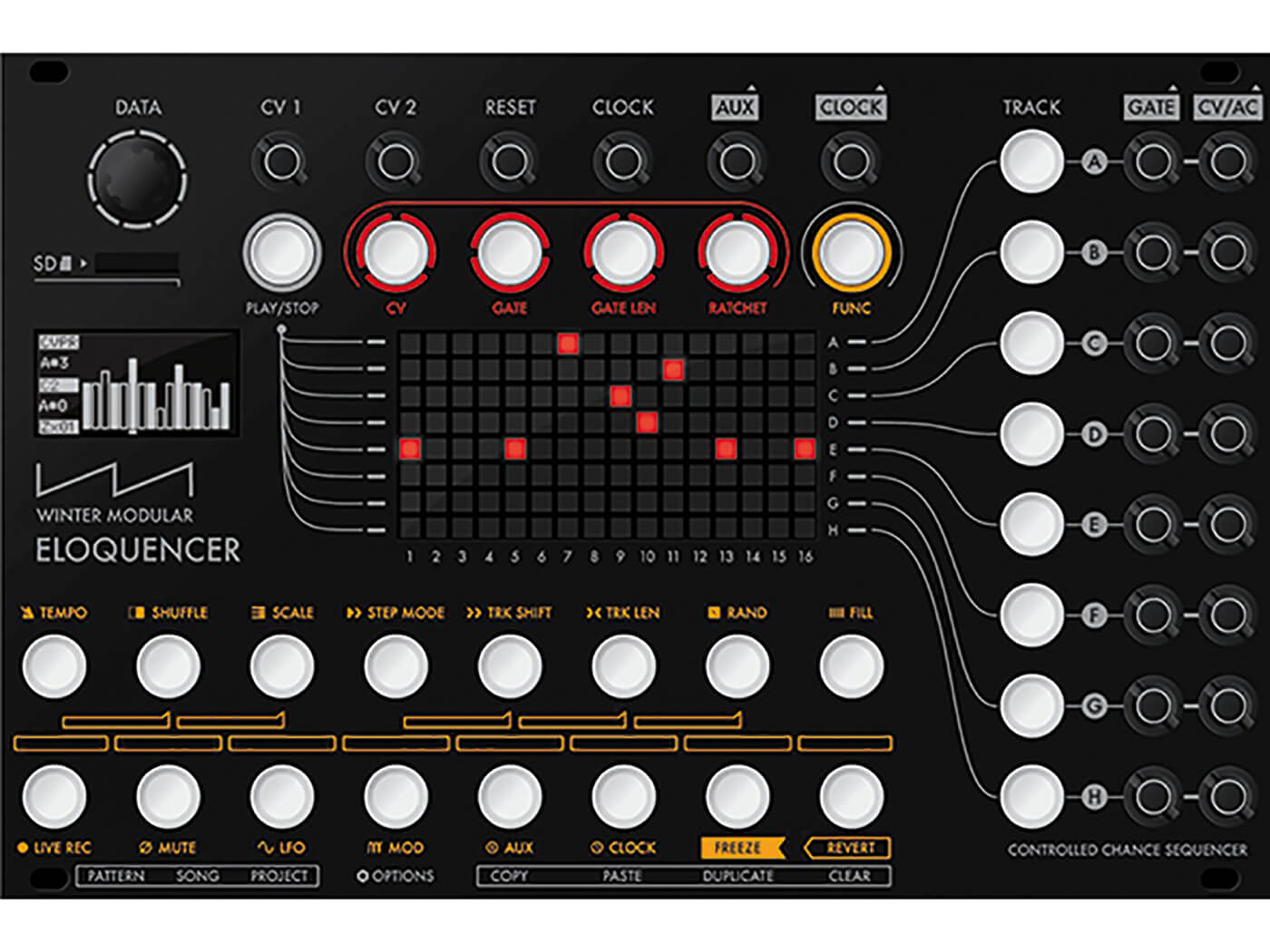 The Eloquencer is another Euroack-based sequencer stalwart that also features a degree of randomisation properties through its ability to partially or completely randomise patterns, while also offering up to eight-part sequencing.