It combines low-latency Thunderbolt performance with a resolve to simplify the recording process but does this keenly priced audio interface deliver? 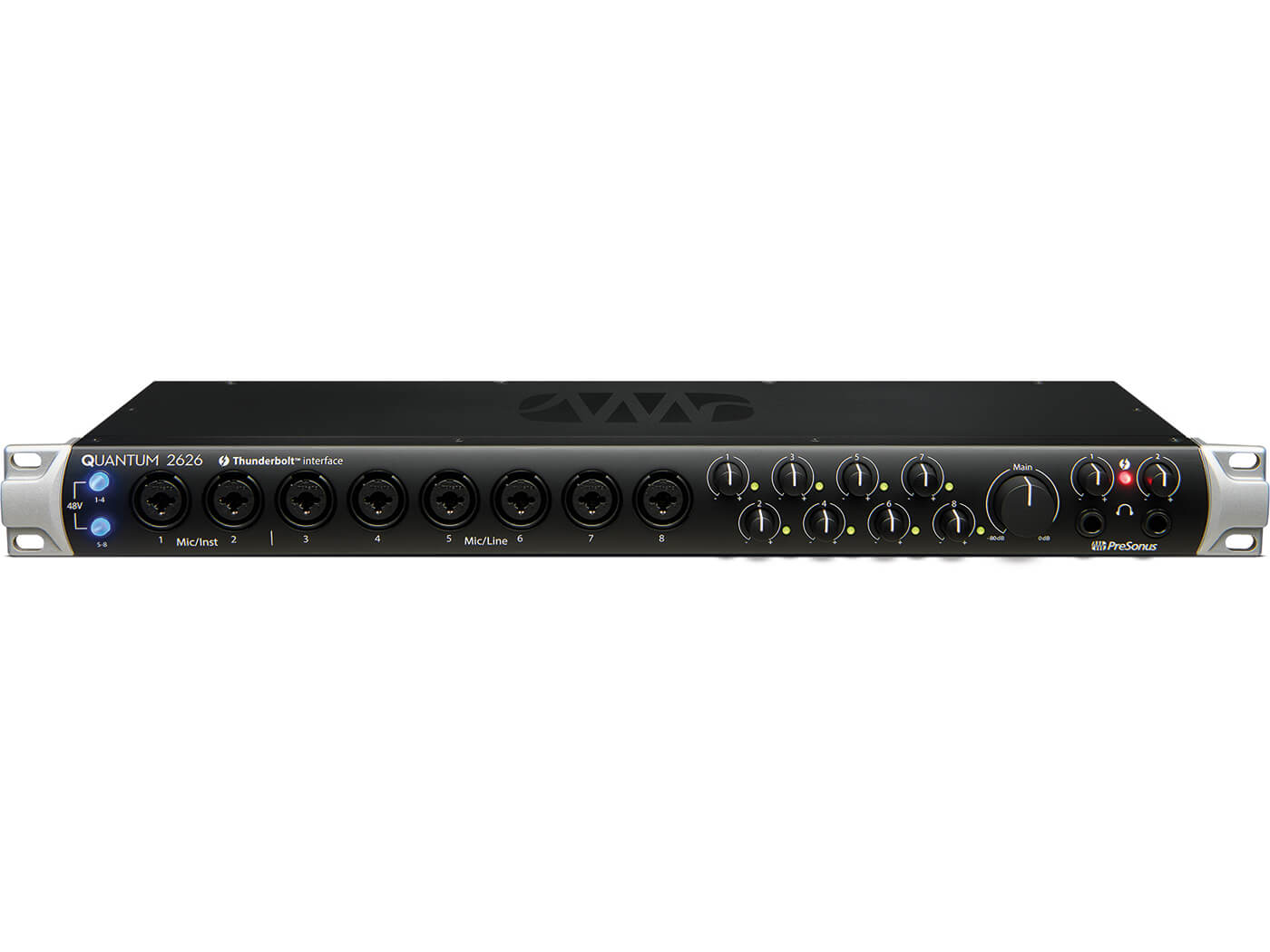 The Quantum 2626 follows on from PreSonus‘ much lauded Quantum 2632 interface, released a few years back. Ahead of its rich features and respectable audio quality, discussion surrounding the original Quantum mainly focused on its progressive way of working, whereby instead of being able to choose between monitoring input signals at source and/or monitoring through software, the hardware monitoring was removed.

The ultra-low latencies possible with a Thunderbolt connection eliminated the need for additional mixer applications outside the user’s DAW, simplifying the recording process by some margin and offering greater value for money, since fewer converter arrays were required. Such a move precluded any form of standalone operation and monitoring of inputs, however, which proved a deal-breaker for some.

This year’s Quantum 2626 is a streamlined version of the earlier flagship model, offering similar headline features but at reduced cost. Gone is the detailed LED metering, the digitally controlled preamps and the monitor-controller functions of the first Quantum. What remains is the focus on the lowest possible latencies, plus a wide range of ins and outs, including the lauded XMAX mic preamps.

Thanks to its neat matte-black finish – a design aesthetic reminiscent of the Apogee Element – our first impressions of the new Quantum are extremely positive. The front panel controls are solid, with smooth action on each of the pots and cool blue LEDs beneath the two phantom-power switches. The eight combi XLR/jack inputs appear around the front, and are helpful for the regular switching around of input sources, particularly when mounted in a rack.

The first two inputs offering either mic or instrument levels, while inputs three through eight alternate between mic and line, depending on the type of connector that’s plugged in. Preamp gain controls appear next, and sport simple tri-colour LED metering to show activity and clipping on each input channel. Unfortunately though, that’s about it – there’s no pad and there’s no high-pass filter here, in either hardware of software form.

Further along, the main knob acts as a level control for the main outs, crucial for cutting monitor speakers while recording and monitoring in the same room, since all live inputs have to be monitored through software and so are always linked to the main outputs and headphones. It’s a shame that the knob cannot be set to control the level of multiple pairs of outputs at the same time – for a 5.1 surround set-up, for example – but you can’t have everything.

Dual headphone outputs complete the front panel roster, alongside a Thunderbolt connection status LED. The headphone sockets both carry exactly the same mix as the main outs, since they don’t have independent DACs; independent headphone mixes would therefore require the use of pre-fade sends from the user’s DAW, with external headphone amps plugged in to further pairs of line outs.

Around the back, you’ll find the typical array of connecters covering TRS jack line outs, ADAT ins and outs, MIDI and word clock. But there are a few points of note. On the positive side, a pair of insert points (labelled Preamp out and Line return) are included for the first two inputs, so outboard effects units can be plugged into the input chain after the preamp or for external mic preamps to be used without the signal ever hitting the onboard ones (by plugging straight into the line returns).

On a decidedly less positive note, safely tucked away at the opposite end of the rear panel is the power switch. How PreSonus expects users to turn the unit on and off while mounted in rack, we have no idea. This dodgy decision somewhat undermines the great work invested into making the input connectors readily available around the front.

Only a single Thunderbolt port is present here too, making it far more challenging to take advantage of device daisy-chaining, particularly if you have a notebook with only one or two Thunderbolt-compatible ports. Following the lead of other makers, there’s no computer connection cable included in the box. Sure, some users might need additional adapters to use with legacy ports but the vast majority would use a Thunderbolt-compatible USB-C
lead. It makes you wonder whether such cost-cutting is a false economy. Couldn’t manufacturers do better to avoid this raft of support issues and customer frustration surrounding the minefield of cables that look the same but have very different capabilities? Just give us a cable and raise the price a little if you really must.

Getting started is simple. After registering the product online, all the available software (the drivers, Studio One and the bundled plug-ins) is presented on a single page. We’ve always been impressed with what’s offered by the lowest Prime tier of Studio One, so the Element version included with the Quantum is a bonus, providing even more in the way of software instruments and samples, plus important mixing tools such as Aux Channels. The bundled Studio Magic plug-ins mustn’t be overlooked either.

Highlights include a basic Lexicon MPX-i reverb, a Klanghelm tube emulator and a smooth UVI Steinway-sampled grand piano. For added punch, there’s also SPL’s Attacker Plus, essentially one half of the popular Transient Designer. While the PreSonus software is all straightforward to install, nabbing freebies from the Studio Magic bundle requires a lot more perseverance; at the end of the process, we have a multitude of new user accounts and have been educated in the differing ways software manufacturers authorise plug-ins.

With Logic Pro set up to record input from a mic, and triggering the UVI piano plug-in, it’s easy to get underway. With a comforting reverb added on an aux send, we’re able to monitor and record with negligible latency at buffer sizes of 32 and 64 samples, the DAW reporting just 1.1ms output latency and 2.0 round-trip latency at the lower buffer setting (with a 44.1kHz sample rate). Higher sample rates of course yield even lower latencies. We experience small interruptions in the UVI Grand audio stream when monitoring at the lowest buffer sizes, and are forced to switch to 128 samples to cure the problem. 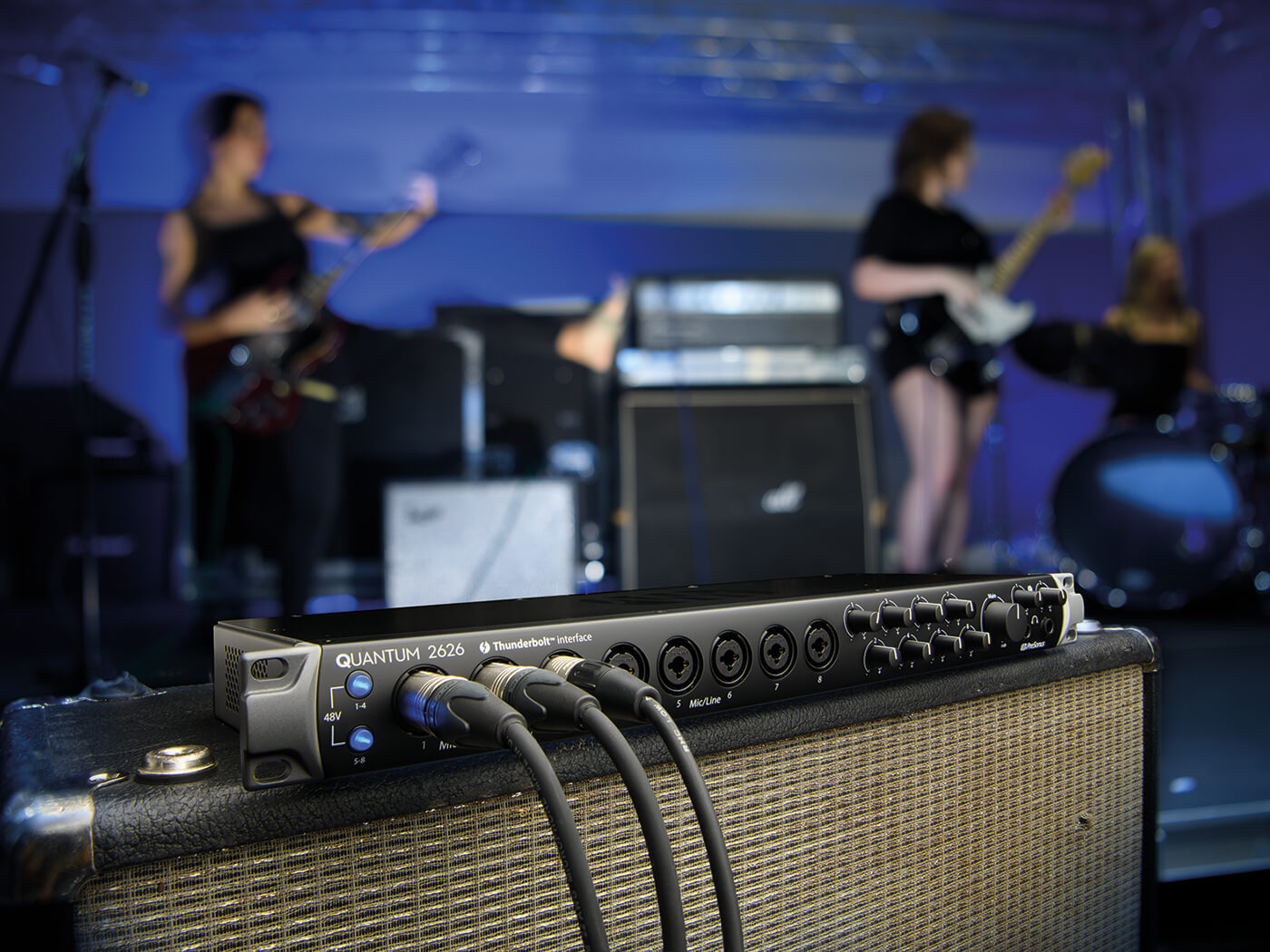 At this level, we start to feel slight latency on the mic. But it’s a level many users would still find acceptable. Others would need to search for creative ways of monitoring without the latency – for example, temporarily using leaner software instruments at the tracking stage and/or freezing already recorded tracks.

Working with Studio One, it was all plain sailing, the DAW’s clever native low-latency monitoring system helping to variably apply small buffer settings to live inputs and larger ones to tracks playing back to avoid latency or drop-outs. For those who want to record audio and are not bothered by latency, it makes sense for Studio One to be your go-to DAW, at least at the tracking stage, even if the mix takes place elsewhere. The preamps and converter quality is truly superb, with the DACs producing an open sound on playback with plenty of high-frequency air that doesn’t come through on entry-entry converters. The headphone amps are tremendously loud too.

This is a fantastic unit and, when using software monitoring exclusively, it remains as easy to use as its predecessor. But the stripping of features from the preamps and studio/headphone monitoring found on the more expensive Quantum might constitute a cut too far for potential buyers. 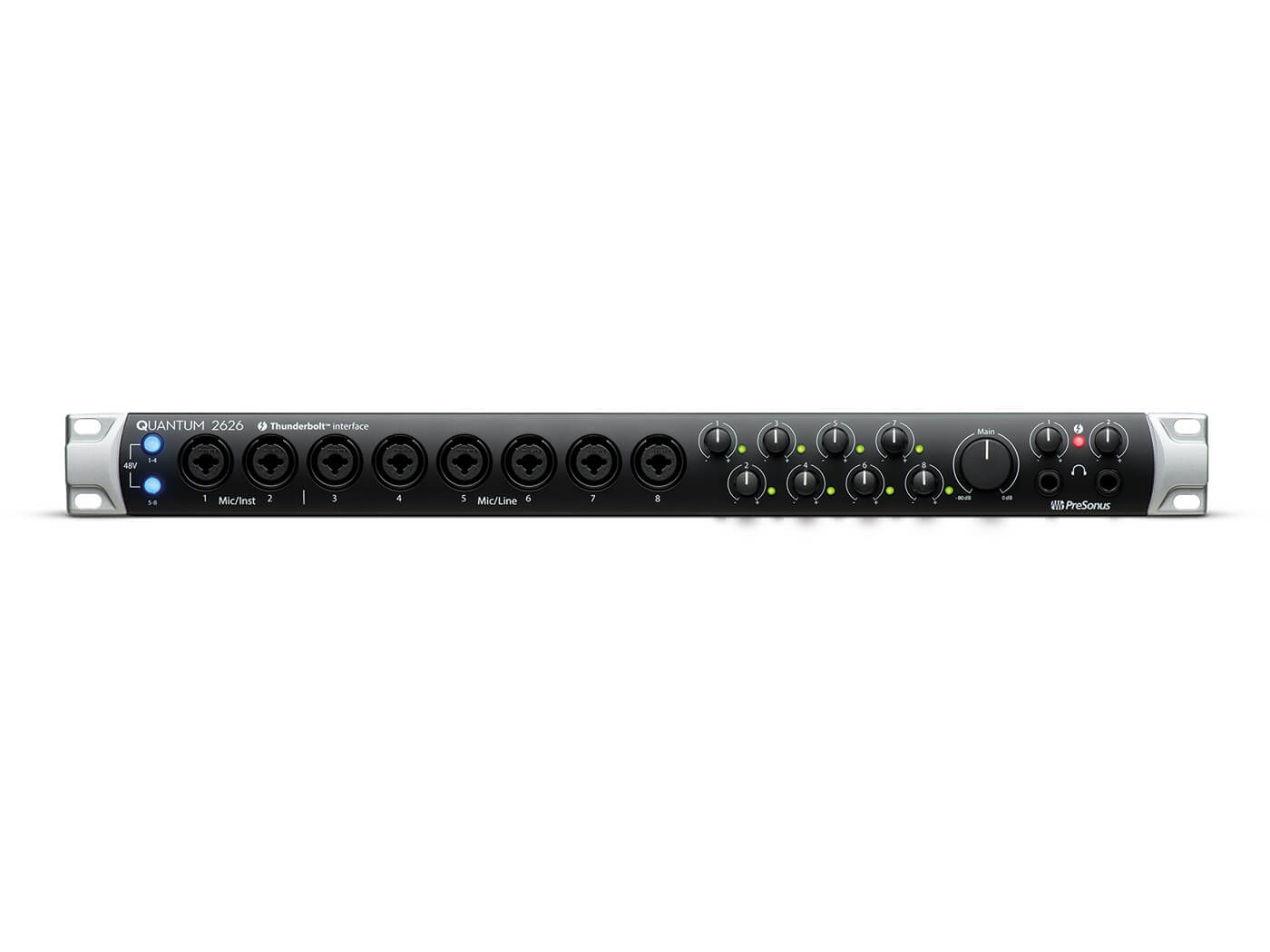 For those searching for a simple way to track eight (or more) microphones, while enjoying low-latency operation of software instruments, the Quantum 2626 should be near the top of your list of audio interfaces to consider, particularly when partnered with Studio One. With simple expansion by way of the ADAT inputs and 8-way external preamps, it’s possible to record 24 simultaneous analogue inputs; perfect for jobs such as tracking a band’s rhythm section.

The lack of dedicated headphone DACs and the bare-bones preamp and monitoring may put some off but at this price, the unit is hard to beat. The bundled software is superb too. There’s bound to be something useful to everyone. The Quantum 2626 truly offers almost everything you need in a 1U space.

The most recent incarnation of the 828 line is compatible with Windows, macOS and iOS, and has more comprehensive metering and monitoring than the Quantum. Plus, there’s the possibility to expand.

Apogee’s Thunderbolt 2 interface has similar features to the Quantum 2626, even omitting hardware gain controls and meters but in turn benefiting from digital control and enhanced preamp features.