Though it’s essential for all studios, finding monitors that can automatically adjust for our often imperfect studio spaces isn’t always easy. With PreSonus’ latest though, look no further. 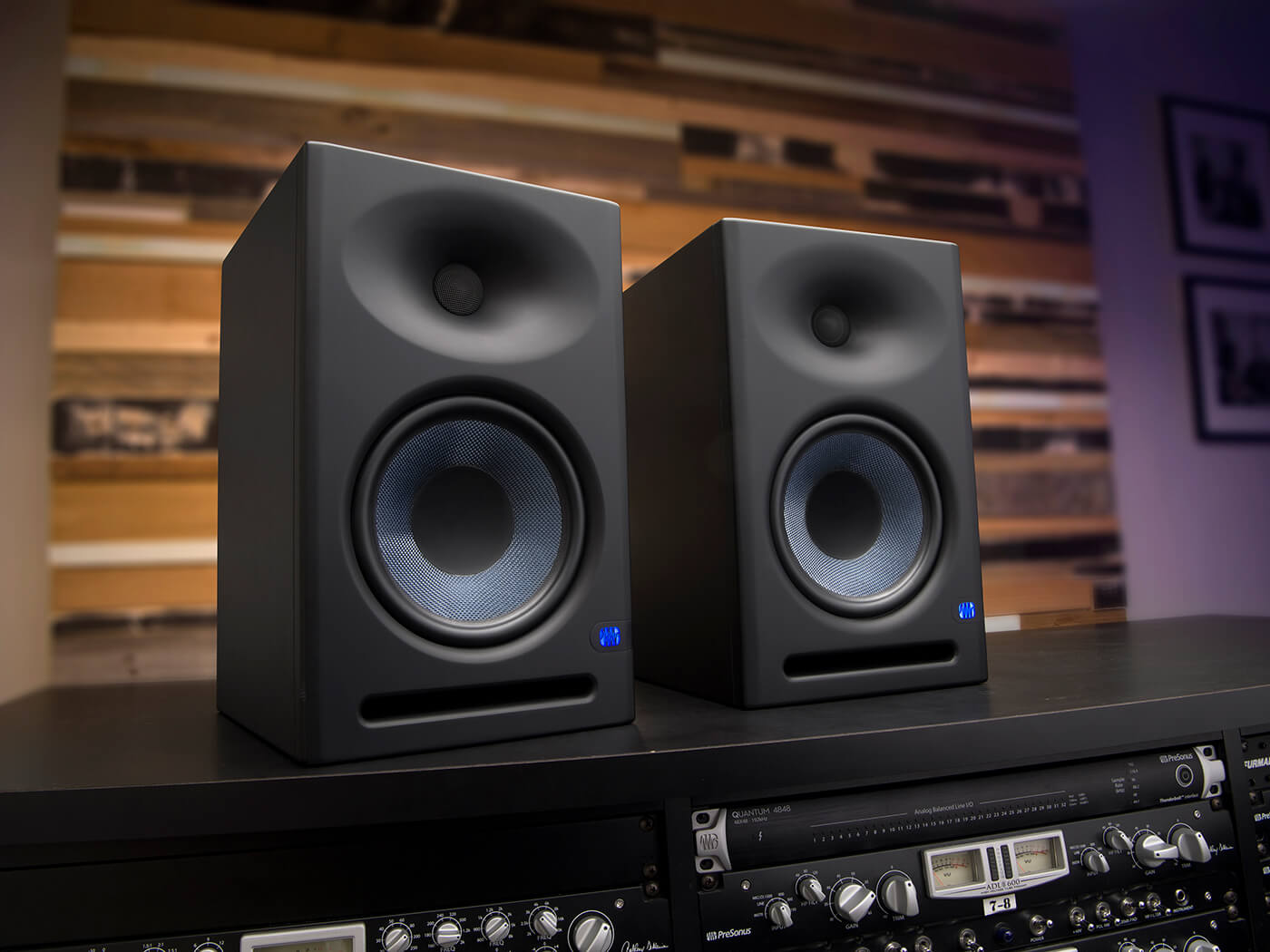 It’s been six years since we examined the entry-level Eris series from PreSonus. Now the company has given its best-selling range a makeover. The most obvious improvement on the old models is the inclusion of an elliptical waveguide, which provides a wider yet more controlled sweet spot, perfect for collaborative mixing sessions.

On test here are the largest monitors in the series, the Eris E8XTs, which features an eight-inch mid/bass driver coupled with a 1.25-inch (32mm) silk-dome high-frequency transducer. Like the vast majority of modern monitors, the Eris is a powered design with built-in amplifiers, and these produce a generous 140 watts of Class A/B amplification.

The E8XTs are capable of playing loud and their generous output, in terms of both volume and frequency range, are best suited to larger rooms. However, all is not lost if you crave that large-scale sound that many smaller nearfield designs struggle to achieve, as comprehensive user-adjustable controls allow the monitors to be tuned to compensate for less than ideal work spaces. 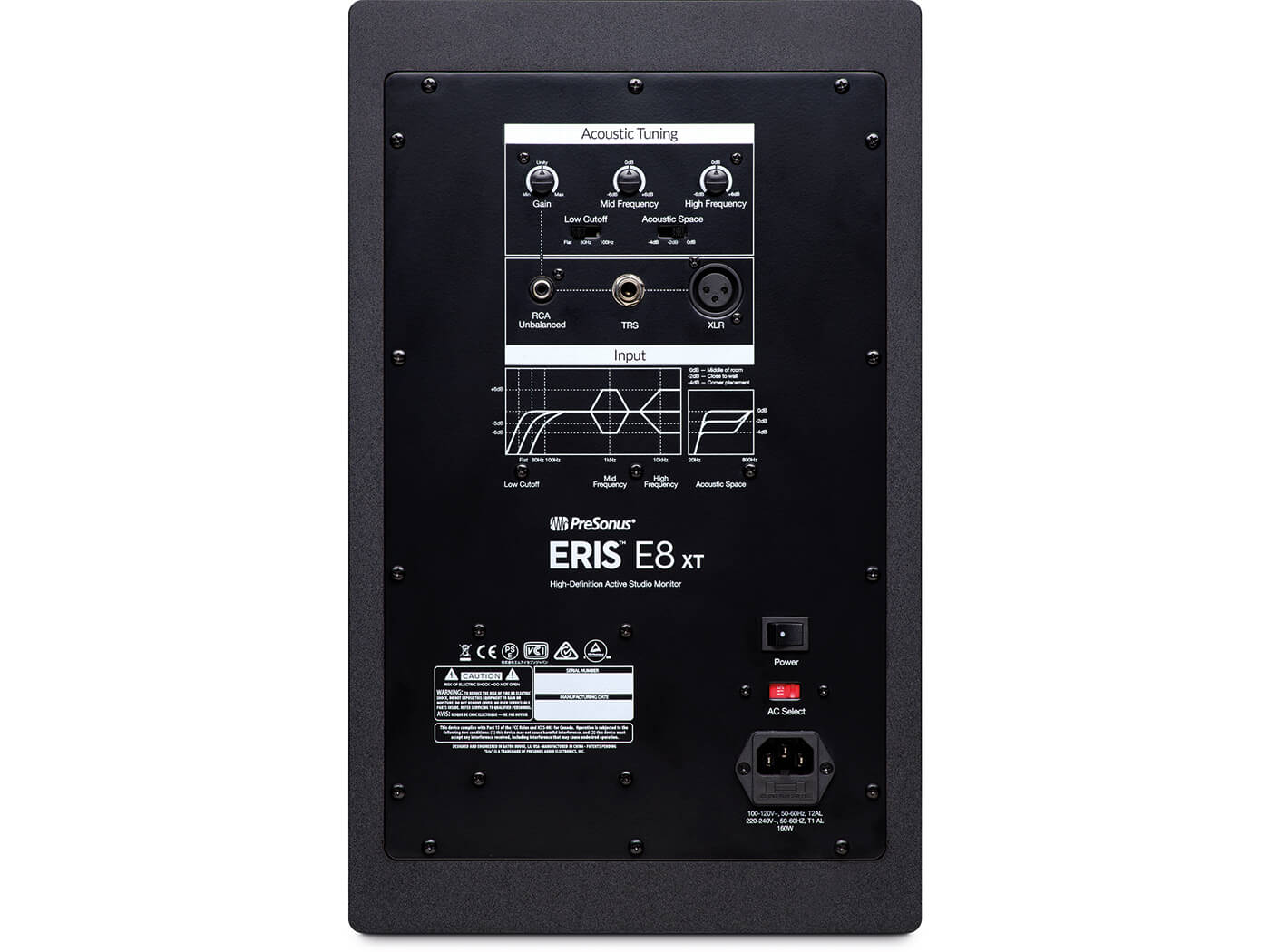 By far the most interesting of the E8XTs’ adjustable settings is the Acoustic Space control, which reduces the level of frequencies below 800Hz by either -2dB or -4dB to compensate for the bass bloom that occurs when monitors are sited close to a rear wall or corner. Low-frequency output can also be tailored via the low-cutoff switch, which rolls off frequencies below either 80Hz or 100Hz with a slope of 12dB/octave. Aside from tuning the LF output to suit the room, this control is useful when mating the E8XTs to a subwoofer.

High frequencies can be boosted or cut by +/- 6dB with a shelving EQ set at 10kHz. A continuously variable pot (with a useful indent at the centre ‘flat’ position) allows for exacting levels of HF boost or cut. However, care must be taken to precisely set each monitor identically. A similar pot is provided for midrange control, though this time the EQ is a peaking design, affecting a two-octave frequency band centred on 1kHz.

All of these controls appear on the rear panel, along with a gain control (again, continuously variable with an indent at Unity Gain), as well as all connection sockets. The user manual explains in detail how to adjust the gain to calibrate the monitors “using 85dB SPL ‘standard’ reference” for optimum performance within your studio, and provides several handy tips on placement and using the Acoustic Space and other equalisation controls. The supplied power cord is a standard IEC type, while inputs are available for RCA phono (unbalanced), plus balanced TRS jack and XLR.

It’s common to find a round bass reflex on the rear panel of monitors such as these. The E8XTs, though, feature a front-firing port acoustic that helps them achieve an ultimate low-frequency response of 35Hz, 10Hz below the output of previous models. Having the port at the front is beneficial for placement, as rear-firing ports require space to breathe and close-to-wall placement compromises efficiency. The build quality is excellent for the price, with the vinyl-laminated MDF cabinets featuring bevelled edges, while internally the structure is braced to suppress resonance. Visually, the XT range improves on preceding models with its attractive elliptical waveguide dominating the front baffle. 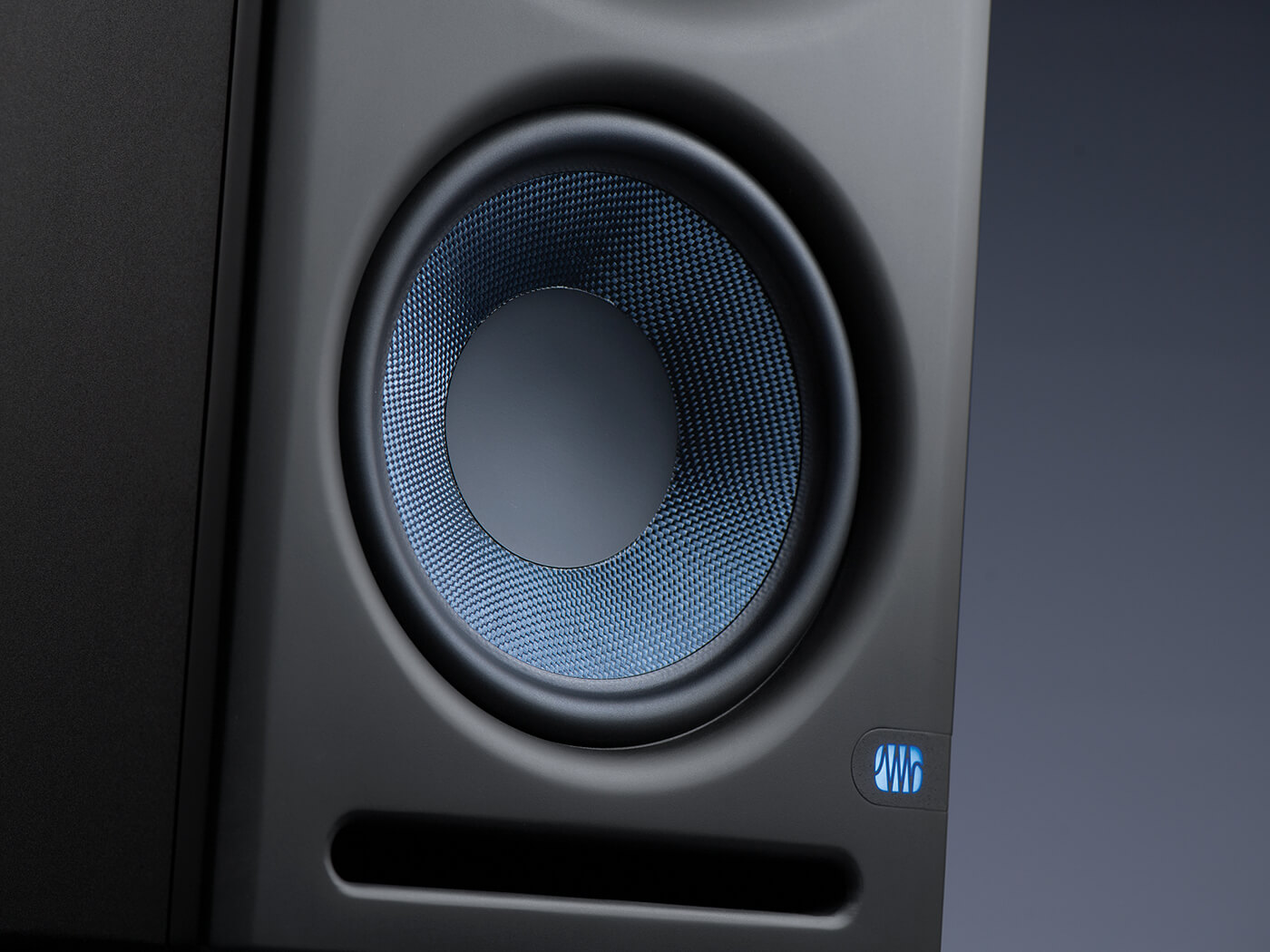 The heat is on

It’s always worth switching on monitors such as these in advance of critical listening to allow the internal amps to warm up. Although the E8XTs are powered by traditional Class A/B solid-state amplifiers, which run hotter than Class D types, there are no heatsinks on the cabinets. While the rear panels become warm to the touch, they do not feel as though the amplifiers will overheat.

PreSonus does not specify a running-in period for their monitors. But, as these were fresh from the box, we played an hour-long burn-in disc of wideband audio through them while they were warming up.

The E8XTs arrived just as we were coming to the end of our time with the ADAM Audio T8V monitors reviewed last month. Both models incorporate an eight-inch mid/bass driver and both are the largest models in their respective company’s budget product range. But that’s where the similarities end. Sonically, the two are chalk and cheese. The T8Vs feature a proprietary ribbon tweeter that moves air four times faster than dome types such as the silk-dome tweeter of the E8XTs.

Ribbon tweeters are renowned for their trip-hammer transient response, making them incisive and ruthlessly revealing. The silk-dome unit in the E8XT is far smoother in its approach to high-frequency reproduction and, while it doesn’t extend as far upwards (it hits 20kHz as opposed to the ribbon’s 25kHz), it delivers treble information effortlessly. This makes them easier on the ear during lengthy listening sessions and more in tune with how most of us hear music in domestic environments. That’s not to say they’re voiced to sound polite and forgiving like many hi-fi loudspeakers, rather that they have a more traditional monitor sound akin to classic Tannoys.

We used David Bowie’s Ashes To Ashes to form our first impressions of the T8Vs, so we again play this layered and nuanced production to assess the character of the E8XTs. With all settings flat, the bass output is too strong for their location – about seven inches from a rear wall – so we dial in the -2dB option of the Acoustic Space setting to even things out. While the E8XTs don’t deliver the forensic detailing we heard previously, the integration between bass, mid and high frequencies is incredibly balanced.

The wide sweet spot enabled by the E8XTs’ waveguide produces an enveloping, room-filling sound, though it’s somewhat at the expense of pin-point precise stereo imaging. As it is, the monitors paint a bigger picture with a muscular presentation that only larger monitors can achieve. Extreme low-end output is generous while upper bass frequencies, where bass guitars and kick drums often dominate, are forceful and punchy.

They perform well at all volume levels too, and don’t become harsh or shouty at higher SPLs. Although these aren’t the fastest-sounding monitors on the market, their laid-back character allows you to focus on the texture and body of instruments and voices instead of the ear being drawn to the notes’ leading edges.

The E8XT’s traditionally voiced monitor sound is, unsurprisingly, well suited to those who predominantly record traditional instruments and organic music, while producers of modern pop and electronica might prefer the more incisive and crisp sound of ribbon-equipped monitors.

There is no such thing as a perfect monitor – the E8XTs’ comprehensive acoustic tailoring and EQ is testament to that – and potential users should audition several types within their budget before choosing the right one for them. But make sure the E8XTs are high on your audition list. They might just be the adaptable monitor you’ve been searching for. 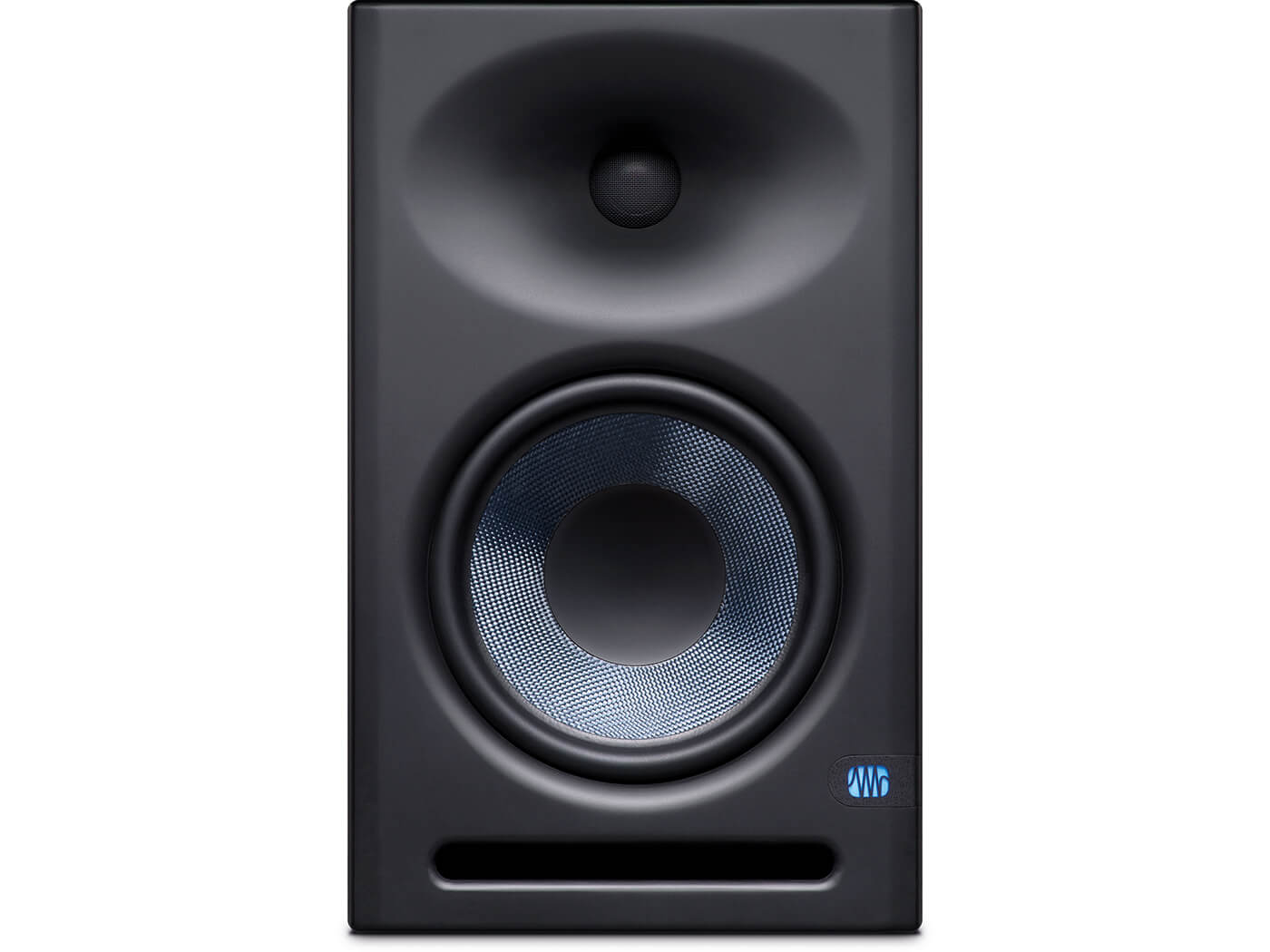 It’s a familiar mantra but we always advise to buy the best monitors you can afford. That said, trickle-down technology from manufacturers with ranges at all costs means you get a large slice of high-end sound for bargain prices. Many monitors these days incorporate ribbon tweeters for a fast sound and crisp transient response.

The E8XTs buck this trend by using a low-mass silk-dome tweeter to produce a smooth and effortless sound reminiscent of the huge monitors found in professional recording studios. They are room-friendly too, so if you’re able to monitor at high SPLs yet only have a small room, you can fine-tune them to sound correct in almost any space. 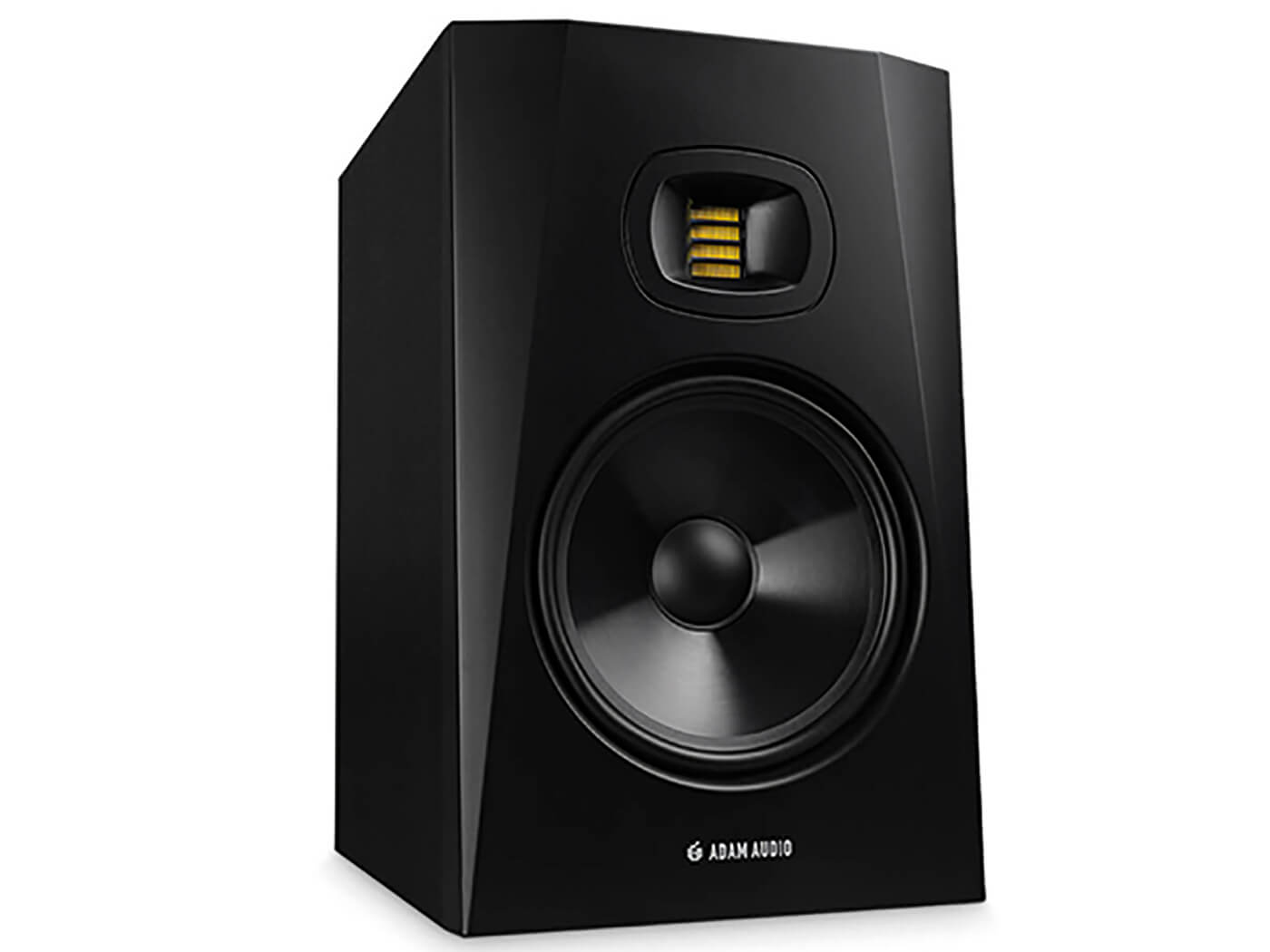 The T8Vs are the largest in the affordable T-Series, offering seismic bass along with ADAM’s incisive U-ART ribbon tweeter. They have a crisper sound than the E8XTs but need a large room to really sing. 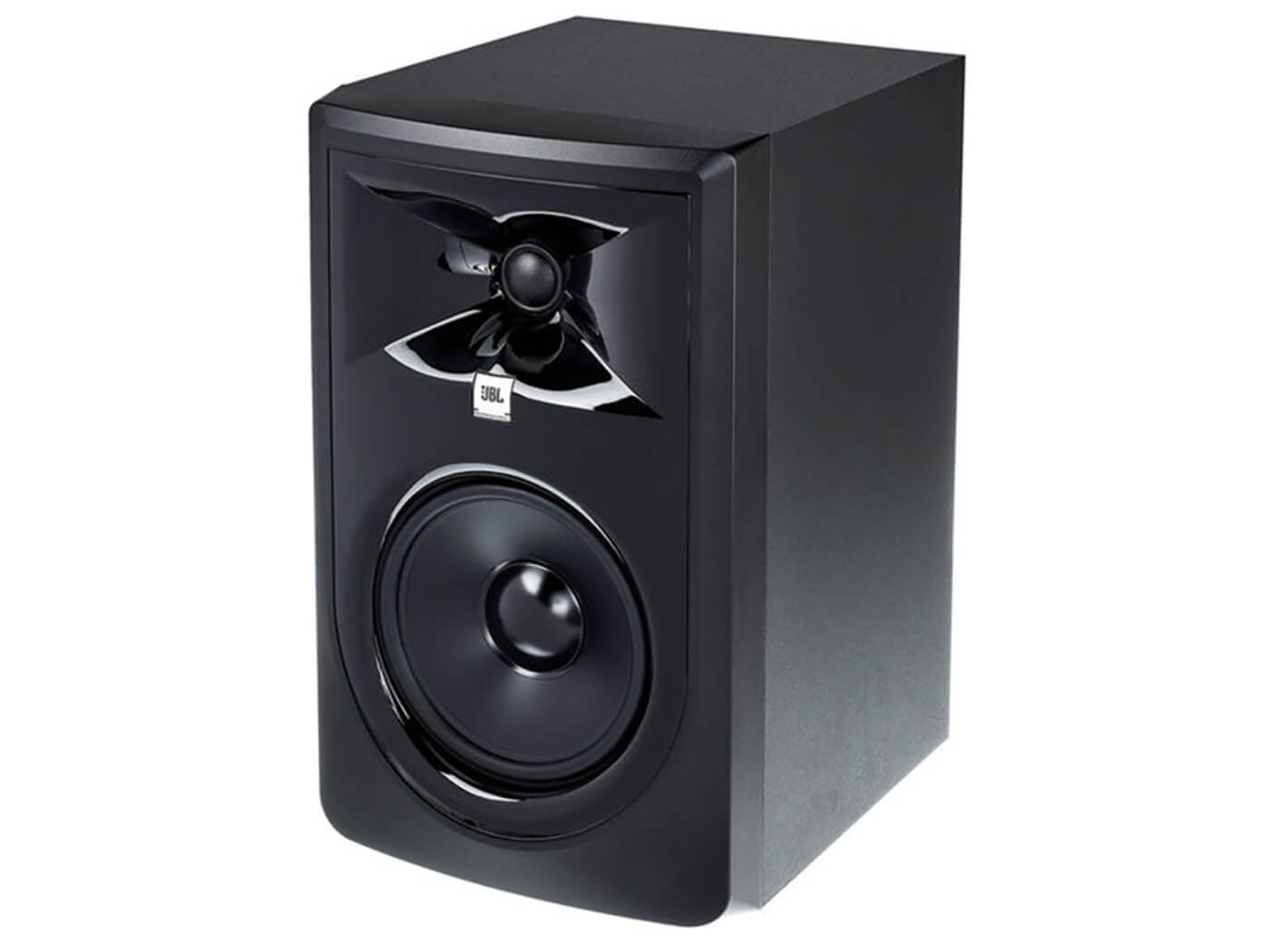 The 306P is another big-sounding monitor with muscular bass. We love the clean, unhyped treble and found them to be smooth and unforced with an insightful midrange and panoramic stereo imaging.