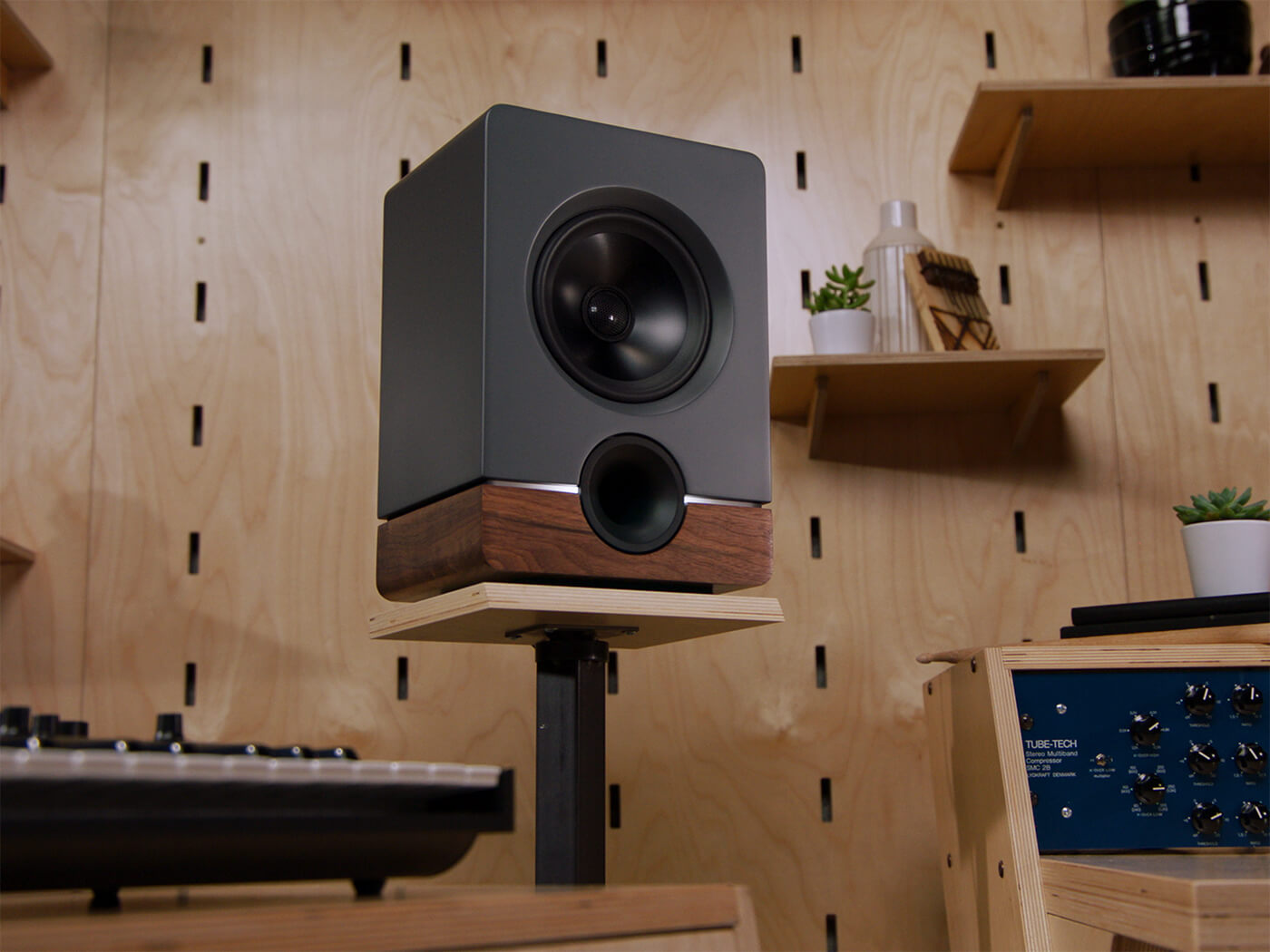 On the face of it, Output‘s new Frontier is a conventional mid-sized two-way active monitor; however, this intriguing design stands out from the pack in several ways. At first glance, you could be forgiven for thinking that the Frontier has only a single full-range driver, but the monitor is a coaxial design.

For the uninitiated, this means the HF driver – or tweeter – is in the centre of the mid/bass (woofer) unit, rather than separately, further up the front baffle. There are sound acoustic principles for this less common type of driver arrangement, not least the superior phase-coherence it enables. Unlike monitors that have spaced drivers, coaxial drivers produce sound waves that are time-aligned.

Although this type of design fell out of favour when powered monitors became standard, this studio loudspeaker style used to be practically ubiquitous. Most British studios in the 60s and 70s used Tannoys, with their proprietary Dual Concentric drivers following the coaxial principle. Likewise, the Altec designs popular in US studios (and EMI’s Abbey Road Studios during the Beatles era) featured an HF horn firing from the centre of the larger bass unit.

The Frontier also bucks the trend for rear-ported bass-reflex monitors with its ‘custom designed’ front port, making it more flexible in positioning, which is especially useful if a near-to-wall placement is necessary. 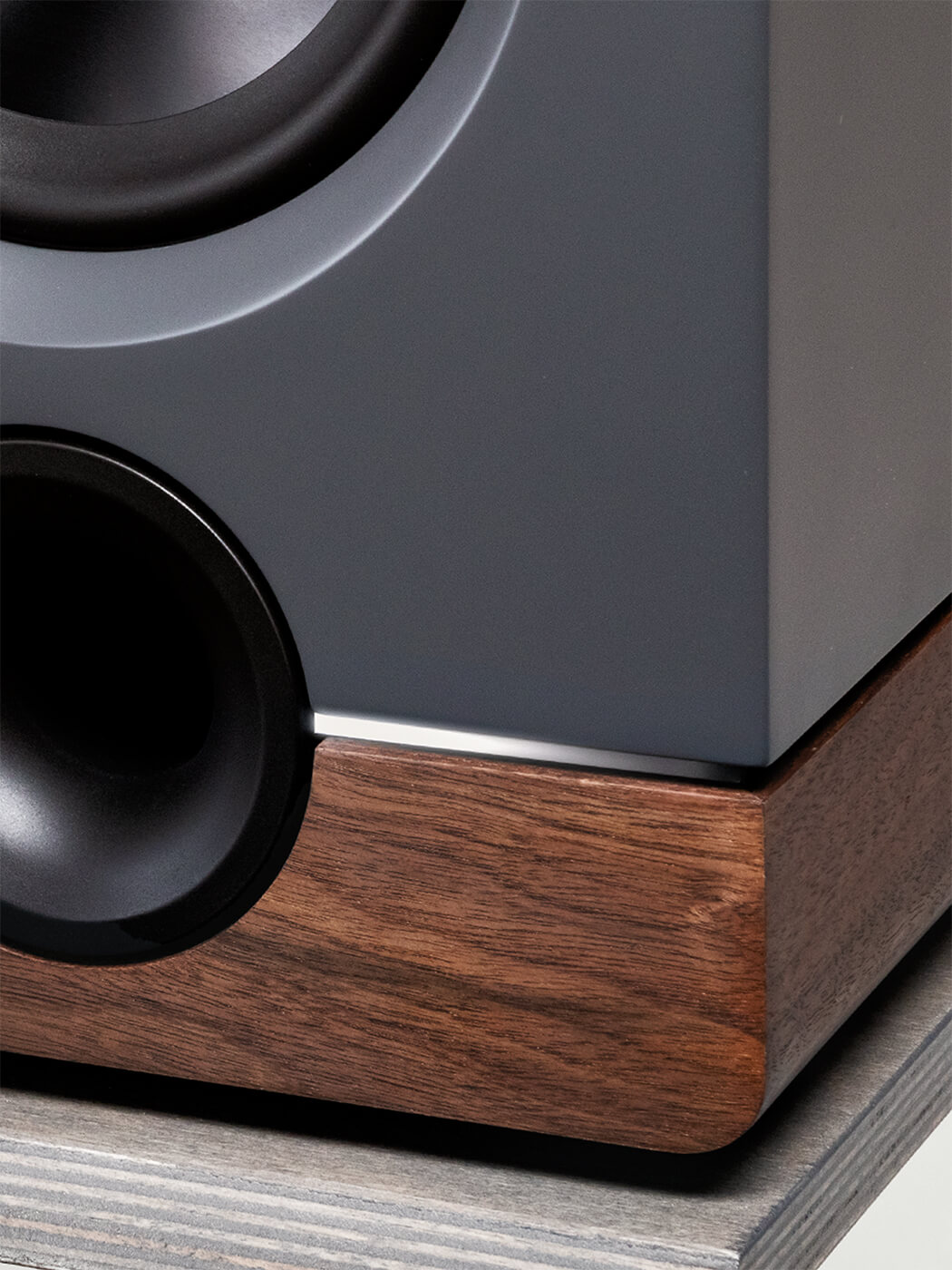 Many modern monitors feature various EQ controls and filters to assist with room positioning. However, Output opts for a minimalist approach with no user-adjustable equalisation to complicate the signal path. One could interpret this as a purist’s approach, rather like audiophiles rejecting tone controls on amplifiers to avoid sound-degrading switches.

All you get by way of switchgear is a toggle switch on the rear panel to activate Eco Mode. This power-saving option allows the internal amplifier electronics to idle with reduced power consumption without powering down completely. This is a handy feature for when you wish to take a break from using the monitors, as it allows the amps to stay optimally warmed up, so they are at their best as soon as you’re ready to recommence work; no warm-up time needed.

Obviously, there is a power switch. This is adjacent to the IEC mains socket, along with balanced XLR and unbalanced phono inputs and a level control. This level control isn’t a standard volume pot that you can turn down to silence. Instead, it’s a stepped attenuator allowing you to fine-tune the output level to suit your monitoring requirements. Even at its lowest (-10dB) setting, you still hear audio from your DAW.

Back to the front panel and the coaxial drive units are a most interesting design. Both the 1.25-inch tweeter and the surrounding 6.5-inch woofer are made of an aluminium alloy with a high stiffness to weight ratio. Output claims this lets both drivers achieve near-perfect pistonic behaviour throughout their pass bands. 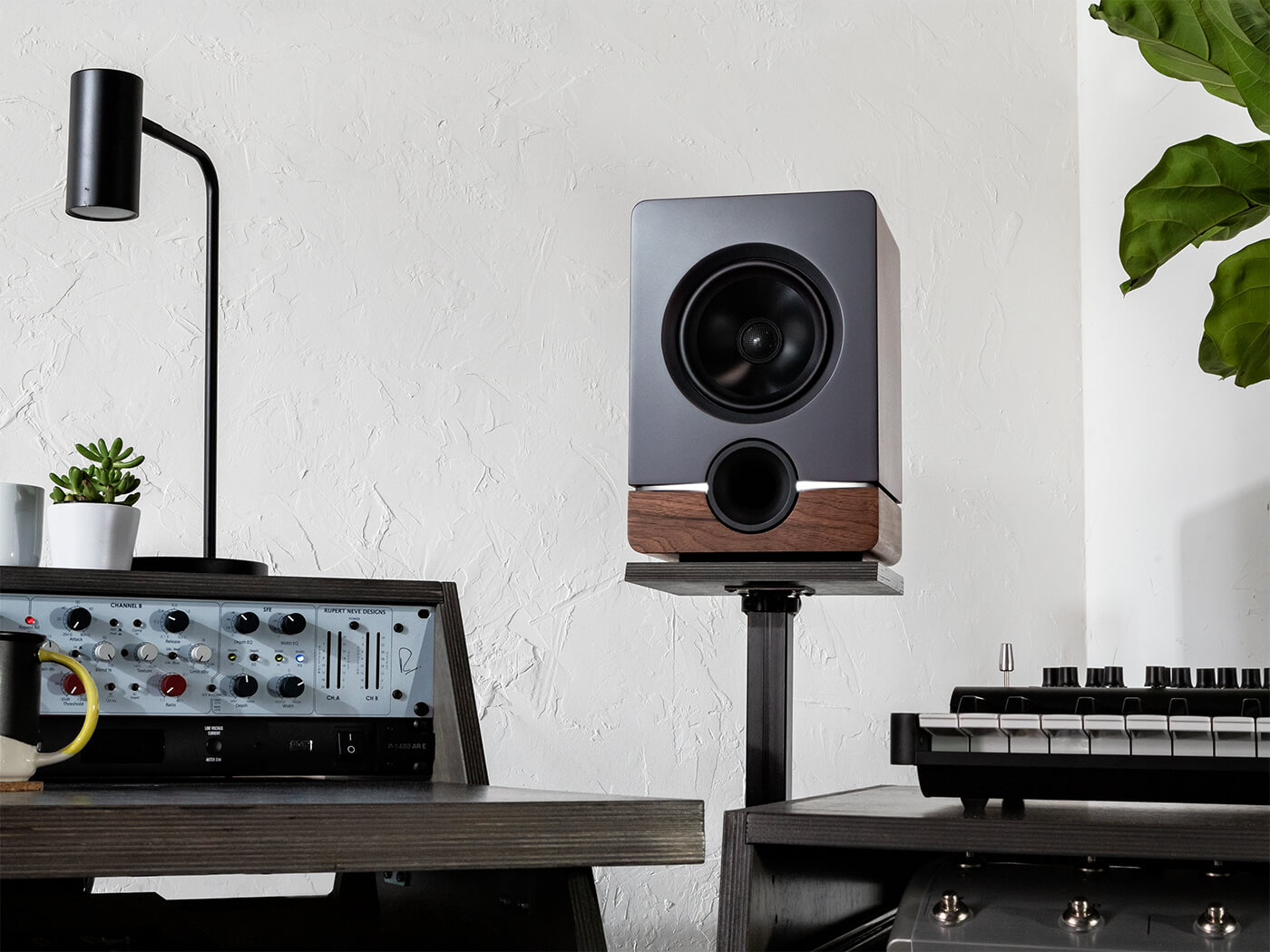 Few would identify the woofer cone material as an aluminium alloy. It looks and feels more like a plastic material, reminding us of the bextrene cones found in the classic BBC monitors from the 1970s. Aesthetically, that’s where any similarity to those dowdy-looking BBC boxes end, as the Frontier has fantastic visual appeal. Its base is formed from a solid block of walnut, atop which sits a painted MDF cabinet.

Between these two elements is a bifurcated LED that emits a soft white glow; it’s important to decide whether or not this light appeals to you, as you can’t switch it off. Either way, these monitors are designed for smart, elegant studios that don’t have an endless flow of musos in and out, plonking coffee mugs and such like on top of them. Those who like their pro-audio gear to be tough and rugged with grab-handles and bomb-proof build and finish will likely find them rather too delicate.

However, the cabinet design is Output’s forte, as the Frontier has been produced in collaboration with Barefoot Sound’s monitoring technological expertise. Barefoot’s bespoke amplifiers power their coaxial drive units, each receiving 100 watts of power. The crossover frequency is fairly conventional at 3kHz, while the quoted frequency response is 45Hz – 25kHz.

Although the front-firing bass-reflex port opens up placement options, especially when near-to-rear-wall placement is necessary, care should be taken when finding their final resting location. Soft pads are provided to prevent scratching the walnut base; however, these do nothing for sonic improvement (though that’s not to say they degrade the audio quality). We recommend using either dedicated stands – Output offers stands at £285 per pair – or isolation pucks such as the IsoAcoustic Iso-Puck mini we use for review. Position-wise, angling the monitors inwards so that the coaxial drivers point directly towards the listener’s ears is the best starting point, especially for nearfield monitoring.

With the electronics fully warmed up and the LED strip’s soft white glow creating a cosy ambience, we begin by playing a few familiar test tracks to assess the Frontiers’ character. From the outset, it’s clear that the Output/Barefoot collaboration has produced a monitor quite different from the current trend for lean, mean monitoring machines with trip-hammer transients and tight-as-a-drum bass. Instead, the Frontiers exhibit a ‘sounds bigger than they look’ character with a full-bodied low-end and easygoing nature throughout the broad mid-band. Treble is smooth, detailed and well extended but not sharp nor explicit. Think of your average two-way near to midfield design with lightning-fast AMT tweeters and a brutally honest presentation, and these charming monitors couldn’t be more different. Subjective upper bass emphasis fleshes out and flatters audio more like hi-fi speakers than truly transparent monitors, though published measurements show that the Frontiers have a flat frequency response throughout their range. 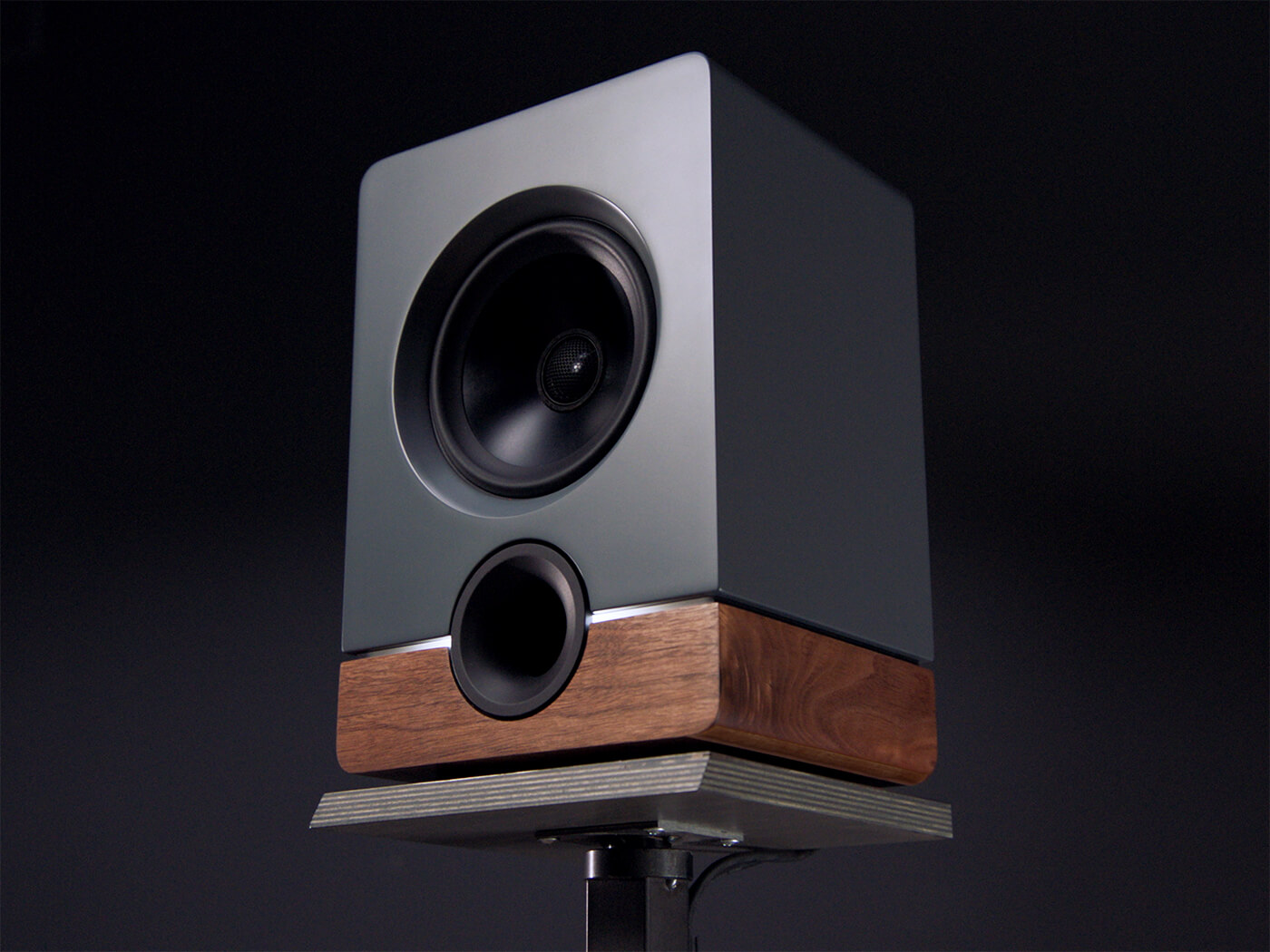 Coaxial drivers provide a ‘point source’ monitoring experience with several benefits. Razor-sharp focus is one, and the Frontiers combine this with a cavernous, deep soundstage that allows you to listen into a mix meaningfully. No relentless firing of upper-mid detail to pin you to the back of your chair here, rather a warm and inviting presentation that makes things crystal clear without hammering the point home.

Phase coherence – another point-source strong point – cannot be faulted and adds to the Frontiers’ ability to encourage lengthy listening sessions without inducing fatigue.

Output’s Frontier monitors are an interesting proposition, offering a worthwhile alternative to the many soundalike monitors available today. We can’t see these being put to use in a busy working studio, but for home producers with a stylish studio space, these classy and well-mannered monitors are well worth a listen.