A pair of 88RS preamps take pride of place in Neve’s sizable contribution to the USB interface market. 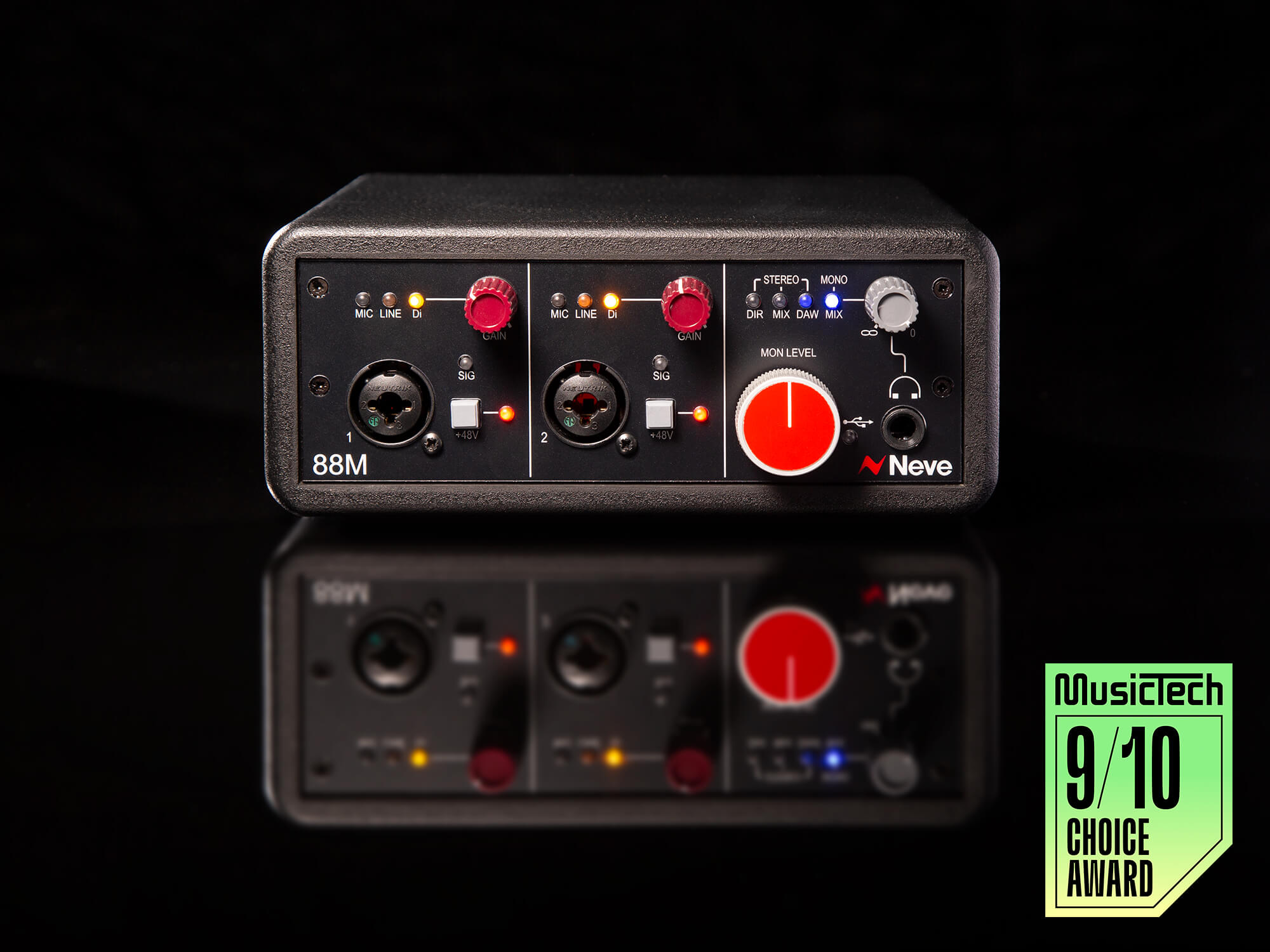 AMS Neve’s 88M makes an immediate impression by virtue of its size and weight. The textured vinyl covered enclosure brings an air of professionalism that is enhanced further by the quality of the controls, sockets and layout. What is slightly disconcerting is that this behemoth of an interface is run by USB bus power alone.

The mass of the Neve 88M is partly due to the distinctly uncommon inclusion (for interfaces) of preamp input transformers. The Marinair specification transformer is fundamental to the design of the 88RS console preamps that have been ported into the 88M. AMS Neve declares that this is the same preamp, so there has been considerable design work carried out to run these from the 5v the USB 3.0 connection will provide. As quickly becomes clear, whatever is going on inside allows a distinctly major league sound to be conjured from less than 900mA.

Housed with the two 88RS preamps are a headphone amplifier, quarter-inch TRS stereo monitor outputs, balanced TRS insert send/returns for the two analogue channels, and ADAT sockets for an additional eight channels of digital audio at 44.1/48kHz. (Four at 88.2kHz and two at 176.4/192kHz). For the security conscious, there is also a Kensington lock at the rear of the unit.

The 88M is an audio interface in the simplest of forms. There is no DSP for effects, no mixer matrix, no controller app. Under Apple OSX it appears automatically as a Core Audio device, while a driver is needed for Windows 10 operation. The only options set via the host computer are sample rate and clock source (internal or ADAT input.)

The monitoring section of the 88M features two centre detented knobs for headphone and monitor levels. The centre detents are set at -6dBu and -12dBu from maximum output levels respectively, which is especially pertinent to setting the nominal operating level for monitor amplifiers.

Though both knobs are of the switching kind only the headphone level currently does anything when pressed. The user can toggle through four monitoring modes, each indicated by corresponding LEDs: stereo and mono blends of the analogue inputs (post insert, pre A-D conversion) with and without the stereo DAW, as well as a DAW-only mode. There are no mix controls beyond this. A simple adjustment of the DAW/computer audio level sent to the 88M will make the most of the zero latency input monitoring on offer. 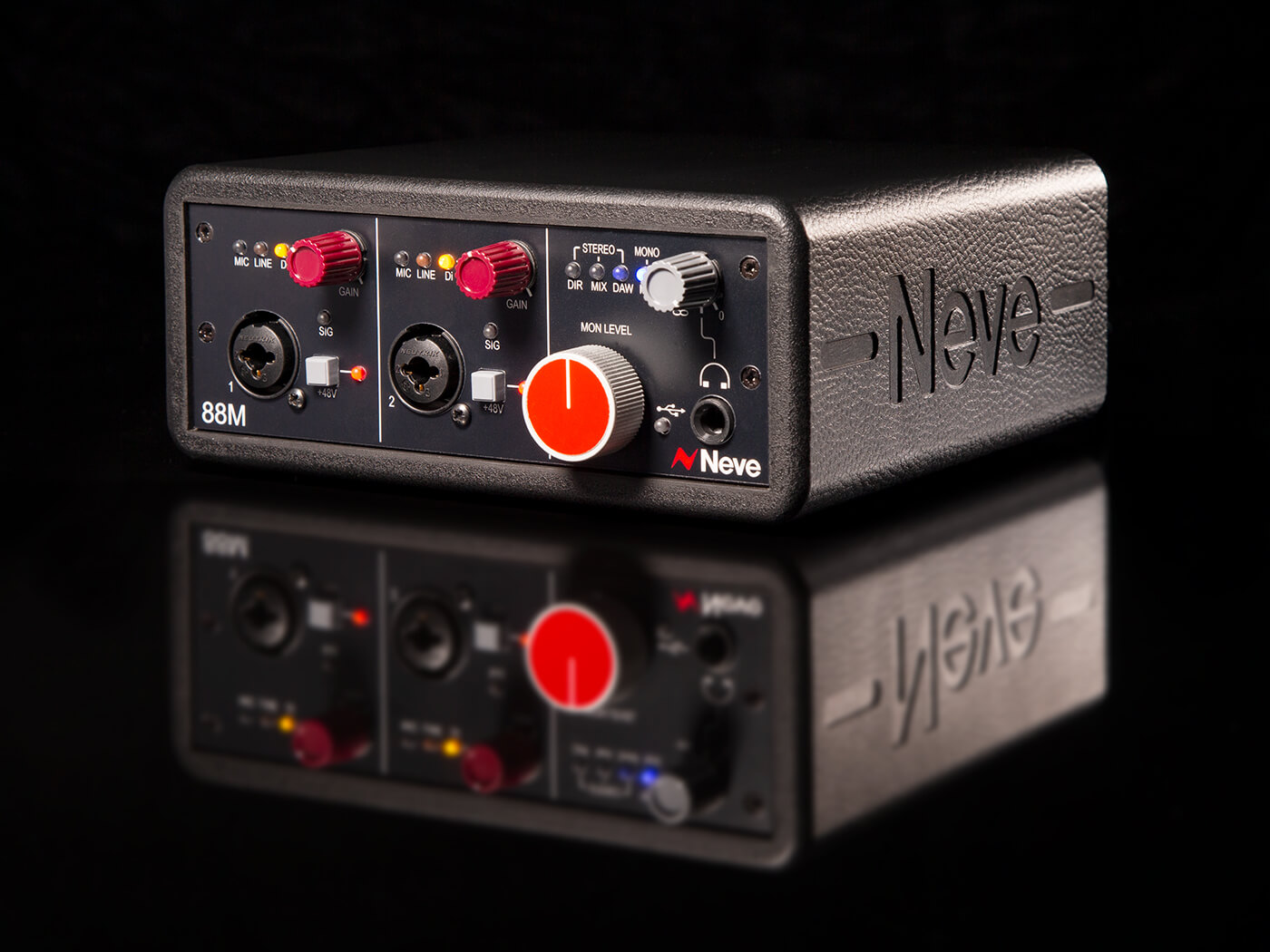 The lack of digital audio fuss, as well as interface regulars such as MIDI connectivity, highlights how the 88M is aimed solely at recording and monitoring at the highest possible quality. With regard to the latter, the headphone amp doesn’t disappoint. The signal is full and clear from top to bottom with no upper-mid and high-frequency harshness whatsoever. There is plenty of power to drive the usual range of headphones, and it appears the only compromise on sound would come from the cans themselves.

Similarly, the monitor line output signal is pristine, which speaks not only to the analogue signal path quality but also to that of the D/A conversion. Speaking of, the A/D conversion is equally excellent, as you’d expect. What can be heard direct off the analogue inputs using the zero latency monitoring comes back from the AD/DA round trip sounding just as impeccable (source allowing) on playback. What more can you ask for?

One can, of course, ask for two Neve 88RS console preamps with mic, line and DI inputs via an XLR combo socket, and with the Neve 88M you’d get them. Like the headphone level knob the two preamp gain controls can be pressed to toggle the three input types, each indicated by their own coloured LEDs. Above the +48v buttons on each channel is the SIG tri-colour LED which tracks the post insert return (pre A-D) level. The green, yellow and red are scaled to dBFS values (-43 to -5, -5 to -3, -3 to 0) to make more sense with DAW metering.

All three input types make use of the Marinair transformers, which are key to the 88R/88RS console preamps. Though the 88M preamps have 2dB less microphone gain than their console siblings, likely a limitation necessitated by the USB bus powering, there is more than enough amplification available for the innumerable uses these can be put to. No matter the mic the 88M preamp delivers a truly pro level sound, from high end condensers to dime-a-dozen dynamics. The 1.5kΩ input impedance appears to work well across a wide range of microphone types, with ribbon mics old and new producing their best selves without incurring unexpected noise levels. From SM7Bs and MD441s to Coles 4038s and Royer R121s the 88M preamp garners great performances from impedance sensitive mics, translating their best aspects with ease and often bringing a nuanced enhancement to these studio stalwarts.

The attributes associated with well designed/utilised transformers are in evidence, as expected from Neve products. Though clarity and fidelity are key components of the sound on offer here there is also that tendency to gently beef up the bottom end and smooth out spiky highs without producing boxiness or dullness. For example, when recording an acoustic guitar the body resonance was simultaneously brought forward a little without getting boomy, while the picking articulation detail made it unnecessary to reach for EQ. These preamps are probably about the best to be ported into a USB interface thus far and are capable of delivering genuinely high quality results across a wide range of sources. Vocals, voiceovers, guitar amps, percussion, drum kits and cellos all benefit from a trip through the 88M preamps. 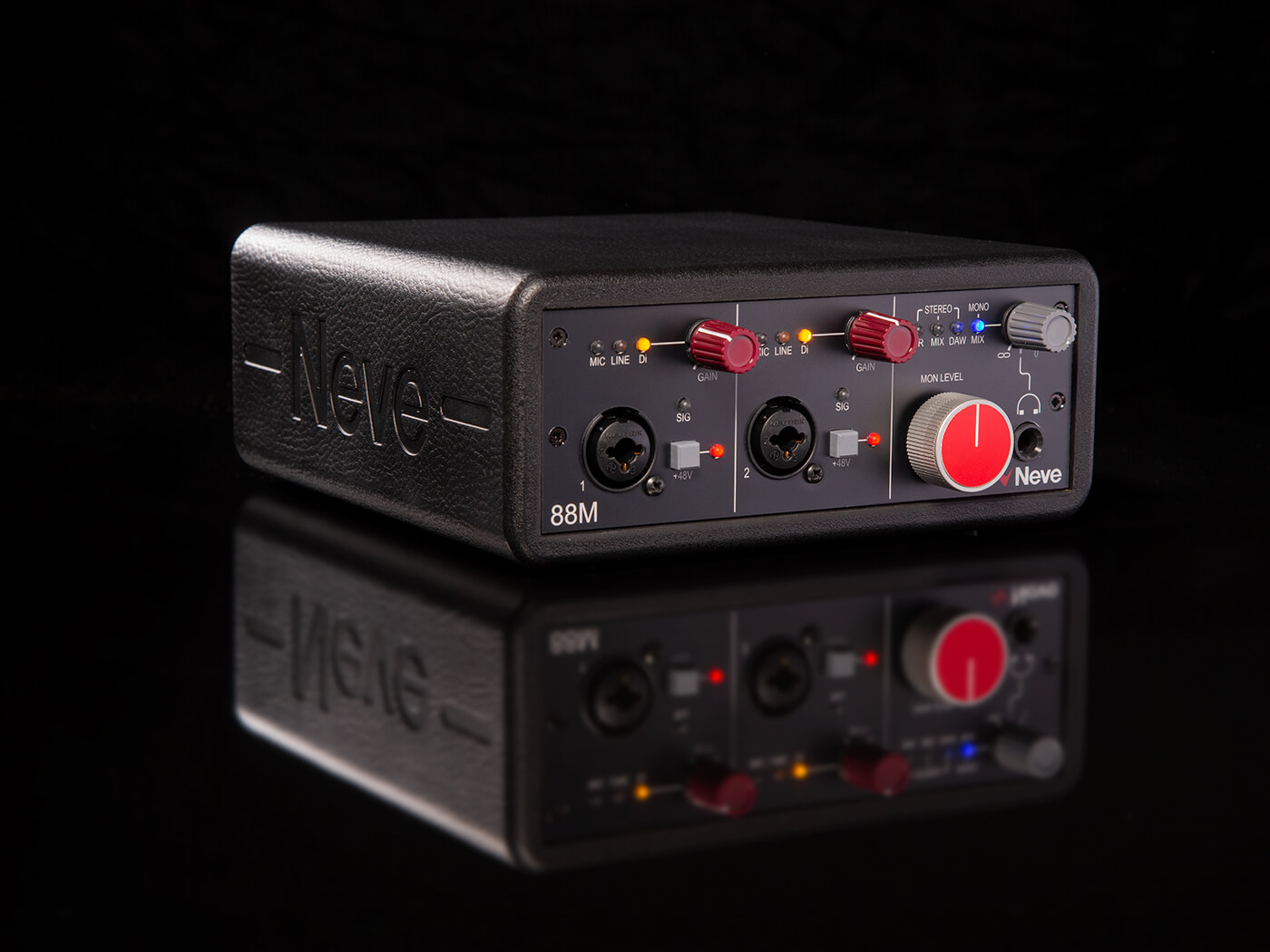 Used with line level sources the 88M loses nothing, and the subtle difference it does impart for some sources is never unwelcome. Running hardware synths in, especially those with heavy low ends and/or intense highs, is definitely good news for the ears. DI guitars and basses are rendered full and clear. Punchy bass and choppy guitar parts seem to punch and chop that bit better than many standard Hi-Z input stages, and with the balanced (+4dBu) TRS inserts at the rear outboard EQs and compressors can be brought to bear on the humble DI before hitting a virtual amp or making the eventual journey to re-amping. These channel inserts are the icing on the cake for those with outboard they actually use.

Considering two Neve 88RLB 500 series preamps will set you back around £1,300, the 88M is priced fairly indeed. Two top flight preamps in a bus-powered USB interface in combination with the professional quality monitoring and AD/DA conversion makes the Neve 88M a heavy hitter, both figuratively and literally. Compared with the vast range of similar channel count USB interfaces the 88M is unbeatable with regard to sound and build quality, so if you don’t need anything but audio and are willing to make a professional level investment, this is for you.