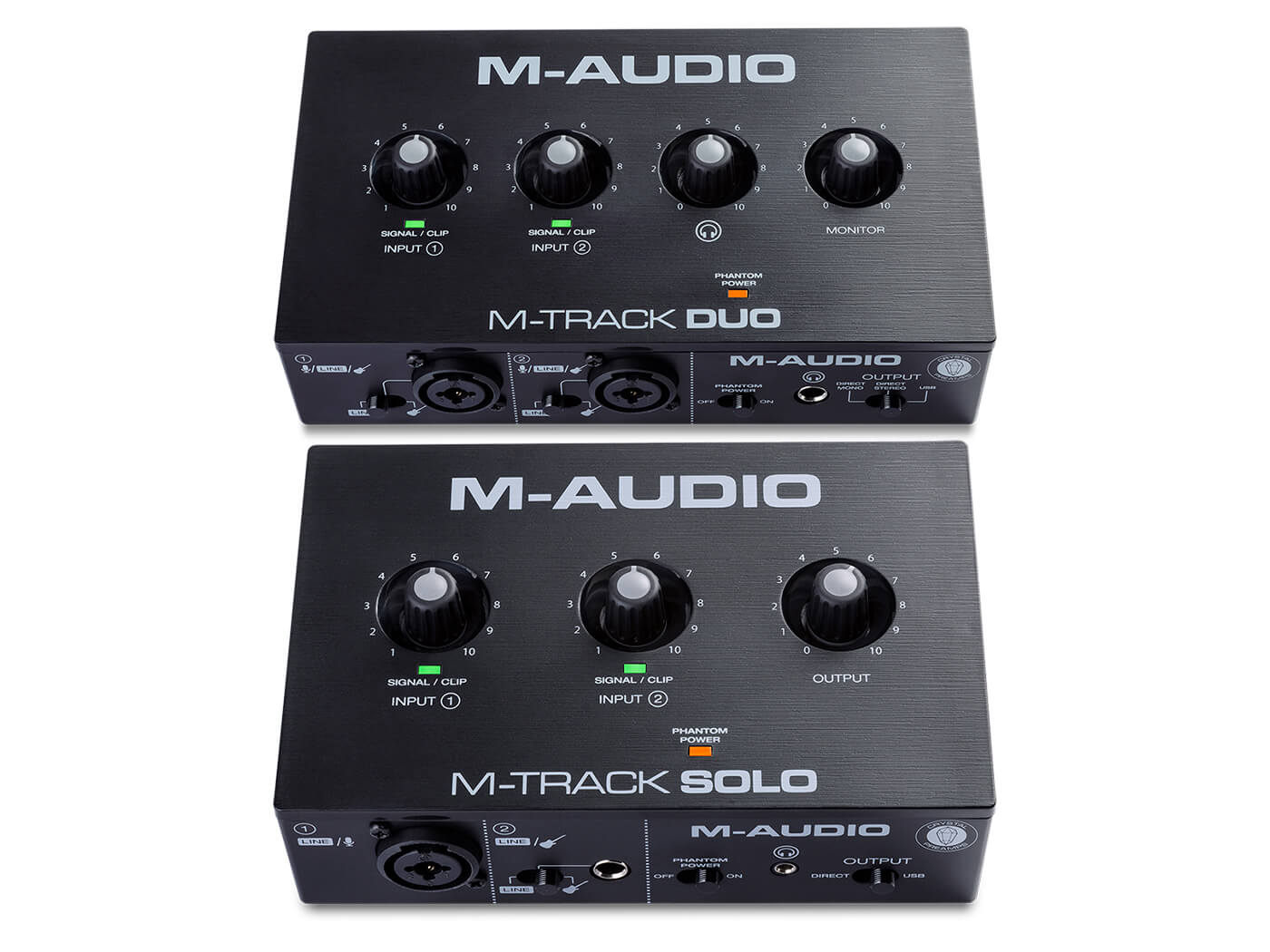 These interfaces are a good deal for their modest price, but if you need higher sample rates, more advanced monitoring controls or MIDI I/O, you may want to look elsewhere.

The latest incarnation of M-Audio‘s M-Track interfaces has been launched at a lower price point than before, destined to compete with budget, less established brands. Simplicity is key here, with only the most essential features and controls present; barebones pre-amp controls, simple mode switching for direct monitoring that lacks any kind of balance control, no onboard MIDI, and single-LED input metering per channel.

Despite the Solo and Duo monikers, both products have two inputs – the Duo offering two combi mic/line/instrument inputs, whilst the Solo has a single mic/line combi connector plus one line/instrument jack. Handy for recording a vocal mic plus DI guitar, or stereo line inputs – something that some other budget interfaces do not offer. Line ins/outs are all balanced, too; another less obvious advantage over competing low-end gear.

Both the Solo and Duo retain a similar desktop format to previous M-Tracks – composite rather than metal, but this time finished with a pleasing brushed aluminium effect. Overall weight is on the lighter side, but chunky rubber feet stop the interfaces from walking about the worktop. Despite some lateral wobble in knobs and slightly flimsy toggle switches, nothing feels like it’d easily fall apart. If anything, it seems as though the knob spindles are set too tight to compensate for this.

Getting underway with the hardware on macOS is plug-and-play since the interfaces use the system-native Core Audio instead of a dedicated driver or control panel. Windows users require a driver, available from m-audio.com. While such an approach sometimes sees manufacturers hitting the latency performance limits of Core Audio, it also means that drivers don’t readily go out of date. That’s an advantage compared to the practice of manufacturers dropping support for perfectly serviceable devices by not ‘signing’ drivers for the most recent operating systems. This won’t be an issue with the M-Tracks.

Adoption of Core Audio also equals iOS compatibility – on the face of it, great news for music-making – but the implementation here is disappointingly clunky. As well as the relevant (costly) Apple brand USB connection kit, users also have to work out a way of powering the audio interface using a USB breakout cable, so more investment and head-scratching required.

More helpfully, most other manufacturers include additional ports to help provide power to the interface while also connecting to hardware running iOS. I think potential buyers would pay a little more to have their audio gear work more painlessly with iOS!

After registering with both M-Audio and Avid, users get access to the free (First) version of Pro Tools, without subscription and with a few bonuses in the form of a handful of virtual instrument plug-ins that would usually need to be purchased separately (at the cost of around £/$10 each). MPC Beats is also bundled, but again this is a free product anyway.

Installing the software is time-consuming and often confusing, requiring multiple user accounts, and it would have been much neater to have a combination installer rather than having to download and install each plug-in separately. Often, with bundled software you just want to give it a quick spin to see if any of the included plug-ins are worth keeping or using; this simply isn’t possible in this case. Nevertheless, there’s a fair selection of tools for the novice, including the Lite version of the Eleven guitar amp simulator, no longer readily available outside of a software bundle. Less positive on the software side is that the really useful audio plug-ins developed by Air, for example, the versatile Lo-Fi distortion plug-in, are no longer included in the M-Audio bundle.

On the right track?

In a session, DA converters sound clear and articulate on playback, although on paper the dynamic range specifications do not reach the heights of slightly more expensive interface offerings from the likes of Audient and others. Mic pre-amps (offering 54dB of gain) are perfectly fine also; not noticeably noisy but the knob is notchy in the upper ranges, giving a massive crank of gain in the final few degrees of rotation. 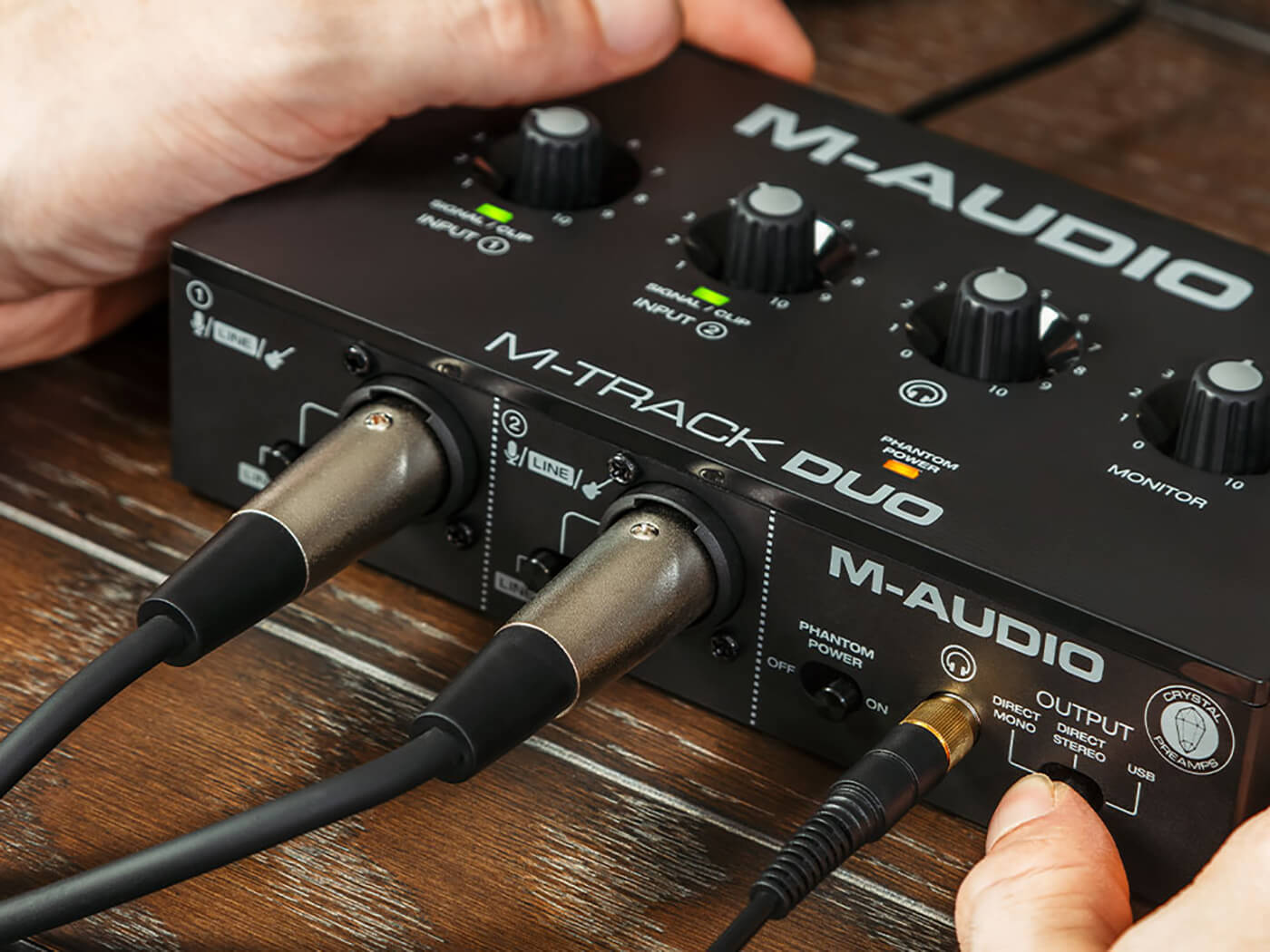 On the headphone monitoring side, mono/stereo direct monitor modes (Duo only) are hugely welcome. Stereo can be handy when trying to differentiate two signals in the headphones or have the input signal just in one ear. We just wish that there was a direct monitor/playback balance control too. This would make it much easier to get the correct monitor mix. Less experienced users will surely be tempted to progressively increase the input gain until they can hear themselves instead of trimming output faders in their DAW, which is not very user-friendly. The headphone amplifier itself drives a 55-ohm pair of headphones to produce a reasonable output level, but you’ll need lower impedance headphones than this to get really loud.

Working with virtual instruments in a DAW, a buffer size of 64 samples upwards is required to give uninterrupted playback. In terms of round-trip latency, this gives a just-about-bearable 10ms or so at both the available sample rates (sample rate limitations do have a bearing here). This kind of performance should be acceptable for the majority of users though; fine for adding the odd virtual instrument in real-time, but a number of CPU-hungry instruments in the mix might prompt a switch to higher buffer sizes, taking the user over the 10ms mark when playing through an instrument plug-in.

If you want decent audio quality for an extremely modest outlay, the new M-Tracks are certainly worth a look. Although useful features have been removed to allow for the price cut, you cannot deny that they are a good deal for the money. Prospective buyers who are likely to need MIDI I/O and higher sample rates down the line may need to look at what brands such as Behringer are offering at a similar price.