California-based Kali Audio has impacted the monitoring world in a big way since arriving on the scene in 2018. We test the company’s claim that its latest offerings reveal hyper-realistic detail. 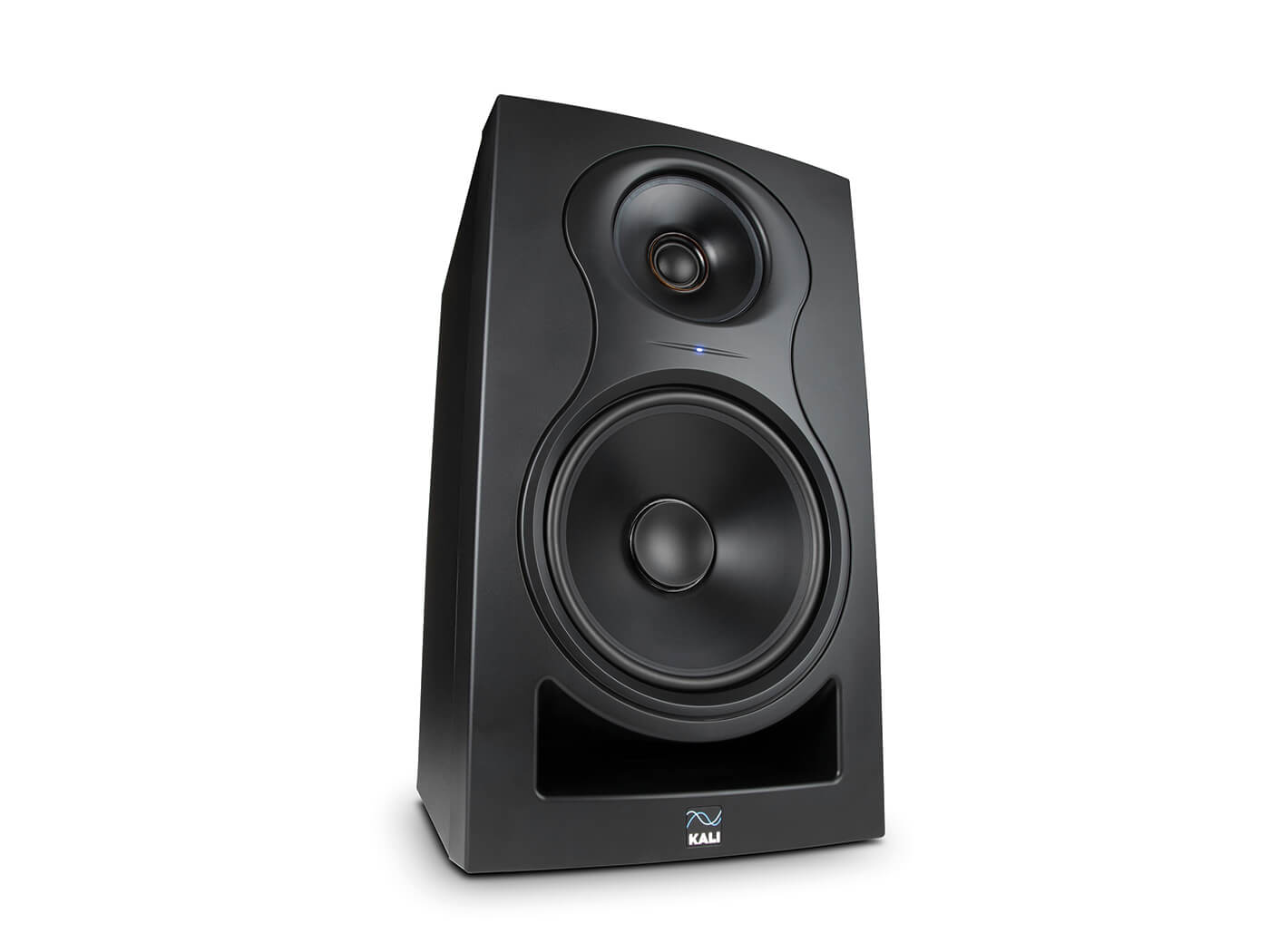 Too big to be used as meter-bridge nearfields yet not quite large enough to impress as main studio monitors – there was a time when monitors of this size were rare beasts. But Kali Audio’s IN-8s are the third eight-inch-driver monitors we’ve tested in as many months.

These days, with so many of us capable of producing professional-quality masters in domestic environments, the mid-sized monitor is gaining popularity apace. This is no surprise; far from being an unhappy compromise, the eight-inch driver has the potential to offer much of the low-end heft of larger designs (such as our Tannoy Berkeleys) along with the real-world presentation of music as consumed via domestic hi-fi loudspeakers.

The power of three

We were extremely impressed with Kali’s LP-6 monitors when we reviewed them a few years ago and, while Kali offers an eight-inch driver in its LP series, the IN-8s build on the LP-8s’ abilities with this unusual design. Although the IN-8s look like a conventional two-way monitors, they are in fact of a three-way design. Situated above the large low-frequency driver, a midrange driver and separate high-frequency driver are housed in a coincident arrangement. This means the tweeter fires from the centre of the midrange driver, or ‘squawker’ as they used to be known when three-way designs were more commonplace.

With three drivers employed, the IN-8s are tri-amped, with the onboard amplifiers pumping 60 watts into the woofer and 40 watts each into the squawker and tweeter for 140 watts in total. Both the bass and the four-inch midrange drivers are made from poly-coated paper, while a textile dome tweeter takes care of high frequencies from 3kHz to 20kHz and beyond. The woofer crosses over at 330Hz.

The rear panel features inputs for XLR, TRS and RCA connectors, along with a volume control, while a row of EQ and filter dip switches allow for comprehensive room placement and boundary compensation. We set up the filters for stand-mounting closer than half a metre (20 inches) to a rear wall and engage the LF trim to reduce bass output by 2dB. This provides the best tonal response in our room but even then the bass output is strong, though not overblown. An additional subwoofer, the WS-12, is also available to work in tandem with the IN-8s should you require deeper bass detail.

With the IN-8s themselves, the front-firing port assists bass response, its unusual smiley-face shape designed to reduce noisy air turbulence. It’s clearly a well-thought-out design, as no chuffing is audible at any point during our tests, even at moderately high volume. While the IN-8s are capable of high SPLs before distorting, an in-built limiter circuit protects the monitor from unsafe voltage levels if the input signal is too high.

The volume control is indented in the central position, which is recommended for normal use, though while slight adjustment may be necessary in some situations, monitoring levels should be controlled from your mixer or DAW.

On first listen, the sound produced by the IN-8s is not particularly impressive – which impressed us enormously. We know that sounds like a contradiction in terms but too many monitors are voiced to show off copious amounts of explicit detail from the get-go. Sonic firework displays may be impressive initially but they can become tiresome in the long term. 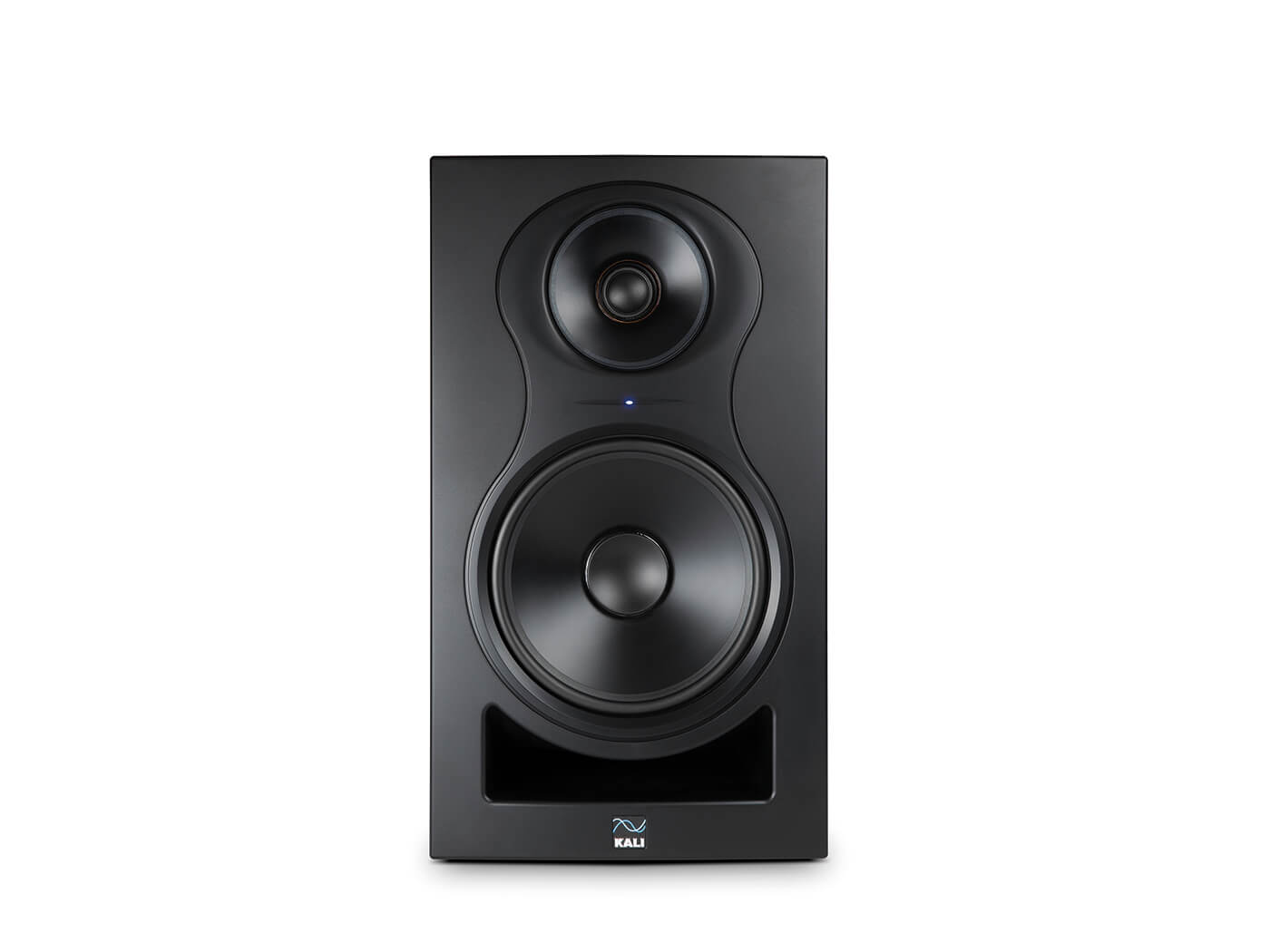 The IN-8s avoid anything that could be described as showy, instead finding the fine balance between useful detail and tonal integration. The coaxial arrangement of the midrange driver and tweeter is undoubtedly responsible for the smooth nature of these monitors, allowing the majority of audio to be heard as a cohesive whole, leaving the hefty eight-inch woofer to take care of true bass frequencies.

In this respect, the IN-8s perform more like the passive monitors that were once the norm in professional studios before designers began incorporating bespoke amplifiers into the cabinets. Specifically, more than any modern monitor of this size we’ve heard to date, the IN-8s offer much of the point-source focus of our prized vintage Tannoy monitors. The Tannoys employ a dual-concentric driver, with a treble horn firing from the centre of the woofer, similar to the IN-8s’ tweeter that projects high frequencies from the centre of the midrange unit.

This design ensures solid phase coherence throughout the broad midrange and treble regions, avoiding the phase anomalies that plague poorly designed two-way monitors with a mid/bass driver and tweeter at different points on the front baffle.

Fortunately, modern design techniques have ironed out many phase issues in multi-driver monitors. However, some budget designs can reveal irregularities when raising or lowering the listening position. With no such problems besetting the coaxial IN-8s, the integration of low, middle and high frequencies is smooth and rock-solid.

Convincing imaging is a major plus-point of this phase coherence. The stereo imaging is excellent, presenting a wide, cinemascope-like soundstage with first-rate left-to-right separation. Similarly, central images – lead vocals in particular – are tightly focused with no sense of vagueness or drift.

Where the IN-8s really pull off the trick of sounding bigger than their dimensions would suggest, however, is in their incredible depth of imaging. It’s one thing for a pair of monitors to present a panoramic stereo image but it’s quite another to produce a proper 3D holographic image like the IN-8s do.

This is revealed as we play a familiar favourite test track, David Bowie’s Ashes To Ashes. While the stereo spread and tonal coherence is as good as any at this price, the walkthrough soundstage is truly outstanding. Later, working on some pre-mixes of synth-pop tracks, we’re again impressed with the cavernous image that the IN-8s present, which allows us to quickly construct a deep and wide mix following the initial mono balance.

Speaking of monaural sound, we complete a set of mono mixes on these monitors for a library music project requiring some 1960s-style twangy guitar instrumentals. Checking the mixes on our reference Tannoys reveals only the slightest touch of bass shyness where the fulsome balance of the IN-8s influences us to be more cautious in the low end. Just for fun, we also prepare some stereo mixes mimicking the wacky extreme panning common in the 1960s when most consoles offered only a three-way switch for hard left, hard right and centre. The IN-8s’ superior depth of imaging made both sets of mixes easy and enjoyable to perform.

Aside from the sometimes overgenerous low-end response, our only real criticism of the monitors’ tonal balance is a slight bloom in the upper bass that could be perceived as added warmth. Beyond that, the IN-8s’ clarity, coherence and capaciousness is sweetly seductive.

While the recently reviewed ribbon-tweeter-equipped ADAM T8Vs impressed with their incisive treble response and snappy transients, they do not produce the cavernous image of the IN-8s. While the smoother-sounding PreSonus Eris E8XTs excel with more organic, natural-sounding music, they don’t quite manage the focus and projection of the IN-8s’ central image.

Kali Audio’s three-way IN-8s are unusual yet highly competent monitors. If you favour tonal integration, sharp focus and a holographic soundstage above all else, they’ll likely cater to all your monitoring requirements.

While we always suggest you buy the best you can afford, many monitors in the sub-£1,000 price range now punch so convincingly above their weight that we have to ask, why pay more? Of the three eight-inch-driver-equipped monitors we’ve recently reviewed, the IN-8s are the most expensive yet still represent astonishing value for money. It’s true that there’s no such thing as a perfect monitor, only the perfect monitor for you.

The ADAM T8Vs, PreSonus Eris E8XTs and the present monitors all sound quite different yet each of these options are brilliant in their own way. The best route to choose the right pair is to audition with familiar material. It would be foolish not to include these remarkable monitors on your audition list. 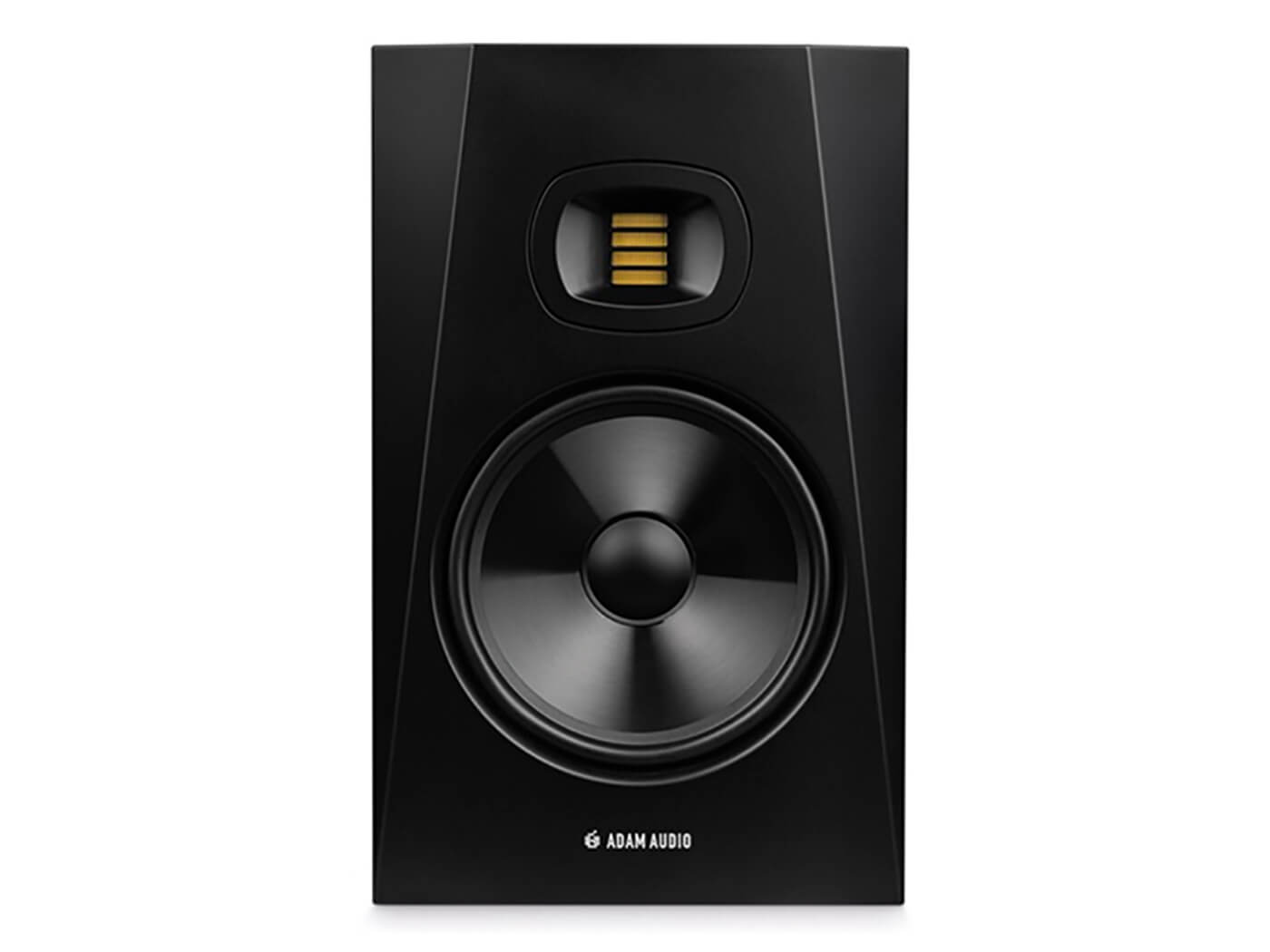 The largest in ADAM’s T-series, the T8Vs offer seismic bass along with an incisive U-ART ribbon tweeter. Crisp, fast and ruthless, they need a large room to really sing. 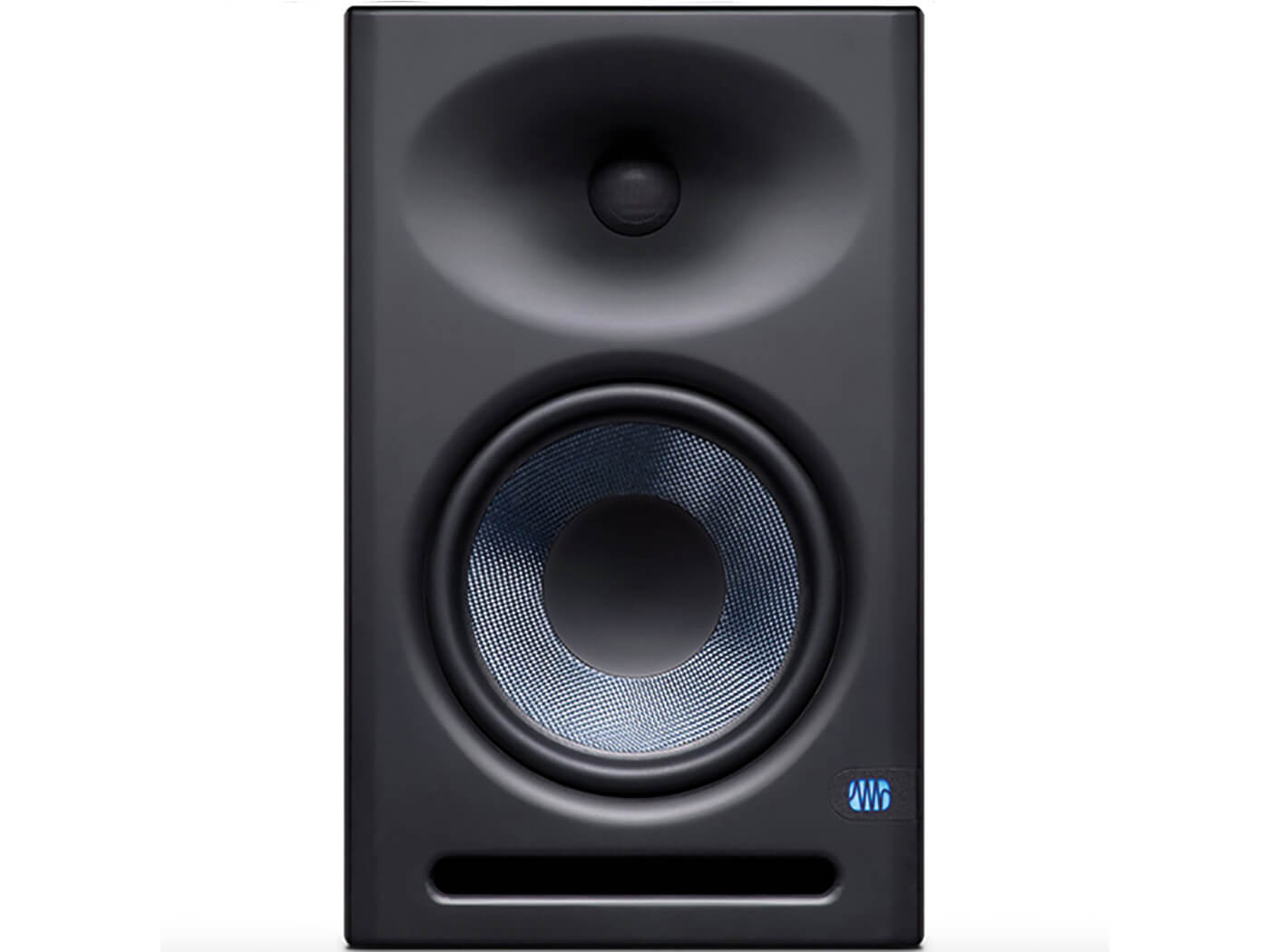 Traditionally-voiced monitors with a meaty sound, these are room-friendly, present a wide sweet spot and excel with naturally recorded music. They may be too smooth for uptempo electronica though.