IK Multimedia offers up two new interfaces for livestreaming from your iOS and desktop machines. But can they also suit recording musicians? 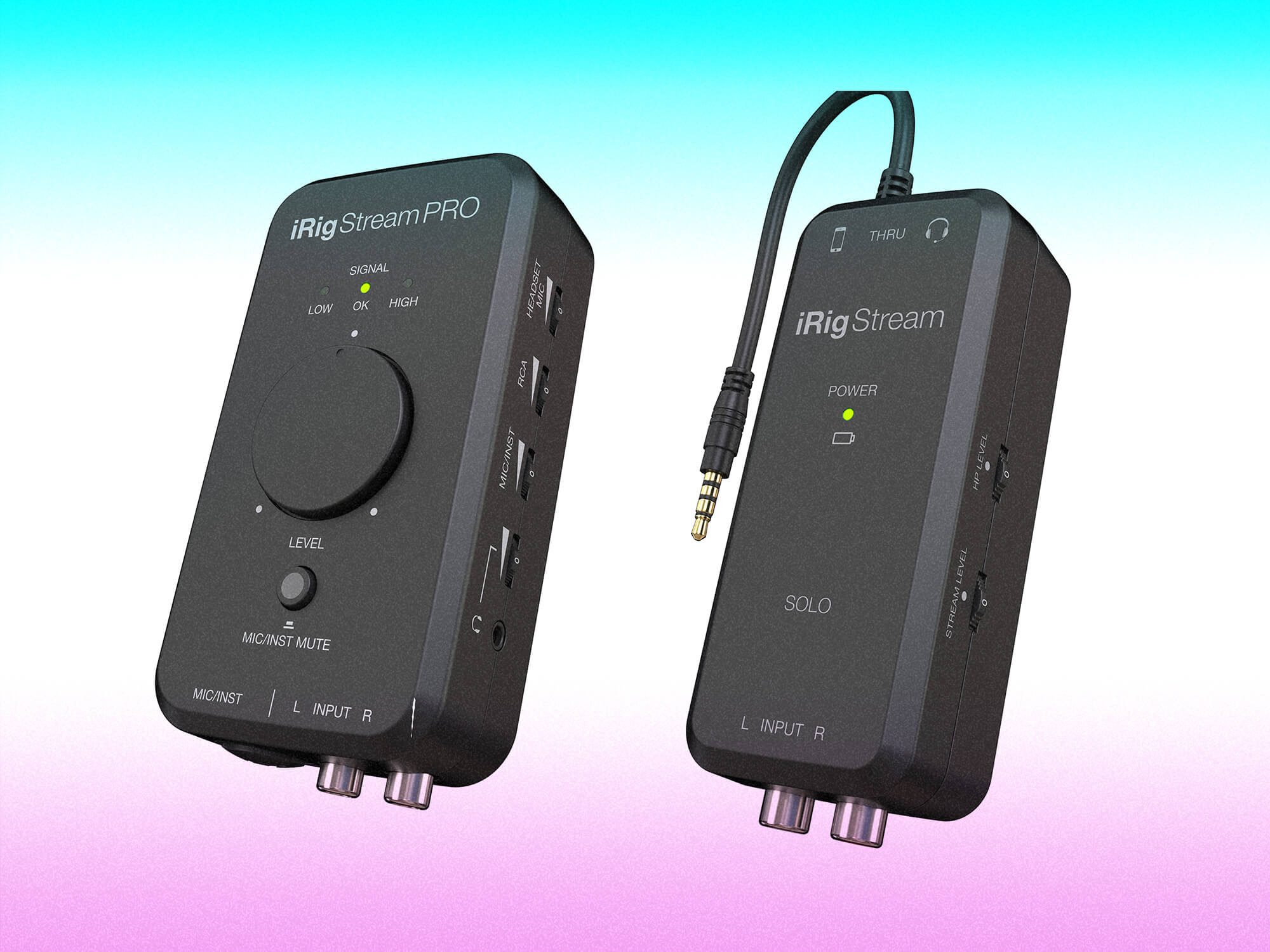 The iRig Stream Solo and Pro are highly portable audio interfaces for recording and broadcasting on the move or in smaller spaces. Streamers can look at the Solo while musicians may prefer the Pro model.


For all their processing power, today’s smartphones and tablets provide very little in the way of built-in audio inputs and outputs for those who want to record music or podcasts using apps like GarageBand or Cubasis.

IK Multimedia has been making audio interface hardware that fills this gap, and the two new members of the iRig Stream family continue that trend. The Solo is more affordable than the existing iRig Stream, while the Pro more features. Let’s start with the most affordable option.

The iRig Stream Solo costs a shade under 50 euro which, if not quite an impulse buy, certainly isn’t expensive. Lightweight but fairly sturdy with a plastic casing, it comes with the two AA batteries it needs for power and which provide around 50 hours of run time. It connects to your iPhone, iPad or compatible Android phone via a 3.5mm TRRS jack. But since most mobile devices haven’t featured a conventional headphone port for some time, you might need to add your own 3.5mm-Lightning or USB-C cable to hook the two devices up. These don’t come in the box, which presumably helps keep the cost down.

The idea behind the iRig Stream is that you can use the RCA inputs to connect a mixer, DJ setup or keyboard and also use the combined mic/headphone mini jack socket to monitor and speak over that signal – for example, broadcasting yourself performing a DJ set.

The output is sent to your mobile device in mono and can be used by apps like Instagram as part of a broadcast or recording. You can also use the “loopback” option to mix audio sent from the phone, say from a music app, into the whole signal. A “thru” port lets you send the output of the interface to an external mixer, speakers or another recording device.

While the headphone socket has a level control, the mic input is fixed at 27dB – which is slightly limiting, although you can also control the level of the stream sent to your phone.

Though relatively simple, the Solo will suit anyone who needs to record or broadcast their vocals together with another source like turntables or a CD system, and perhaps mix in audio from a phone app as well. IK says sound is sent to the device in mono because many streaming services sum down to mono anyway, though we would have liked to see a stereo option here too.

The iRig Stream Pro is a quite different proposition and also costs considerably more. Here, you get Mac and PC compatibility as well, and a mini-DIN output with three cables provided for connection via Lightning, USB-A and USB-C. It too can be powered by two AA batteries or through USB. If you are using an iPhone or iPad, charging it through an external power supply will also charge your Apple devices. Charging Android devices will vary, depending on your device specifications, it’s a far more fragmented ecosystem than Apple’s.

This larger model features up to four audio inputs. Again, you have the RCA input for a mixer or similar source, the headphone/mic input, and also a combined ¼ inch XLR combo jack for connecting a studio mic or a line level source like a guitar or bass. This has 48V phantom power capability for use with condenser mics, although we recommend using a battery or the optional power supply if you want to use it with iOS devices since it draws a little more juice.

A Loopback+ mode lets you route channels 3 and 4 through audio apps for processing, essentially using them as live effects, as well as allowing audio from your phone back into the interface. You can use this to send your guitar signal to a guitar pedal app to add effects, after which it gets mixed back in for recording.

The unit’s electronics support up to 96kHz/24-bit sound, so getting studio-quality recording is not a problem. It can output its sound either in stereo or as four separate channels, which is more useful for multitrack recording in a DAW like GarageBand. There’s a handy mute button on the top edge for temporarily cutting the mic or instrument channel, and a second headphone or line out for recording to other devices. The ins and outs have manual level controls on the sides of the casing, so you can easily control levels.

Although a member of the Stream family, the Stream Pro blurs the boundaries with the world of regular audio interfaces, some of which it is competing with at this price point. It does this by letting you connect a guitar or phantom-powered studio mic, and provides up to four-channel high resolution output in addition to working with your desktop computer as well as your mobile device.

On the other hand, it does also embrace the streaming part of its name by incorporating those features of the Solo like RCA inputs and combined headset mic/headphone socket, which allows you to hook it up and start broadcasting yourself in just a couple of minutes. For reference, the regular iRig Stream costs 99.99 euro and has similar connectivity to the Solo but is also desktop-compatible, and has no battery power option.

IK’s lifestyle images for these products give you a good indication of where they are pitching them. The Solo is more for vlogging and live broadcasting of a DJ set or other performance via a mobile device. The Pro has that covered too, but adds features like computer support, an XLR input for more serious voice recording, multichannel output and an expanded Loopback capability that allows you to use apps to process your vocal or guitar prior to recording. Both interfaces perform very well, though if your needs are modest the Solo is good value; while the Pro perhaps sacrifices what might ideally be a couple more inputs for sheer portability, given its price.