by Will Betts
#Audio Interfaces#Video
Reviews

Plugging studio mics into your smartphone and DSLR can dramatically improve the sound of your videos – and this affordable preamp allows it at an entry-level price. 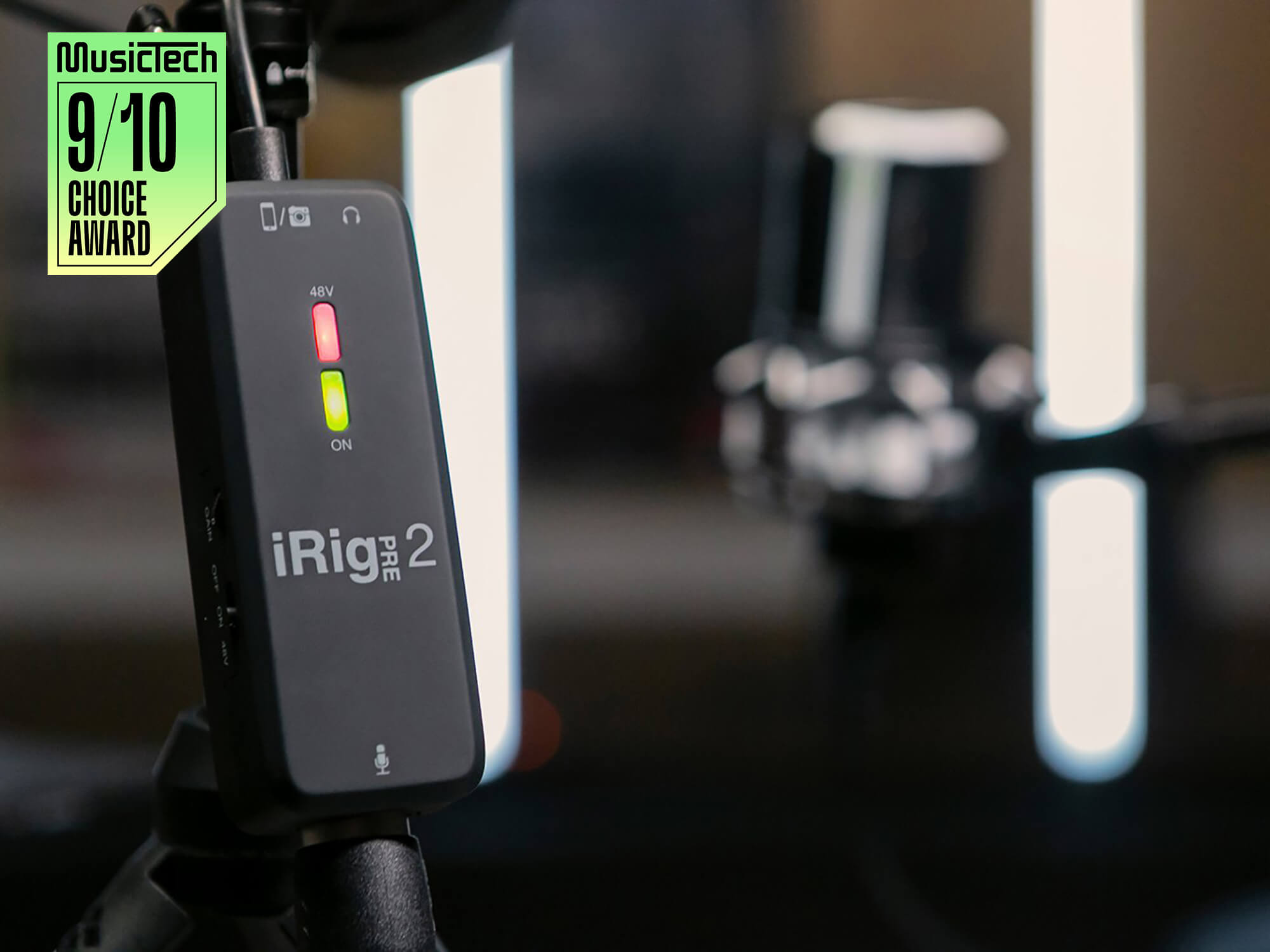 This little preamp designed for videographers is a beautiful balance of practical, robust and affordable. If you want to get mic audio into your DSLR or smartphone without fuss, this is an excellent bet.

If you’re shooting video and want great sound, it’s inadvisable to use the internal mics on your DSLR or smartphone. It’s a bit like serving a Michelin-star meal on a paper plate; it distracts from the main event. Whether you’re filming your own performance, someone else’s or the behind-the-scenes podcast, it’s better to record using a dedicated dynamic, condenser or ribbon microphone. The problem is that these dedicated mics have XLR outputs, while smartphones and DSLR cameras only have minijack inputs.

The iRig Pre 2 solves this problem neatly, affordably and for a surprisingly wide range of video devices. Whether you’re a bedroom musician, podcaster or a lone documentary maker, it allows a dramatic improvement in sound recording quality over internal mics or in-line headphone microphones. It’s a straightforward idea, but how does it sound, and how well does it perform? 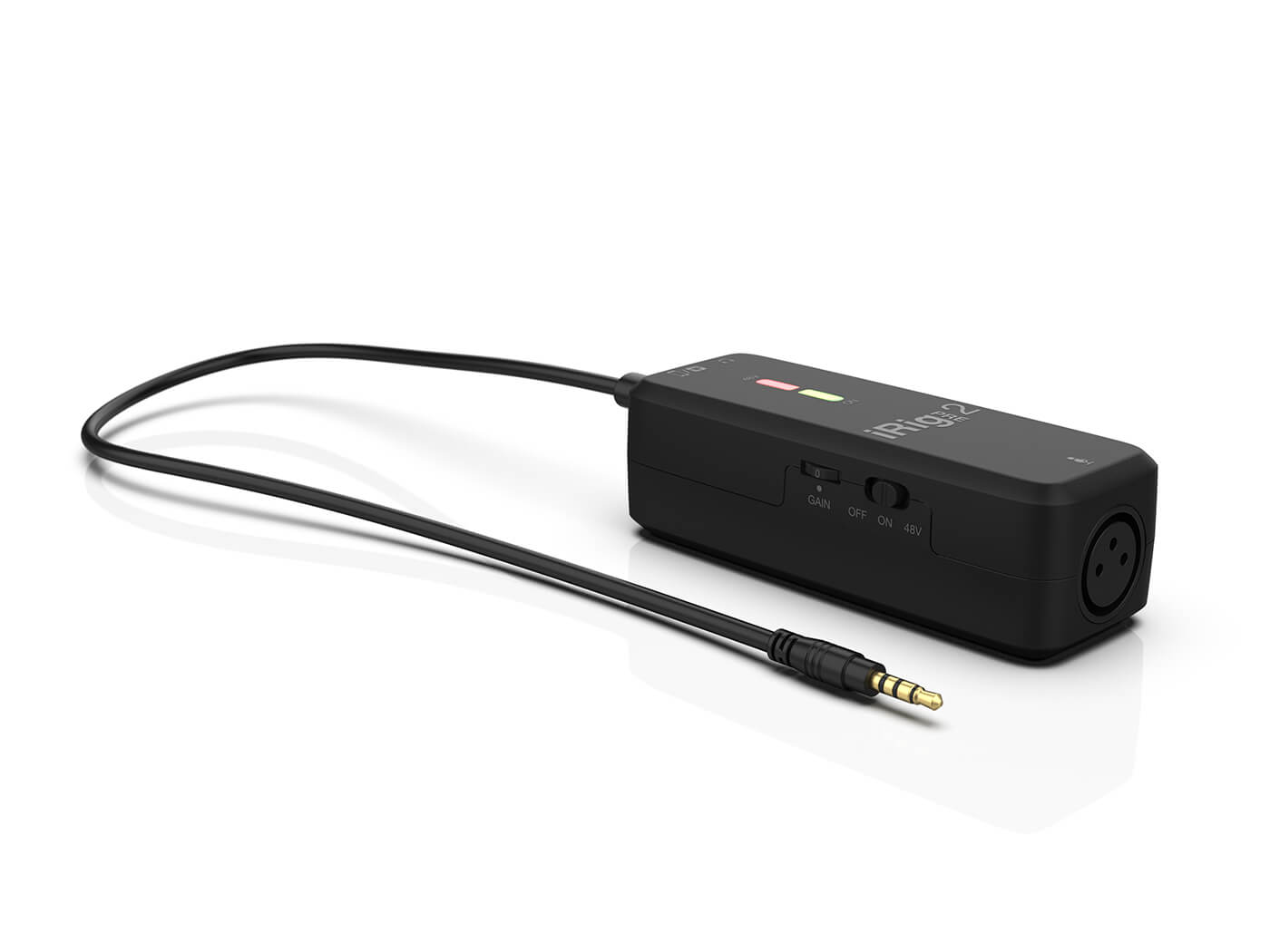 The iRig Pre 2 is made from solid plastic that’s light and robust, like most IK products. It also has a thoughtfully placed Velcro loop on the back of the device that lets you attach it to a tripod leg so it’s secured during shooting.

To connect to a smartphone or tablet, you need to buy the appropriate TRRS mini-jack to Lightning/USB-C adapter cable. But once you’ve done that, it’s smooth sailing.

The iRig Pre 2 has small numbered level wheels to adjust the input gain and headphone output. One small gripe is that because the device is most comfortable in an upright position, the mic gain wheel feels like it’s upside down. To turn up the headphones, you roll the wheel towards the top of the device; to turn up the mic gain on the opposite side, you roll downwards, which feels counterintuitive and caught us out a few times. However, you’d set mic gain before recording, not during, so this isn’t a major flaw for most applications.

The headphone output is more than loud enough and, with iPhone, iPad and Android, receives the device output so you can hear playback for recording along with pre-recorded tracks in Garageband, for example.

Having the direct monitoring option is useful too, especially when recording to smartphones which add latency. Still, there can be a bit of level balancing to do between software and hardware. 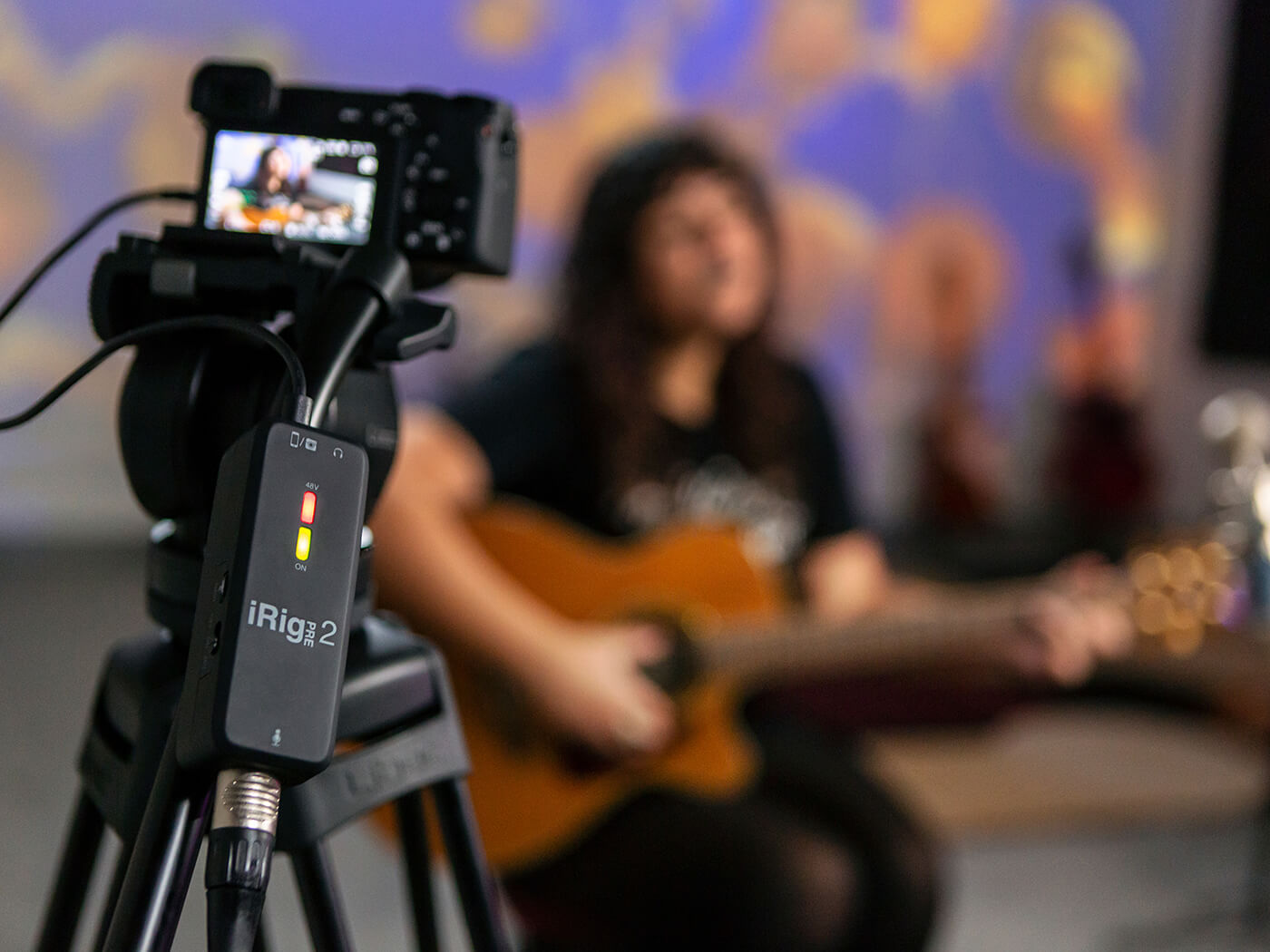 We tested the preamp with an Aston Origin condenser mic, DPA 4060 miniature condensers, a Shure SM7B dynamic (with and without Klark Teknik mic booster), a Rode Podmic and a Lewitt Interviewer mic (both dynamic).

Impressively for its price, the iRig Pre 2 delivers true +48V phantom power, not 32V, unlike some miniature preamps. This lets you fully power condenser mics and Cloudlifters for optimum sound quality.

The preamp has a surprising amount of gain, considering it uses only two AA batteries. The best results come from condenser mics positioned close to the source. The Aston Origin and DPA 4060 are both excellent. For dynamic mics – especially those with lower sensitivities such as the SM7B – it’s worth investing in a Cloudlifter (or similar mic booster) to produce quiet results with a low noise floor.

On the downside, the noise floor is relatively high when you get into higher gain settings – considerably higher than most desktop audio interfaces. However, you can get away with quieter mics if you have de-noising software such as iZotope RX that can learn a noise signature. 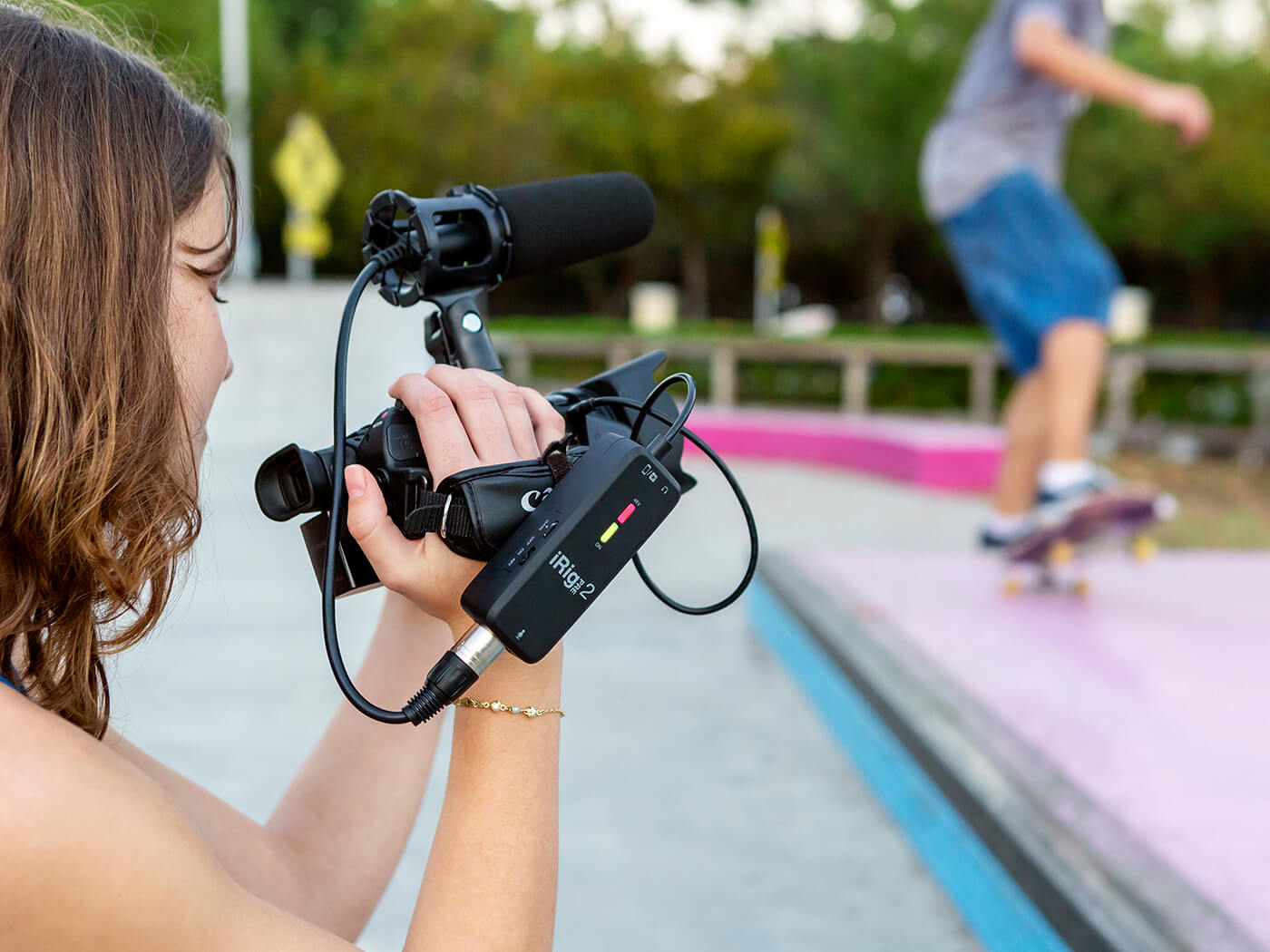 Not only does the IK Multimedia iRig Pre 2 do precisely what it sets out to, its battery last for an impressive seven hours with phantom power enabled or 22 without. And because it takes AA batteries, switching them is low-cost.

The ace up the sleeve of the iRig Pre 2 is its automatic detection of recording device. Plug it into a DSLR, and the mic signal will flow to the correct sections of the jack. The same goes for smartphones. If you have a multi-cam shoot with all these devices, you can connect it to whichever makes the most sense for your setup. If connecting to a DSLR, the only difference is you may have to monitor from your camera’s headphone out.

In short, we’d happily use the iRig Pre 2 for self-shooting vlogs or even recording performances for social media. It represents fantastic value for money and feels indestructible to boot. 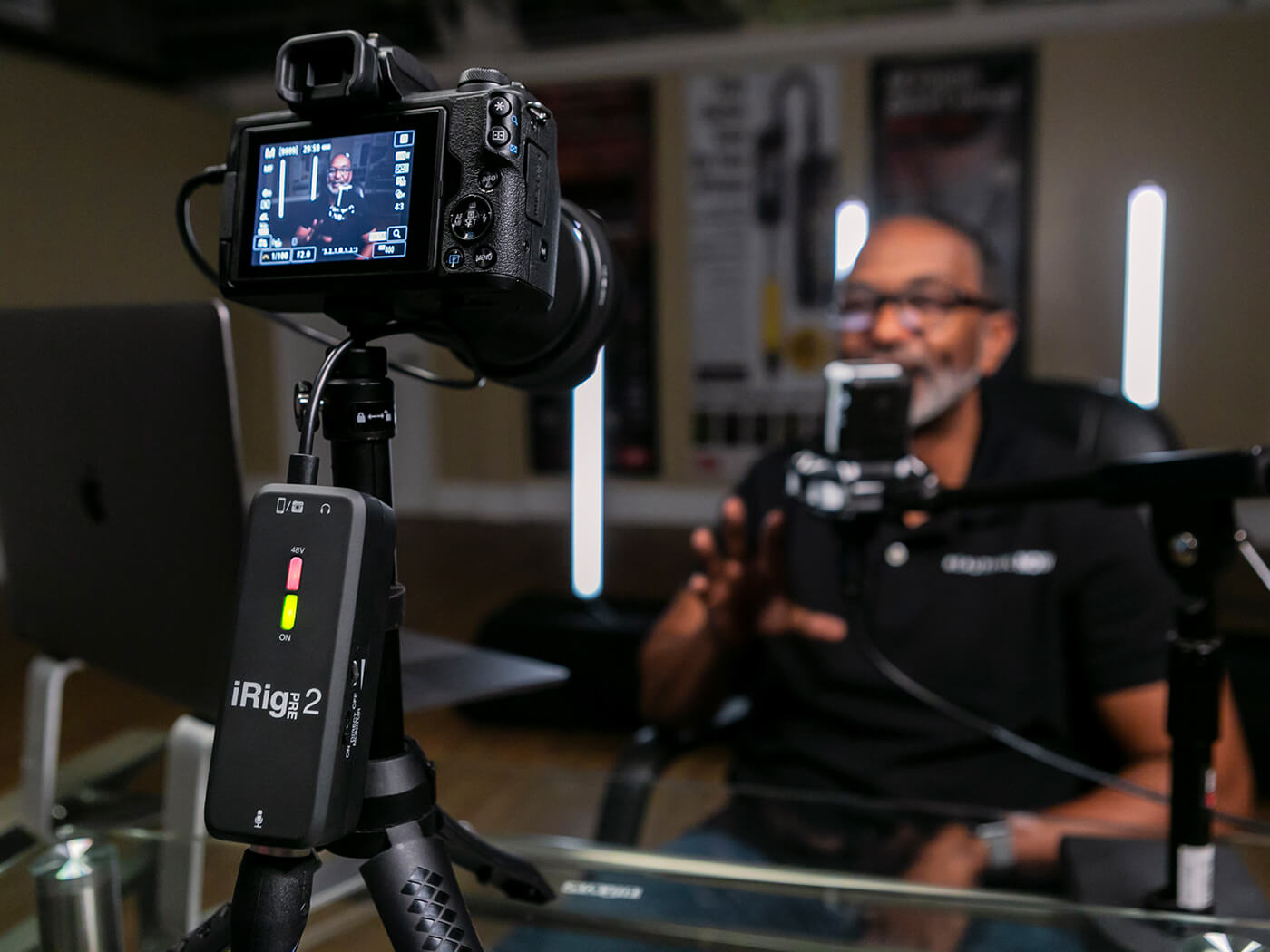