Room correction is all too easily overlooked. All-in-one solutions such as IK Multimedia’s latest iteration of ARC can revolutionise your recording space. 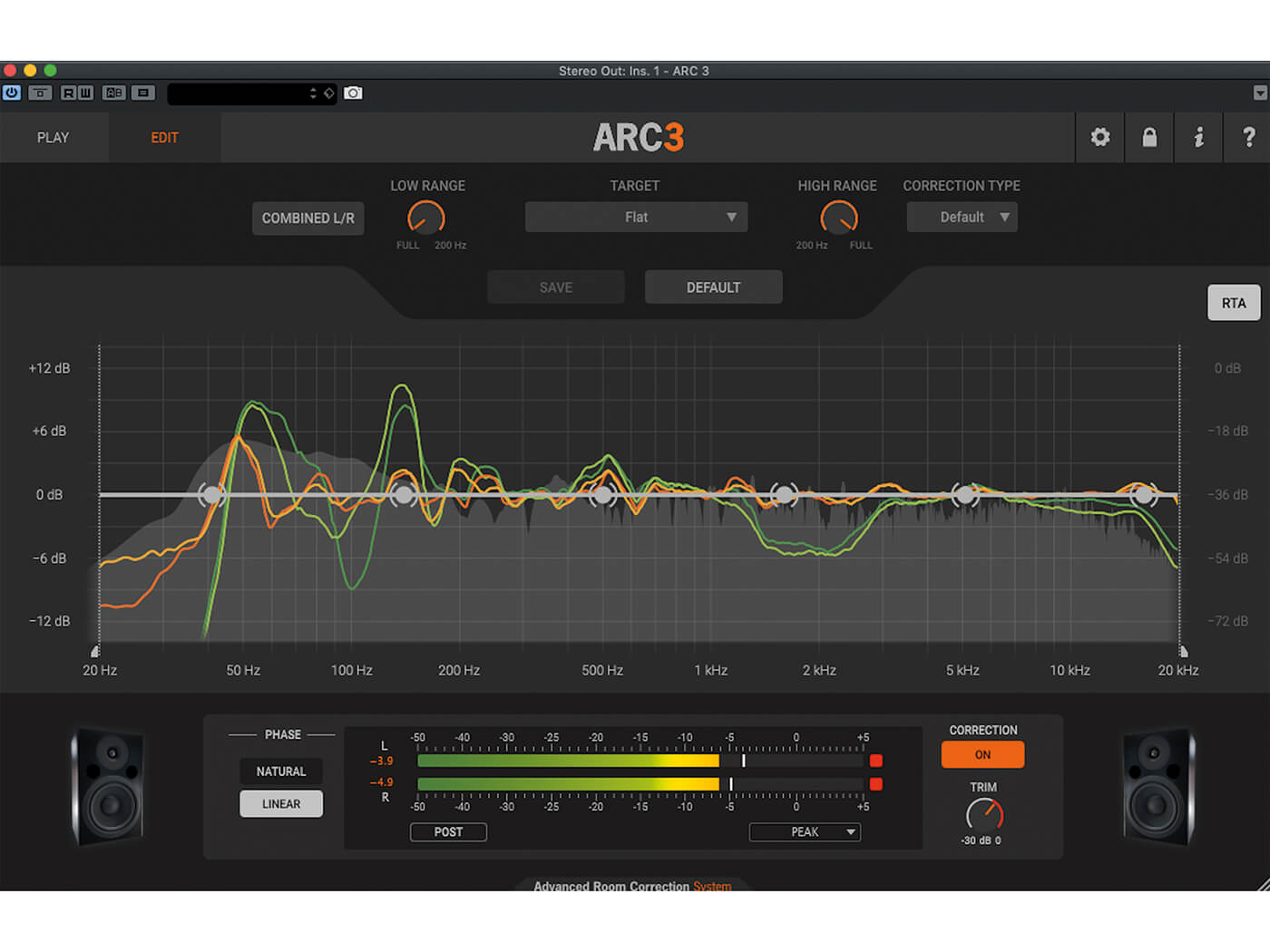 A quick question for you: what’s the single most important aspect of your studio, the thing that makes everything else possible?

That’s right. Monitoring. Your studio monitoring system is the window through which you hear everything. It’s what all your judgements are based on. If your monitoring is inaccurate, your judgements will be based on false information, and will invariably be poor decisions as a result. Should your monitors be weak in the low end, for example, you might over-boost low-end EQ to compensate, resulting in a mix that seems bottom-heavy when heard on other systems.

Accurate monitoring isn’t all about the monitors themselves though. Your room’s acoustics have almost as much impact on the accuracy of what you hear as the monitor drivers themselves. The peculiarities of the room and the materials it’s made from will cause some frequencies to be weakened while others are accentuated, and this pattern of sonic colouration will vary depending on your position as a listener. There’s a lot to think about. 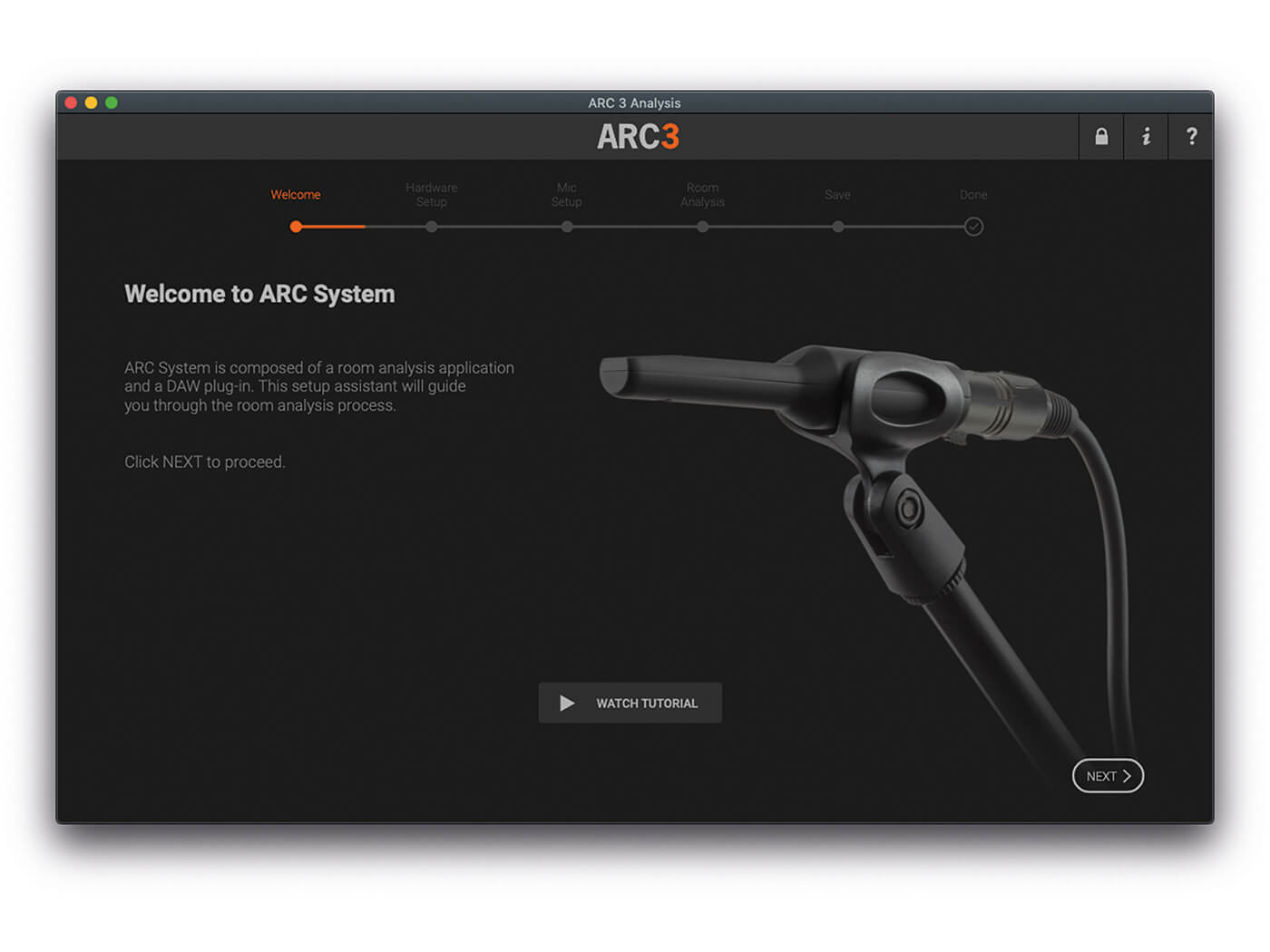 Fixing these inaccuracies involves a procedure known as room calibration. This involves playing sounds through the monitors –typically white noise and/or sine waves at specific frequencies – while capturing and analysing the results using a special measurement mic hooked up to a spectrum analyser. With the analyser revealing the frequency response at the listening position, you can tune out the inaccuracies using a 1/3-octave graphic EQ (a graphic EQ with more than 30 bands) inserted into the monitor signal path.

Performing this procedure manually is without doubt a painstaking, fiddly and time-consuming process, which is why many people reach for automated solutions. One such solution is IK Multimedia’s ARC System, recently upgraded to its third iteration.

At the heart of the ARC System 3 package are two software components: an analyser application and a correction plug-in. The analyser is used to measure the sound at the listening position, while the correction plug-in, inserted into your DAW’s main mix or monitor output path, uses that measured response to create and apply a corrective EQ curve. 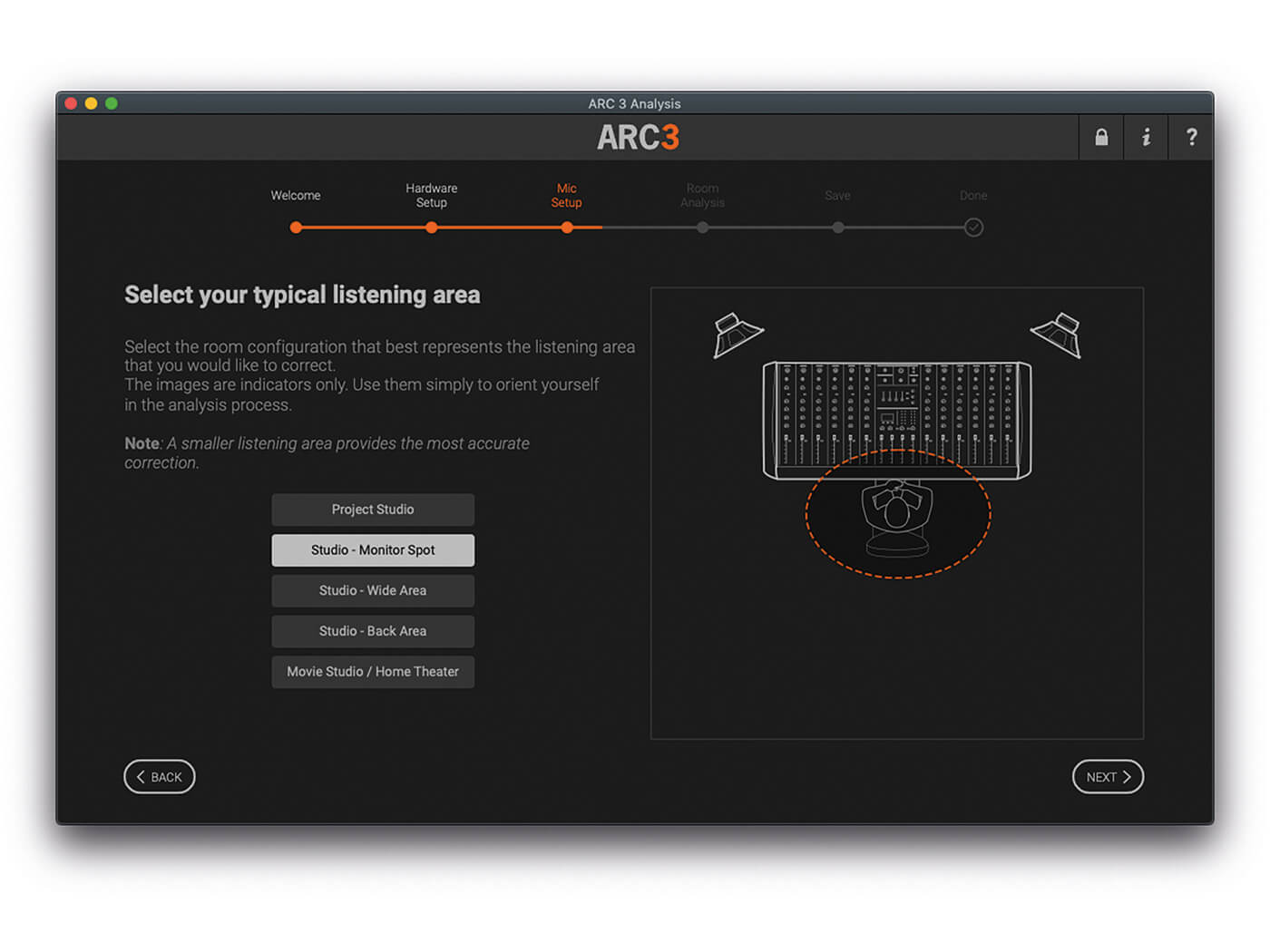 Performing an analysis with ARC System 3 is refreshingly simple, with the program leading you through the process from beginning to end. This is just as well, as the analysis takes measurements from 21 different positions. Thankfully, the software keeps you informed as to exactly where the mic must be placed. Three layers of measurement are used, the first being in the plane of the listening position, the second 15cm below, and the third 15cm above. Seven measurements are taken within each layer: one aligned to the listening position, and the others in front and behind that position.

Here, measurements are being taken from positions that describe a three-dimensional volume around the listening position, and the software is using these data points to calculate an accurate response curve. The exact shape and size of the 3D volume is determined by the type of studio (project, standard, large, etc) and listening position (monitor sweet spot, client seating area at the back of the studio, etc) you specified before starting the analysis. You can also perform multiple analyses for different positions within your studio, and choose which to use, all from within the correction plug-in.

Incidentally, one thing we particularly like about ARC 3’s analysis procedure is that it doesn’t involve being blasted with white noise the way manual analysis – and indeed many other automated systems – does. Prolonged exposure to white noise is widely regarded as a form of torture, so ARC 3’s quick ‘zap’ – a sine wave whose frequency is being ramped rapidly from 20Hz to 20kHz – is pleasant in comparison.

Ahead of the curve

The measured response curves are applied using the ARC 3 correction plug-in, which you insert into the DAW output bus that’s driving your monitors. From here, you can select the measurement to base the calibration on, as well as a target response curve. Typically, you’ll be targeting a flat response, which is the default, but you can also define up to four custom curves, which is a useful way of tweaking the response should you want to overrule the analysis or prefer to work with a bit of colouration (a flat response can sound harsh and unflattering).

You can also enable a virtual monitoring curve. This further modifies the target curve so that it results in a frequency response similar to specific types of monitor, such as classic Yamaha NS-10s, hi-fis, handheld devices and more. This is a fantastic way to get a sense of how your mix will sound on different systems and devices. All of these modifications are reflected in the response graph that dominates the plug-in’s window, and shows the source curve, target curve, and resulting response curve. 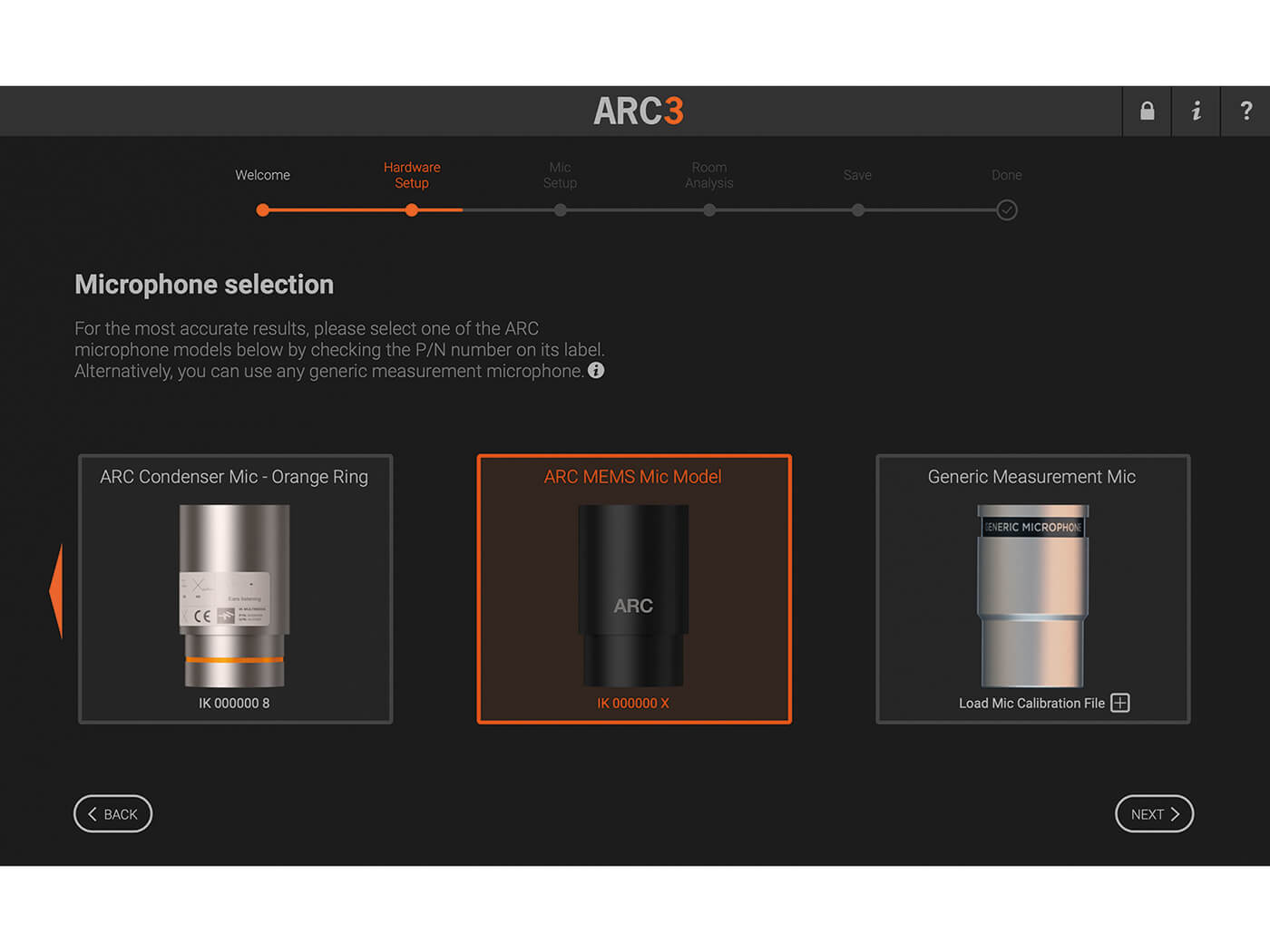 We find working with ARC System 3 a satisfying experience, and are happy with the results, which closely match our own manual calibration (and, we dare say, are probably more accurate).

Applying the correction curve in a plug-in is not without its drawbacks though, especially if you use an analogue mixing desk as the hub of your studio rather than a computer. But there are advantages to this approach too, such as being able to quickly change the calibration for different listening positions, and the ability to modify the target response curve that the system aims for.

All in all, ARC System 3 makes light work of what can otherwise be a laborious process, and does so for a reasonable price. By making the whole measurement process so easy, it ensures that even studio newcomers will have few problems measuring and calibrating their monitoring system. 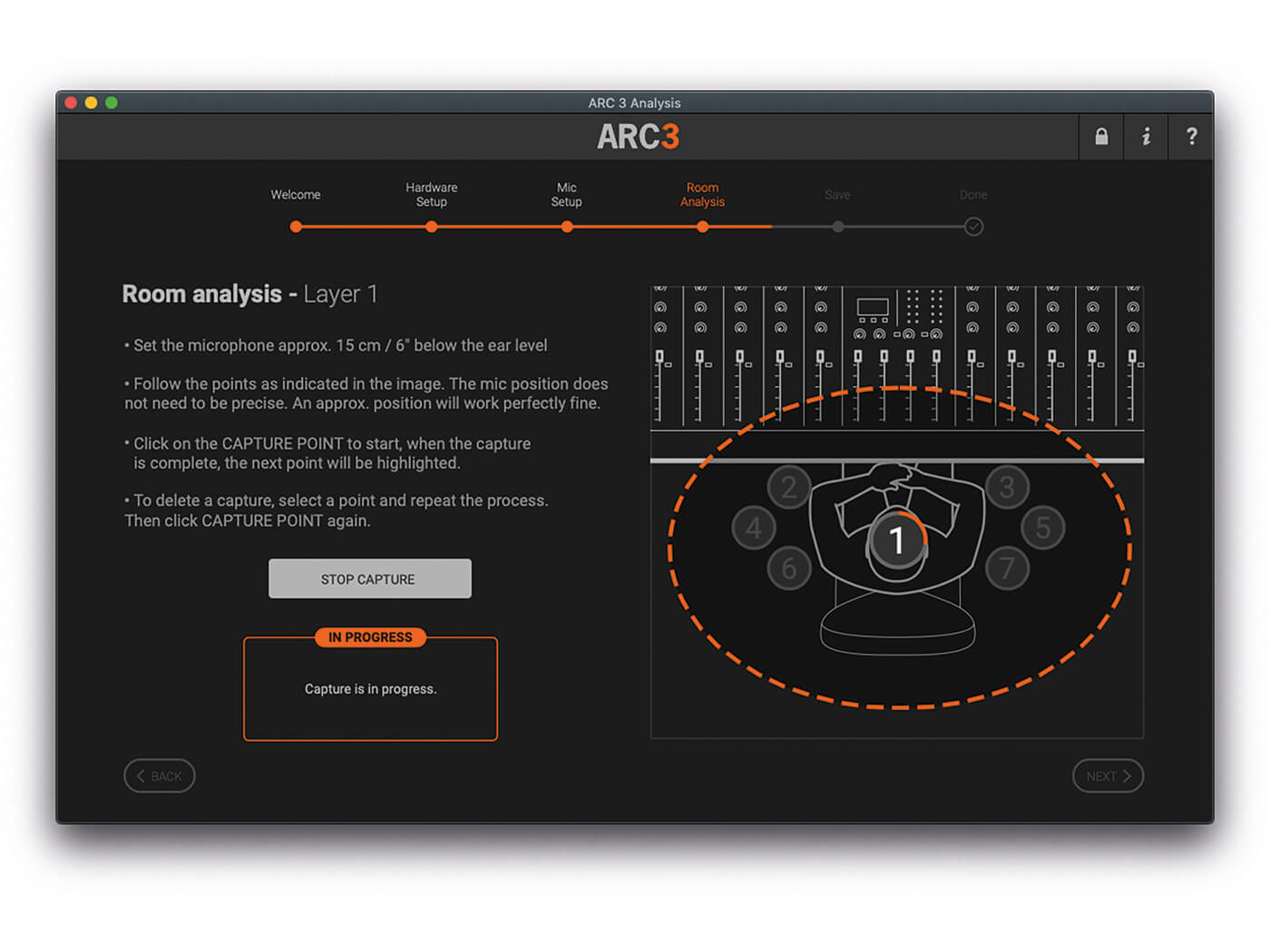 Although it’s possible to become familiar with the sound of an inaccurate monitoring environment and to then work around its shortcomings, it’s far more sensible to get things right from the outset, and to be able to trust in what you can hear. This is especially important when mixing and mastering but can help you to avoid poor decision-making during tracking and editing too.

There’s no aspect of studio work that doesn’t benefit from accurate monitoring and room calibration. ARC System 3 is one of the simplest possible solutions. It’s certainly easier than manual calibration and, in most cases, will prove more accurate. It’s also cost-effective, especially when you consider that it should ensure improvements across all of your recording activities. A worthy investment, then. 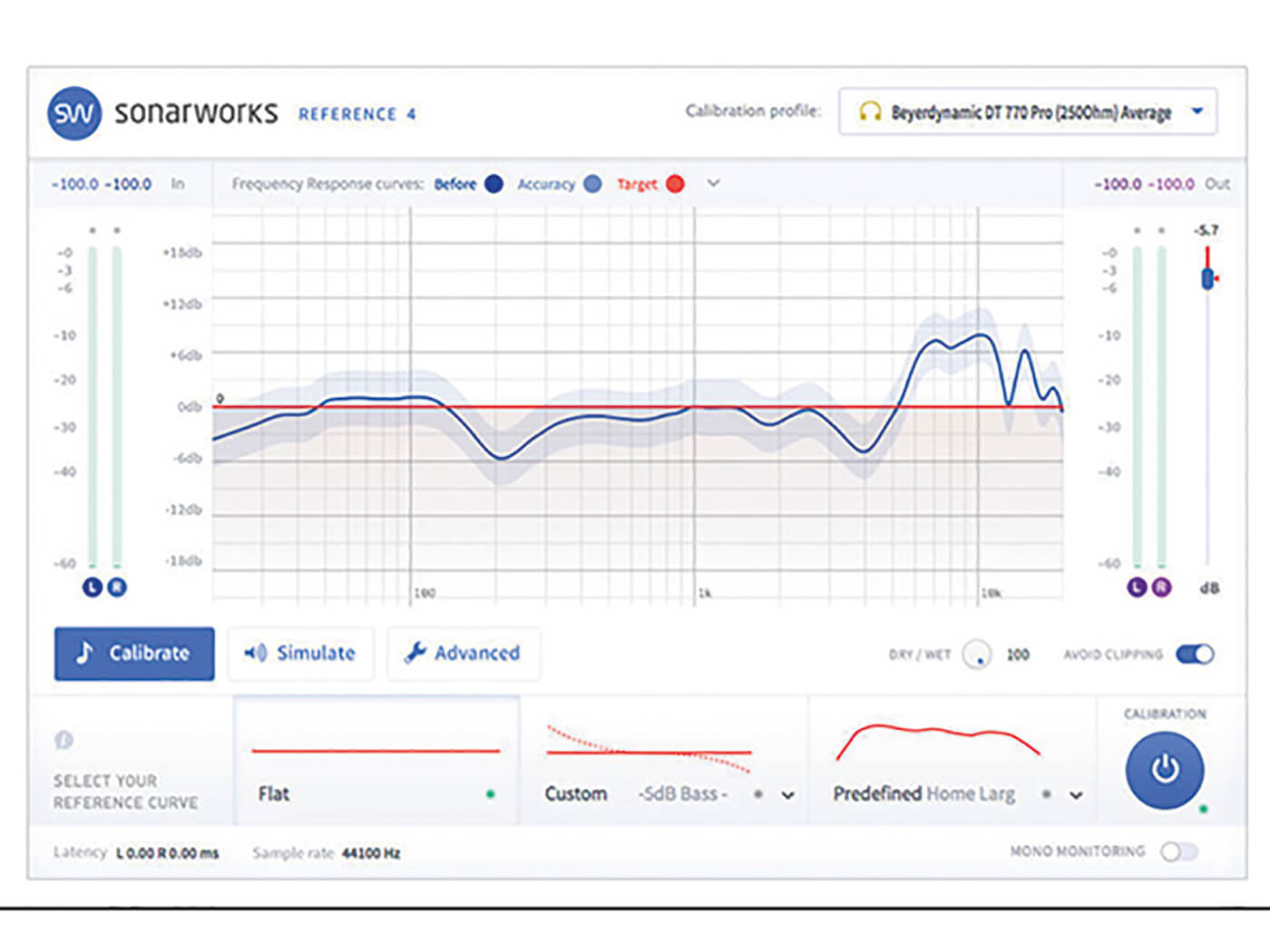 This solution can be bought with or without the accompanying measurement mic, and uses up to 37 measurements taken from your room. It can apply the resulting correction curve via a plug-in in your DAW, as well as to your computer’s system-level audio via its Systemwide software. 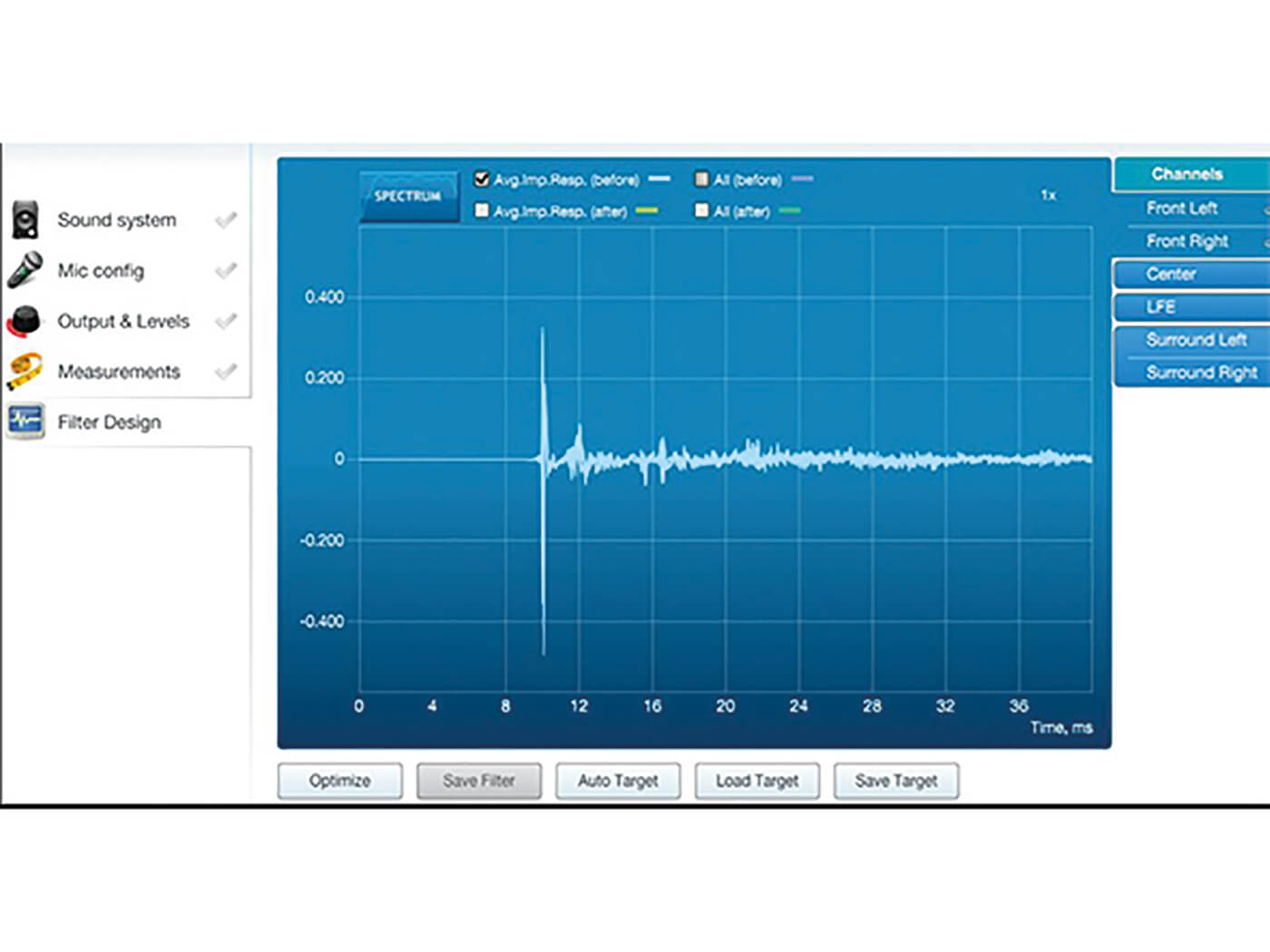 Dirac is a big player in the audio-correction world, with products tailored for high-end home hi-fis, in-car systems and, of course, the studio. This software corrects both frequency and timing inaccuracies, and can improve both the frequency response and imaging accuracy of your monitoring system.